Unfortunately, most of NYC’s beautiful buildings date to between 1850 and 1940, the castiron, Beaux Arts and Art Deco-Art Moderne periods. Thereafter, minimalism took hold with the International Style’s glass boxes, which have become the rage now in tall residential towers. Ironically I’ve always loved Frank Lloyd Wright’s streamlined designs that looked toward the mid-century forms, but they were done with an idiosyncratic style no one else has ever matched.

What did streamlining eventually bring us? Fedders buildings. A recent stroll down Broadway from Waverly Place to Canal Street shows us some more structures from an era when architects attempted to uplift the spirit instead of providing worker storage….

Broadway, in this area, has undergone a complete personality change. For decades it was home to fabric and machinery wholesalers and manufacturers, backbones of NYC industry. Manufacturing has largely disappeared from the NYC scene and Broadway is now home to upscale boutiques (and some moderately-priced stores) and pricey residences. Your webmaster could be found here once a month from about 1985-1995 carting out a yellow and red bag full of 33 1/3 RPM albums and later compact disks purchased at Tower Records on East 4th Street, which recently succumbed to the digital music revolution in which music is purchased online via iTunes or Amazon or pilfered from sites like Limewire. The classic architecture, though, is largely still there.

678 Broadway, between Great Jones and East 4th, was built in 1874 by brothers David and John Jardine for General Thomas Davies, who helped build the Croton Aqueduct. Perhaps the Jardines’ most well-known buildings were a pair of 5-story arch-windowed cast iron towers that faced each other across Thomas Street at Broadway. The one on the south side was torn down in 1971, but the one on the north side is still there and boasts a brilliant white paint job.

666 Broadway at Bond Street was numbered long before the 1976 horror movie The Omen popularized the Biblical interpretation of 666 as symbolic of Satan. It is presently the home of Harper’s Magazine, the oldest monthly in the USA.

654 Broadway (center, cream) was built in 1882 and housed publisher Charles Scribner’s Sons. Note how every floor is shorter than the one below it. 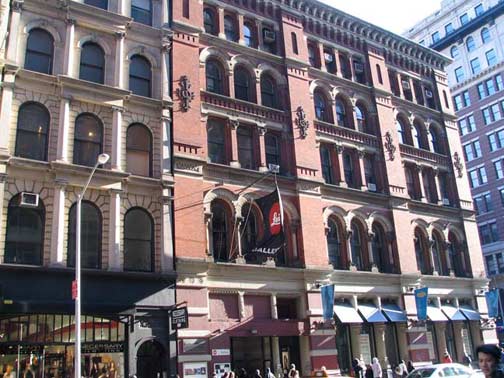 670 Broadway, across Bond, is now home to galleries and fashion boutiques. It was the 4th Brooks Brothers store, constructed in 1874 on the site of the Samuel Ward residence. His daughter Julia Ward Howe wrote Battle Hymn of the Republic, setting new words to the music of John Brown’s Body.

Brooks Brothers celebrates its 193rd anniversary in 2011. Abraham Lincoln wore a Brooks Brothers coat to Ford’s Theatre in Washington, DC the evening of April 14, 1865, the night he was assassinated.

Originally the Manhattan Savings Institution (hence “THE MSI” on the facade) 644 Broadway at Bleecker was built of brownstone and cat-iron trim in 1890 by architect Stephen D. Hatch.

The building was in serious disrepair after years of neglect and in 1987 there was a complete restoration and conversion to residential loft apartments (known as the Bleecker Tower), already fetching millions of dollars in the late 1990s. It is alternately called the Atrium Building (not to be confused with The Atrium at 160 Bleecker), after clothing retailer Atrium who now occupies the ground floor. NY Daily Photo 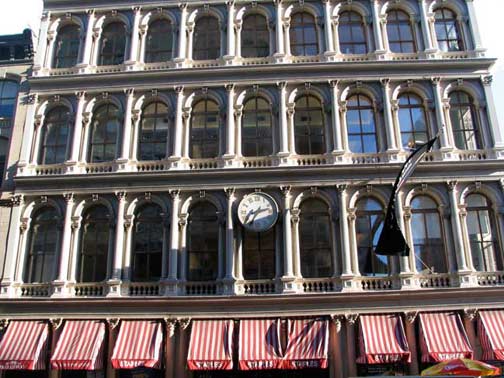 488 Broadway at Broome Street, the Haughwout (pronounced HA-wout) Building. Some architectural experts call it the most beautiful castiron building in NYC. It has competition there especially in Soho, but this is certainly one of the more massive ones. It is among the oldest: it goes back to 1856, when the castiron movement begun by James Bogardus was just taking hold. The architect was John B. Gaynor and the original owner, Eder V. Haughwout (there aren’t anynames like that nowadays, either). He was an importer of table and glassware who supplied china to the White House and exhibited at the ill-fated Crystal Palaceat what would be Bryant Park in 1853. This was his showroom and retail store until 1869; thereafter it was home to a succession of wholesalers. These days, the ground floor houses one of the ubiquitous Staples locations.

The exterior presents a stately succession of arched windows on the top 4 floors, each consisting of 2 Corinthian columns with another Corinthian in between.

This basic window unit is repeated 92 times on the two façades, one facing Broadway and he other facing Broome Street (above). There are 4 tiers of each of these arches, one above the other, each supporting a full entablature that runs around the two sides, giving a strong horizontal line at every floor. Cast-Iron Architecture in New York, Margot Gayle and Edmund V. Gillon Jr.

I haven’t been inside the building but among its other attributes is the poresence of the very first Elisha Otiselevator. Architect Gaynor also placed the first elevators west of the Mississippi in San Francisco’s Palace Hotel.

The big clock on the Broadway side has been stopped for some time. I don’t know if it was originally part of the building.

The Haughwout Building was, in the early 1960s, in the gunsights of traffic czar Robert Moses, who wished to build the Lower Manhattan Expressway along Broome Street to connect the Williamsburg and Manhattan Bridges and Holland Tunnel. An elevated expressway would have been erected over Broome and all the buildings on its north side would have been torn down to accommodate the expressway’s width. For a variety of reasons that included the staunch opposition of coalition of activists and neighborhood residents, however, the massive project was stalled and finally demapped in 1969 even though some of the approaches near the Manhattan Bridge, and an underground approach at Broome and Chrystie Streets, had already been started. Soho, then a depopulated, nearly deserted area, would subsequently flourish, though mostly for the higher-incomed.

In August 2005 I walked the Soho Castiron District and shot a few dozen pictures of the wonders found there; I haven’t had time to post them but hopefully will sometime in 2008. Three of the Haughwout pictures were done that day.

The architecture of the FLATBUSH TRIANGLES