Holy Hoya! I was walking through gorgeous Georgetown, DC in December 2007 when I stumbled on an extant streatch of trolley tracks, complete with bricked pavement, on O Street…and again, a block north on P Street.

A revelation to your webmaster…in New York City, most traces of our trolley legacy are routinely covered by asphalt or resolutely ripped up. Fiorello LaGuardia, influenced by the big auto makers, genuflected to the internal combustion engine and set about eradicating NYC’s streetcar routes, and the last to go, in Brooklyn, expired in 1957. Yet, a few blocks in Georgetown have resolutely kept these tracks in place as a reminder of the streetcars that ran here until the early 1960s.

Washington’s streetcar system in 1888. At the time, five streetcar companies provided service in the city, but many more have existed throughout the Washington DC and surrounding areas in Maryland and Virginia. The green lines on the upper left are in Georgetown, and the loop on the extreme left is preserved today.

The company that ran trolleys in Georgetown was the Metropolitan Railroad Company, incorporated July 1, 1864, and tracks reached Georgetown in 1876. 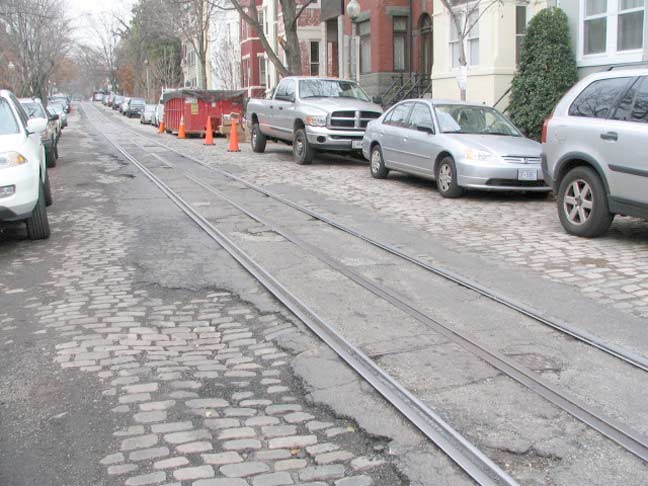 Note the third “track” in the center. It is not a track at all, but a conduit. A sliding “shoe” on the underside of the trolley carriage ran along this conduit and took electric power from an underground source along the rail. The Metropolitan, acting on a charge from Congress, began conversion to underground electric power in 1895 and all Metro lines had complied by 1897. Other lines in town used overhead trolley wire and some even used cables, as in today’s San Francisco streetcars.

The underground conduit was the preferred method in Manhattan as well, where there were cable cars and then streetcars taking underground power but never overhead trolley wire.

Much of the track in D.C. was removed and sold for scrap. The complex trackwork on Capitol Plaza in front of Washington Union Station was removed in the mid-1960s and the Pennsylvania Avenue NW trackwork between the Capitol and the Treasury Building was removed during the redevelopment of that avenue during the mid-1980s.

In other places, the track was buried under pavement. The loop tracks of the former Capitol Transit connection, behind the closed restaurant on Calvert Street NW, immediately east of the Duke Ellington Bridge, are extant under asphalt. The tracks on Florida Avenue also exist under pavement (as evidenced by the eternal seam above the conduit). Tracks also exist under Ellington Place NE, 3rd Street NE and 8th Street SE among others.

The only remaining visible tracks and conduit in the region are in the center of the cobblestone streets of Georgetown, specifically the 3400 through 3700 blocks of P Street NW and O Street NW. [wikipedia] 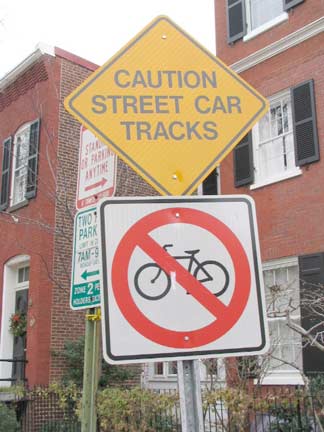 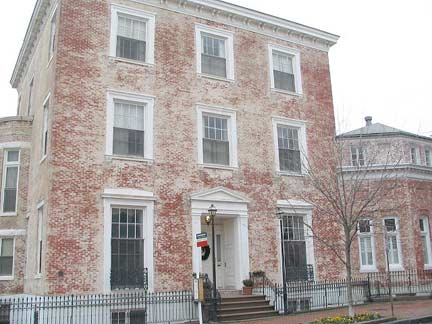 Georgetowners seem ambivalent, if not hostile, about these relics of the trolley era. Molly Creedon in Georgetown Voice:

The mere existence of the tracks on O and P St. reveal a political dynamism at work in Georgetown. People are livid that they endure. They argue they are dangerous, unattractive and without historical importance. They’ve had meetings about them and drafted petitions for their removal. The more I spoke with people about what to do with the tracks, the more I found myself an unlikely participant in a local battle packed with all the scandal, hearsay and gossip of a controversy on the Hill. I sat in stuffy Georgetown living rooms with penny loafer-clad men who had made post-retirement careers out of a dedication to either the tracksí preservation or their eradication. I endured the suspicious stares of the librarian as I excitedly dug through dusty documents at the Georgetown Public Library. I spent hours at the National Trolley Capital Museum in Colesville, Maryland, perfecting camera close-ups of trolley maps and photos. I interviewed grown men who still play with train sets and others who told me with straight-faces that these are the “last remaining conduit tracks in the world”, as if revealing the identity of Biggie Smalls’ assassin or the location of Holy Grail. I knew I had officially lost it when I experienced unparalleled happiness at the discovery that a local journalist had an audio recording of passengers on a D.C. trolley. “Cool,” my roommates responded when I told them the news. “Neat.” 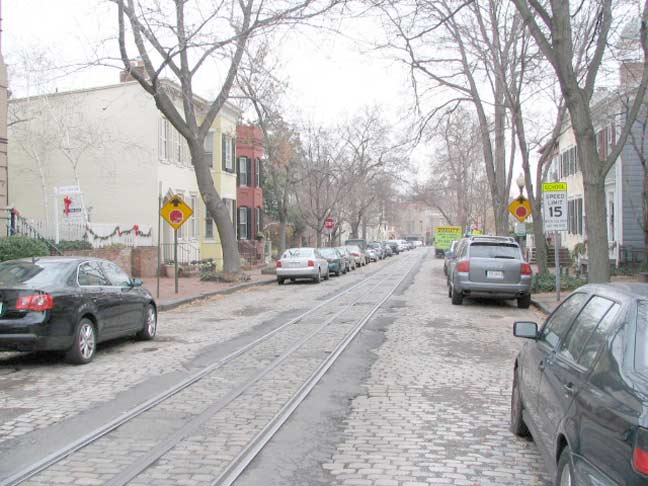 Ohhh Molly. Let me introduce you to Foam Central, otherwise known as SubChat, in which grown men (and the ratio is 98% men) in the NYC metropolitan area obsess about subways, to the exclusion of work, livelihoods, women. There are guys with Asperger’s who actually climb into idle trainsets and take them for spins. There are men who do nothing but ride the trains and stare out the front windows.

Now, your webmaster isn’t that obsessed, or not enough that I don’t occasionally wander abandoned railroad trackways. Or occasionally working trackways…

LAST ROUNDUP at the CHEYENNE DINER