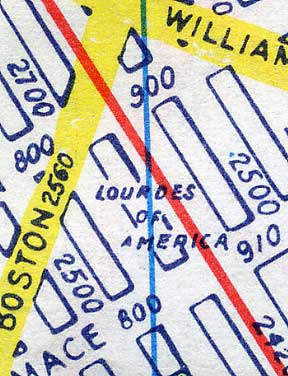 In January 2008 I was perusing an old Hagstrom map (yes, I do that for fun). The old Hagstrom, before the company digitized the entire NYC map, preserved some archaisms and oddities that are often worth investigation.

For example, in the Bronx (either in Allerton or Bronxdale; it’s on the borderline) at Mace and Bronxwood, I spotted the notation “Lourdes of America.” Grabbing the camera, I sped thence… 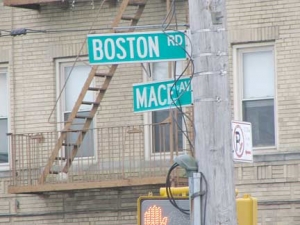 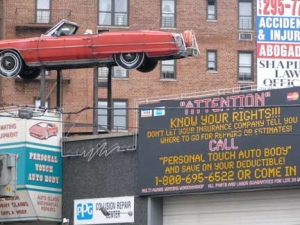 Alighting from the #2 train at Allerton Avenue and White Plains Road I made my way to Boston Road and Mace Avenue. Boston Road, as US #1, does in fact go to Boston, although it is not part of the original Boston Post Road.

According to the late Bronx historian John McNamara, it instead is an offshoot of the original such road, which traversed today’s neighborhoods of Norwood, Williamsbridge and Wakefield. Lewis Morris, of the landholding Morris family, wished to route the post road through his manorlands and hired John B. Coles, who constructed a bridge across the Harlem River and a road pointing northeast that was originally called Coles’ Boston Road but later became the Bronx’s Third Avenue and Boston Road.

As we can see here on Boston Rd. and Mace Avenue, the old route is dominated by car repair shops and gas stations, as well as illustrating Bronx’s reputation as the Borough of Apartment Houses. 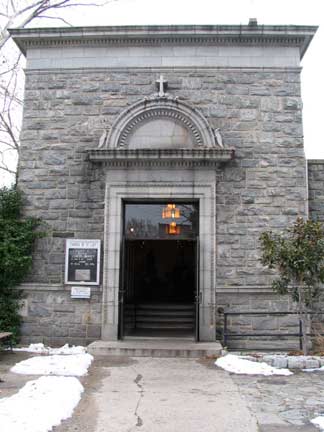 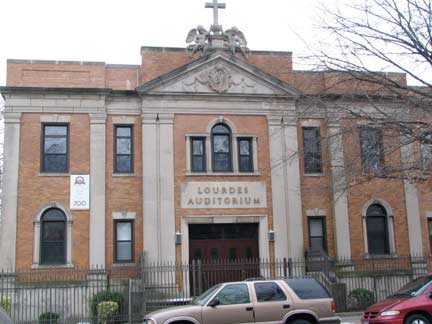 Making my way to Mace and Bronxville, I located the ashlar-bricked Church of St. Lucy, completed in 1928, and the Lourdes Auditorium across the street… 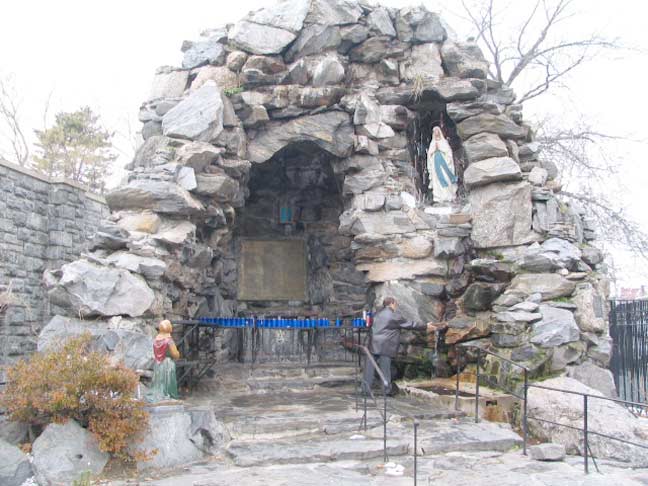 …and what’s likely the closest I’ll ever come to the Sanctuary of Our Lady of Lourdes, known to its many pilgrims from the world over as The Domain.

In brief, on February 11, 1858, 14-year-old Bernadette Soubirous (1844-1879), the daughter of a miller in Lourdes, France (near the Pyrenees and the Spanish border) was out gathering firewood with one of her sisters and a family friend when she had the first of 18 visions of Mary, the mother of Christ, in a grotto just outside town. During the ninth visitation, Aquerò (“the Lady,” as Bernadette referred to Mary) performed the first of several miracles:

…the lady told Bernadette to drink from the spring that flowed under the rock, and eat the plants that grew freely there. Although there was no known spring, and the ground was muddy, Bernadette assumed the “lady” meant that the spring was underground. She did as she was told by first digging a muddy patch with her bare hands and then attempting to drink the brackish drops. She tried three times, failing each time. On the fourth try, the droplets were clearer and she drank them. She then ate some of the plants. When finally she turned to the crowd, her face was smeared with mud and no spring had been revealed. Understandably, this caused much skepticism among onlookers who shouted, “She’s a fraud!” or “She’s insane!” while embarrassed relatives wiped the adolescent’s face clean with a handkerchief. In the next few days, however, a spring began to flow from the muddy patch first dug by Bernadette. Some devout people followed her example by drinking and washing in the water, which was soon reported to have healing properties. wikipedia

According to the Lourdes Medical Bureau, 67 cures have been effected in individuals who have come in contact with the spring, after “rigorous scientific and medical examinations” failed to discover any other possible cause for them.

The vision further directed Bernadette to “tell the priests that a chapel is to be built here,” and after Bernadette’s request for identification, replied “I am the Immaculate Conception.” In 1854 Pope Pius IX had begun to widely disseminate the concept of immaculate conception in which Mary and Jesus were conceived without original sin. The doctrine was not well-known to most Catholics at the time.

The Lady’s request was fulfilled, and the Sanctuary of Our Lady of Lourdes presently is host to over 5 million pilgrims yearly. 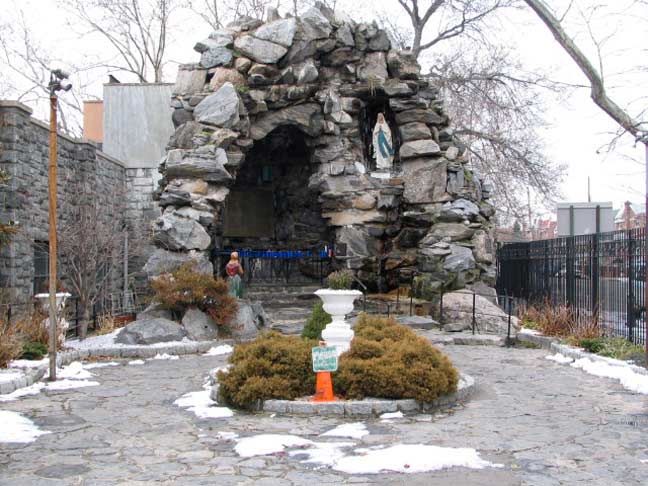 The Bronx’s own Lourdes shrine was instituted by Msgr. Pasquale Lombardo, the founder of St. Lucy’s, in 1932, after he had visited the French shrine; inspired, he vowed to build a replica here in the Bronx. It was completed in 1939 and has become known as “Lourdes of America” over the decades, though shrines in Chimayo, NM and even the Exedra in Flushing Meadows-Corona Park in Queens, the site of the Vatican Pavilion in the 1964-65 World’s Fair, have laid claim to this title. 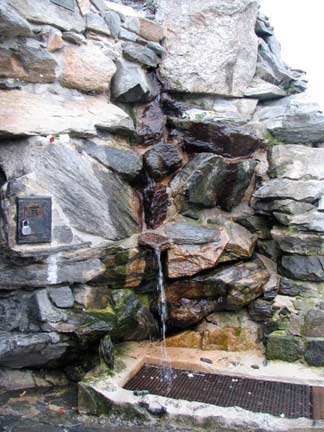 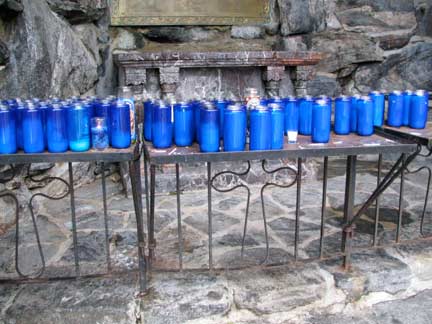 Tens of thousands of visitors have come to the Bronx version of Lourdes. The waters here are supplied by the city water supply and St. Lucy’s pastors have been quick to remind one and all of this fact, but believers cite stories of cures effected from Lourdes of America… 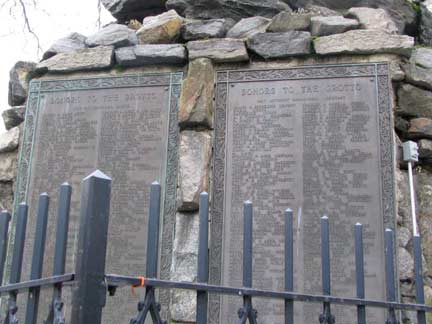 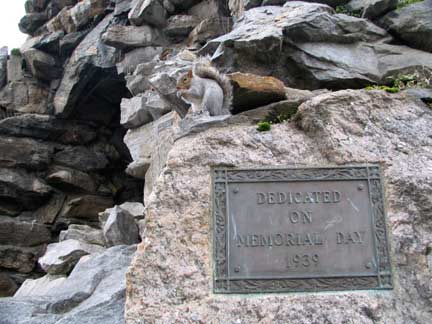 As any New Yorker knows, the city’s water is good, but this water is even better. It flows over the rocks of the Lourdes of America, a religious shrine at Saint Lucy’s Roman Catholic Church in Williamsbridge.

Tucked atop a stone ledge inside the half-dome sanctuary hewn of rough, gray rocks, a white statue of the Virgin Mary looms above the throngs of the faithful who come to the Bronx shrine to say a prayer or gulp down a mouthful of the water, seeking relief from maladies both physical and spiritual.

Some worshipers come clad in burlap shirts and traverse the flagstone path on their knees, in fulfillment of a vow for an answered prayer. Sometimes shiny new cars are parked on the street outside, while their owners haul buckets of water from the grotto to the curb, washing the vehicles in a ritual that is more important to them than any dealer preparation.

Mrs. Ramos visits once a month, filling jugs of water to take home and share with her sister, who she said has not had a recurrence of her medical problems since she drank the water seven years ago. 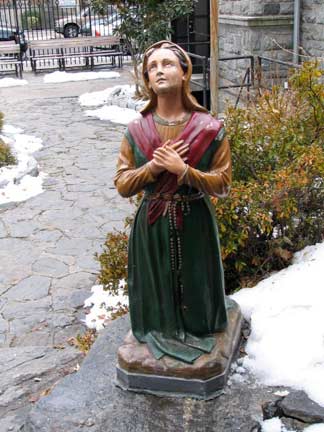 “I always drink the water,” Mrs. Ramos said one recent morning. “We bathe in it and wash the floors with it, too. When you have faith, miracles are possible.” NYTimes 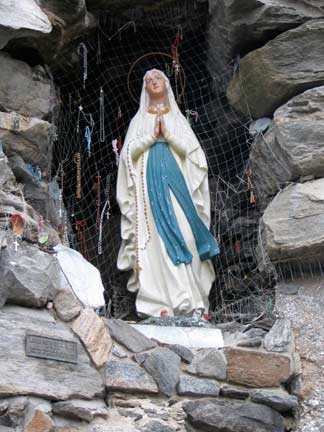 The figure of Mary wears the same blue and white gown and rosary that according to Bernadette, “the Lady” wore during her visions in 1858. 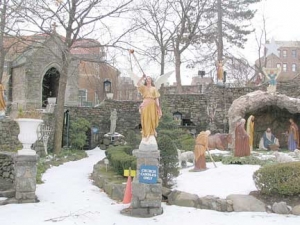 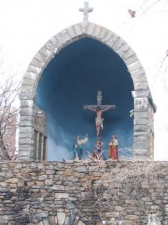 Meanwhile, Msgr. Lombardo was not content merely to construct a hommage to the Sanctuary at Lourdes here at St. Lucy’s. He went on to build a replica of the Holy Stairs (Scala Sancta) in Rome, according to Church tradition the 28 steps that Jesus Christ ascended in Jerusalem to the praetorium of Pontius Pilate and brought from Jerusalem to Rome in the early 4th Century by St. Helena, mother of Roman Emperor Constantine the Great.

Unfortunately the St. Lucy Holy Steps are closed during winter months so I was unable to get much closer. Basically the steps wind around on the rear of the lot, leading to a Crucifixion scene, lined with statues of trumpet-blowing angels. In the Christmas season there is a creche, shepherds and Magi.

Lourdes of America is open to the public during the day year round, while the Scala Sancta are open during spring and summer months. You’ll never forget the grotto once you see it.

More on the shrine: