I did a story on FNY the other day about the changes befalling Manhattan’s largest Belgian-blocked surface, the huge plaza where Greenwich, Gansevoort, Little West 12th Streets and 9th Avenue all meet — a changing of the guard, so to speak, of Manhattan street patterns — and, as is my wont I touched upon the fate of a Type 24M Corvington that listed to the side for a few years, illuminating the plaza, before giving up the ghost, replaced by a new retro-bishops crook.

In 1978 even the color photos were sepia-toned, the Meatpacking District was a place where meat of all types was still packed, the Westron Corporation and Spectronic Laboratories toiled away in what was formerly the Edward Ermold Company building, and our Corvington still had its 1940s bell luminaires, as well as yellow and black Manhattan street signs. 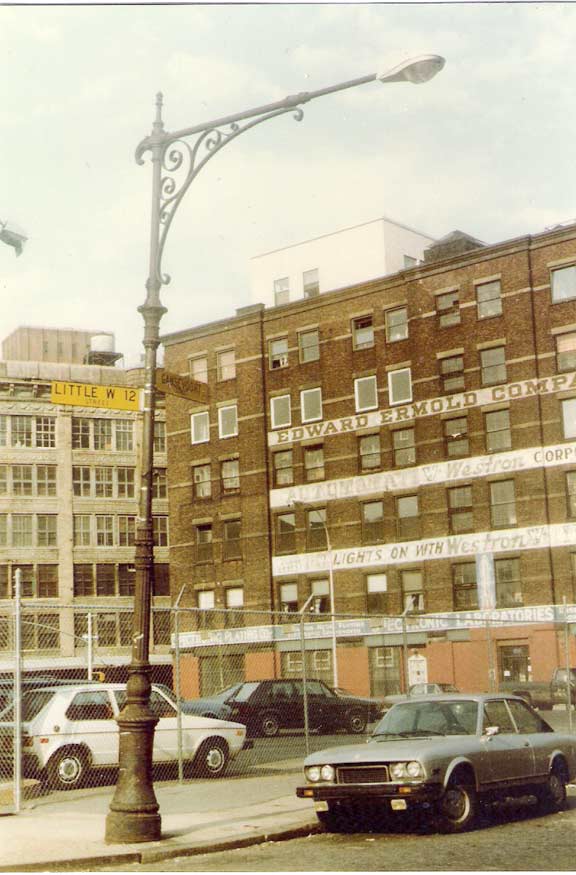 By 1984 things were a little more regimented, as a chain link fence has appeared around the parking lot and, horrors, the bell has gone and a modern bright-yellow sodium vapor lume has shown up. 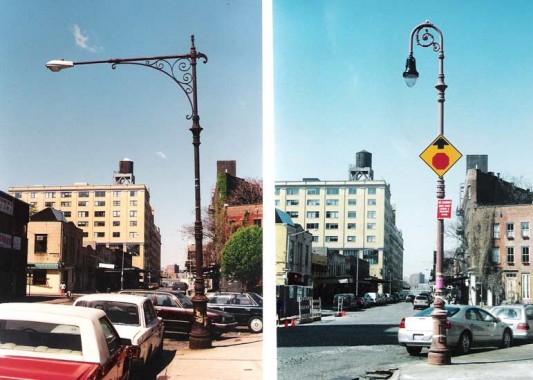 By 1997 our Type 24M Corv was still there, but listing considerably now (toward the camera here, so it isn’t immediately obvious). By the early 2000s, The Meatpacking Distict was MePa and the Department of Transportation had installed something appropriately faux, a new bishop crook post that is nearly a total replica of the old crooks. Thing is, the DOT has faux “Corvs” in its inventory, as a walk up Columbus Avenue or Malcolm X Blvd. will show.

Little West 12th Street was always my father’s favorite name for a street in Manhattan.