Dahill Road runs in four separate sections in the heart of Brooklyn, in Kensington, Borough Park, Parkville and Mapleton, and serves as the dividing line between two separate street grid systems as well as being McDonald Avenue’s running buddy, accepting some of its traffic and lessening the load on the el-shrouded McDonald. If you look at a map of the area you will notice the streets changing orientation, from the NE-SW of the Borough Park-Bay Ridge-Bensonhurst-Park Slope, where the streets carry unadorned numbers for avenues and streets, to the more or less east-west-north-south orientation of mid-Brooklyn, where streets are prefixed East and West and the avenues carry letter names.

Prior to the 1920s, Dahill Road was called West Street (probably because it formed part of the western end of the town of Flatbush).

Histories of Brooklyn are silent on how Dahill Road acquired its name. “Dahill” is an Irish name (rhyming with the similar Cahill) and derives from the Gaelic O Dathaill; the family originated in County Roscommon. Some Dahills arrived in New York in 1866, but again, the Brooklyn street did not get its name until the 1920s.

I recently explored the shortest section of Dahill Road in Parkville…after getting off the F train at Avenue I, I thought I spied someone I knew at a fruit stand on McDonald Avenue… 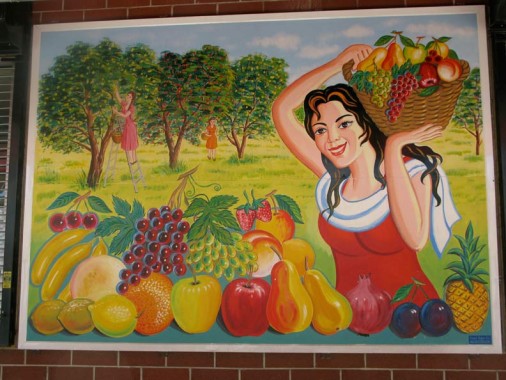 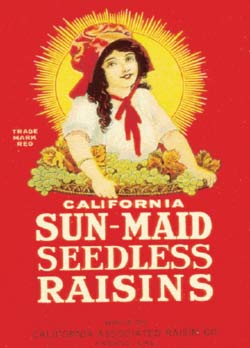 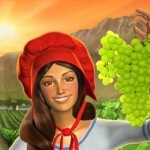 Nah…it couldn’t be her…or could it? 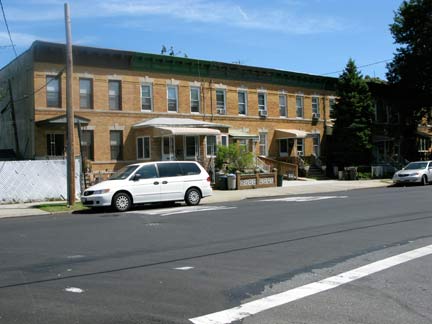 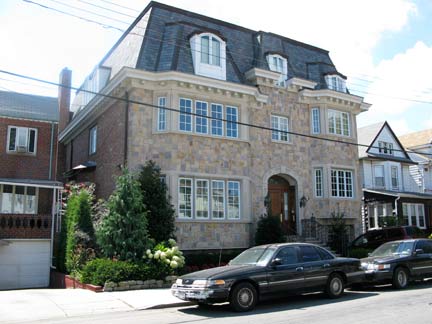 Two separate theories of design for living…attached houses on the east side of Dahill Road south of Avenue J, and a mansarded McMansion, more architecturally ambitious than usual in the genre, on 52nd Street just west of Dahill. 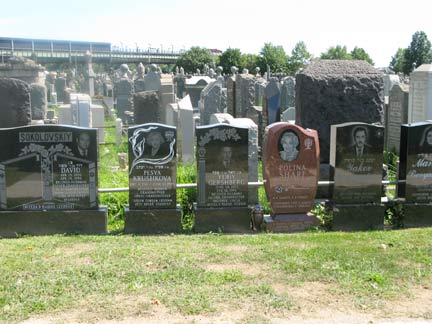 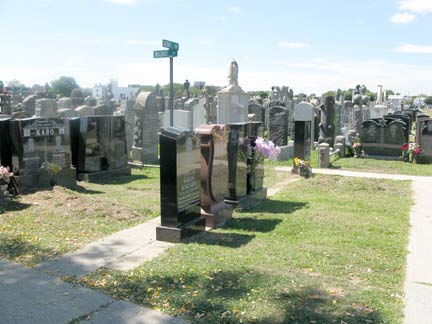 At 21st Avenue, Dahill Road is interrupted for Washington Cemetery, a 100-acre, amorphous expanse straddling the neighborhoods of Borough Park/Mapleton and Parkville and located roughly between 19th Avenue, Ocean Parkway, 54th Street, 57th Street and north of Avenues L and M. The cemetery first appears on maps of the town of Gravesend about 1850.

The cemetery is especially impressive from a passing train on the F line — it’s jam-packed, with gravesites just a couple of inches apart. Questions: why are Jewish cemeteries packed this way, and when did Washington Cemetery become a Jewish cemetery? With a name like “Washington” it wasn’t always thus, or was it? 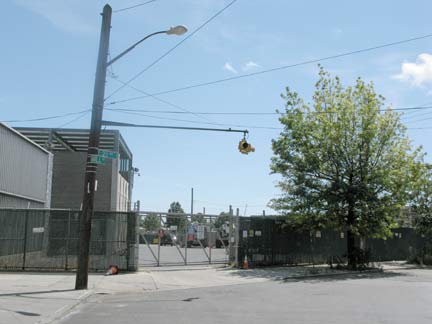 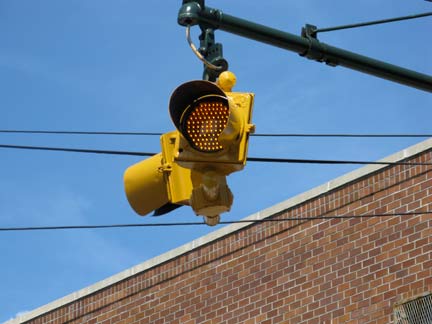 For as long as I remember — back to the Super 70s — the bend in the road that marks the change from 21st Avenue to Dahill Road has been guarded by a single, amber-blinking Cyclops stoplight. 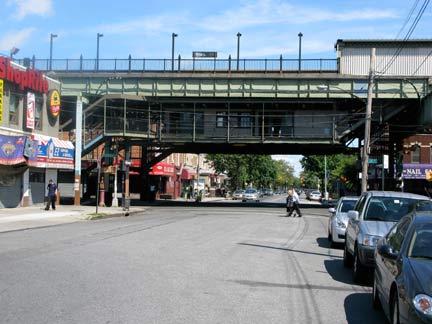 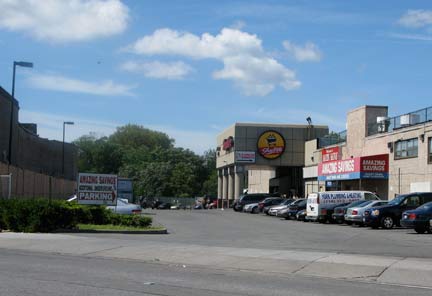 The BMT Culver Line (known these days as the F train) and the shopping center parking lot on Avenue I between Dahill Road have something in common. But what can that be?

Both mark the long-ago days of at-grade (surface) railroading in Kings County. As this picture on rapidtransit.net shows, this was the former site of the Parkville station on the Bay Ridge branch of the Long Island Rail Road, and the LIRR and the Culver intersected at this point. When the LIRR was placed in a cut (that still exists today) a ramp was built that connected the LIRR to the Culver, but when the Culver was finally elevated between 1917 and 1920, the connection was severed. Its right-of-way still exists in the parking lot. 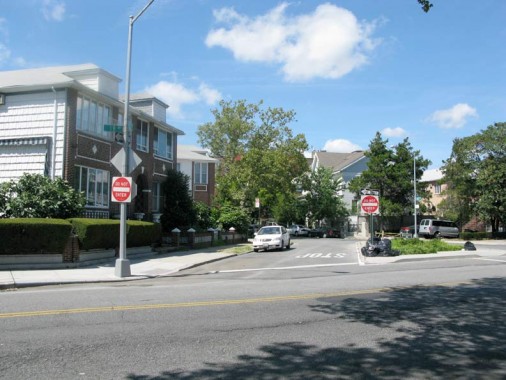 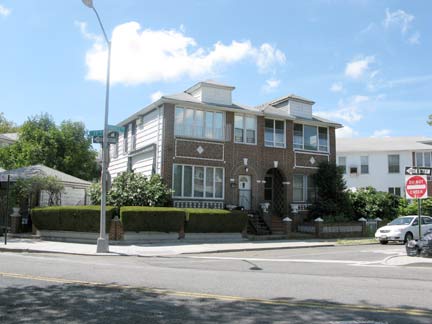 Get Shorty. This incredibly short section of Dahill Road runs for just a few feet, connecting 19th Avenue and 47th Street immediately before 19th changes its name to Parkville Avenue.

Amazingly the short stretch has not one but two separate addresses on it.

Excited to note your memory. If you attended P.S.177 in the 50s, did they still have the playground on the roof?
Do you remember the beautiful marble stairwell to Ms. Harrington’s office? The candy store across the street?
McDonald Avenue? I attended from 1942(?) – 1948(?). Then P.S. 226 for 7th and 8th grades.

OMG, I remember the playground on the roof of P.S. 177, and absolutely have remembered my whole life the beautiful marble staircase up to Ms. Harrington’s office. And Stoloff’s on Dahill Rd. If you get this, please write to me at RCraig11@aol.com. We must have been classmates. Rochelle

As you suggest, Washington cemetery wasn’t originally a Jewish burial ground. It was opened in 1835 by James Arlington Bennett and only became a Jewish cemetery a little later, when Jewish fraternal organizations and landsmanshaft-societies began buying plots there, around 1857. But that was exactly when the Eastern European Jewish community in New York began taking shape. (The first “Russian” Jewish synagogue in NYC, in fact in the United States, was Beth Hamedrash Hagodol, opened on the lower East side in 1852.

The reason it’s so packed is not so much because it’s Jewish, as because it’s very old and not very big, and the Jewish community in New York is big (and used to be a lot bigger). So, with Jewish people just dying to get in there for over 150 years, it’s gotten pretty crowded.

I grew up on to the east of Dahill/Macdonald, in “Midwood”, whereas my parents both came from the other side, i.e. Borough Park. Since my grandfather still lived there up to around 1960, Dahill Road is engraved in my memory as the dividing line and transition zone between those two very different but related neighborhoods.

I remember as a child in the 1960’s walking along Bay Parkway from 59th Street until I reached Dahill Road in Mapleton,Brooklyn. I passed the old and creepy Washing Jewish cemetery. It had toppled tombstones and vandalized mausoleums inside. I would go visit my uncle Steve and aunt Laura Seaburt and my cousins Nancy,Patty Freddie. My aunt was Italian-American and her husband was German-American.They lived in a row of attached red brick houses, not far from the corner. Sadly,both are long dead now and I have lost complete contact with all three cousins for many years now.Those are good old childhood memories for me from so many years ago !

I know the block of houses that you’re referring to, and I had a friend by the name of Schenk who lived in one of them in the 60’s. I think you actually walked down 21st Ave to get to Dahill Rd., not Bay Parkway. Do you remember a broken down FDNY ladder truck parked in the corner lot at Dahill and 53rd St in the mid-60’s?

Washington Cemetery was featured in the movie House On Carroll Street. Kelly McGillis follows a spy, getting off at the Bay Parkway IND station, and down into the cemetery, where he’s collecting names to use on fake passports.

From my bedroom window, on the top floor of the house, I could see what seemed like the “Crossroads of the World”–a concrete triangle between Dahill and the intersection of 17th and 42nd–and, beyond it, the expanse of 17th, all the way out to the Verrazzano Narrows and its eponymous bridge. Sometimes it seemed as if the whole world was unfolding before me.

It’s one of the best memories of my childhood.

I grew up on dahill road in the 90s ,wow such good childhood memories ,the triangle still there ,although not the view to the verrazano ,

This is terrific! My mother was born in 1913. Her father (my grandfather) owned 529 Dahill Rd., and this is where she grew up. According to a real estate site, that house was built in 1925. But the Census has my family living there in 1920. Hmmm. Also, it shows them in that house when Dahill Rd. was West St. (I am grateful for your mention of that in your history section.) My great-grandparents are buried in Washington Cemetery. I am going through old family photos, and it’s amazing that the house looks the same today as it did back in the old days. In those photos, I am trying to identify the surroundings and the vantage point. Now I have more work to do regarding the house and the neighborhood — a great pleasure.

The nicest section of Dahill rd will always be from
Kings Highway to Ave M .
And just for the record the windiest corner of all Brooklyn is Ave P and Dahill rd .

Back in 1964 my family moved into 1652 Dahill Road. I attended David A Boody J.H.S. Lived there about two years before moving to Jersey.It was an interesting time of my life especially since we had just come from Arizona. Culture shock!

Does anyone know which Brooklyn neighborhood the corner of Ave O and Dahill Rd is in? (Not quite Bensonhurst? Not quite Flatbush?)