One of the most enjoyable things I do with Forgotten New York is finding unheralded and unknown infrastructure. A light post representative of a long-lost genre … a building with a hidden history … or one of New York’s over 700 bridges that goes, in effect, from nowhere to nowhere.

I first “discovered” the 21st Street Bridge (so I have christened it) in March 1998 — I had ridden one of the last runs of LIRR passenger service on the Montauk Branch that stopped at the Richmond Hill, Glendale, Fresh Pond, Haberman, Penny Bridge and LIC stations and de-trained at LIC. I was supposed to report to work but decided to take the long way back to Woodside to get the train to Port Washington…. 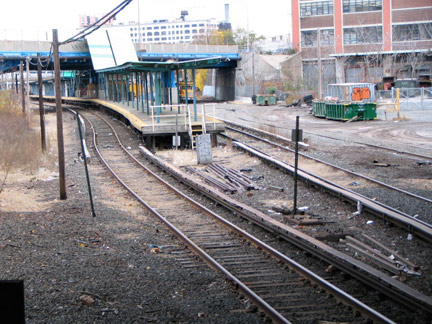 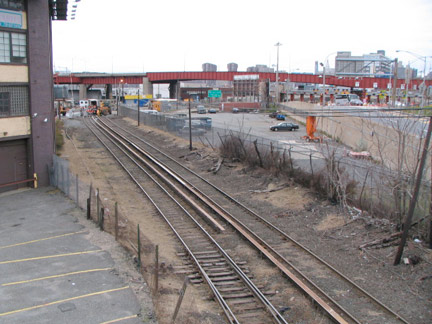 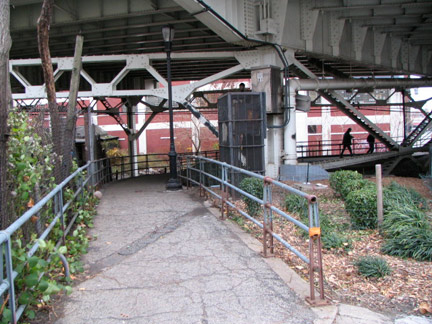 …I noticed that 21st Street, a.k.a. Van Alst Avenue, a major northeast to southwest route from Astoria south to Long Island City, ends rather abruptly at 50th Avenue and the Queens Midtown Expressway, where there is an entrance to the Queens Midtown Tunnel. Here, a pair of tracks lead from the Long Island city yards to the main branch of the LIRR coming in from Penn Station in the Sunnyside Yards…and a narrow pedestrian path has been built spanning them.

In the photos above we see the Hunters Point Avenue station, which is built along the tracks; it operates only weekdays, during the morning and evening rush, serving workers in the LIC area, as well as those who prefer the #7 train connection here to the one at Woodside. On the bottom is the pedestrian walk leading to the bridge. 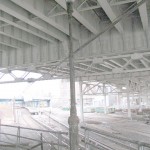 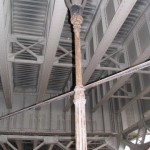 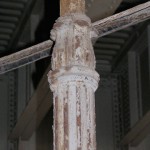 When I first came by here in 1998 this pathway was illuminated by a single rusting lamppost…this one, which is still there and still rusting. It’s one of the very few Type E posts left in the city; a series of sidewalk, side street and park posts are designated by letter in the Welsbach street lighting catalogue, from A thru H (B, for example, is the standard-issue park post). D, for its part, has no samples left, and there are just a few E’s around town, and this is one. It’s comparable in size with the A post, but it can be recognized by its fluting halfway up the shaft, an ornamental divider (photo right) and smooth metal to the top of the shaft. The city has placed two new retro Type A’s along the path to keep it company.

Forgive the bad Photoshopping...this was a cloudy day in November, the sun was low and light almost nonexistent, so I just diddled with the levels control so the photos would show up. 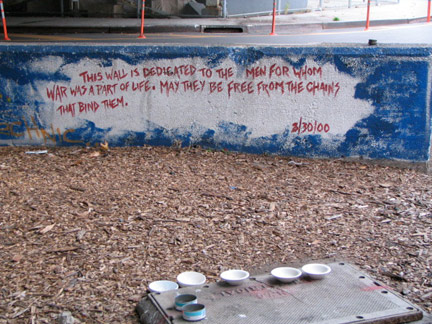 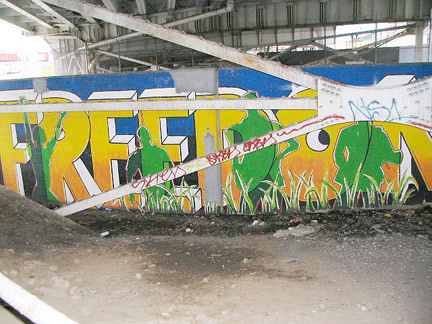 A pair of murals on the bridge entrance. Oddly, from the looks of things, they were done before 9/11/01. 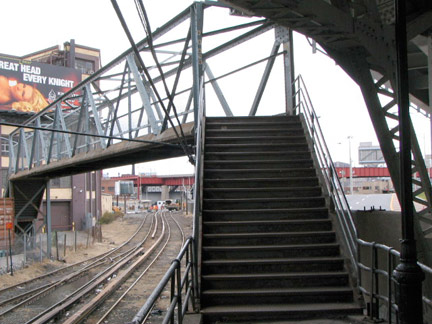 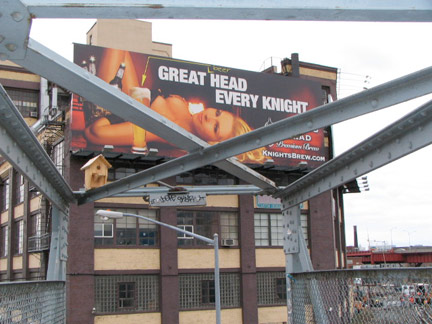 American Apparel and Abercombie & Fitch pioneered nudie or almost nudie ads, but this Knights Head ad takes the prize, so far. On the site, it’s advertised as “Vince Vaugh’s” [sic] beer of choice.” 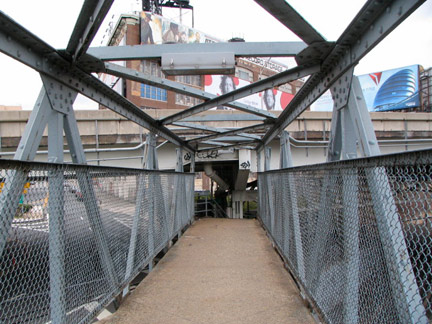 And then, there you are...it’s one of those little truss bridges the LIRR uses to get pedestrians across the tracks. I have liked this corner of LIC since I first saw it. It’s unvarnishedly industrial, with train tracks, lofts, rushing traffic on the overpass (safely away from me; the side streets are quiet) and best of all, virtually unchanged from decades ago, except in one regard: the pedestrian bridge to Greenpoint, connecting Vernon Boulevard and Manhattan Avenue, has been gone since the 1950s. So we have this one, connecting this sliver of 21st Street from its busier other side. 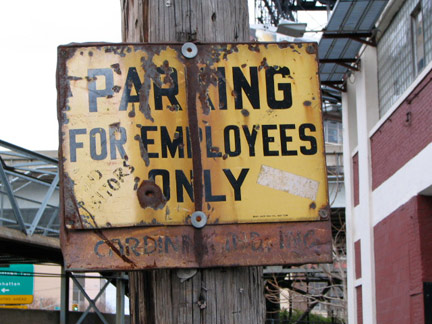 And we have these no-nonsense enamel signs from the early to mid 20th Century. There’s virtually no curved lines in the lettering. Someone has markered in the heavy-metal ümlaüt.

Thanks for the excellent posts and website. Fyi, I think the now-gone LIRR stop was “Hagerman” not “Haberman”. IIRC, it was the name of a steel mill at that stop.