If you’ve never been to the Broadway-Flushing section of Queens, it’s worth a visit — it’s home to some of Queens’ finest architecture, having been part of the Rickert-Finley real estate development around the turn of the 20th Century. Large plots, wide lawns, and beautiful, eclectic buildings. I’ll have a proper Foergottenpage on it soon enough and may even do a tour there. I’ve been familiar with the neighborhood since 1993 when I moved to the area from Bay Ridge to be closer to a job. Broadway, which runs from Northern Boulevard / Crocheron Avenue north to 29th Avenue between 158th Street and Utopia Parkway, is named for a former name of Northern Boulevard (the local LIRR station never dropped the name).

Though Broadway-Flushing was designated a Historic District by the United States Department of the Interior and was listed on the National Register of Historic Places on May 12, 2006, the Landmarks Preservation Commission has decided against making the neighborhood a historic district. Because of that, developers eyeing the area’s large plots are likely making plans to demolish many of the homes and fill the lawns with concrete. 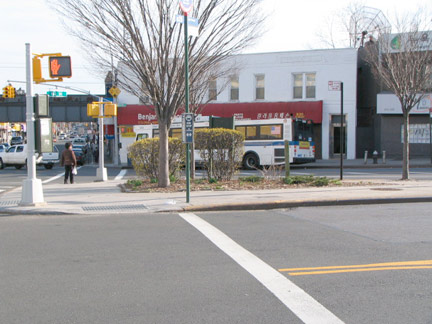 Today, though, my attention is restricted to a small triangle formed by Northern Boulevard, 162nd Street and Crocheron Avenue, for many years consisting of just concrete, but now gussied up with bushes and trees, and a sign reading “Studley Triangle.”

The triangle honors the formidably named upstate New Yorker Elmer Ebenezer Studley (1869-1942), a lieutenant in the Spanish-American War, attorney, and Congressman from 1933-1935. He was a Flushing resident in his later years and is buried in Flushing Cemetery. 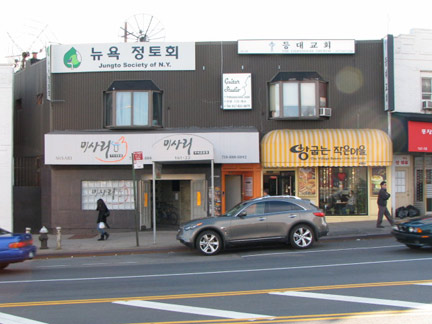 I have many memories of this particular corner, since I lived a couple of blocks away between 1993-2007. For example, on Northern Boulevard opposite Studley Triangle was one of Queens’ finest Irish establishments, the wood-paneled, fireplaced Bridie’s, filled with Killians, soda bread likely baked on premises, brogued bartenders and micro-minied waitresses who were likely fresh from Riverdance practice. The soda bread vanished long ago and a succession of owners have gradually erased the wood paneling. Many of Queens’ Irish moved back to the old sod in the 1990s and 2000s when her economy was booming. In the current collapse, will the thousands be sailing back? 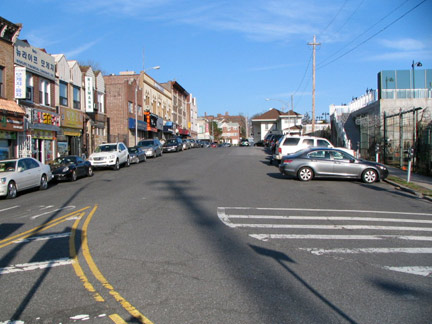 Depot Road seen from Northern Boulevard. And it was here that I purchased my vacuum cleaner bags.  The large building center left used to be a post office; it said so, until a short time ago when it was renovated. 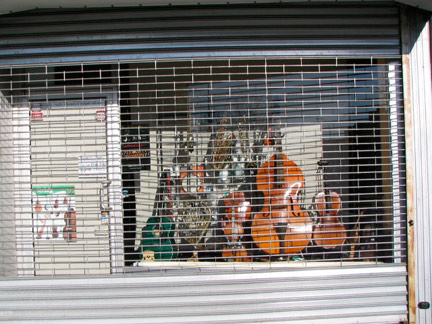 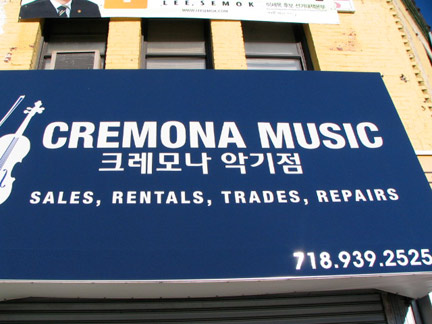 In Lovely Little Neck on Northern Boulevard there are not one but two places where prospective Keith Moons can buy and sell drums. At Studley Triangle, the clientele is somewhat more upmarket. Broadway-Flushing has cello players. 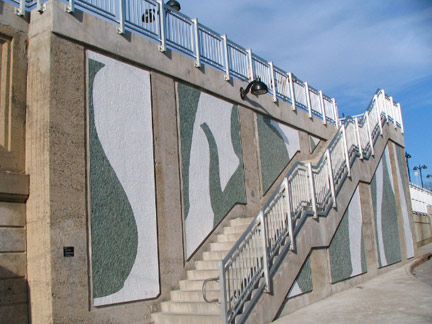 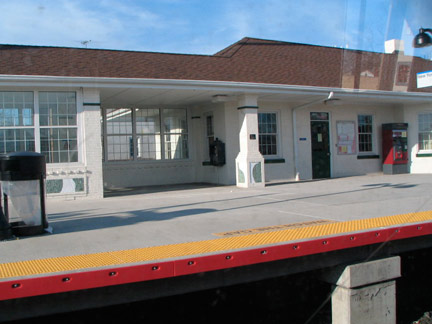 For many years the MTA basically let the LIRR Broadway station crumble and it was just about ready to collapse onto the tracks when, apparently, funds were found to fix up the station house and completely rebuild the platforms. Work commenced in 2006 and is still ongoing; it took 16 months to build the King of All Buildings, but this special project is taking a few years longer. I did quibble with the elimination of some of its original 1913 architectural elements, but I have to say that finally Broadway-Flushing has a LIRR station it can take pride in. 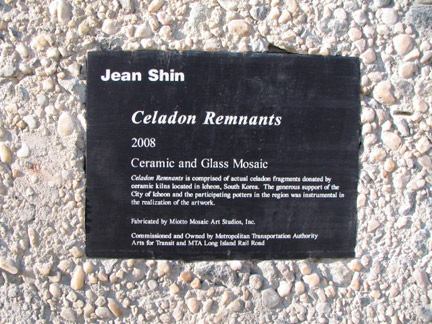 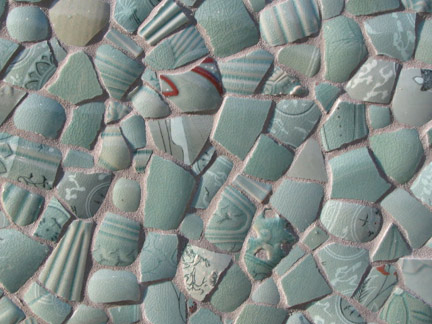 The MTA added a decorative artistic installation, something unthinkable when the station was in the depths of decrepitude in 2003-2004, Jean Shin‘s Celadon Remnants, “comprised of celadon fragments discarded by ceramic kilns” in South Korea. 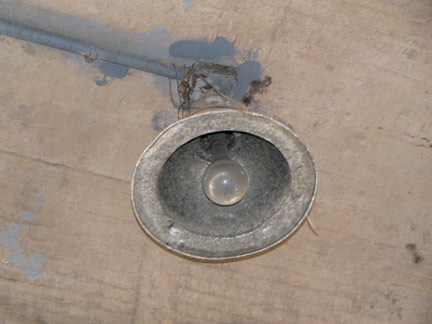 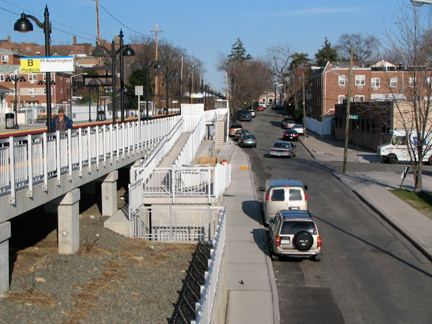 This page was a very pleasant surprise, as I hadn’t heard about the restoration of the old Broadway LIRR station. It is too bad that the original architecture couldn’t have been preserved, but I”m glad to see it looking so well!

As kids in the late 50’s, my friends & I would hang out on (and under) the station, watching the trains come & go, big excitement for kids in a simpler time. I left NY in 1977, & was appalled when I saw photos of what had happened to the station prior to the restoration.

Depot & Station Roads always seemed quieter than the rest of the neighborhood back then, somewhat of a time capsule full of remnants of Flushing’s early evolution from a largely rural area into a more urban one.
The Broadway LIRR station dominated the area; I’m glad to see one place in my old home town that hasn’t gone into decline, or changed so much that I can’t recognize it anymore in pictures.

I am a member of the Broadway-Flushing Homeowners Assn. A number of years ago, I produced a video presentation about the neighborhood and many of its landmarks and attractions. One was “Studley Square” which was identified as the smallest such square in the city. In my narration of the show I also pointed out that it was, in fact, NOT a square; it was a triangle.
The show received wide exposure and commendations from local legislators. A couple of years ago I was pleasantly surprised to see that the sign had been changed to “Studley Triangle”. I can’t help but suspect that my show had precipitated the correction.
Joe Brostek. 3/17/2013

A couple of months ago (3/17/13 – see above) I wrote that I was very pleased to see that the sign for “Studley Square”. had been corrected to reflect the fact that it is actually a triangle. (This was a good thing – in the interests of historic accuracy.)
While walking by today I was flabbergasted to see that the Parks Dept. has affixed a brand NEW sign saying: “Elmer H. Studley Square” to the BACK OF THE SIGN that say: “Studley Triangle”!
Can anyone explain this??
Joe Brostek 8/7/13

In my rear view mirror, I too see the Broadway LIRR Station as the centerpiece of Broadway-Flushing. I remember well going down there from 168th Street to wait for my father to get off the evening train from Penn. As a young boy I found the trains exciting–and loved the echo of the pedestrian tunnel. On occasion, there were Five Satins wanna-be’s vocalizing in there. I wonder how many people are aware of the hidden secret of the station: there was a large layout of HO scale trains in the former freight area run by the B-F Model Railroad Club, that was meant to be a recreation of the Port Wash line from Penn Station. Very impressive. I imagine that’s long gone . . . but I’m glad to see that the old depot has been reinvigorated. It was certainly much needed.

I am a very proud owner of a Tudor-style home in Broadway-Flushing! Thank you for including our beautiful and historic neighborhood on your website. I would certainly appreciate your adding the following comment about developers likely to demolish homes and fill the lawns with concrete:

Broadway-Flushing has been granted the strictest zoning ever allowed by the New York City Department of Planning, and a good number of the homes are also covered by deed restrictions that are enforceable in a court of law. In addition, the neighborhood enjoys the watchful eye of the Broadway-Flushing Homeowners’ Association that works with city agencies to enforce zoning and brings privately funded lawsuits against those attempting to violate the deed restrictions known as the Rickert Finlay Covenant. Over the years, the Covenant has been deemed enforceable by the state’s highest court, the latest rulings on June 7, 2013, and again by the New York Supreme Court-Queens County on July 17, 2013. In the most recent ruling, the Court also noted that the purpose of the Rickert-Finlay Covenant “remains as compelling today as the day it was created.”

If you want to live in a neighborhood with unique architecture, open green space, tree lined streets, wonderful public and private schools, diverse places of worship and easy access to points east and west, then I encourage you to visit our historic neighborhood. The gardens are especially beautiful in the spring!

Dear Maria Becce, Thank you for your lovely description of the Broadway-Flushing community. I have lived here for over 40 years. When friends have visited, many have commented on the beauty of the neighborhood. Walks to Bowne Park have
always been a treat. I would also like to give a big “Thank You” to the wonderful volunteers of the Broadway-Flushing Homeowners Association. A great group of caring neighbors!
Joe Brostek! 7/21/13

The Broadway-Flushing Homeowners Assn held a magnificent 50th Anniversary Celebration on October 23rd, 2014 at Church on the Hill in Flushing. Since 1964 there have been 28 uninterrupted presidential terms of service for the volunteer organization. Legislators were in attendance to present certificates of commendation to BFHA. A highlight of the evening was the cutting of a special anniversary cake by 9 presidents who were able to attend.

The organization has provided half a century of service to the community. Officers have included lawyers, accountants, teachers, judges, homemakers – all volunteers concerned about their neighborhood’s quality of life. Association meetings have included representatives from the police, fire, parks, city planning, and sanitation departments, the Botanical Gardens, Queens Quiet Skies, Community Board 7 and Borough Hall as well as members of the U.S. Congress, NY State Senate and Assembly and the NYC Council.

The primary mission of the BFHA is the preservation and protection of the community from illegal conversions and zoning violations. I am proud to be a BFHA member and grateful to have such talented volunteers looking out for my community.

At the General Membership Meeting of the Broadway-Flushing Homeowners’ Association on February 26, 2015, Borough President Melinda Katz honored the Association on its 50th Anniversary. Ms. Katz presented a Proclamation to President Bob Hanophy, Jr. Joining Ms. Katz in the presentation was City Councilman Paul Vallone. The issues of airplane noise and other issues affecting the community, including over-development and illegal apartments were addressed by Ms. Katz. The Borough President also commended the Association for getting Broadway-Flushing placed on the New York State and National Historic District Registers.

Thank you Borough President Katz for braving the frigid weather and taking the time to meet with members of the Association. The Proclamation will be proudly displayed at future meetings.

I had the pleasure of being at the Broadway-Flushing Homeowners Assn. General Membership meeting on Feb. 26 when Borough President Melinda Katz spoke and took questions.She certainly is an energetic speaker! It was reassuring to hear her spell out the issues that concern her: overdevelopment, illegal occupancy, airplane noise and pollution. These are serious issues impacting the community.
Joe Brostek March 11, 2015
PS – The Broadway-Flushing Homeowners meetings are very informative, no nonsense events. (The desserts are excellent too!)