Bronxdale was a small village located along Boston Post Road, surrounded by land owned by tobacco entrepreneurs the Lorillards (their snuff mill still stands alongside the Bronx River in the New York Botanical Gardens). When the Botanical Garden was developed the village disappeared, but today the name has been applied to a neighborhood roughly defined by Bronx Park, Pelham Parkway, Burke Avenue and the Dyre Avenue IRT line, formerly the NY, Westchester and Boston Railroad. I took a short walk along Allerton Avenue, the main east-west artery, and uncovered a bit of Forgottenisms there. GOOGLE MAP

ABOVE: woodcut sign, about the last sort of thing you’d expect to see on a store selling formalwear, Allerton and Wallace Avenues. 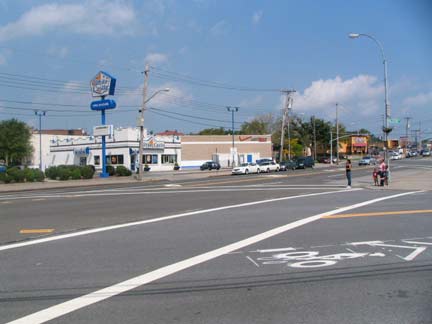 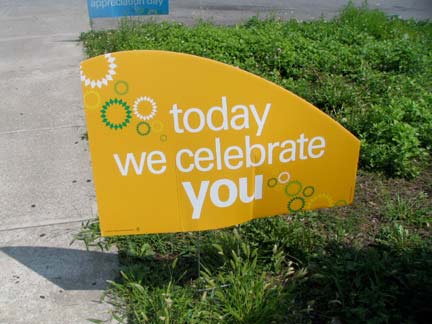 While the Bronx’ White Plains Road will not deliver you to White Plains, Eastchester Road doesn’t go to the village of Eastchester (not anymore, at least) and Westchester Avenue no longer goes to Westchester County, you can drive to Boston if you remain on Boston Road all the way to Massachusetts; as Route 1, you can even reach Maine using it. I’ve avoided it in the Bronx, though, since north of Bronx Park it’s a lengthy stretch of fast food joints, clunker dealers and gas stations. One of which, the BP (formerly British Petrol) at the SE corner of Allerton, apparently knew August 22 is my birthday. 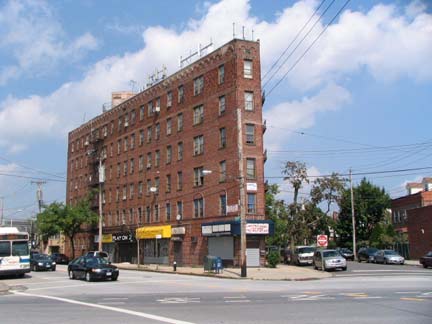 Triangle building, Williamsbridge Road and Allerton Avenue. Williamsbridge Road is one of The Bronx’ odder paths. If you look at a map (see Google link above) it sort of meanders around for a few blocks, as if unsure about where to go, and then gradually discovers a purpose, gains lanes and hurtles southeast to Westchester Square. It was named for a bridge in the colonial era spanning the Bronx River where Gun Hill Road spans it at present. I would love to live in one of these triangle buildings, especially in one of the rooms with the single window at the apex. 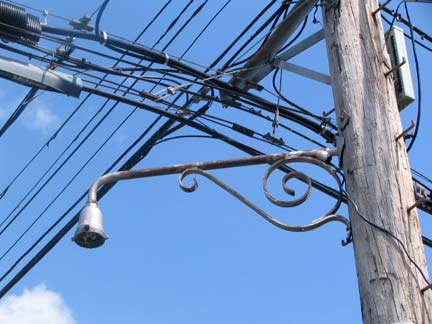 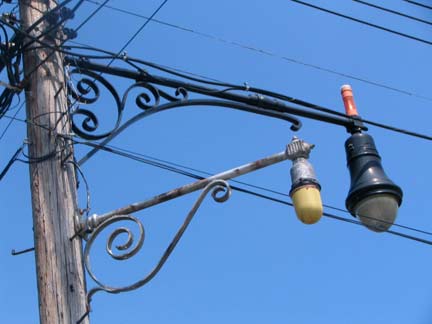 Decommissioned fire alarm stanchion at Allerton and Paulding Avenues and below, a 1910-era fire alarm stanchion at Allerton and Eastchester Road accompanied by a brand new telephone pole mast that was designed to look old-fashioned. In effect, the real McCoy and a blatant imitation. In about 50 years or so, no one will realize that one is about 90 years older than the other. 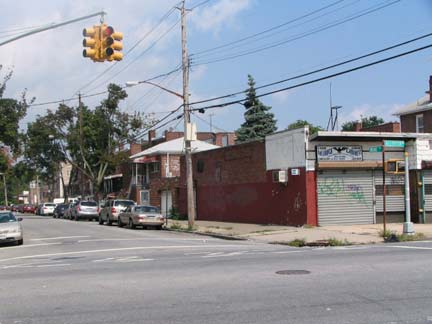 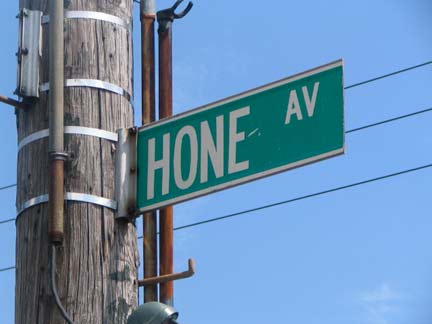 In eastern Bronxdale the north-south thoroughfares are named for 19th Century mayors of New York City and New York State governors. One of the more notable ones was Philip Hone (1780-1851) who served at City Hall from 1826-1827. After leaving office he kept one of the most detailed journals in literary history from 1828 until his death.

Hone’s diary records not only his society engagements and the major events and spectacles in the city in the first half of the century, but also his view of a changing city: his disapproval of Jacksonian Democracy; the disconcerting effects of the city’s constant construction; and his utter disgust with most Irish immigrants. wikipedia 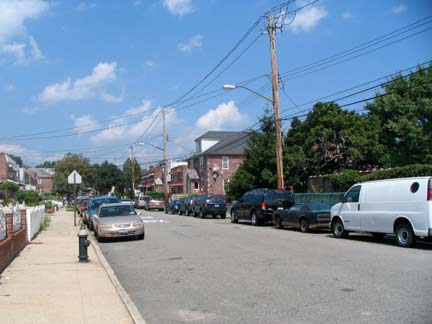 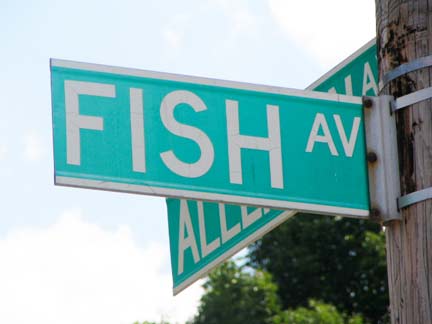 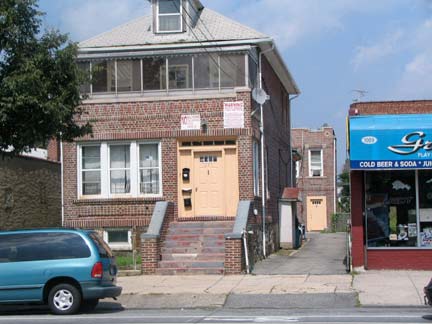 Note the back house behind the one facing the street. I have some research ongoing about these mysterious homes that will hopefully bear fruit in an upcoming FNY page. 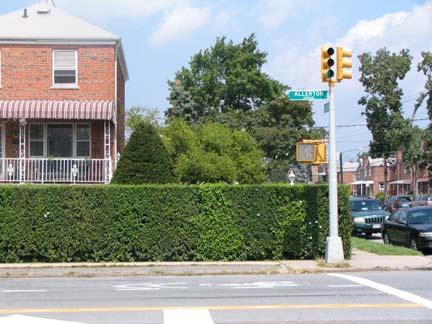 The rarest of NYC stoplight genera, this light is mounted on a pole approximately 10 feet tall — it’s a size in between the smallest 7-foot tall poles, while smaller than the big guy-wired specimens at the busiest corners. The street signs mounted on it is an unusual occurrence, too. Corner of Laconia Avenue. 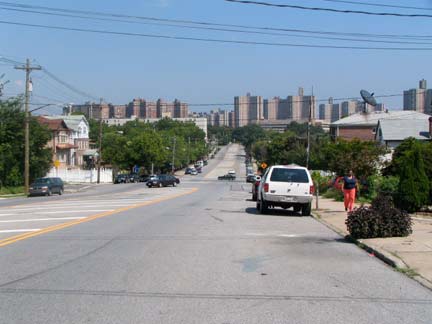 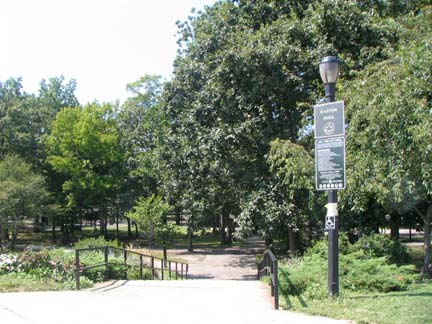 As we ease into the Baychester area, there are two notable parks: Seton Falls Park conatining Rattlesnake Brook, and Haffen Park on Hammersley between Guthter and Ely. Haffen Park was developed in 1959 and named for the first Bronx Borough President. As a civil engineer, Haffen was partly responsible for the planning and layout of the Grand Concourse. 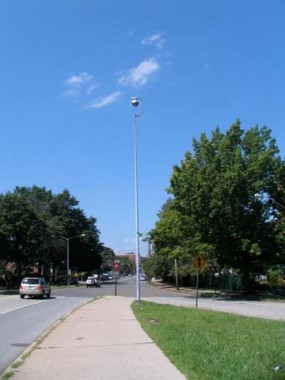 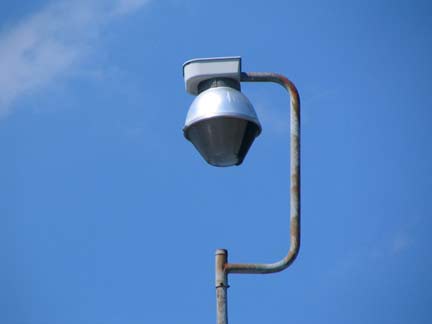 In the Bronx, the New England Thruway hung onto its collection of Westinghouse AK-10 “Cuplights” long after other NYC expressways had updated their lighting, but when the Thruway finally succumbed, it installed a weird set of super-tall, high intensity lights. This one is mounted on Baychester Avenue and East 222nd Street. In typical Bronx fashion, the New England Thruway does not extend into Connecticut and so does not enter New England.

Quite interesting, I learned about the snuff mill and family on a tour of the Pell Bartow mansion.

Thanks again and happy new year!

Can’t say i consider all the area discussed as Bronxdale. But its more because I lived a few blocks from Bronxdale Ave for most of my life.
And Bronxdale Ave goes from Tremont Ave (right near Castle Hill Ave.) to Bronx Park East.
Is all that your showing here still considered Bronxdale or Bronxdale Village?

I loved this retrospective, but I was wondering why there was no mention of Arnow Avenue, I had lived there for a good 10 years or so back in the 80’s!

It changes names, though, upon entering CT.