If you ride the Long Island Rail Road Port Washington line as I have every day for the past 17 years, no doubt you have noticed the four-story brick factory on the south side of the tracks the train roars past on 94th Street, about midway between the Woodside and Shea Stadium (now Mets Willets Point) stations. Well, I did, anyway, because I had noted the long-unused train siding, one of the last remaining vestiges of a time when the LIRR was used to move freight. I’m happy to report that the old factory has, instead of being razed for more Fedders specials, has been reinvented for the 21st Century as a building housing three high schools. 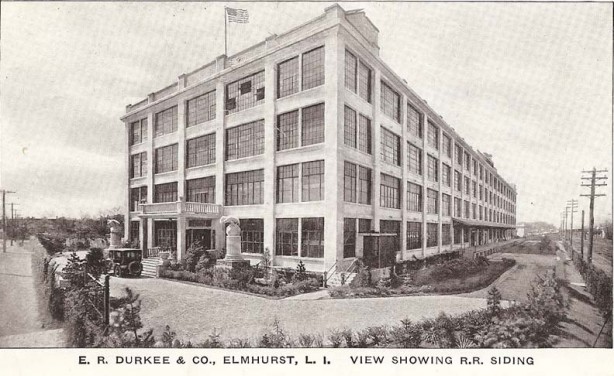 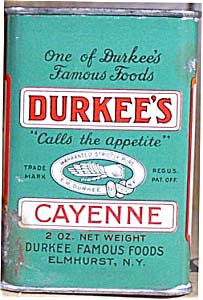 From Peter R. Simmons, Gotham Comes of Age: New York Through the Lens of the Byron Company, 1892-1942: Eugene R. Durkee founded a [salad dressing, spice and condiment manufacturing] company in 1851, and by 1857 his original “secret recipe” dressing for salads and meats had won numerous awards for excellence. The company went on to create sauces and gravy mixes, to import olives, and to package and sell shredded coconut. In 1906 the government turned to E. W. Durkee (Eugene’s son) to write federal standards for spices and extracts. This factory at Elmhurst, Long Island (Queens) joined the existing Brooklyn plant in 1917… Durkee Famous Foods was absorbed by the Glidden Company in 1980 and then transferred to the Consumer Products Division of the SCM Corporation.

Above we see the Durkee factory soon after its completion form the 94th Street side, which was its main entrance (I wonder whatever happened to those massive stone panthers(?) on either side of the door!) On the right side is the LIRR and the siding. 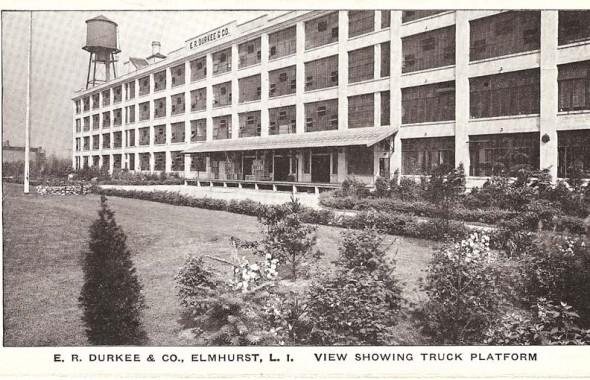 This front lawn once faced Corona Avenue. The lawn was triabgular in shape, since Corona Avenue approaches it at an angle. 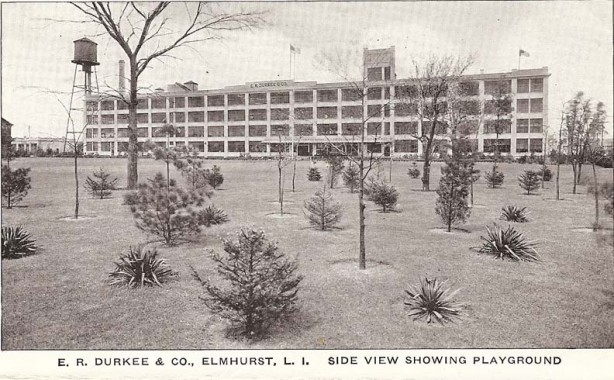 Hmmm…”playground” meant something different in 1917, I suppose. From the Durkee manual, with its gorgeous typography:

The building is 400 feet long and 100 feet wide, 85% of the outside of the building is glass (there is not a dark corner in the building). It is placed in a plot of nearly ten acres in the residential part of the town of Elmhurst, Long Island. The ventilation is perfect. It is fireproof, dust proof and vermin proof. There is no possibility of outside contamination. We own and opccupy exclusively the entire building. The ground surrounding it is a park with flowers and shrubbery, and on one side a playground for employees. The railroad siding alongside of our building — capacity eight cars — permits us to receive or to ship to any part of the United States from our own doors. 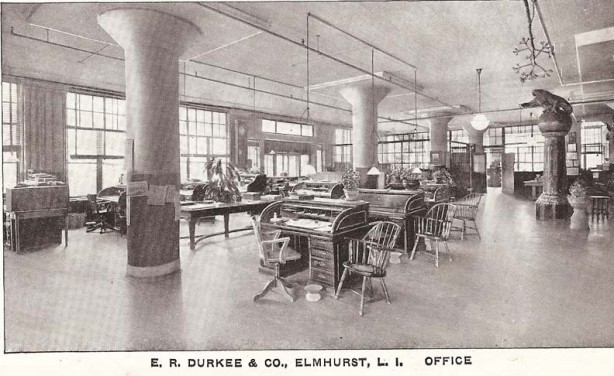 Here’s a photo of the office area, complete with rolltop desks. Note the panther on the right side — two of them flanked the front entrance. As the manual said, the room looks flooded with light. The manual said of the dining room:

The large dining room has window boxes of growing, flowering plants, a piano, a wireless set — and in bad weather the girls dance and sing. In good weather they use the park as a playground or lounge. We have two teams of baseball for girls, and two teams for men — croquet, etc. 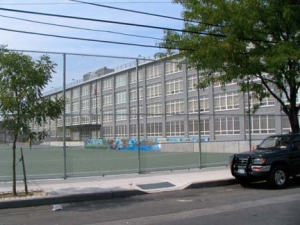 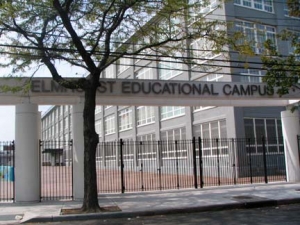 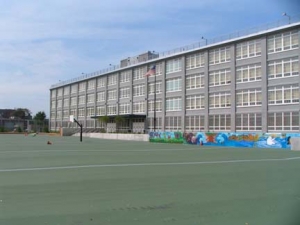 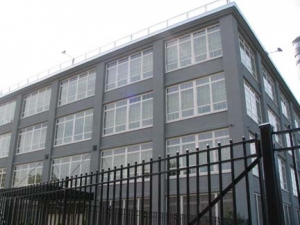 I’m not sure when Durkee moved out of the building. I heard that it served as a leather ‘factory’ for awhile. In 2007, renovation work began and the work was completed the next year, when it became the Elmhurst Educational Campus, consisting of three separate high schools — I have seen that number as four elsewhere. Online information about the campus I have found to be sketchy. SBLM Architects, which oversaw the redo, has an item on its website that says:

The project required a complete interior gut-renovation with selected demolition while the exterior was preserved due to its historical significance… The project involved coordination with SHPO (State Historic Preservation Office) and LIRR (Long Island Rail Road).

As you can see, the front of the factory facing Corona Avenue has been again given over to use as a ‘playground,’ this time a real one with a track, field and basketball court. 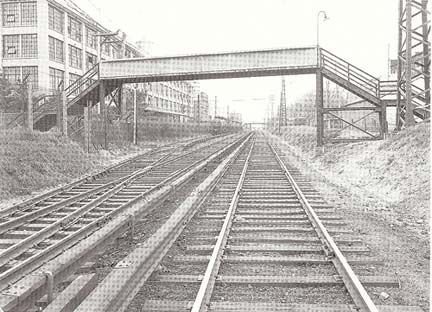 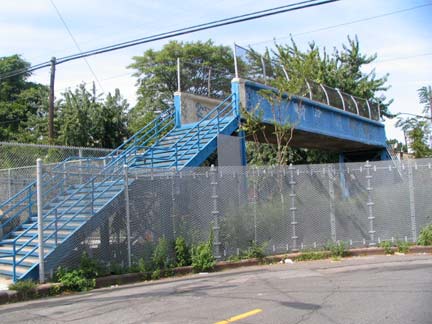 According to Queens historian Vincent Seyfried, the pedestrian footbridge at 94th Street has been there since 1920. It’s still there, with a fence to make it tougher for Elmhursters to throw garbage on the tracks.

COME ON IN More subway oddities

I now know the answer to a question I have had for some time – the highest el station in the system. I thought it was Broadway Junction rather than smith 9th st., but had smith 9th as the second pick

I remember my dad would take me with him on long walks after dinner in the summertime. My mom would stay home and take care of my baby sister. Being only three or four at the time, I usually had to be carried most of the way. We’d start out near 54th Ave and Junction Blvd. (where our small, second floor apartment was) and sometimes walk all the way to the big Gas Tanks on 57th Ave near the expressway. Other times, we’d walk over to see Kolsman, the big avionics factory where my dad worked. And, sometimes we’d take a shorter walk down 94 Street, across Corona Ave and over the footbridge behind the Durkee factory. We’d stand on the footbridge, wait for a train, and then my dad would hold me up in the air and tell me to wave to the train — the train operator always blew the whistle for me when we did that! I also remember that there were lots of small wild roses growing along the railroad fence back there – I would pick a bunch of them, stuff them in my pockets, and bring them back home for my mom.
Almost 60 years later I still have these nice memories. Thanks for posting that photo of the Durkee Bridge!!

According to articles available on the website of the Allentown, PA Morning Call newspaper, Durkee moved from Elmhurst to Bethlehem, PA in 1957. Somewhere around 1995, operations moved to the existing Tone’s spice plant in Arkeny, Iowa. ACH Food Companies, Inc. now makes Durkee, Tone’s, Spice Islands, French’s, and Weber Seasonings (as well as supermarkets brands) products there.

I have one of the cans from Ginger which dates back into the 30’s. Can you tell me how much this can would be worth. It is in excellent shape and all the print is perfect?

During 1940’s my aunt /uncle lived at Claremont Terrace. We lived in Flushing. Took Corona Ave to get there and always wondered what this big white bldg with it’s water tower was. Now I know thanks to your Forgotten NY. Also after WW2 also along Corona Ave I think(vague recollection) there were many, many wounded veterans with arms, legs, head in white bandages, splints, etc. living in one story red wood painted bungalows , a lot. Presumed they were moved to Hospitals later. As seen I never forgot these sights. Never saw anything about this anywhere.

My Mother grew up in 94-14 Corona Ave – pretty close to the factory. The plant was elevated slightly above Corona Ave so you could see it from the street. I remember hearing that this was pretty rural in the 1930-50’s: my Grandfather would walk down the street (easterly) to a store that had live animals, pick his chicken, had it killed and feathers plucked to have fresh chicken for dinner. His store under the apartment above sold ice cream, candy and cigarettes – they made it thru the depression as the sugar and tobacco were rationed. My grandparents came from Turkey and had no training in English – they learned it by reading the newspapers and speaking to their customers in English – and became US Citizens.

All of a sudden Durkees came into my. I’m 80 and now living in Florida and was wondering what happen to the Durkee plant and found this site. I lived on 94st and 55Ave and went to a parochial school St. Bartholomew forget the Street it was located on but I walk to school every day and remembering walking over the bridge on my way. This has brought back some found memories. By the way I went kindergarten and 1st grade went to the public school right next door to my home P.S 13 and just found out that supreme cojrt justice Antonio Scalia went there at the same time altough was older and was in 3rd or 4 grade. I rememer my teacher name Mrs Wagner not sure but she seemed very old then could be wrong, that hsd to be around 1942 it was during WW 2. Went back to visit several years ago my house 94 16 55th Ave is gone and property is now part of P S 13 School yard, was hoping to see it as I was born in the house. Just reminiscing, thanks for post and information.

It was on Judge Street.

In 1961, myself and a few mates got caught throwing rocks at trains from the Durkee Bridge.

Cops took us back to school.

I got spoken to when I got home!

During WWII, thought a portion of Durkee’s plant was converted for construction of torpedoes for Navy. Can that be confirmed?

My mother worked in a coconut packing plant in Woodbridge in 1948-49. Anyone have any info about it?