Catalpa Avenue, a street running west-east in Ridgewood, slots between 68th Road and 69th Avenue between Seneca and Myrtle Avenues and 65th Place. Catalpas are large-leafed trees that generally grow to a height of 60 feet and can be found in North America, the Caribbean, and East Asia. The proper name is actually a Native American word, catawba, but a botanist’s transcription error originated the catalpa rendering. I’m not sure if there are any catalpas on Catalpa Avenue. 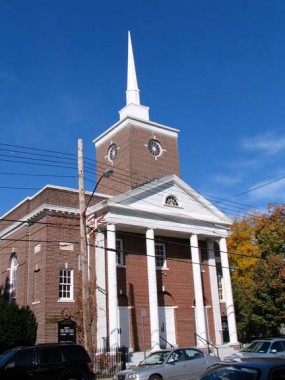 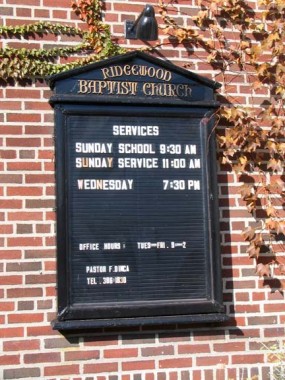 Ridgewood Baptist Church, 64-13 Catalpa, one of a number of picturesque churches found on the avenue 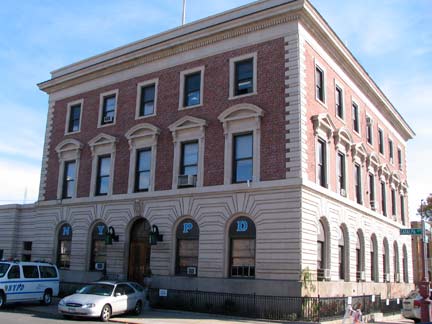 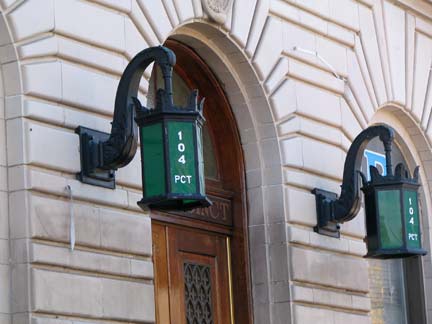 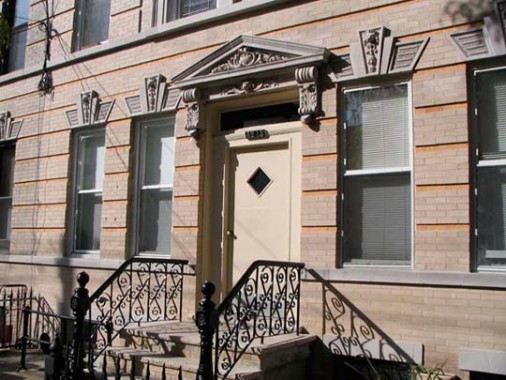 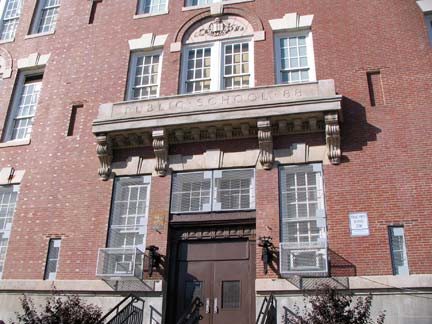 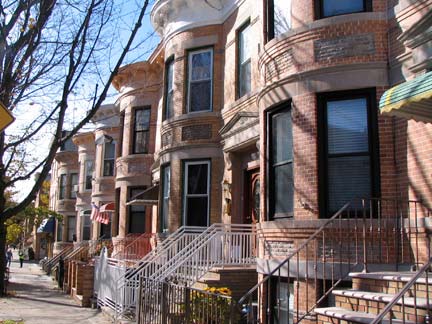 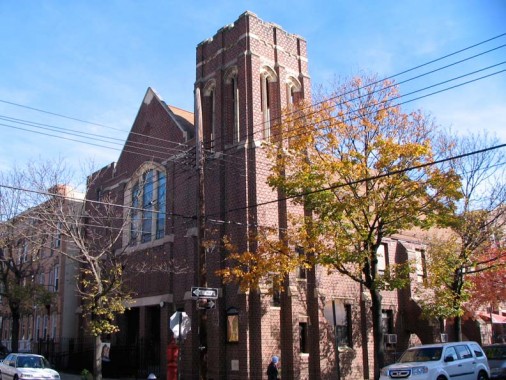 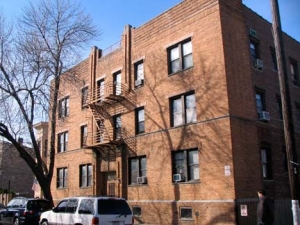 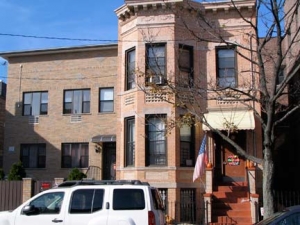 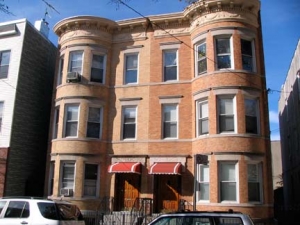 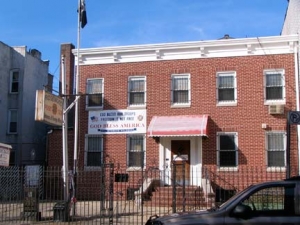 A Moderne building, some traditional brickfronts, and Veterans of Foreign Wars Post 123, near 60th Street 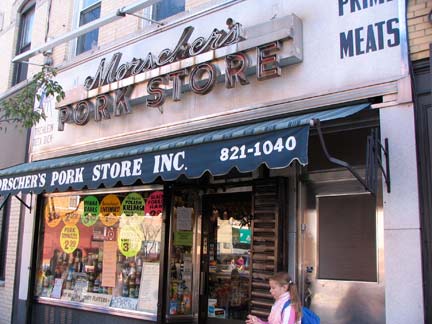 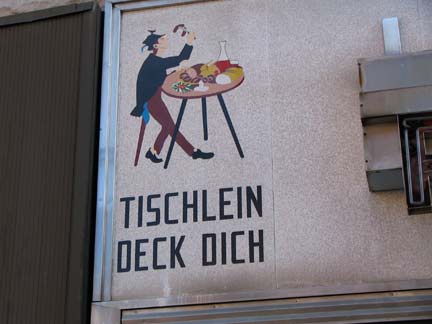 Morscher’s pork store, Catalpa and Woodward Avenues. The German inscription means roughly: ‘little table, set yourself’ and is taken from the Grimm brothers’ classic story “The Wishing Table, the Gold Ass, and the Cudgel in the Sack.” The context is a magic table that sets itself:

When the tailor was thus left quite alone in his house he fell into great grief, and would gladly have had his sons back again, but no one knew whither they were gone. The eldest had apprenticed himself to a joiner, and learnt industriously and indefatigably, and when the time came for him to go travelling, his master presented him with a little table which had no particular appearance, and was made of common wood, but it had one good property; if anyone set it out, and said, “Little table, spread thyself,” the good little table was at once covered with a clean little cloth, and a plate was there, and a knife and fork beside it, and dishes with boiled meats and roasted meats, as many as there was room for, and a great glass of red wine shone so that it made the heart glad.

The store replaced its old neon sign in 2010, but the “tischlein” art is still there. 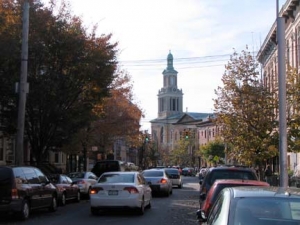 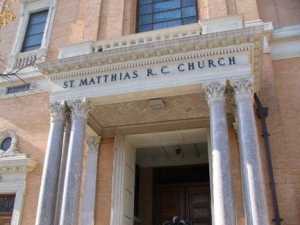 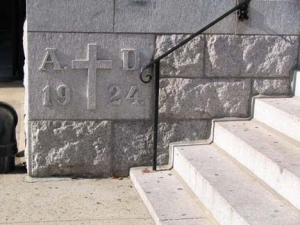 Other than St. Aloysius on Onderdonk Avenue and Stockholm Street, St. Matthias Church on Catalpa between Woodward and Onderdonk is the tallest building in Ridgewood.

St. Matthias Parish, named for the apostle that replaced Judas Iscariot, was established in 1908 and the church originally occupied the building now home to the parish school — much like my home parish, St. Anselm in Bay Ridge. When the church outgrew the building, the new church was built between 1924-1926.

Warren Post: Restoration of a 1910s-era Lamppost in Tribeca

The YMCA on Catalpa was once a courthouse. When was it in use? Why was it abandoned? Thanks.

I don’t know when that building ceased its role as a courthouse. But, having lived across the street from it during the 1950s I can tell you that it was a very active place. It provided many interesting days for us children as we watched the comings and goings. On hot summer days we frequently sat on the ledge (that surrounded the building about 5 feet above the sidewalk and under the windows on the 64th Street side). We could not understand what was going on inside the building but the voices themselves through the open windows were a source of amazement. In 1956 Alfred Hitchcock and a film crew showed up (with Henry Fonda and Vera Miles) to film segments of the film “The Wrong Man”. You can see the building in the trailer available on IMDB (website: http://www.imdb.com/title/tt0051207/?ref_=nv_sr_2). We had fun watching and talking to the people (Vera Miles was beautiful and actually talked to us; I was in heaven).

as a youngster my mom would take me to catalpa ave for the annual parade. I was so young that I don’t even know the occasion but do recall the excitement. maybe the tradition continues to this day… don’t know since I left over forty years ago. bye the way, don’t forget about the pizza prince on catalpa and fresh pond.

It was Flag Day!

I lived in the apartment house on the corner of Catalpa and 62nd St.The kids from the apartment building often played on and near the courthouse. One of the things we did that I remember vividly was taking a cardboard box from a refrigerator that someone had gotten and opening it up flat and taking it to the top of the courthouse steps, sitting on our “magic carpet” and flying down the steps. Mr. Stehle, I remember you. I think you went to PS 88 with my sister, Judy Denhoff. Great memories of being a kid in Ridgewood!

Why didn’t you start your walk down Catalpa Ave. at 65 Place. Start at the Farmers’ Oval Park/Conrail train track? I use to live at 64-45 Catalpa Ave.

Does anyone know of a tailor shop that was possible on Catapla Ave? Pfundsetein & Sons est 1896 and would have been there well into the 1920’s at least

If it was on the corner on 60th lane,across from the Lutheran Church, it was still there in 1951 when we moved out from across the street. The owner always drove Hudsons!

Our family lived at 6830 64th St prior to 1950, just down the street from the Ridgewood Courthouse. I distinctly remember paddy wagons drawn up for hearings, and seem to recall that the accused killer of the Lindbergh Baby was arraigned there in the late ’40s. In those days, we attended St Matthias Church School- quite a walk for 1st graders!

I lived at 61-11 Catalpa from 1948 – 1956. It was an apartment building back then…turned into a condo bldg. in the recent past. Hard to imagine a family of 6 living in a pretty small 3 bedroom apt.
My siblings and I all attended PS88 (it was smaller then). The principal (Mrs. Regan) was totally feared by every kid!! I was the youngest of 4; my siblings all attended Grover Cleveland HS. Our family were members of Covenant Lutheran Church.
Ridgewood was heavily German back then. Pretty common to see homeowners scrubbing their front steps on a Saturday morning.
Recall when Farmer’s Oval first opened in the very early 1950s. What a treat it was.
There was also a Memorial Day parade every year on Fresh Pond Road. We used to stand near the monument that was situated near the “Blue Terrace” building…later I think this became a Salvation Army facility.
Another memory: The chain-driven, solid tire coal trucks from the Dietz Coal Company that rumbled along Fresh Pond Road. The vibration could be felt in your feet!

There was a small kosher butcher near the southwest cor. of Catalpa and Seneca Aves. Abe Zipper would stand outside the doorway sometimes wearing an apron that came down to his shoes. Across Seneca from Zipper was a coffee, tea, and spice store that had filled burlap bags in the window. I can still remember the aroma of the spices and coffee until this day. Next door to this store was Reiger’s, a very small candy and newspaper store. It had an Elsie the Cow tin sign outside. You could get handpacked Borden’s ice cream there. I shutter when I remember when I stuck my hand in the cookie jar to help myself. 2 cents a sandwich coffee. The next block on Catalpa, between Onderdonk and Woodwood was my church and school, St. Matthias. My four brothers and myself all went there. Ridgewood has more of an intimate and small town feel to it. We lived in a Mathews flat. There are hundreds of them built between 1908 and 1914.

Anybody remember a bakery in the Ridgewood Area called
Reich’s ? If so do you remember the address?

I grew up on 64thStreet between Catalpa and 68th Ave. So one day my grandmother ( who’s house we lived in) sent me to the Deli across from the Courthouse.
I wasn’t always happy ‘shopping’ for grandma.. She wanted 4 slices of liverwurst, some pumpernickel bread and pickles. She would sometimes give me a nickel for a reward.
Anyway that day there was a Cadillac parked on the corner and lots more people around than usual. Inside the car a beautiful woman(Vera Miles) was getting make-up applied.
I didn’t know her or what was going on. Inside the deli I got my order in and waited at the register. Standing in the rear near the ice cream case was Alfred Hitchcock. I knew him
from his TV show. Then a tall man asked if he could get some smokes while I waited. He ordered a pack of Pall Malls. Henry Fonda smiled at me and nodded a thank you. They were
filming ‘The Wrong Man’. What was unusual was that there were no big crowds or any of that. They were shooting scenes outside and then inside the Courthouse. The other thing was
my father was a patrolman in the 110Pct. where this case began. The actual man was identified by clerks in a liquor store on my Dad’s beat- First time Hitchcock did a true story- and the first time
I saw movie stars up close. Then I just took grandma’s order to her, got my nickel and went to Farmer’s to play

Does anyone remember a H E Hurst, he was an undertaker on 78 Ctalpa Ave Ridgewood Queens, he ws the undertaker for my husbands uncle who died their in 1928 in October,any help would be greatly appreciated