When Christmas comes around, my thoughts sometimes wander toward Greenpoint. I have many memories from when I was in my twenties concerning the Garden Spot of the Universe. I once accepted the keys for but never lived in an apartment on Green Street that was outfitted with a single electrical outlet and a bath tub in the kitchen. I fled back to Bay Ridge, where I remained for the next 11 years. I had considered Greenpoint because several friends were there, including one who had the greatest apartment I have ever seen, before or since.

It was a rambling two bedroom in a two-family brick building on Oak Street next to a ‘home for the aged.’ The vast front room had 3 windows that looked out on Oak and Guernsey, which meet each other at sort of an odd angle, enough so that you could see all the way down Oak toward the water. The place had views of both the King of All Buildings and the World Trade Center from two different windows. I remember the Christmas parties there and the snow-swirled trips to liquor stores (in Greenpoint they are never far away). I remember a doozy of a head cold while we sat up till 5AM discussing theMichael Stewart graffiti case. Then the B61 ride to Atlantic Avenue where I got the B63 to Bay Ridge. Soon enough my friend gave up the apartment and that was the end of my personal involvement with The Point, except for the occasional Forgotten foray. To wit:

I was lurching up Leonard Street after a reconnaissance mission on Manhattan and Graham Avenues and, turning the corner from Driggs, this magnificent old pile met my eyes. I’ll show it here again without the type all over it: 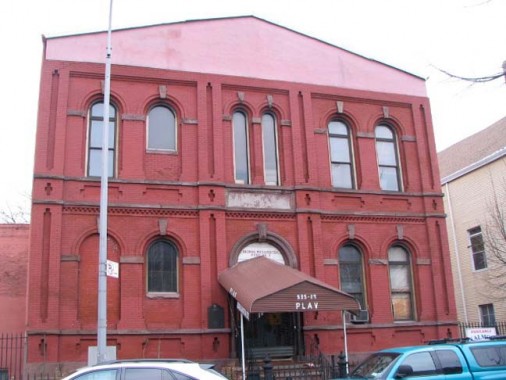 Magnificent as a pro-cathedral, with ecclesiastical-looking brick crosses and arched windows of three different sizes. Francis Morrone doesn’t mention it in his Architectural Guide to Brooklyn, and the AIA Guide to NYC overlooked it, too. Thus, I know next to nothing of the building’s history, though a past as a house of worship wouldn’t surprise me. The original metal fence is still intact. The only fly in this particular ointment is the metallic awning with the address and “PLAV” scrawled in white. 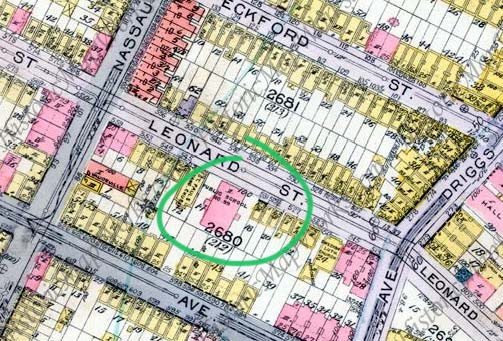 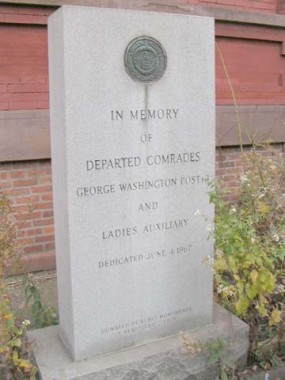 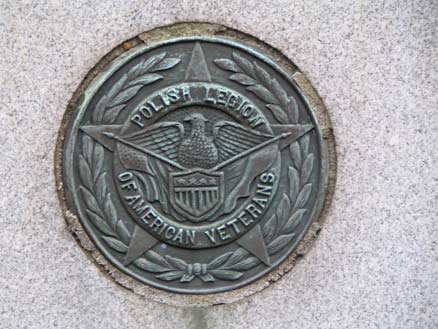 This was the former headquarters of the Polish Legion of American Veterans; I say “former” because there didn’t appear to be any recent activity on the premises at all, and a for sale sign was on one of the driveway fences. 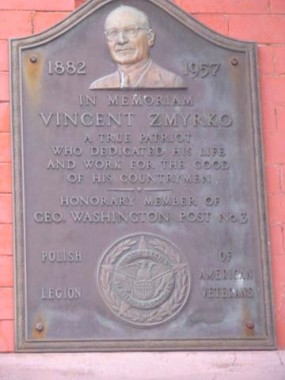 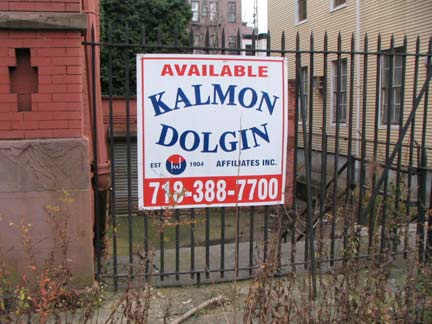 Though PLAV has appeared to have left the building (I can’t locate a web presence) ghosts, if there be such, abound here, with monuments, plaques, and the ultimate harbinger of death, the for sale sign. Our veterans’ cathedral will soon give way to… a Belvedere, perhaps. 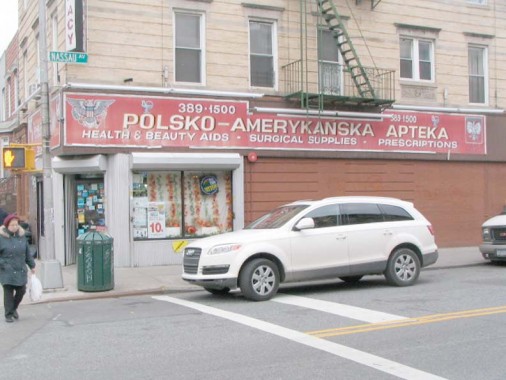 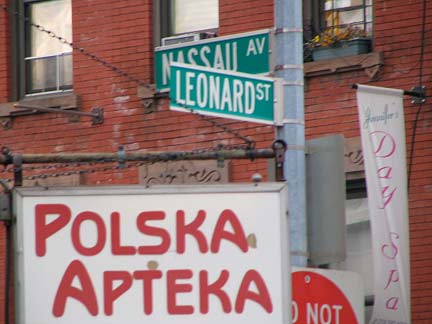 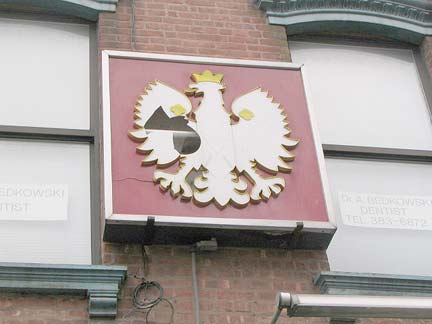 At Nassau and Leonard, dueling aptekas are catercorner. The one on the NE corner has an impressive hand-lettered sign, but the one on the SW corner comes back with a classy, if disfigured, Polish eagle.

I remember that building well during my time growing up in Greenpoint. Never knew what it housed- but then back in the seventies those buildings were pretty common- sadly most are gone.

My father lived at 42 leonard street for most of his childhood. I am looking for a picture of the old tenement house it would be somewhere around 1908-1922.

I’m a current member of the P.L.A.V. “Polish Legion Of American Veterans. It’s sad to see what must of been a great club, so badly neglected. As with many different groups or clubs, members get older. Then Neighborhoods change, people loss interest. We’re working hard at our club to keep that from happening here. And Nationally the P.L.A.V. has quit a few strong posts. Thank you for posting here.

Born at 92 Newell St. in 1923. Went to PS 110. Lived in Greenpoint until 1937 when we moved to Dumont NJ. New different way of life, but who could ever forget growing up in Greenpoint….Was 90 yesteerday, and memories of Winthrop Park and McCarren pool, tar beaches…..ever present in good memories.
Thanks for the viewing. Loved it.

I used to live in the Polish neighborhood in south Cleveland, Ohio. There were many wonderful old Polish community activities, including a PLAV where one of my brothers was in the junior Legion as a kid with a uniform and marching practice…the whole bit. I remember going to the Polish Women’s Hall and dancing to polkas as a teenager. Great fun!