It’s one of the longest-tenured abandoned buildings in a borough full of them — see parts of Seaview Hospital, the Staten Island Farm Colony, and the St. Augustine Retreat House (into which neither your webmaster or any of my scouts have ventured into yet, at least to obtain decent photos). The castellated, turreted S.R. Smith Infirmary, later the Staten Island Hospital, has sat empty here at Castleton and Cebra Avenues in New Brighton, Staten Island since 1979, making 2009 a full 30 years of catatonia. Will the patient ever rouse again, or is it forever sentenced to a nightmarish, weed-choked living death?

Look on his works, ye mighty 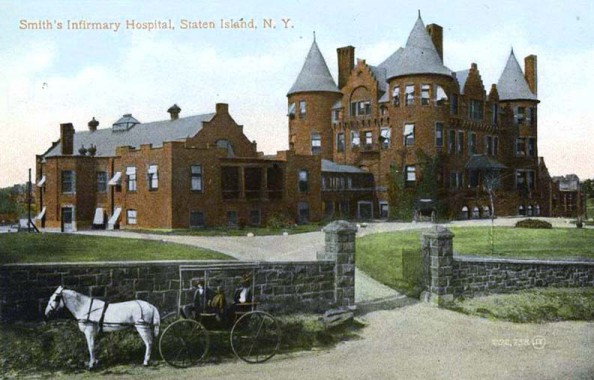 There was a time, though, when the Infirmary was the place to go in Staten Island if you weren’t well. I’ll synopsize Richard Nickel’s excellent history and pictorial at theKingston Lounge…

In 1861 an infirmary was named for a local physician, Samuel R. Smith, who had devoted himself to charity work for the poor. It occupied his former residence in 1870. Alfred E. Barlow was the architect behind this fantastical structure — of course you would build a castle on Castleton Avenue — and it was completed in 1890. It’s a rare example of Ruskinian Gothic in NYC — the Jefferson Market Library on 6th Avenue and West 10th Street may be another. 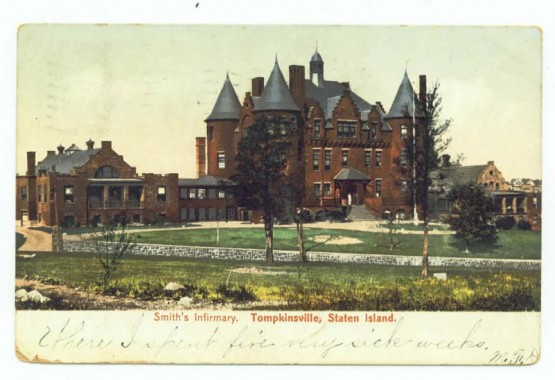 Over the decades the Infirmary added buildings on each flank, nurses’ quarters, ready rooms. These have not survived to the present. It was renamed Staten Island Hospital in 1917 and continued as one of SI’s premier facilities until 1979, when the hospital decamped to a more state of the art plant in Dongan Hills at Mason and Seaview Avenues. And so the long twilight began. The building was then up for landmark status by the LPC in 1983, but the LPC rarely tosses bones Staten Island’s way. A condo plan was floated (it was a scam), but work actually began on a 6-story structure built next door to the Infirmary (replacing the building at the left in the postcards). That building was in use by squatters as little as 5 years ago but it is in utter ruin now. Landmarks Preservation does not renew discussions on previously tabled items, so landmarking is now nearly impossible. The building has been open to the elements for 30 years. 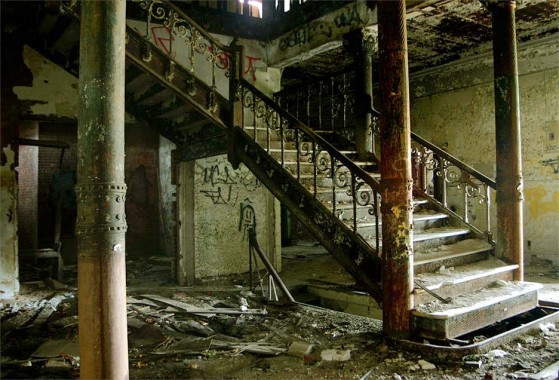 I have recently obtained a cache of recently taken photos by explorer Andrew, who has previously assisted me at the Farm Colony (linked above) and at Staten Island’s Sea of Dead Ships. It must be cautioned that care must be taken when, ah, trespassing here — do it only during the day, as some floors have fallen through, and the building is near collapse.

The detailed columns and balustrades are still intact. 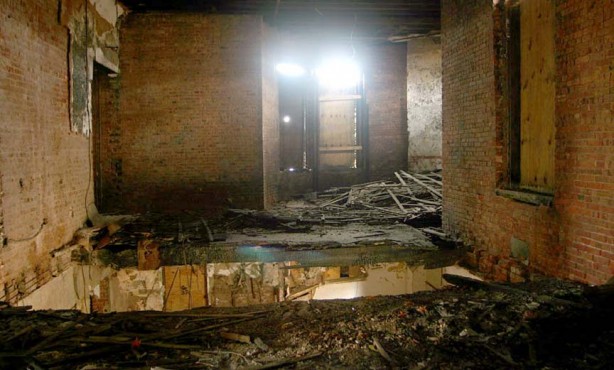 I mentioned some of the floors weren’t intact. 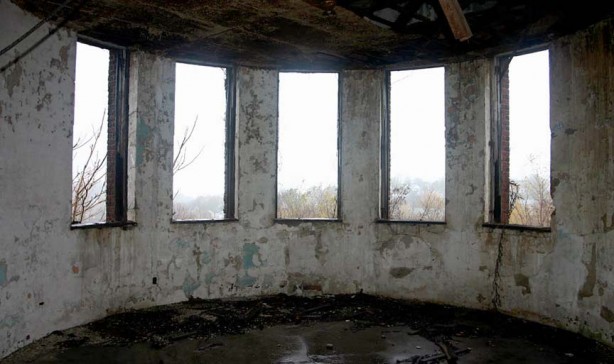 A room with a view. 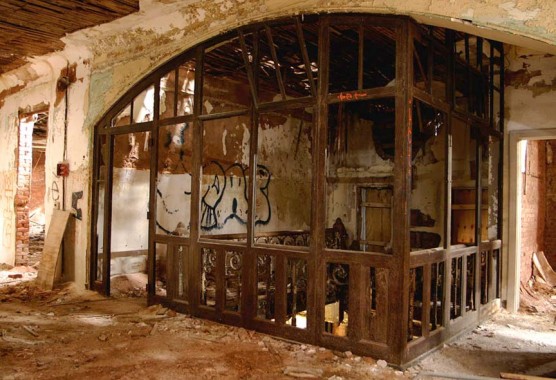 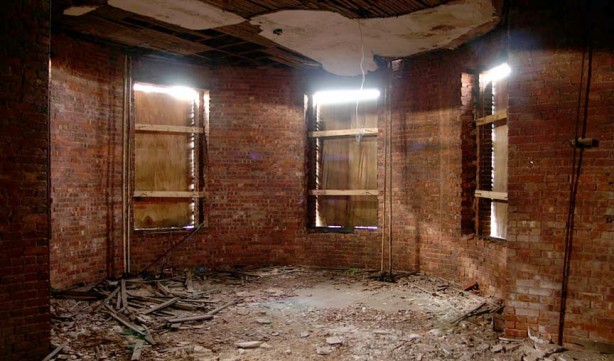 In the 1990s the windows were sealed with wood planks, to keep out birds, rain, etc. These were not maintained and are rotting away. 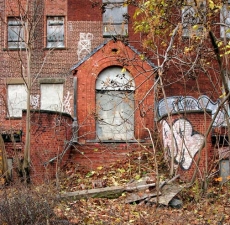 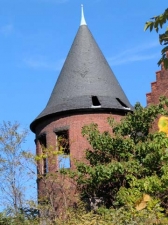 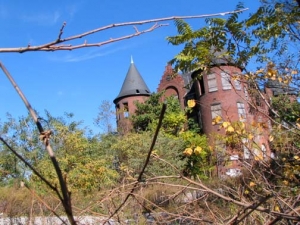 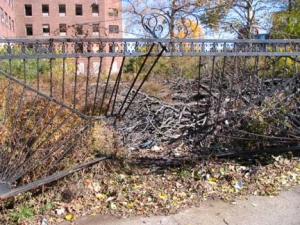 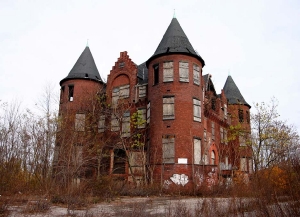 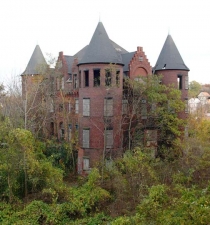 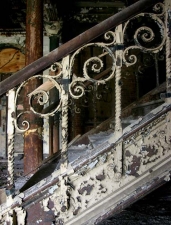 More views of the Infirmary–possibly the last ones 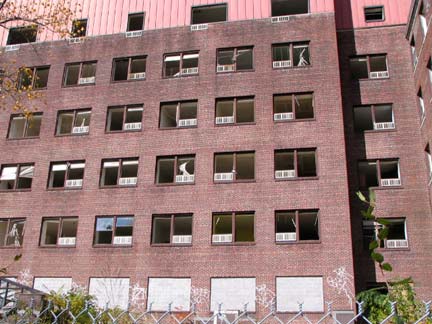 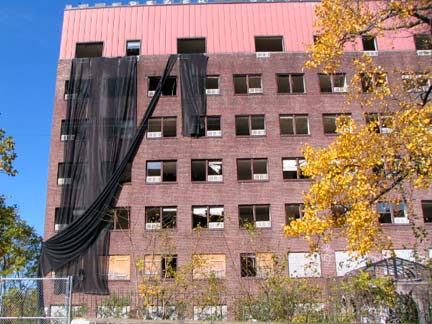 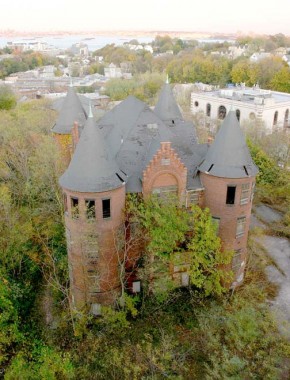 It does provide a view of the Infirmary… 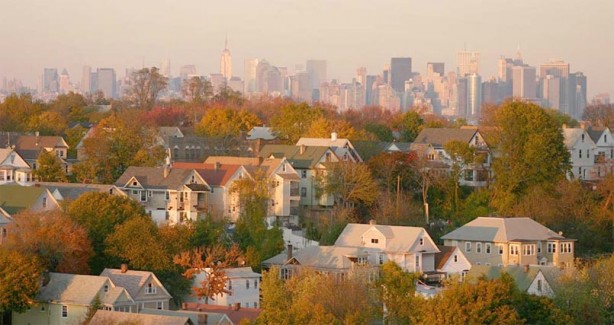 …as well as Tompkinsville and Manhattan beyond. 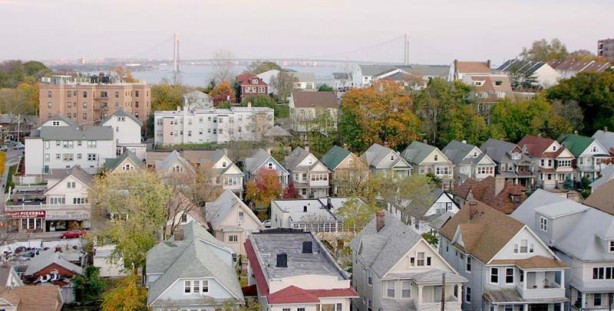 a look past Stapleton to the Verrazano-Narrows Bridge

Clifton and Brooklyn across the Narrows

For a personal recollection of the S. R. Smith Infirmary, see APE SHALL NOT KILL APE

Update: the Infirmary was knocked down in 2012; the land on where it stood remains unoccupied as of 2020.

FLUSHING FROM A-R. Avenues with plant names in Queens

Alas, the infirmary was knocked down yesterday.

Such a shame! More of the Island’s history destroyed.

And a stark contrast to England where, on the visits to friends there, I’m always impressed at the level of preservation of structures centuries older than anything on American shores.

Impressive, too, is how the British value their history and fight to preserve their historic structures while we here simply let them fall into decay until they are too far gone rescue.

Then we use the level of decay to justify knocking them down.

What replaces them is far too many times poorly constructed with the cheapest materials that will do the job resulting in a building that is architecturally nondescript & ugly beyond belief.

Hi, I’d just like to say I’m a huge fan of this site and I also have the book. I just wanted to update you on the status of the S.R Smith Infirmary. Sadly it has been demolished. I pass it often and it was taken down sometime between march and april of this year. But the old hospital next to it still remains. And keep exploring our historically rich city so it will not be “forgotten”.

Was going through some very old family papers and see that a distant relative by marriage (Lucie M. Norton) donated $10,000 for the Norton Pavillion. The hospital looked so beautiful, so sad it was torn down. Would that be the Norton pavillion you mentioned?

My four sons were born in the infirmary starting in 1960. My room was in the rotunda and I had a great view of the Stapleton area. So sad to see such a beautiful building destroyed.

Torn down about 5 years ago.

I was rescued from this building. It became a breeding home for traffickers

My great-grandmother’s sister worked as a nurse at the S.R. Smith Infirmary. I have a “medal” that clearly hung on a chain that shows a relief of the building on the front, plus a red cross at bottom, all surrounded by the name. On the back is inscribed her name. As the name of the infirmary changed to Staten Island Hospital in 1917, she must have worked there years earlier. I’m so glad to read about the Infirmary on this site.

View #4 is St. George .You can see the top of the Bonair apartments on Central Ave. Peeking behind the tree line the Borough Hall tower is visible