There are two Sheepshead Bay Roads in Brooklyn. To add to the muddle, one of them comes in two pieces. The first Sheepshead Bay Road runs from Neptune Avenue and West 8th east one block to West 6th Street. As we’ll see, it used to be quite a bit longer.

The other, more important Sheepshead Bay Road runs from Emmons Avenue in the place of East 18th Street northwest to Avenue Z and East 14th Street, and again from Avenue Y and East 13th northwest to Avenue Y and Gravesend Neck Road. Both this SBR and Neck Road are parts of the original road system in Gravesend and Sheepshead Bay, and survived after the overall grid system was built up in the early 20th Century. 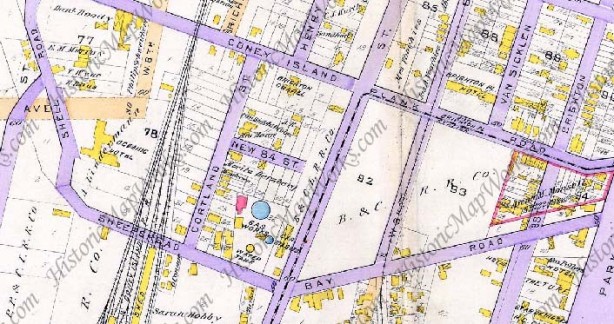 1890 map of the area between Neptune Avenue, Sheepshead Bay Road, Shell Road and Ocean Parkway (visible on the extreme right). Virtually nothing at all remains of the street layout in 1890; most of the streets are gone and the territory consists of a shopping mall on Neptune Avenue (which would bisect the map through the center had it been built in 1890) and the Trump Village housing project between West 5th (in the center, with the surface line or trolley indicated) and Ocean Parkway.

The only portion of this Sheepshead Bay remaining today is the short section running between Shell Road, left, and railroad tracks belonging to today’s Culver Line (F train) just below the Oceanic Hotel. The rest was gradually obliterated over the decades. In 1890 Neptune Avenue ended at West 8th Street; the main east-west road was the Coney Island Plank Road, a western extension of the plank road that became today’s Coney Island Avenue. Coney Island Plank Road was first renamed Neptune Avenue, and in the 1950s, straightened to the configuration known today.

East of Ocean Parkway, Sheepshead Bay Road ran just below the Coney Island Plank Road and was the northern boundary of the long vanished Brighton Beach Race Course, one of 3 major horse race ovals in Coney Island and Sheepshead Bay prior to 1910. In 1890, Coney Island was not the “people’s Riviera” it became after 1920 when railroads became mass transit elevated lines and the borough flocked to the seaside. Rather, it was the bastion of the rich and privileged, who summered by the seaside in dozens of hotels with a water view, and bet on the thoroughbred nags as well. Brighton Beach Race Course was opened by the owners of the Brighton Beach Hotel in 1879. This course, as well as the Coney Island Jockey Club Race Course, thrived until 1908 when the NY State Legislature outlawed gambling in the state. And, Gravesend Race Track operated from 1886 through 1910 and is remembered by the annual Gravesend Handicap at Aqueduct. Though spectator sports such as motor car racing were tried here to keep the facilities going, the tracks were condemned in the 1920s. The tightly gridded Brighton Beach neighborhood, with its Brighton 1st Street, Walk, Road, Path, etc. now occupies the sites of the old courses. 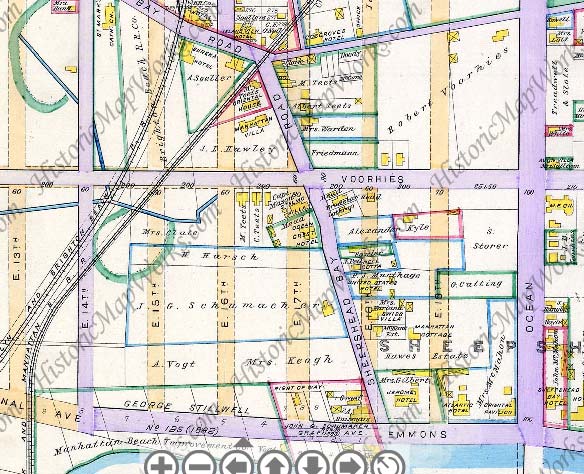 This section of that 1890 map shows the “other” Sheepshead Bay Road, the one that has the stop on the Brighton Line named for it and seves as a main shopping strip in the Sheepshead Bay neighborhood. In the 1890 map, the routes shown in purple are marked in the legend as “open” while those in beige were “not open.” By 1890, Sheepshead Bay Road, Voorhies Avenue (named for a colonial-era settler, Steven Coerte Van Voorhees; Voorhees means “village of Hees”), Ocean Avenue and Emmons Avenue were open. The narrow lane at the top is Jerome Avenue (formerly Voorhies Lane) which ran along the southern edge of the Coney Island Jockey Club, once so popular a spur from theLong Island Rail Road Manhattan Beach Branch served it.

In this era, Coney Island was more or less an actual island, since Sheepshead Bay was connected with Gravesend Bay via a twisting, turning narrow creek.

In the early 20th Century there were plans to dredge the creeks and make Coney Island Creek navigable to Sheepshead Bay via the Gravesend Ship Canal. The canal was never built, the creeks were filled in, and Sheepshead Bay was widened, bulkheaded, and truncated at about East 14th Street in the 1930s.

We’ve seen that in the 1890s, Coney Island was a wealthy resort area. Taking a closer look at that Sheepshead Bay Road plate (available on Historic Map Works, which charges a fee) on Sheepshead Bay Road alone there was the Jerome Hotel, Swiss Villa, United States Hotel, Ocean Crest Hotel, Manhattan Villa, Oriental House, Island View Hotel and Eureka Hotel, the latter abutting the Brooklyn, Flatbush and Coney Island Railroad. Things have changed in almost 120 years, but Sheepshead Bay Road is now a congested, busy pathway from the Sheepshead Bay waterfront into the heart of the neighborhood…

For a time, Sheepshead Bay Road was truncated to run as far east as Ocean Parkway. When Neptune Avenue was straightened and Trump Village was completed in 1963, this ancient road was cut back to its present one-block length. Nothing much to see there now, folks, other than the McDonalds at SBR and West 6th. 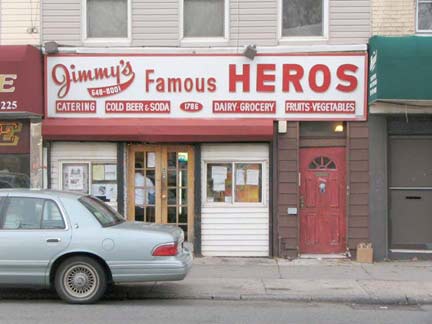 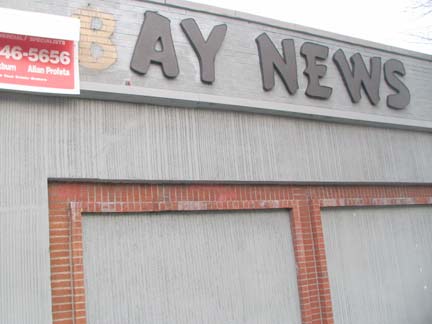 We can eat hero sandwiches, and spell them “heros,” just for one day at Jimmy’s Famous on Sheepshead Bay Road just north of Emmons. Just north of Shore Parkway was the old headquarters for Bay News, one of a large chain of newspapers in Brooklyn recently purchased by Rupert Murdoch’s News Corp. Their online presence is under the umbrella site yournabe. 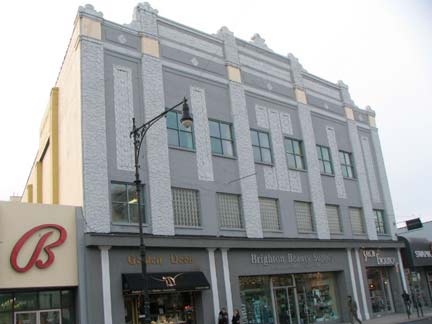 Sheepshead Theatre, on SBR just north of Shore Parkway, was built in the late 1920s. Interestingly it became a roller skating rink in 1977 during discomania; today it is home to a health club and a furniture store. 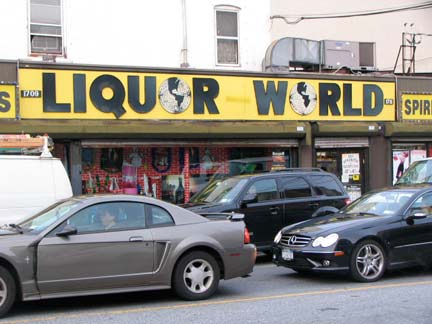 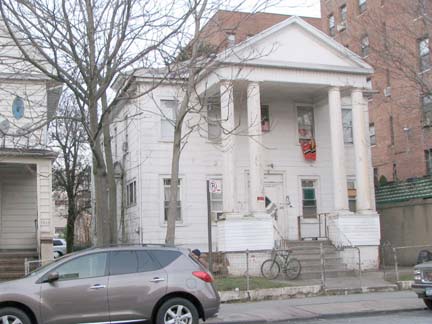 This mini-Parthenon, on Voorhies east of Sheepshead Bay road, must have been a big deal at one time, but it’s home to rentals today. The building was once home to early 1900s cartoonist Winsor McCay, the creator of Little Nemo in Slumberland.

Sheepshead Bay Road and Jerome Avenue, early 20th Century. Though the buildings on the left were pulled down long ago, there are still groceries and drugstores on SBR, now as then. In the background is St. Mark’s Church, the oldest Roman Catholic parish in Sheepshead Bay, organized in 1868. The present building with its lofty campanile was completed in 1931. This photo is looking west. In the front we see the rail lines belonging to the Manhattan Beach LIRR (discontinued in 1924) and in the distance is the Brooklyn, Flatbush and Coney Island rr tracks (today’s Brighton Line, B and Q trains) brooklynpix 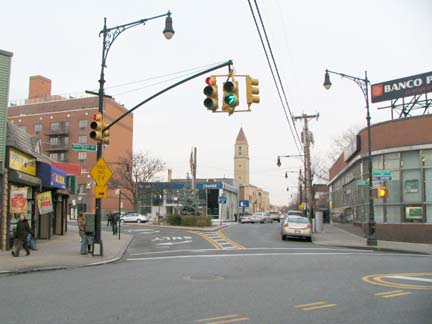 2009, Sheepshead Bay Road is in the foreground and we are facing Jerome Avenue and the present-day St. Mark’s Church. 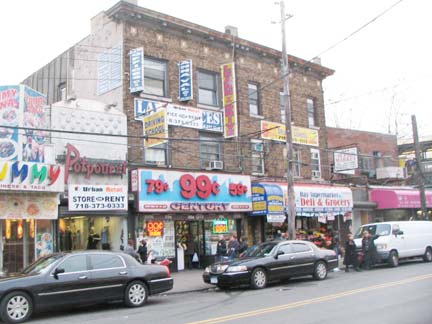 A dense thicket of awning and building signs advertising various wares on SBR’s densest section, between Jerome Avenue and the Brighton el. Though these things have a way of falling through, the buildings are dute to be pulled down for a modern glass-fronted development. 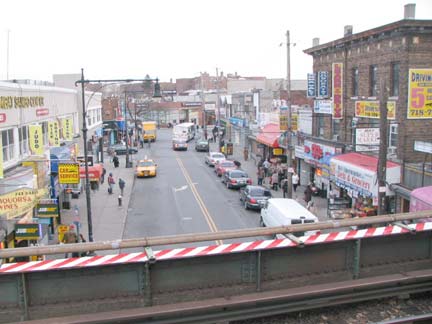 Time to head for home on the Brighton line but not before a last glimpse of Sheepshead Bay Road, looking south.

[…] our walk from the Sheepshead Bay stop on the Q. We followed the meandering Sheepshead Bay Road, a remnant of the original Gravesend system. It winds its way through the grid. Under the Shore Parkway […]

My grandparents and father apparently lived on a street called “Sheepshead Court” up until about the mid 1930’s, when the construction of the Belt Parkway forced them to move. They wound up on E 16st. I can’t find any reference to Sheepshead Court on any of the maps, nor in any records.

Does anyone know where this was?

Sheepshead Court appears on this 1929 Sanborn map – it ran between East 16th and Sheepshead Bay Road right where the Belt Parkway is now. It looks like it continued to East 19th as Deans Lane, which appears to still exist as an alley between 2732 and 2746 East 19th.

My house was built 1850 , 2117 Voorhies Ave. it’s a Giant Queen Anne it might be one of the large Queen Anne houses left in Sheepshead Bay .

I remember the Bucks Queen Anne, bet 21st & 22nd Sts. I lived on 23rd next to the little Church. My house was built circa 1927 by a NY. State Senator named Jamison (I think) He was known as “The Race Track Senator”. FDR slept there when campaigning through that end of Brooklyn. Not sure if he was running for Gov. or Pres. at the time. Al Smith also stayed there. Unfortunately weak attempts to have it declared Historical failed. Google sat. photos seem to show its been torn down. Earlier street view shows it still there.

My grandparents owned Bay electronics. The biggest TV and Air Conditioning Business on the East Coast, unfortunately my Grandfather passed in 1957. They lived right across the street from the Sheepshead Bay Racetrack

BILL JONES
my grandmother Mary Allen lived at 1605 Sheepshead Bay Road. right over Izzo’s Barber Shop. i miss those days and am sad that the Sheepshead Bay i grew up in is slowly disappearing…

my grandmother owned an ice cream parlor on Jerome Ave. not far from train station that had a fountain and a cigar display case and sold comic books.

Great posts. Thank you. Gone but not forgotten. Love to all of you out there. 🙂

I was born (1956) and raised on East 14th Street and Ave Y, one block from Sheepshead Bay Road. In its time it was the greatest place in Brooklyn to grow up. Sheepshead Bay Road had every type of store you can imagine, from the 5&10 to Perrys. Furniture stores, fruit stores, Pizzerias, you name it it was there. We used to do all our Christmas shopping without leaving The Bay Road (A term only someone raised in the area used) it even had movie theater. It has changed so much over the years but the memories last forever.