Despite having both its east and west ends chopped off in various bouts of urban renewal, Duane Street abides nicely. When it was first laid out around 1800, give or take a few years before or after, Duane Street ran from the confluence of New Chambers and Chatham Streets, curving nothwest and then running west across Manhattan Island to West Street and the Hudson River. Beginning in the 1940s, the rat’s nest of little streets in the vicinity of the infamous Five Points area gave way to new construction, and many of them disappeared. The original source of Duane Street is now NYC Police Headquarters, built in 1973; Duane Street opens to traffic west of Foley Square at Centre Street, with a small chunk of the pedestrian plaza facing St. Andrew’s Church (established 1843, present building completed 1939) bearing a Duane Street sign.

In the mid-1970s the 2-block section between Greenwich and West Street was demapped and eliminated to make way for the present Independence Plaza housing and Washington Market Park. In between, there’s still plenty to mull over…

I never hope to enter any one of the courthouse buildings surrounding Foley Square, since mainly defendants, lawyers, and jurists enter them, and I have no chance of ever being one of the last two. Foley Square was named for “Big Tom” Foley, saloon owner and Tammany Hall capo, in 1925, and encompasses the area where Centre and Lafayette Streets form a V, or a triangle with Worth Street. It sits on the site once occupied by the freshwater Collect Pond, used as a dump so long by colonists that it became fetid and was drained into the Hudson by the canal that Canal Street now sits atop.

The sculpture sitting in the center of Foley Square to me resembles a sword and a hilt, or perhaps a raised middle finger. Then again, I have the eye of a dedicated Philistine and have never ‘gotten’ modern sculpture. In actuality, this is called Triumph of the Human Spirit and was styled after an antelope-inspired headdress worn by Mali, Africa natives. Now, why didn’t I get that? It’s so obvious. It’s 60 feet tall, weighs over 300 tons and was designed by Dr. Lorenzo Pace in 2000. I do find it ironic that a sculpture called Triumph of the Human Spirit is sitting in the very place where the predators of society are dragged before the bench to answer for their crimes. RIGHT: the entrance to the Chambers Street station, a BMT station primarily serving the J and Z. In May 2010 M service will abandon the line and join the IND on Queens Boulevard.

In 1849, cast-iron building pioneer James Bogardus built the nation’s first all-iron building at the NE corner of Duane and Centre.

I am standing on Duane Street just west of Foley Square looking at the pyramid-domed US Courthouse. In the 1867 atlas shown right, I’m approximately where it’s circled. Just about everything on the street layout has changed. It would yet be a few decades before Lafayette Street would be extended south and just about every street save Pearl on the right side of the map would be eliminated. See Manhattan Place? It survived as a trash-strewn alley till the 1970s. On the extreme left, New York Hospital, shown in green, once occupied a superblock bounded by Duane, Church, Worth, and Broadway. A small piece of Park Street survives as Mosco Street. That ever so slight bend in Duane Street where circled (by me) is still there.

I skipped past the African Burial Ground Memorial and Elk Street; both are interesting enough to rate their own FNY page sometime soon. I also skipped the Jake Javits Federal Office Building at Duane and Broadway. It looked rimmed with cops with submachine guns. Lord knows what they do to photographers there.

Everywhere you go… this Duane Reade is really on Duane Street and Broadway, where NY Hospital once stood. The drugstore chain began in 1960 by Abraham, Eli and jack Cohen with the distributorship on Broadway between the two streets. Across the street, I was unaware that NY State had an Executive Department Division For Youth. Here’s a story in Ebony Magazine about the department. Of course the sign reminded me of Alice Cooper.

Between Broadway and Church, the south side of Duane is represented by some very old buildings, brick, but with metal ‘porches’ and columns. I enjoyed the medallions with the house numbers on them — this was the rage in the mid to late 19th Century and they are all over Tribeca. Of course the Mouminia Gift and Barber shop reminded me of…Paul McCartney.

There’s some lettering over a century old over the doorways. This closeup is pretty much all that remains.

The other side of Duane between Broadway and Church is another story completely and modernism reigns. The 52-story residential Tribeca Tower (105 Duane) was completed in 1991 and is the tallest in Tribeca; only the AT&T Long Lines behemoth, housing long-distance switching equipment, on Church between Thomas and Worth, built in 1974, competes with it. RIGHT: The New York State Insurance Fund Building, (199) Church and Duane, completed in 1955, has white brick facing Duane street, with a bas relief of naked people to break things up a bit.

122 Duane, just east of Church, was given a humdrum modern facade in what looks like the 1970s, when a lot of this kind of thing was perpetrated. Some original details still poke through the banalities, though, like the address medallion.

An old-school newsstand. Many have been replaced by metal and glass CEMUSA models, but you can still find a number of these around town. RIGHT: ancient sewer grate, Church and Duane. What NYC agency covers what the Department of Public Works used to?

Duane Street between Church Street and West Broadway is lined with Federal style buildings on both sides, some with metal fronts, most dating to the mid-19th Century.

At 146 Duane is one of NYC’s most notable building clocks — look at the intricate metalwork on the bracket. It is a remnant of wholesale shoe company Nathaniel Fisher & Co. When a fire struck the headquarters in 1895, the NY Times reported that it had already been in business for 50 years. The clock may be nearly 150 years old.

At West Broadway and Duane, take a look at the small square ad on the brick building just west of West Broadway, for ‘antiseptic soap.’ I don’t know if this is an authentic ‘faded ad’ — those ecclesiastic-style letters might be just an art director trying too hard.

163 Duane Street, built in 1845 as a whalebone cutting house, forms Montauk Atelier, a high-end condo complex along with adjacent 161 Duane.

Kiddies, balloons, and ice cream on a spring Saturday.

From the ForgottenBook: Duane Street splits in two in Tribeca, with one half ending at Hudson Street and the other half continuing east into the Foley Square area. Between the two halves, you’ll find Duane Park, a spot that has been green since the very beginnings of New York City. It was originally part of a Dutch farm dating to the mid-1600s that later was owned by the Duke of York of England, who gave it to Trinity Church, which owned vast amounts of property in lower Manhattan. The church sold it to New York City for the grand total of five dollars in 1797.

For such a tiny park–it’s only .115 acre in size–Duane Park has had several redesigns over the years. In 1870 it was given trees, a lawn, shrubs, bluestone curbs, and a new iron fence. In 1887, Parks Commissioner Samuel Parsons Jr. and Calvert Vaux, who had co-designed the much vaster Prospect and Central Parks with Frederick Olmsted, designed a new plan featuring pedestrian paths. In 1940 there was yet another plan, featuring more concrete, fewer trees and a new flagpole, and finally, in 1999, Duane Park reversed course, adding more plants and returning to Parsons’ and Vaux’ plan, while keeping the flagpole.

2010 marked the demise of one of Forgotten NY’s lamppost icons at the NW corner of Hudson and Duane, NYC’s most unusual bishop crook. Several years ago it suffered a mishap when the wind blew the crook off the shaft, or it rusted enough to fall off. The Department of Transportation arrived at a makeshift solution by placing a sodium ‘bucket light’ on a curved pipe at the apex. In April 2010 this was removed, probably in favor of a much more boring yet more civically acceptable light post. ABOVE RIGHT: a day before demolition

Duane Street was once the heart of lower Manhattan’s wholesale “butter and egg” district, a part of the larger wholesale Washington grocery market in which goods were unloaded along the many working piers along West Street. The market disappeared when the World Trade Center was built, and the waterfront lay unoccupied for many years until the city began turning it into parkland.

Above: Duane Park is lined on both sides with brickface and cast-iron front buildings that go back to the mid-19th Century. The narrow alley known as Staple Street is a reminder of how ‘staples’ had been bought and sold in the area. 171 Duane, left, was owned by Ephrain Treadwell, a “shipbread and cracker baker” and was later occupied by wholesale egg company M. J. King. Sidewalk canopies left over from the old business days are still in place.

Along with Waverly Place in Greenwich Village, Duane Street splits in two, with the left side ending at Hudson Street and the right side proceeding on to Foley Square.

At 181 Duane, near Greenwich, is another sample of mostly illegible print on a building front. Many buildings on the Lower West Side are so marked, showing the businesses found inside.

Across the street, though, is a much more obvious example…

188 Duane Street is the former home of the Lappin Tea Company, among other tea wholesalers.

I’m having trouble making out the markings, which have faded just past the point of legibility. See what you can do with them…

“The kind of tea they use in Ireland”, a Lappin Tea slogan. 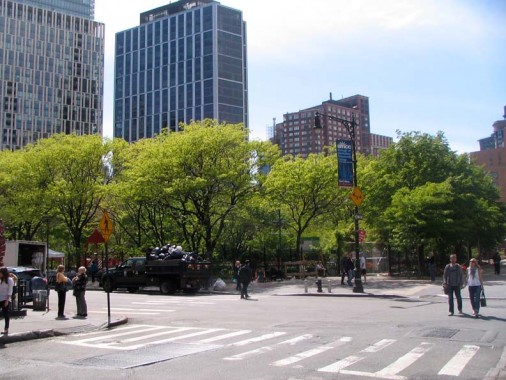 The west end of Duane Street at Greenwich. Washington Market Park, founded nearly 30 years ago after the destruction of the market area and construction of Independence Plaza and the World Trade Center, is Tribeca’s only green space of any size at 1.6 acres; prior to its construction, Battery Park was the green mecca for Tribeca’s then few residents — the area, believe it or not, was rundown and slumlike until the 1980s.