On a way more brutally hot Saturday than my post-operational stamina had any right to be enduring, I weaved my way pitifully through Pelham Bay in the Bronx, a mendicant seeking what crumbs the neighborhood would toss an amateur seeker of hidden urban secrets. After gingerly crossing a broken glass-strewn, pockmarked, graffiti-smeared expressway overpass, I saw them…a whole block’s worth of relics from 1959, when Robert Moses’ engineers bruited the Bruckner through this Bronx neck untrammeled except by its residents by birth, and motorists on their way to Connecticut.

In the beginning there was Whitlock Avenue in Hunts Point, which begat, when it was extended northeast, Eastern Boulevard. And lo, anon, Eastern became Bruckner in 1942 to honor a Bronx chieftain of eld (er, ah, a former borough president) and assumed the routes of Ludlow Avenue in Soundview and Willow Lane in Pelham Bay. At length, between 1954 and 1961, Bruckner became Expressway, and pedal met metal throughout the land.

Though Bruckner Boulevard was outfitted with Triborough Bridge-style lampposts from the 1930s to the 1950s, no doubt to stratify and standardize its connection with the bridge, when it became an expressway it received a new style of cylindrical-shafted posts that set the template for expressway lampposts for the latter part of the 20th century. At first the new poles received Westinghouse “cuplights” and later, sodium vapor lamps. Most of the 1950s posts were replaced by taller, yet still cylindrical-shafted, posts in the 1980s. But, clutches and nests of them still remain… 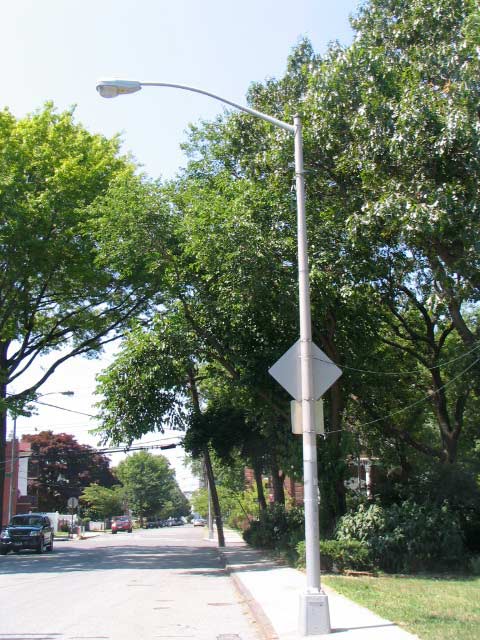 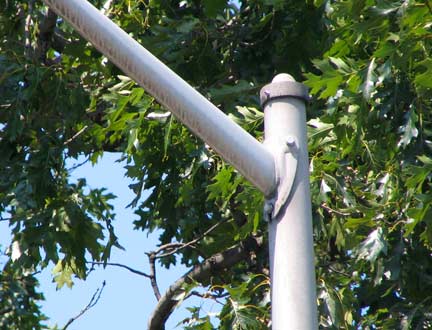 In Pelham Bay, just after crossing the pedestrian bridge forgotten by all except teenage beer drinkers and graffitists, you find yourself on Baisley and Hollywood Avenues. This Hollywood isn’t where celluloid heroes never feel any pain and never really die. This Hollywood is a Valhalla for a former lamppost style since superceded.

The section of Hollywood Avenue running south from Baisley Avenue and joining Bruckner Boulevard, which now serves as a service road to its namesake expressway, contains vintage Bruckner Expressway lampposts that the Department of Transportation has seen fit to maintain in place. They’re distinctive because of the relatively lengthy distance between the top of the shaft and the mast, as seen in the above photo. 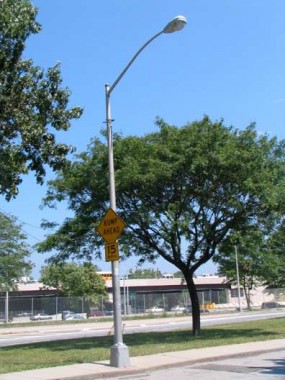 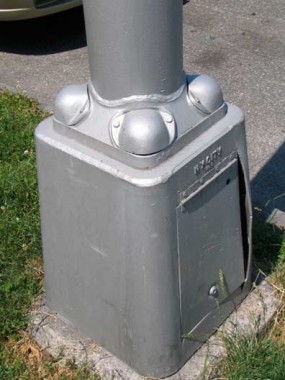 The design, new in the 1950s, has proven to be a timeless classic — in NYC, at least, everything that followed this post is simply a design modification of these poles. 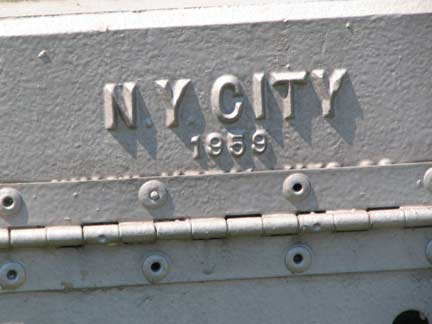 In NYC, determining the age of most octagonal-shafted (i.e. standard street posts) is a fairly easy thing to do since the date of installation is stamped above the door that opens to the electronic interior controls. On the octa-poles, though, the date is stamped, which means it can wear down, or disappear through repeated repaintings.

Not so on these Bruckner posts. The date of installation, 1959, is actually on raised lettering that has proven quite resistant to ravages of weather and wear. I’m not sure if these dates will ever match the enthusiasm that dates on coins have for numismatists, but I’m an avid lamppost date reader, and always try to find ones from the 1950s — they’re getting scarcer.

YEAH, THEY STILL HAVE SOME OF THESE ON THE STATEN ISLAND EXPRESSWAY AND THE GOWANUS. I ONLY SEE THIS DESIGN ON THE EXPRESSWAY THOUGH.