I was desultorily ambling south on Lexington Avenue on the Monday afternoon of August 2, 2010 after a meeting with the director of the Museum of the City of New York on 5th and 104th (if my aims at the meeting bear fruit, I’ll let you know*, but there’s no reason to even hint at what may transpire, since anything at this point is a longshot) in the Upper East Side neighborhood called Carnegie Hill, named for the Andrew Carnegie mansion on 5th and East 91st, now the Cooper-Hewitt National Design Museum. I was lamppost hunting on Lexington, and when I reached East 103rd Street…

*They didn’t — I wanted to mount a lamppost exhibit, as I had at the City Reliquary in Brooklyn) 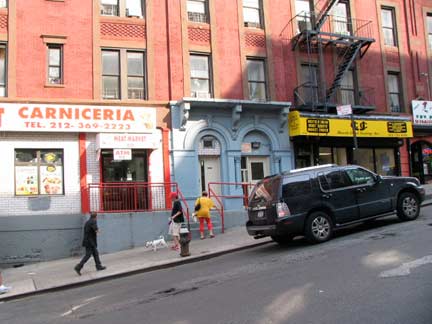 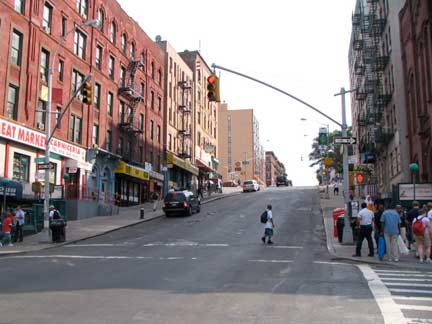 … I was forced to clamber up one of the steepest hills in Manhattan south of Inwood, if not the steepest, on Lex for just one block between East 102nd and 103rd. This isn’t Carnegie Hill proper — that is the much tamer hill that forces the Metro-North out of its Park Avenue tunnel and onto a stone and concrete trestle at East 97th. But this is almost San Franciscan in its angle. 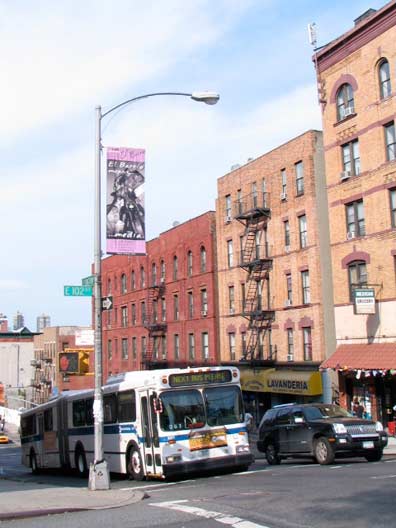 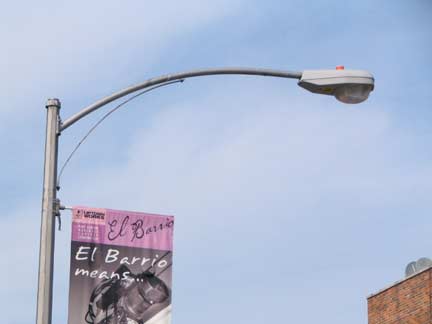 And at the top of the hill, the first of four gifts awaits the NYC lamppost connoisseur (well, I think NYC lamppost king Bob Mulero and I are the only two in town): a vintage 1950s curved-mast pole. These came in a variety of sizes and shaft heights. Most were erected at the dawn of the octagonal shafted NYC lamppost era, which began in 1950. Soon after, straight masted posts took over from the curved and bracketed models. 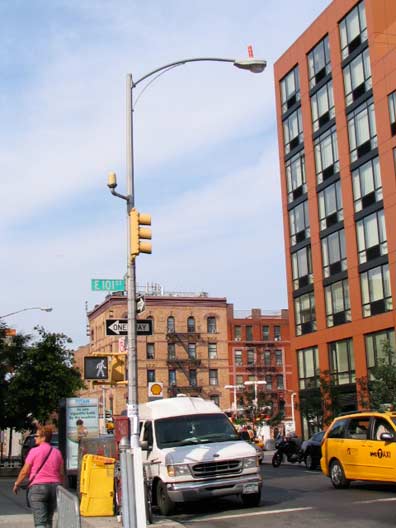 East 101st. When first erected his post likely carried a Westinghouse AK-10 “cuplight” and also likely bore its fire alarm lamp, a globe-shaped object in 1950, mounted on top of the cuplight, so the two lights resembled a dumbbell.

This lamp carried second and third generation fire alarm indicator lamps: the curved bracket with the cylindrical plastic diffuser, which have recently been outmoded, replaced by the “top hat” indicator mounted at the top of the light.

It all seems moot anyway, as the city has announced that it will decommission fire alarms in the near future; they are now inefficient as they account for a great deal of false alarms, and handheld communication devices are largely outpacing public alarms as a means to alert officials in case of fires or crimes.

This lamp has lost its finial cap. 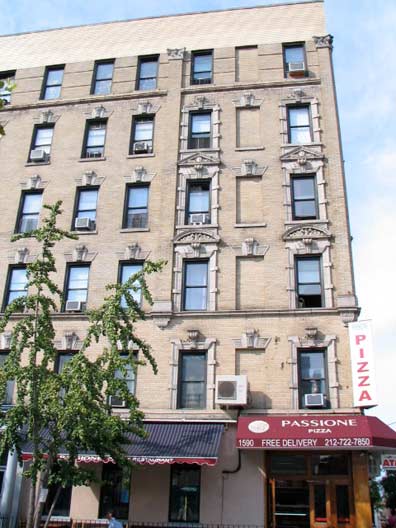 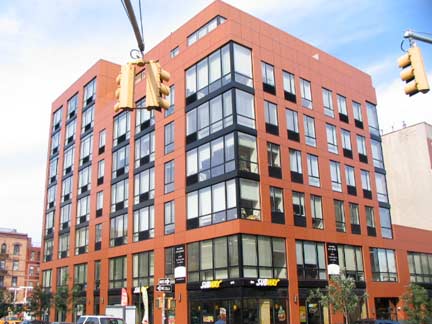 Two different architectural philosophies face each other at East 102nd across Lexington: the highly ornamented Beaux Arts style that reigned from 1895-1915, and the highly streamlined style ushered in by buildings like the UN Building and Lever headquarters on Park Avenue in the early 1950s. I actually like the new building, especially the corner window wraparound. 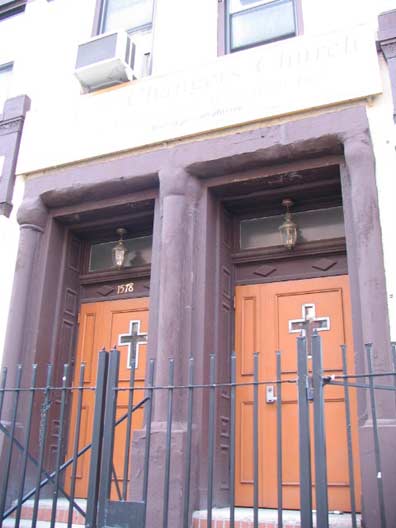 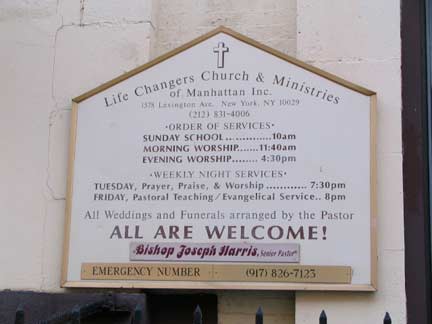 Small churches are a frequent sight in Manhattan on avenues and side streets, especially above 96th Street. They can be shoehorned into storefronts or they can occupy the ground floors of residential buildings like this one on Lexington near East 101st. 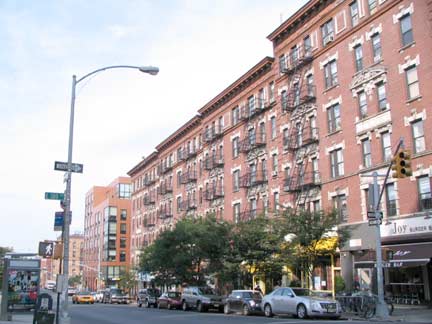 The official name of the straight shafted, curved mast post was Type 8S. Here one guards the NW corner of Lexington and East 100th. 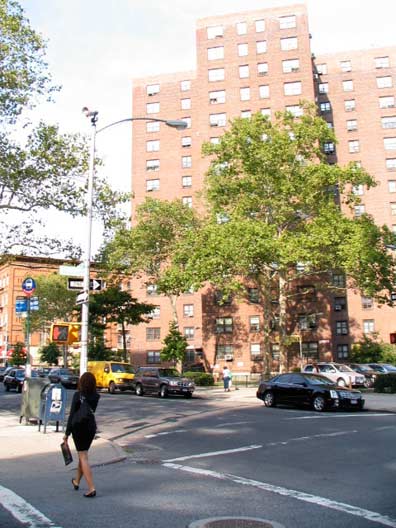 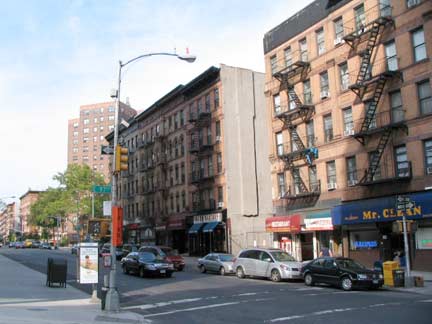 The final two of Lexington’s curved-mast survivors are on the NW corners of East 97th and East 98th Streets in the shadow of the Lexington Houses.

The Department of Traffic (as the Department of Transportation was known in the 1950s) should have never promoted the single mast lamp ahead of the curved mast beauties, but their rarity now only adds to their allure. Short-shafted variants once lined side streets and minor avenues by the thousands — today, there are a few dozen remaining in the five boroughs.

From WINDSOR TERRACE to KENSINGTON

DOES ANYONE KNOW WHY NYC CHANGED ALL OF ITS STREETLIGHTS AND REPLACED IT WITH THAT UGLY ONE FROM THE PICTURES ABOVE??? I REMEMBER GROWING UP AND COUNTING HOW MANY DIFFERENT KINDS OF FIXTURES THEY HAD FROM THE 80’S AND ON!! MY THEORY IS THIS, IF THE LIGHTS WORK, DON’T CHANGE IT!!!!!