The banking industry has gone through many changes. Look around. Twenty years ago if you had an account at Westminster Bank and keep it active, you would have automatically been a Fleet Bank customer. If you continued with Fleet, you would have instantly become a Bank of America customer.

Remember the trusty bank book? It has been made virtually obsolete by statement banking. Then there’s the ATM. Before the advent of ATM technology, you’d physically have to go to the bank usually between the hours of 9am-3pm to do a transaction. Usually, you’d have to forget about making a withdrawal on Saturday or Sunday.

With all these changes, banks from yesterday have left many traces around in New York City. Many banks left buildings that were constructed in a way to give the image of stability and safety for your money. Many were demolished. However, some have been recycled into new uses. Some have merged to form today’s recognizable names such as HSBC, Bank of America and Commerce Bank. Others have faded and are only a memory such as Freedom National Bank, Kings County Savings Bank, South Brooklyn Savings and many more.

Forgotten NY is fulfilling its mission to keep alive some of those memories.

On the NW corner of 116th Street & Madison Avenue in Manhattan, the former Public National Bank has left its imprint. Not much is known about the bank except that it was formed in 1908 and merged in 1955 to form the State Bankers Trust Co. Amazingly, the bank’s name is still visible.

LEFT: If some banks “look” like a bank, this fits the bill. Located on the SE corner of 116th Street & Madison Avenue in Manhattan. The bank has been recycled into the Mt. Zion A.M.E. Church. RIGHT: Need a pharmaceutical product, candy, razor blades, etc.? If you live near this CVC on the NE corner of 96th Street & Amsterdam Avenue in Manhattan, this may be the place for you.

ABOVE LEFT: Formerly the Mechanics & Traders Bank at Franklin Street & Greenpoint Avenue in Greenpoint, Brooklyn. The bank later, after a series of mergers, became JP Morgan Chase. CENTER: A Forgotten NY aficionado who lived or lives near this bank turned restaurant at Park & Tremont Avenues, Mount Hope, The Bronx, could be of help in identifying what bank this was. It had previously been the “New York Capital Bank” or so the sign says (the old NY Central RR, now Metro North, runs down the middle of Park Avenue). The photo right, though, reveals an older name, which was Bronx Savings Bank; it merged with Apple Bank for Savings in 1986. 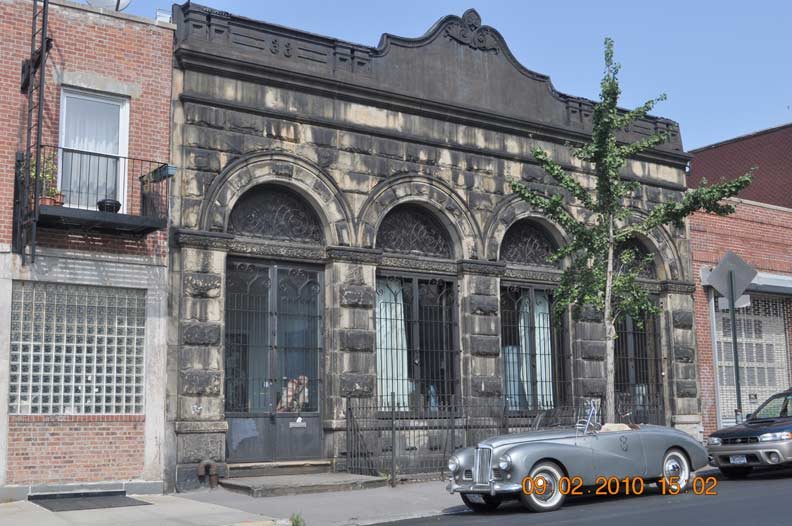 The lonely structure on Grand Street between Kent and Wythe Avenues in Williamsburg, Brooklyn sure could use a cleaning. It reminds me of the condition of the exterior of the original Pennsylvania Station during the early 1960s. The lack of exterior cleaning at the original Pennsylvania Station, in addition to the worsning financial condition of the Pennsylvania Railroad gave impetus for its demolition in the†early 1960s. Luckily that wasn’t this building’s fate. In its early life, it was originally North Side Bank and later Manufacturers Trust Co.

ForgottenFan Bruno DeVuono says it is a Sunbeam Talbot Coupe.

LEFT: At the SW corner of Washington and Tremont Avenues in Belmont, Bronx sits a former bank that is now the Morning Star Full Gospel Assembly. What bank was this? RIGHT: If you pass this discount store on 138th Street, immediatrely east of Willis Avenue, in Mott Haven, Bronx, it would be difficult to imagine that it was ever a bank. Manufacturers Hanover Trust closed it during the late 1980s.

This former branch of Kings County Savings Bank, South 6th Street and Bedford Avenue in Williamsburg, Brooklyn, has previously made an appearance on FNY. However, the camera missed this gem. My inquisitive Nikon found this very easy to miss decoration.

Want to lose weight or tone up? This gym might be the place for you at Union Street & 5th Avenue in Park Slope, Brooklyn. It was earlier a performance space. Manufacturer’s Trust left its imprint on the side of the building that faces Union Street. After a swreies of mergers, MT became JP Morgan Chase.

ABOVE LEFT: If you get a Big Mac attack, this is one place you could do it at the SW corner of Nostrand & Church Avenues in Flatbush, Brooklyn. Look close: Lincoln Savings Bank has left its trace. ABOVE RIGHT: The Fulton Savings Bank at Caton & Flatbush Avenues left an iron sign as part of a display window.

Until the late 1980s, Manufacturers Hanover customers could bank here at Dorchester Road & Flatbush Avenue in Brooklyn. The building has been converted to the Emmaus Seventh Adventist Church.

In today’s tough economy, many people have no bank accounts. Therefore this check cashing store, er, financial center will come in handy at Flatbush Avenue near Bergen Street. It was Citibank in its final days as a bank.

Brooklyn’s tallest bank building in Hanson Place can be seen from many parks of Brooklyn. For many years, it was Brooklyn’s tallest building. An apartment building on Lawrence Street near Willoughby Avenue in Downtown , Brooklyn has taken that crown. The Williamsburg Bank tower, constructed in 1928, can claim this: it has the world’s highest four-faced clock. Formerly home to dozens of oral surgeons (“the House of Pain” it is now, as One Hanson Place, hoem to luxury condominiums and is the winter home of the Brooklyn Flea market.

The confluence of Atlantic, 4th and Flatbush Avenues gave high hopes to developers in the early 1920s. It was thought the construction of the Williamsburg Tower would stimulate other Manhattan-like construction in the area. However, the Great Depression in 1929 squashed that thought.

LEFT: Manny Hanny, as Manufacturers was called, had many branches in the Bronx. This former one at Union & Westchester Avenues in Morrisania was axed.

3rd from left: As a rookie bus operator in 1982, I cashed my weekly, or depending on how you looked at at it, weakly paycheck here at a Chase Bank at East 174th Street & Boston Road in Crotona Park, Bronx under the shadow of the Bronx IRT.

RIGHT: At Sheffield & Sutter Avenues in Brownsville/East New York, Brooklyn was a branch of Banker’s Trust. I know this personally because I used to cash my paychecks here. It closed as a bank sometime in the 1980s. 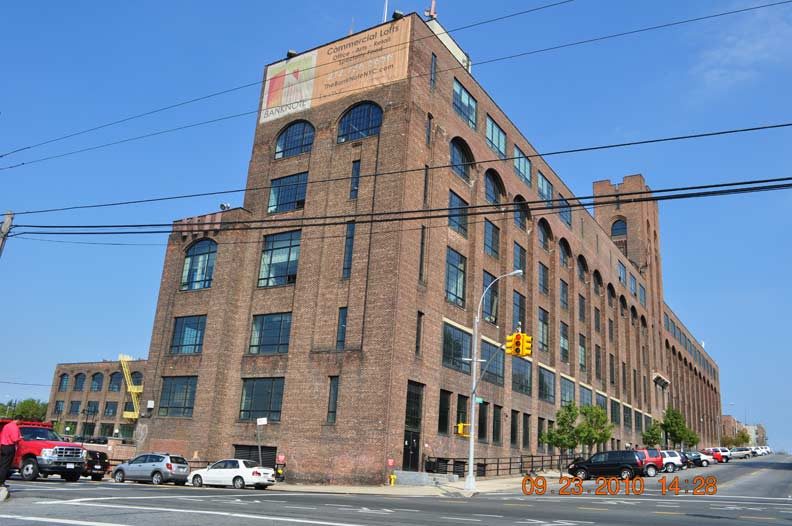 Although not a bank, it was in the strictest sense a financial institution. American Bank Note has its production facilities here at this location on Lafayette Avenue & Tiffany Street in Hunts Point, The Bronx. Here, currency was printed for many Spanish speaking countries. Stock certificates and other financial documents were also printed here.

Photos and text by Gary Fonville.

CHRISTMAS IN THE VILLAGE