During my recent walk from downtown Brooklyn to Crown Heights, I was meandering down Montgomery Street when, just past Nostrand Avenue I spotted an odd little part-dirt, part Belgian blocked path issuing forth toward the southeast. Actually I was doing more than meandering because I had chosen to walk Montgomery Street specifically so I would go by this now-neglected passage — because this, like so many other out-of-the way, unsung and uncelebrated pathways and artifacts, is a snapshot of the far past, a window that looks back toward the colonial era of Brooklyn, when snipers challenged red-coated Brits for domination of Long Island, and perhaps even earlier, when Native Americans drank from springs and raised crops.

Forgotten path, half dirt and half Belgian-blocked. A battered sign designates it as Clove Road.

The northern part of this one-block path is, in effect, closed to traffic as there is a lamppost smack in the middle of the intersection with Montgomery Street. The west side of the path is paved with Belgian blocks of indeterminate age.

Nearing Empire Boulevard. While it’s true the southern part of Clove Road is paved, it’s also clear that the city hasn’t bothered to repave it for what looks like several decades.

Clove Road ends at a rent a car place on Empire Boulevard and here, too, it looks like the DOT put a lamppost right in the roadbed! Traffic is not permitted access north from here.

In fact the only vehicular access on Clove Road permissible is from its one-block tributary, Malbone Street, which runs for one block between Clove Road and New York Avenue.

Malbone Street runs past some 1970s-era tract housing and a parking lot, ending at a police precinct on New York Avenue.

So, what’s the deal with these two odd little Crown Heights pathways? An 1850s map of the area shows a “Canarsie Plank Road” running off to the southeast, at the intersection of Montgomery and Nostrand. Meanwhile, on an 1886 map of this general area, an “Old Clove Road” is shown zigzagging about on either side of Nostrand Avenue from about Montgomery north to Atlantic Avenue. Meanwile, I have circled in red where Clove Road is today. In 1886 the mapmakers assumed the existing portion of Clove Road would be eliminated for good, but it’s the northern section that disappeared, instead. 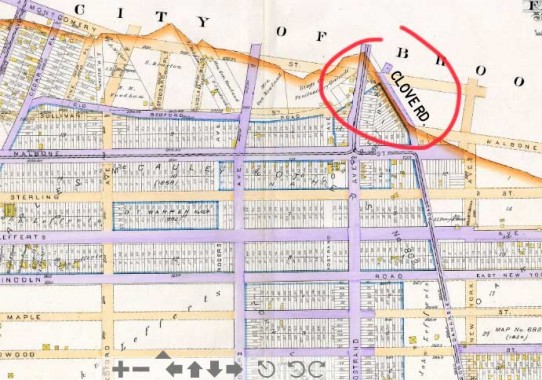 On this 1890 atlas, paved streets are shown in purple. You can see that today’s street layout was still in flux, and very few houses are shown on the building lots. I’ve circled in red the surviving portion of Clove Road. Meanwhile, Old Bedford Road, now pretty much in the path of today’s Sullivan Street, has disappeared. Montgomery Street itself has been mapped, but not yet laid out.

Both Old Bedford Road and “Old” Clove Road are remnants of a colonial-era road system that existed in Brooklyn before the farms were divided int lots, paved over and the prevailing grid built. Old Clove Road ran south from Jamaica Plank Road (Fulton Street, in its present straightened form), meandering southeast to about today’s Empire Boulevard, where it became Canarsie Road, later Canarsie Avenue, which continued southeast along the west side of Holy Cross Cemetery. It then turned east along today’s Cortelyou Road, entering Canarsie and running past the historic Pieter Claesen Wyckoff House. Clove Road takes its name from the Dutch “kloven” meaning cleft and thus was originally a road that ran in a valley between two hills — Clove Road in Staten Island is a much larger example and there, the hills are still intact. They’ve been leveled here.

The jagged orange line at the top of the map is the borderline between the towns of Brooklyn and Flatbush. Originally Kings County contained six separate towns. Brooklyn became a city and absorbed all the other towns by 1894, only to consolidate with Greater NY City in 1898. One abiding mystery for me is why the Flatbush-Brooklyn border zigged and zagged as much as it did. Perhaps there was a long-buried spring there that the border followed. In any case, today’s Clove Road remnant follows part of that old borderline.

Meanwhile: also note the east-west Malbone Street, which probably is a contracted form honoring St. Marylebone, a district in London, England. As is well-known, most of Malbone Street was renamed Empire Boulevard in the aftermath of a disastrous train crash on November 1, 1918 that happened under a Malbone Street overpass. What is less-well known is this surviving portion of Malbone Street. A look at the 1890 atlas above confirms that Malbone Street then made a jog to the southeast….

Forgotten Fan Laurence Prusak: Malbone St is named after Ralph Malbone, a grocer who lived on Fulton St in the early 19th Century. He built a popular inn on the Clove Rd for passenger coaches going from Bedford to Flatbush and beyond around Montgomery St and developed that rustic neighborhood-which was then called Malboneville for at least 25 years or so. 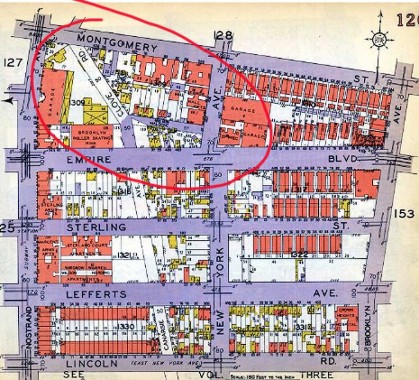 …but by the time this 1929 Belcher Hyde atlas was published, Malbone had been renamed Empire Boulevard and rammed through the previous zig zag area. This cut off a small part of Malbone Street, which has hung in there to the present. By 1929 the Clove Road-Malbone Street layout had crystallized in its present form (and even the paved and nonpaved sections of Clove Road are shown). Note, though, the ghost of Canarsie Avenue running south. Because it was a former streetcar route it would take several years before that ghost could be exorcised, but few traces remain by 2010.