I posted a page of Little Neck in winter last year [2010], and since arctic conditions temporarily took control lof the area in mid-January 2011, I thought it would be a good idea to do it once again, especially since I didn’t have to stray extremely far from Forgotten New York Headquarters to do so. I may not have expressly stated it previously, but even though I am able to function in summer, the heat and humidity wears me down to a nub by Labor Day every year; and I don’t feel fully dressed unless I can wear a jacket. Psychoanalyze that any way you wish, but I have always felt more contented and grounded in cool and cold weather. I would be completely ineffectual if forced to reside in equatorial regions or the Pacific.

Today, I wandered on the maze of roads south of Northern Boulevard and west of Little Neck Parkway. This land was once owned by Bloodgood Haviland Cutter (1817-1906). Known as the “Bard of Little Neck,”, he was a potato farmer, poet and friend of Mark Twain, who immortalized him as the “Poet Lariat” in Innocents Abroad. Twain poked fun at Cutter as a master of doggerel who annoyed fellow passengers on an excursion to the Holy Land in the travelogue. B.H. Cutter’s grave, marked by a large cross, can be found in the nearby Zion churchyard on Northern Boulevard.

Annadale Road, seen in the title card, features many homes on large plots set back from the road with voluminous lawns.

Browvale Lane curves along a ridge looking down on Northrn Boulevard, which runs through a valley, hence its name. Like its neighbor streets, it features standalone homes, but on smaller plots. 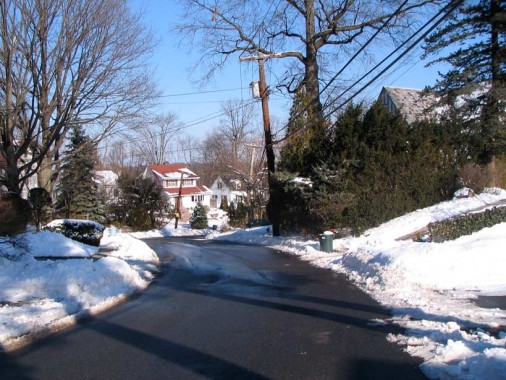 … running the gamut from Tudors to colonials to jewel box cottages.

Aunt Bella’s Italian Restaurant, Marathon Parkway and Beech Knoll Avenue. I have never been inside, but have had their fare delivered dozens of times. Right: 45-17 Marathon, near Northern. The cool kids say contextualism in architecture is dead as dishwater, but this looks nothing like anything near it, and that ain’t right.

Northern Boulevard looking toward Marathon Parkway in 2011, and the same scene in 1926, when the road was being excavated so the boulevard could be widened as the Mosesian era of the motorcar had arrived. As you can see, the shingled house was there in 1926 as today, and the brick storefronts with apartments above are still there, as well. The cemetery is now a Stop ‘N Shop parking lot, and the firehouse with tower has given way to a Mickey Donald’s.

Paul Graziano of Historic Districts Council: The Matinecock cemetery [mentioned on a previoius iteration of this page] was on the north side of Northern Boulevard, not the south. It also was east of Marathon Parkway, not west. The property where the Stop & Shop is was a three-hundred year old farmhouse (I think it was the Willet family that owned it) that was demolished in the late 60s for the shopping center.

The cemetery actually was located where the Queens County Savings Bank building is, west of the Scobee Diner. The Scobee Diner was actually the site of the ancestral home of the Waters family; LaRock Waters still lives just north of the Scobee in a century-old house. His family truly is the last of the Matinecocks…his cousin lives around the corner from me in Flushing. I interviewed LaRock a few years ago about all of this stuff. The Waters family has lived at that intersection (Little Neck Parkway and Northern Boulevard) for at least 500 years – that’s where the tribal village was located. I also have documentation to that effect from a book on historic buildings in Little Neck and Douglaston from the 1920s.