In early 2010 I emerged into sudden lucidity to find myself puttering about Hunters Point, the lip of Queens just north of Greenpoint and the Newtown Creek. Hunters Point had once been a Queens hotspot, since until 1910 it was the western end of the Long Island Rail Road (ferries carried commuters across the mighty East until Pennsylvania Station allowed the LIRR to enter the previously prohibited precincts of Manhattan). Hunters Point had since sunk into moribundity, with only landmarks such as the Penn Station Powerhouse to mark its presence. In the 2000s, though, it’s become a residential hotspot, with looming towers, despite the lack of a supermarket and other amenities.

A giant Pepsi-Cola neon billboard dominates Gantry Plaza State Park at the East River waterfront. The sign is accessible via a walkway leading to the park from 5th Street and 46th Road. Formerly, the sign was best seen from Dag Hammareskjold Plaza at East 47th Street and 1st Avenue, but happily, the creators of Gantry Park have made it truly accessible to Queens parkgoers.

The sign, which was originally built in 1938, is all that remains of a Pepsi-Cola bottling plant that formerly occupied the Hunters Point waterfront.
As a point of pride, in 1938, the LIC Pepsi bottling plant installed the company’s largest neon sign on the facility’s rooftop. Built by the Artkraft Strauss Sign Corp., the structure comprised a 120-ft.-long sign grid covered with the product name. Shaped in the classic, 1930s, Art Deco, cursive script, the letters were formed with open-face channel letters outlined with exposed, ruby-red, neon lighting. Capitals “P” and “C” stood approximately 44 ft. high. Smaller letters ranged from 15 to 18 ft. high. Pepsi purists note that the “double dot” colon, which appeared with the original Pepsi name, was replaced by the dash in 1942 to “modernize” the logo. Signweb

Note the relatively modern Pepsi bottle neck logo (in use from 1970-1987). It was added when Artkraft Strauss refurbished the big sign in 1994.

Pepsi-Cola was first formulated by pharmacist Caleb Bradham in New Bern, North Carolina, in 1898 as “Brad’s Drink.” Within its first year of production it was renamed Pepsi-Cola from the digestive enzyme pepsin and kola nuts, which were both in the formula.

The Queensboro (59th Street, Ed Koch) Bridge, opened in 1909, 11 years after Pepsi was first sold, is visible from the northern edge of the opened portion of Gantry Plaza state Park at about 46th Avenue.

At some point in the future, the south end of Roosevelt Island, visible from Gantry, will be opened to the public as Southpoint Park. For now, it’s open only on special occasions, such as the Open House NY weekend in October. Two ruins, one vast, the other tiny, have been left in place: James Renwick’s Smallpox Hospital, built in 1856, and the 1890s Strecker Memorial Laboratory, once a premier site for bacteriological research.

The Queens West high-rise apartment complex first appeared in 1998 and has slowly spread out along the waterfront west of 5th Street from 46th south to 50th Avenues. Gantry Plaza State Park opened in tandem with it, and has grown along with the apartment development. Though the complex has been successful, some say it has overtaxed resources in the Hunters Point regon, and a shopping and restaurant center has never really sprung up along Vernon Boulevard, the main north-south route.

Gantry Plaza State Park has been carefully modeled to take advantage of the Manhattan views by landscape architects Thomas Balsley and Lee Weintraub. Anable Basin is a short inlet of the East River north of 46th Avenue.

The Long Island Rail Road used to have a short spur track leading to the waterfront between 48th and 49th Avenues; Vernon Boulevard spanned it with a truss bridge that was razed in the mid-1990s. The railroad cut was filled in during the first decade of the 2000s, but Gantry PLaza State Park architects clebverly left some of the tracks in place here, and laid darker color bricks to mark the tracks’ passage elsewhere.
l 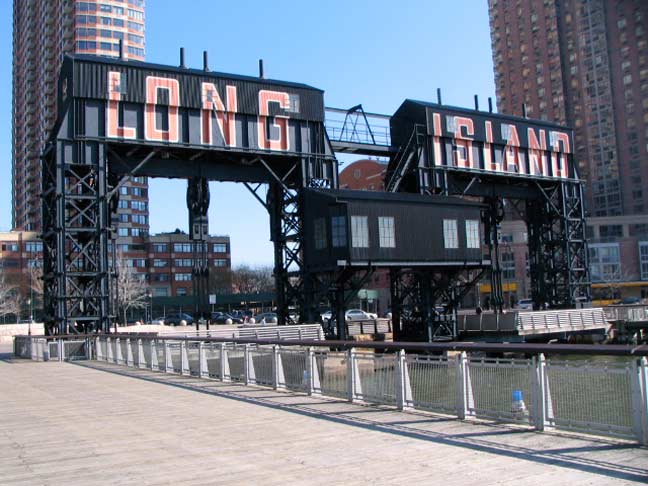 Gantry Plaza State Park is named for the massive cranes, known as gantries, that were used to load and unload rail car floats onto railcars that used the spur track to the main LIRR tracks. From there goods could be transported to the Island or over the Hell Gate Bridge to northern New York and New England. Four of the gantries have been left in place as silent witnesses to Hunters Point’s industrial past.
l

l
McKim, Mead and White’s Pennsylvania Station Powerhouse was built in 1909 when the Long Island Rail Road deemed it necessary to electrify most of the western portion of the railroad in Queens and Nassau Counties in preparation for the opening of the East River tunnels leading to the new station. Its former hallmark was four immense smokestacks which defined the Hunters Point skyline, They were demolished in 2005 as part of the powerhouse’s conversion to residences. Some rounded elements in the condo complex amount to faint echoes of the towers that once were.
l
2/2/11
gantriesHunters PointLong Island City
0 comment
FacebookTwitterPinterestLinkedinEmail
previous post