I have mentioned this before but in February 2005 I spent a week on vacation…in Staten Island. I rented a room at a B&B at the water’s edge, at the beginning of Hylan Boulevard where it meets the Narrows, just across the road from the Alice Austen House: it was a “residency” as they say in the music biz, as I was staying there to do photography and research for the ForgottenBook. During my time there, I got a number of photos that didn’t make it into the book (which, by the way, originally had enough entries to make about 600 pages — HarperCollins cut it down to 350!) Among them were some of Staten Island’s many dead ends and alleys. Along with its major roads, most of which seem to be named Richmond, Staten Island’s streets go mostly 6-10 blocks, and there are hundreds of streets that go for just a block or so, or are dead ens cul de sacs. I have a few of them here.

Bovanizer Street, on the cusp of Eltingville and Annadale, runs between Amboy Road and Mosely Avenue just east of Arden Avenue, a major artery. It was named for a since-forgotten elixir that changes its subject into a cow. This also made me think of The Abdominizer. or even the Mighty Maximizer, a DJ on the old WLIR-FM in the 1980s.

According to most maps, Ross Lane continues from Amboy Road through to Oakdale Street across from Bovanizer, but the sign warns otherwise. 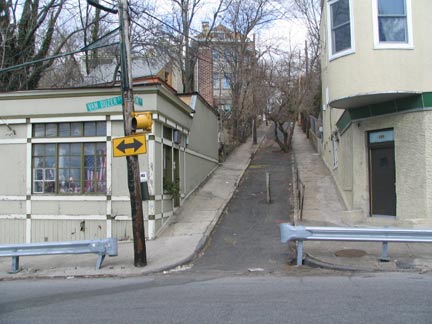 Stone Street runs for one block between St. Pauls Avenue and Van Duzer Street in Stapleton, and it’s so steep and narrow that it’s closed to vehicular traffic. Near St. Paul’s, another lane (below right) angles off it to a dead end. I had long suspected that this was originally a street as well, and a consultation with an 1873 Beers atlas of the area confirms that it was once Willow Street (below left). More views of Stone Street on the St. Paul’s link.

Tonking Road is one of a number of dead end roads trailing from Rockland Avenue northeast into park paths of High Rock Park, a nature preserve and conservation center in Egbertville (a small hamlet near Richmondtown). I have seen this spelled on some maps as Ton King, though that might be an error.