Hallelujah, I’m a bum. In March 2011 my former company had a ‘reorganization’ in which the dead wood is carted out and burned. No matter how much they spin it for you, this is their way of saying that you are unnecessary to the operation and no longer desired. I favor a much more drawn-out process in the laying off of hands — I want the documents shown to me that my labor is not required in the operation of the Company and is a drag on the Company’s resources, and I want lawyers present when these dismissals occur.

Just a few weeks earlier, I was blithely shambling through Cobble Hill, a neighborhood I had no business being in then and now, as I was soiling the gentrified area with my graying, despoiling presence. But I am ashamed of myself no matter where I go, and so I stumbled on, ready to challenge anyone who questioned my presence here.

I was unsteadily swaying down Warren Street. The progenitor of the street name seems to be unknown, as the maddeningly incomplete Brooklyn By Name by Benardo/Weiss is silent on it. I went past a magnificent edifice at 205 that bore some scrutiny and research.

The date of construction, 1882, is handily carven at the roofline, as architects of the time were wont to indicate the date of construction. This is the former St. Paul’s parish school and must be remarkably unchanged in its 13th decade. In 2007, Brownstoner vouchsafed a peek inside to the winners of life’s lottery who could afford the nearly $1M tab for a former classroom, now an apartment. The former school served the parish of St. Paul, now combined with the parish of St. Agnes in Cobble Hill.

An imposing building indeed at 380 Henry at Warren, now theCobble Hill Health Center but originally St. Peter’s Hospital. Consulting my Francis Morrone, I see that it was once associated with St. Peter’s/St. Agnes, and therefore with the school seen earlier on this page. It was constructed in 1888-1889, what must be the two greatest years in NYC architecture, by William Schickel & Company. The hospital closed in 1962, became a nursing home and was then subjected to the usual scandals that nursing homes undergo, as the elderly are considered nuisances in our society. The building was renovated in 1989 and attained its present use at that time. 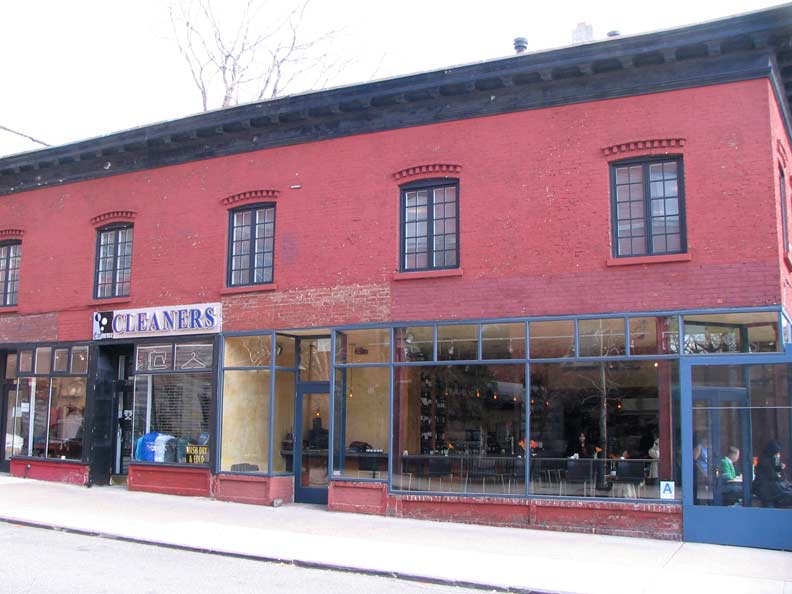 I have photographed the SE corner of Warren and Henry before. I am fascinated with this 2-story low slung brick building, with its curved lintels and casement windows, it makes for a classic NYC Edward Hopper-ish scene. The  restaurant on the ground floor follows the recent trend of not showing its name in the window — that’s so only the hepcats will know what it is. It is actually the Bocca Lupo restaurant, which refers to the Italian phrase “in bocca al lupo,” or “in the mouth of the wolf” — the same as saying “break a leg” in English, or simply, “good luck.”

The section of Warren Street between Henry and the BQE at Hicks is dominated by the works of architect Alfred Tredway White, who from 1876 to 1879 constructed what were then affordable homes for working men and their families in what by today’s standards are magnificent brick buildings along Warren and Hicks and in the private way, Warren Place (right), between Warren and Baltic Streets. While the Place originally housed the lower to middle classes, the small attached houses there now routinely sell for more than $1M, even in the housing downturn that started in 2008 and was still in effect in 2011.

The Cobble Hill Towers complex (left) and attached White homes on Henry Street (right). They were originally called the Tower buildings and Home buildings. These were houses with excellent ventilation and a toilet per unit, which was a pioneering concept in 1876. At the time, tenements were dark, dank and dirty places to live, and White wanted to open the blinds and let the sunshine in. Many units opened onto balconies, as in the Tower buildings.

The 2-5 room apartments in the White buildings were originally rented for $7.20-$14 per month, and that’d still be only up to about $250 today. It’s inconceivable for such stylish appointments being built for workers in 2011.