Helping fulfill a recent self-promise to tour around in places such as upper Manhattan, Bronx and Staten Island locales that have so far gotten something of the short end of the stick, FNY-wise, I was in Inwood in upper Manhattan checking out its collection of one-block streets. True, I had already covered little known Manhattan streets such as Cumming, Beak, Staff and Henshaw on a previous Inwood page, but there had been some that I missed, and eventually my hope is to chronicle very one of NYC’s streets that travel a block or less, perhaps restricting myself to named, as opposed to numbered, streets, saving myself a lot of toil in Queens. I took the #1 IRT 7th Avenue subway all the way to 191st, a particularly deep subway stop that features a long, forbidding tunnel taking subway passengers under a hill…

I exited at the St. Nicholas Avenue 191st Street exit. The station dates to 1911 (lots of 1’s and 9’s involved here, and the #9 train was once a skip stop version of the #1). The station was once the site of an NYU experiment in capturing cosmic rays — its great depth allows only the strongest rays to enter. The station recently enjoyed a renovation that included the installation of a mosaic mural by artist Raul Colon called Primavera. I was attracted to the pair of lamps at the entrance that look pretty aged. They hold green globes that indicate the entrance is open 24/7.

WAYFARING: The Lanes of Inwood

Uptown Manhattan is quite hilly, or rather, much of Manhattan was until large parts of it were leveled and straightened in the mid-1800s when the street grid was being constructed. There are noticeable hills remaining in the Lexington Avenue area in the East 100s, and the Murray Hill areas, but those are rather gentle compared to the rather abrupt and steep ones found in this part of town in the Fort Tryon Park area. Turn a corner, and you might see giant rock outcroppings, or very oddly shaped buildings like these on Fairview Avenue at its intersection with Wadsworth Terrace and Broadway terrace. Wadsworth Terrace is named for Civil War general, killed in battle, James S. Wadsworth (1807-1864); Fort Wadsworth in Staten Island also bears his moniker.

There is a Broadway in all five boroughs (Manhattan’s and Bronx’ are the same street), and there are six streets in Manhattan with Broadway in the name: Broadway itself; Old Broadway, a piece of old Bloomingdale Road north of West 125th Street; East and West Broadway; Broadway Alley in Murray Hill (why a street so far from Broadway is called that is unknown) and Broadway Terrace, which is literally a terrace east of Broadway: if the buildings weren’t in the way, that would be somewhat clearer.

Most of the Broadway Terrace apartments on both sides apparently were built by the same developer and architect. They’re handsome but no-nonsense light brick buildings.

I detoured along Broadway but not for too long. Both Hillside and Nagle Avenues begin here; Hillside runs along a steep scarp and faces the hill of Fort Tryon Park. Nagle Avenue, named for 17th Century Dutch settler Jan Nagel, later accepts the IRT 7th Avenue when it becomes an elevated.

The Bogardus family, Dutch immigrants, owned land in the area in the colonial era, and family scion James Bogardus (1800-1874) is credited with building the first cast-iron front buildings in Manhattan, most of which are found in the Tribeca and SoHo areas downtown.

Other than the parks, it has to be admitted that this part of town has something of a uniform and drab appearance. Block after block of apartment buildings dominate the scene, except for Fort Tryon Park and north of that, the natural oasis of Inwood Hill Park. In the main, far northern Manhattan was built up in the early years of the 20th Century (the streets were laid out late in the 19th, and it took time for the population to move north. Things were moved along considerably after 1911, when the IRT subway came to town.

Tale of two schools: I found it unusual to have two public schools so close together, PS 178 on Bogardus and Ellwood, and PS 152, Ellwood and Nagle. P.S. 178 is the newer of the two; PS 152 calls itself the Dyckman Valley School, a neighborhood term I’m unfamiliar with.

Given the lesser amount of real estate, some streets carrying numbers are one-block streets as well. West 196th runs for one crooked block between Broadway and Ellwood Street (West 192nd and 193rd also). Numbered streets are the garnish here, not the main meal, as most streets are named, though most numbers are represented; there is a break between West 196th and 201st, and 201st, 203rd, 205th, 206th, 208th run for a block or two near the Harlem River, and West 212th-214th, 219th and 220th are all one block streets.

There’s an odd occurrence vis a vis Manhattan and Bronx numbered streets here: while Bronx streets are treated as eastern extensions of Manhattan streets, the Bronx street numbers lag behind Manhattan’s, as Inwood numbers are a good 20 blocks ahead of the Bronx University Heights streets just to the east across the Harlem River. In Kingsbridge Heights, near the Manhattan border, the numbers catch up: Bailey Avenue meets West 193rd, then Kingsbridge Road, then West 229th.

A series of murals, most now faded, were done by IS 218 students at some time in the past on a public walkway between West 196th and Nagle Avenue. I would like to know the story behind these, some of which imitate classic paintings and scenes from the past. I see a Matisse here, a Michelangelo there.

Packard auto showroom, Broadway and Sherman Avenue. It was designed in 1926 by architect Albert Kahn, who designed Packard showrooms across the country and, although he is now little-known, was in his day one of the highest compensated architects. Fittingly enough, it now serves as a parking garage. Packard, famed for luxury autos, was in business from 1899-1958.

Dongan Place runs for one block between Broadway and Arden Street north of Sherman Avenue, featuring some rather dour architecture, but a sprightly mural at Broadway. It is named for Thomas Dongan (1634-1715), an Irish Parliamentarian and then British colonial governor of New York from 1684-1688. He lived on an estate in Staten Island, where Dongan Hills is named for him. As governor he established the New York city charter, the ward system and what later became the City Council, and divided NY State into counties.

Our Lady Queen of Martyrs School, Dongan Place and Arden Street. (Catholic nomenclature is occasionally alarming if you’re not familiar with it, with its Most Precious Bloods and Sacred Hearts and such.) Arden Street was named for Revolutionary-era patriot Jacob Arden, a butcher by trade. Further downtown, Asser Levy Place is named for the first Jewish kosher butcher in the colony of New Amsterdam. 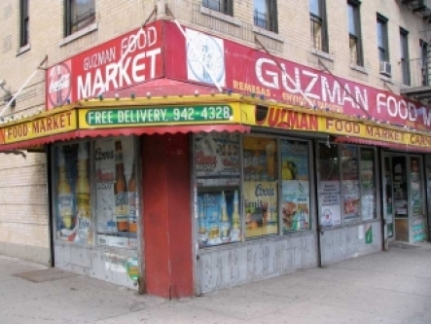 To find the next short lane on my list I cut through Fort Tryon Park exiting at Margaret Corbin Drive and Cabrini Boulevard, to find Alex Rose Place (West 186th) at the edge of Castle Village Houses (above right) constructed in 1938 by brothers Charles and Joseph Paterno in place of the former Paterno Castle. At the edge of a cliff overlooking the Hudson River at Alex Rose Place and Chittenden Avenue is the Pumpkin House (the arrangement of its windows appears anthropomorphic when seen from the Henry Hudson Parkway or the river. As of March 2011, the place was for sale.

Alex Rose (1898-1976) was a founder of the Liberal Party, which remains an important line on the ballot to capture for NYC political aspirants. mayor Ed Koch signed a bill to name West 186th for him in 1983.

Chittenden Avenue, with its great Hudson River view, today runs only from Alex Rose Place (West 186th) to West 187th, but older maps had it extending from Cabrini Boulevard to a ramp on to Riverside Drive. Merchant Lucius Chittenden arrived in NYC from New Orleans in 1846 and built a residence here; the Avenue was named in 1911. 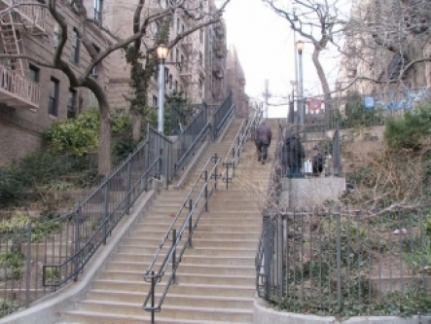 Finally, Pinehurst Avenue between West 181st and 183rd becomes one of upper Manhattan’s many step streets, as the grade was too steep to open traffic through.