Though most of western Queens can be considered Long Island City (it was once an independent entity) there are subdivisions such as Ravenswood, which faces across the East River across Roosevelt Island to the Upper East Side; Queensbridge, just north and south of the Queensboro Bridge; Hunters Point, the small bit surrounding the mouth of the Queens Midtown Tunnel; and Dutch Kills, named for the Newtown Creek inlet, concentrated near Queens Plaza and the west end of the massive Sunnyside railroad yards servicing Long Island Rail Road and Amtrak trains. In 2011 Dutch Kills was beginning to transition from mainly industrial to upscale residential, and several of its older treasures such as the old Long Island Star offices, where the long-lived newspaper was produced, have fallen to the wreckers.

Views from 27th Street near 42nd Road, where much of Dutch Kills’ old low-rise character can still be found with a mix of 2 and 3 story houses and offices for local businesses. The Queensboro Plaza el station, servicing both the BMT Astoria line and IRT Flushing Line, can be seen in the distance.

Dutch Kills is a mix of new-school soaring glass towers and the modest businesses, including service garages, that have been a staple there for decades. The elevated ramp carries traffic from the Queensboro Bridge to Thomson Avenue, which becomes Queens Boulevard at Van Dam Street.

Even on the most obscure side street you can find gems like the building on the left, with the arched windows and door. How long will it last in the New Dutch Kills? 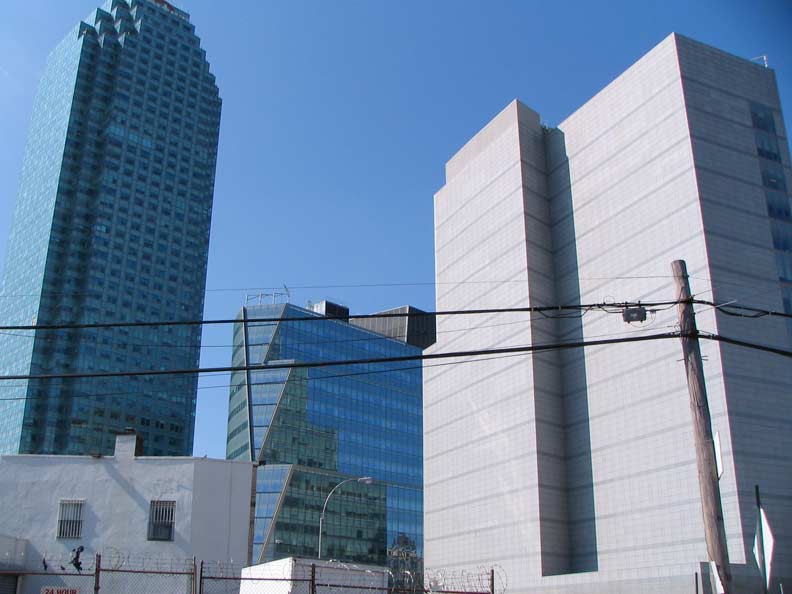 On 43rd Avenue between 27th and Crescent Streets, some of the old Dutch Kills is ready for the last roundup, while the new glass towers of Court Square look on dispassionately. The tower on the right looks like a prison but it’s not.

Meanwhile on 21st (Van Alst) Street and 49th (Hunters Point) Avenues an apartment building of the 1920s can be compared with a new one from the 2000s.

The M(agasin) Wells diner recently opened in a 1954-built diner (diner aficionados, let me know the manufacturer) at 21st and 49th, specializing in breakfast items but with a rather eccentric menu including whelks (a type of snail) with blood sausage; veal brains; and marrow. They serve Peking duck 3 ways (one of the ways costs $135)! With that menu, I don’t know if I’ll go in much. Bridge and Tunnel Club has some shots of the interior. The breakfast menu has stuff I can enjoy.

In August 2011, M. Wells announced it would be moving out of the diner.

Walking down 49th I spotted an old fashioned vent (this looked like a classic Giraffe vent) that has put in a few decades. Directly east was the bellmouth of a Long Island Rail Road/Amtrak train tunnel to Penn Station, and, if regulations and ownership permitted, to New Jersey and mainland west.

Dutch Kills is one of the great transportation nexuses (nexi?) in the country, as here is an IRT subway entrance on 49th. There are only 3 IRT subway stations in the entire borough of Queens: Vernon-Jackson, Hunters Point (this one) and the terminal at Main Street in Flushing. This one opened in 1914. Right: the LIRR cut made the former Paragon Oil building triangular. Looking west on 49th, the King of All Buildings asserts itself.

The gateway to eastern Long Island: all eastern branches of the LIRR can be accessed here during weekday rush hours, save the Port Washington line. Oddly, in the present track configuration, these tracks do not connect to the Penn Station terminal, but rather run at grade to the Long Island City terminal, which lost much of its importance in 1910 when Penn was opened..