DINER AT THE END OF QUEENS. The Clinton

May 2011: Having been forced out of my job by mechanization and the fanatical desire of business to maximize profits (the cry of business is that “we are not running a charity here” and my answer is, why don’t you?) I had gravitated, as I often do, toward the fetid and miserable waterways of western Queens, one of the few places on Earth where I fit in comfortably. The solitude is balming. Other than the truck traffic and the murmurs (and occasional outbursts) of the few remaining workers, all is quiet, even in midweek middays. Westward we drifted (I was accompanied by the webmaster of the Newtown Pentacle). Closer and closer to the stench-ridden waters we approached. Before long, the expanse of Newtown Creek and ts non-swirling tributaries shewed themselves ….

Seeing the USA, or at least its littlest-known bits, including an ancient pop top from the 1960s or 1970s (those things don’t biodegrade) on 47th Street between Grand Avenue and 58th Road. At 47th and 58th Road is a 1970s-era NYC Sanitation garage. Turning west on 58th Road… 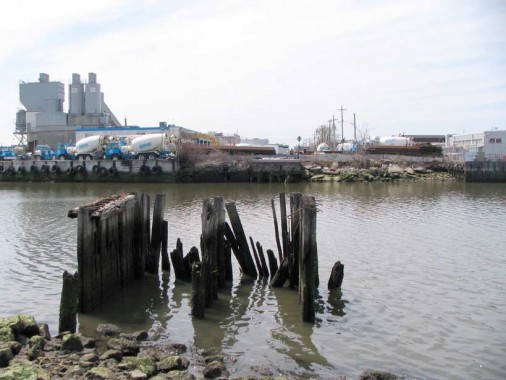 We have met the Creek and it is us. The pilings and pier remnants are reminders that the Maspeth Plank Road, a connector from the City of Williamsburg(h) to Newtown once spanned the creek, but not since … 1875, though the bridge can be found on maps from the early 20th Century. The giant Maspeth gas tanks could once be seen from this vantage, but they were imploded in a controlled explosion in July 2001 — an eerie precursor to events two months later. 58th Road is a remnant of the Maspeth Plank Road, which is represented by Maspeth Avenue (which was redirected about 40 years ago and no longer follows its former plank-paved route here).

This is the southern end of Newtown Creek, which bubbles to an end at Metropolitan Avenue. Seen here on the left we are looking northwest toward the Brooklyn side. Discernible is the Brooklyn Union Gas/Keyspan/National Grid plant, the King of All Buildings, the sooon to be replaced Koszciusko Bridge, and the Queens Citibank tower. Right, looking south, a cement plant on the Brooklyn side, accessible from Maspeth Avenue. 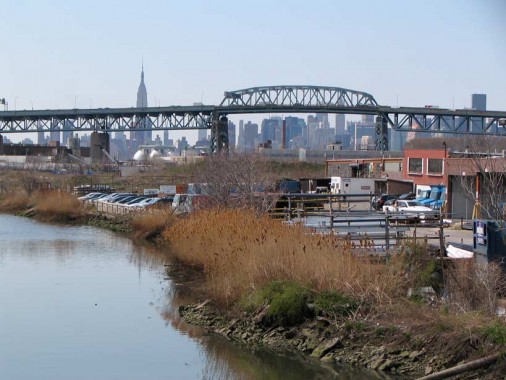 After I foolishly tried to beat the traffic on Metropolitan Avenue, tripped over a curb and sustained a dripping head wound, we pressed north to the edge of Maspeth Creek. Using the telephoto, I zoomed in for this photo of the Kosziusko with a Midtown backdrop. Within 5 years this scene will change dramatically, as anew bridge of a yet to be determined design (NYC will probably settle on the cheapest, therefore ugliest, variety). I root for a cable stay bridge, the best-looking option.

Maspeth Creek is a dead-end tributary, or inlet, of Newtown Creek south of the Long Island Rail Road tracks. If anything, it is even more sludge and slime-ridden than its parent waterway. Even so, local fishermen catch and eat the strange fauna that wriggle deep within. Snapping turtles, which can remain submerged for hours on end, sit at the bottom, and woe betide any three-eyed thing that swims past. Though the Phelps-Dodge copper plant has long since vacated the banks of the creek, its multihued chemical legacy can still be spotted upon a close look. But do not get too close.

Abandoned tracks used to carry freight container cars from the Long Island RR to businesses lining the creek. A plumbing supplier has decorated 49th Street with a number of tree boxes bearing its name. My companion warned me, however, that it would be unwise to photograph the trucking concern across the street.

49th Street crosses the Long Island Rail Road’s Montauk Branch north of the creek. The tracks are still well-maintained for freight traffic, and three passenger trains use these tracks weekdays. On the right is the former Haberman station, in use from 1910-1997. When the LIRR upgraded its rolling stock that year, the agency did not wish to build the necessary high platforms here to accommodate the approximately 5 daily passengers that used the station. By 1997 the station was a space along the unelectrified tracks, its sign long since stolen (I have reproduced one here.) 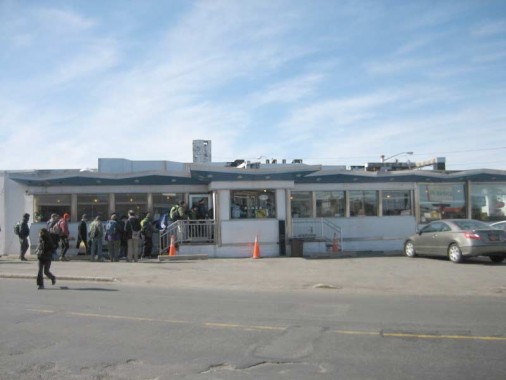 The nearby Clinton Diner can be found in the triangle formed by Maspeth Avenue, Rust Street, and 57th Place, across from the former site of St. Saviour’s Church (the 1847 edifice was disassembled in 2007 and awaits reassembly…. somewhere, as its property will either be a mixed-use development or a public park. The diner itself was first built in 1935 (its namesake, the DeWitt Clinton mansion, home of the early 19th Century New York statesman, burned down in 1933). The diner was renovated in 1965 and is essentially unchanged since that year, inside and out.

It’s not every day you walk into a diner and find your website on the menu. But that’s exactly what happened at the Clinton Diner, as it has an extensive history that includes dozens of movie shoots, with major Hollywood stars who have passed through; perhaps the best known as Martin Scorsese’s Goodfellas. It also memorializes a Forgotten NY tour that passed by a few years ago. The diner’s location on a main truck route, its isolation, and its 1960s decor make it irresistible to directors searching for period atmosphere. The latest film shot at the Clinton was You Don’t Know Jack, an autobiography of Dr. Jack Kevorkian, the controversial euthanaisist, played by Al Pacino. Exterior shots of the Clinton Diner by Will Yakowicz

Halfway through lunch, my head wound opened up again, and so we cut the meal short and called the EMT’s to take me over to Elmhurst Hospital. Five hours waiting next to a crazy lady who had taken too many meds and two staples and a couple thousand dollars later, and I was well enough to head home. But the miasmic waterways of western Queens will beckon again.