In July 2011 I crawled through the postmodern wasteland of modern Flushing, a land increasingly scattered with empty lots testimony to the golden dreams of the go-go 2000s and a mayoral initiative of 9 million New Yorkers by 2011, and signs peppered with broken English that you are not sure were written by recent high school/college graduates or the developers of these weed and concrete strewn tracts. Above: 162nd near Sanford.

House on the edge of an unjustified teardown, Sanford and 157th 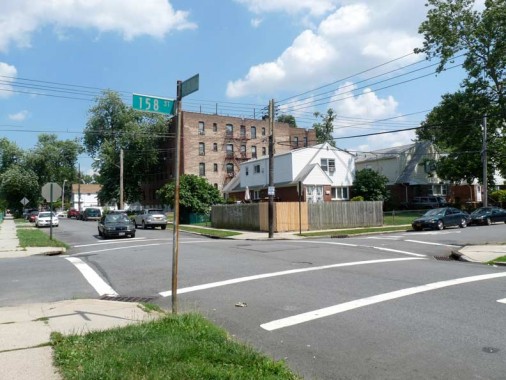 When a tornado attacked Flushing in September 2010, it cut the telephone pole on the corner of 158th and 43rd Avenue in half, eliminating the lamp mounted on it. The city repaired the pole, but never replaced the lamp, making this one of the only unlit intersections in NYC.

“We buy house, then demolish house.”

One more concrete lawn for the road.

I spit on the Flushing developers.

THE WALKING MEN: Cross signals from around the world