On September 17, 2011, over 40 ForgottenFans met at 2nd Avenue and East 125th Street to celebrate the 75th anniversary of the Robert F. Kennedy Triborough Bridge (which opened to traffic on  July 11, 1936) by walking nearly all of its pedestrian span, from Harlem to Wards and Randalls Islands and thence to Astoria, Queens. Sunshine was at a premium, as with most FNY tours, but it turned out to be one of the most successful tours of the season. Tourgoers saw or glimpsed 10 separate over-water bridges on the tour: The Triborough’s three spans; the Willis Avenue, Third Avenue, and Metro-North railroad bridges; the George Washington bridge on the horizon; two spans of the Hell Gate railroad bridge; and the Little Hell Gate Bridge, a pedestrian bridge crossing the waterway of the same name between Wards and Randalls Island.

Though a Harlem and East Rivers span from northern Manhattan to Queens had been talked about since the Queensborough (Ed Koch) Bridge had opened in 1909, it took enormous political will and engineering expertise to connect the Bronx, Queens, Manhattan and Randalls Island, and though ground for the bridge was broken in 1929, substantial work didn’t commence until 1934, with the complete bridge opening two years later. The complete story of the Triborough Bridge can be found in Sharon Reier’s excellent book, The Bridges of New York (Dover, 1977). 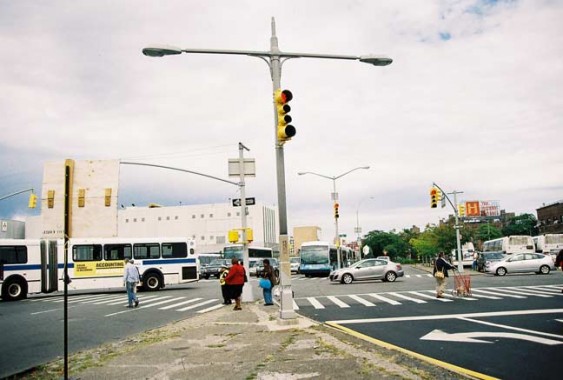 Before crossing on the pedestrian ramp on the north side of the bridge, we took note of a flock of vintage 1936 Triborough Bridge lampposts at 2nd Avenue and 125th Street that were installed when the bridge opened. New versions of these posts have recently apperaed in the Hudson River Park as well as Broadway and Ditmars Boulevard in Astoria, but these are the originals. The finials, with their stepped design, match the stepped spires of the main span bridge from Wards Island to Astoria. Each honor the ziggurat style of architecture prevalent in the 1930s. Of course these lamps have supported  a variety of light fixtures over the decades. 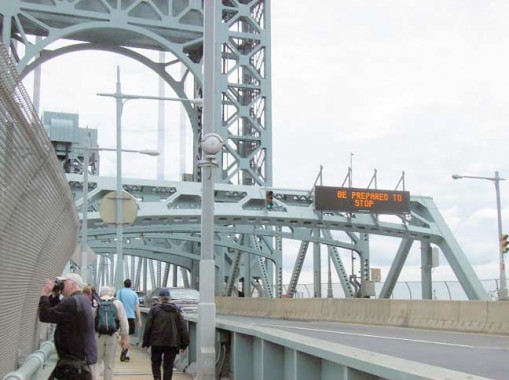 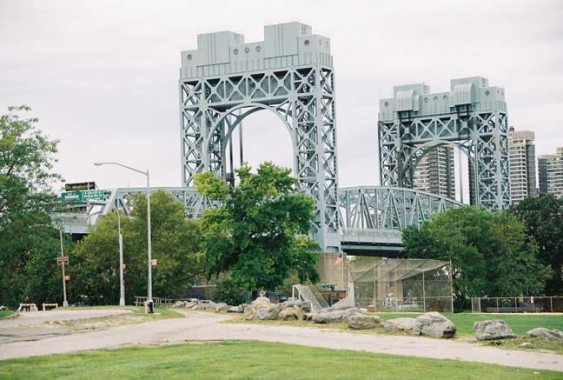 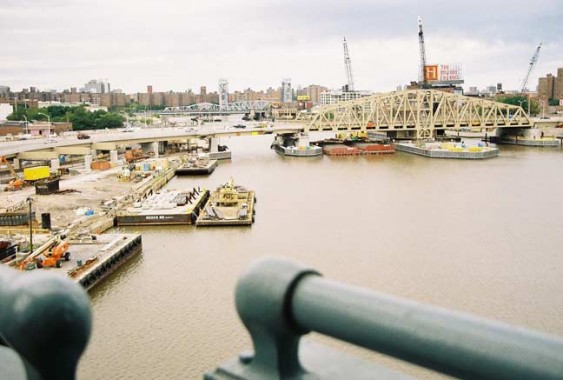 From the Harlem River span, three bridges can be glimpsed: the new Willis Avenue Bridge; the 3rd Avenue Bridge; and the Metro North railroad bridge, also a lift span. The Willis and 3rd Avenue bridges are swing bridges, which are moved to the side to allow river traffic to pass. 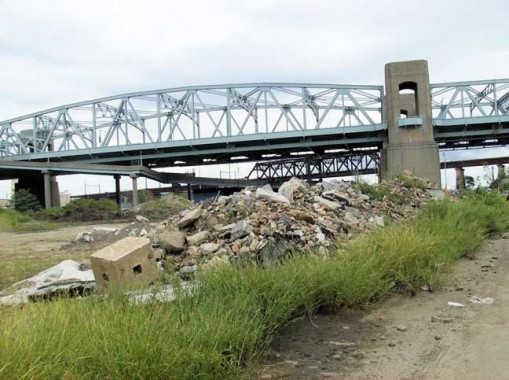 Upon attaining Randall’s Island, named for settler Jonathan Randel, who purchased it in 1784 and sold by his heirs to the city in 1835, we saw the Bronx Kill span of the Triborough, perhaps the least publicized of the Triborough’s three spans. It bridges a short strait called Bronx Kill that connects the Harlem and East Rivers between Randall’s Island and the Bronx mainland. 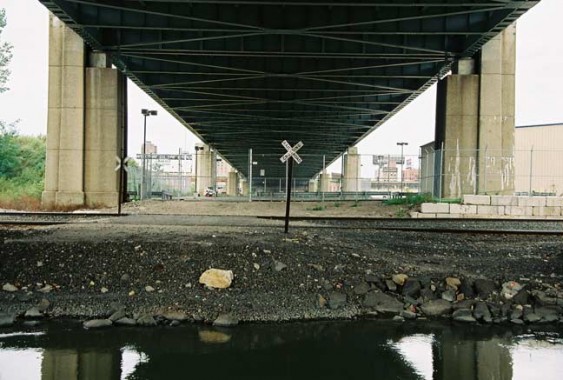 We are standing beneath the Triboro Bronx Kill span, looking across the waterway at tracks leading to the Harlem River Intermodal Railyard, accessed by a ramp in Port Morris accessible to trains crossing via the Hell Gate Bridge. The Oak Point Yards are about a mile to the northeast. 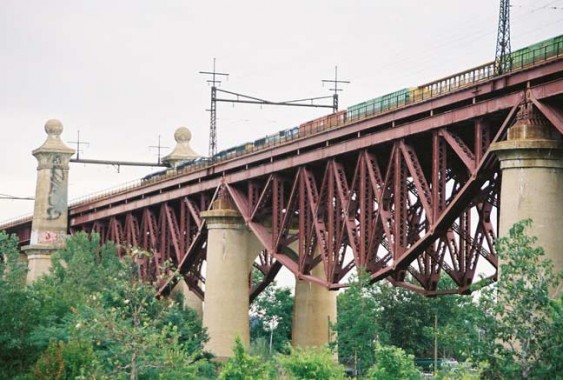 It can be argued that the massive Hell Gate Bridge, which itself consists of two large spans and massive viaducts and approach ramps was the ‘original’ Triborough Bridge, as it, too, touches three boroughs, connecting Astoria, Queens and Port Morris, Bronx, via Wards and Randalls Islands. It serves both rail and passenger traffic. Freight tracks attain it in Queens from both Sunnyside Yards and the NY Connecting Railroad and Fresh Pond Yards; in the Bronx, it allows trains to run to northern NY State and New England. 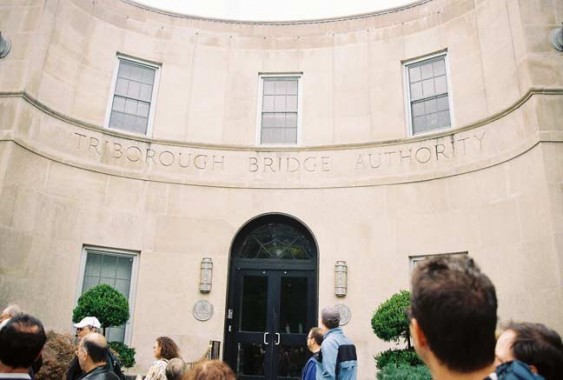 The Art Deco Tribrough Bridge Authority Building, opened in 1936, was for many years the headquarters of NYC traffic czar Robert Moses. Ironically, Moses did not drive and had to be chauffered to the building from Manhattan every day. 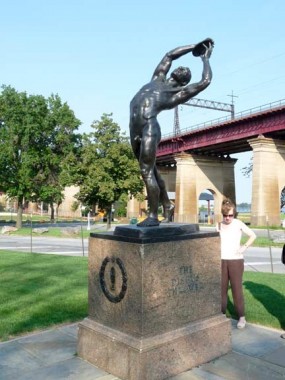 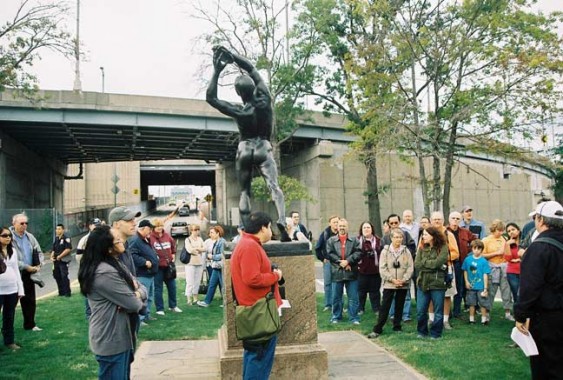 The symbol of Randall’s Island is The Discus Thrower statue (1926) which stood on the Downing Stadium plaza from 1936 until the 1970s. The bronze by Greek sculptor Kostas Dimitriadis, donated to the City of New York by Ery W. Kehaya, was returned to Randall’s Island in July 1999. The statue was restored with major funding from RISF Board Member Michael Bloomberg and friends of RISF. wikipedia 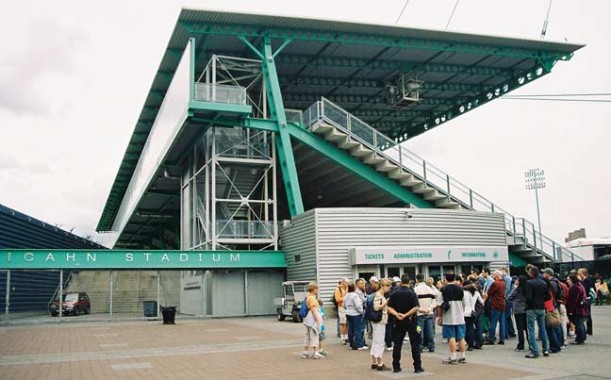 Icahn Stadium, opened April 23, 2005, offers an extremely fast 400-meter Mondo Super X Performance running track, flanked by covered spectator seating for 5,000 and features modern locker rooms, showers as well as fitness, exercise and meeting rooms. In addition, a premier FIFA certified soccer field to the north of the Stadium has been built with an artificial surface, fencing, lighting and bleachers. Icahn Stadium opened on April 23, 2005 and is named after American businessman Carl Icahn.

Downing Stadium, which it replaced, was constructed soon after the Triborough was opened; over the years, it hosted the 1936 Olympic trials (Jesse Owens won the 100-yard dash); thousands of other track and field events; was home to the New York Cosmos, who featured superstars Pele, Goergio Chinaglia and Franz Beckenbauer; and hosted major concerts from George Gershwin to Duke Ellington to Jimi Hendrix to Pearl Jam. The day of the tour, Dave Matthews was headlining a 3-day festival on the island.

Quite a turnaround from the original uses of Wards and Randalls Islands, which in the pre-Mosesian era were used to stash “undesirables” from the insane to the virulently ill to the criminal element. 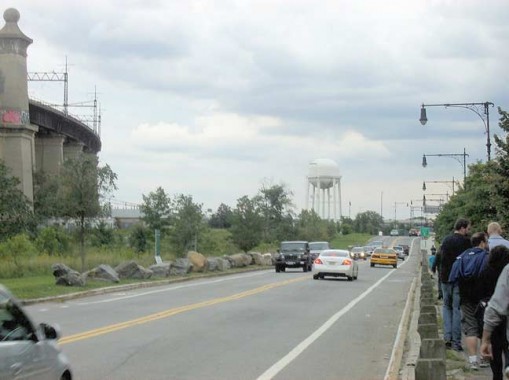 Are we in Manhattan? Technically, yes,on Central Drive, which runs north-south on Wards and Randalls Island. The drive has in recent years been newly landscaped and repaved. 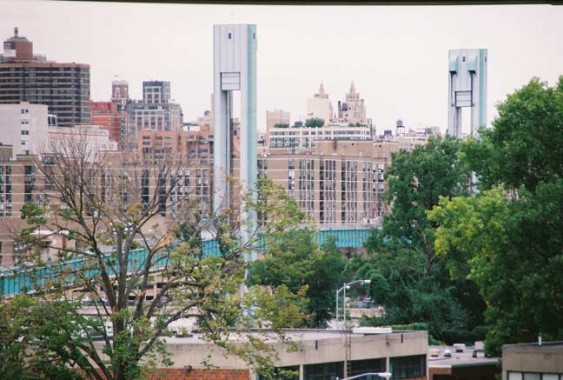 The Wards Island Pedestrian Bridge is open from spring to fall and connects the island with East 103rd Street and the FDR Drive in Harlem. It was constructed in 1951. It can lift 135 feet above the Harlem River. 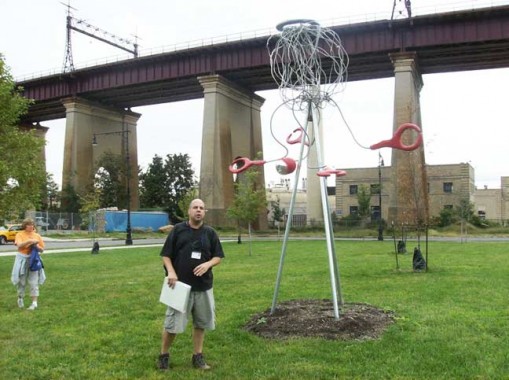 The main suspension span of the Triborough Bridge comes into view. The main span is 1380 feet (421m); it is the longest of the Triborough’s three spans, and the total length including approaches is 2780 feet (847m). Unlike the other two spans, it contains just one narrow sidewalk, on the north side. The towers are 315 feet (96m) in height. The architect, Othmar Ammann of Switzerland, built most of the City’s great bridges of the 20th Century: The George Washington; Triborough; Bronx-Whitestone; Throgs Neck; and Verrazano-Narrows.

According to legend, a sign on the bridge once read, “In event of attack, drive off bridge.” Since the bridge roadway is the equivalent of 15 stories from the river,  that advice would have meant certain death. From Wards Island, pedestrians and bicyclists enter a lengthy “tunnel” along the approach path to the bridge sidewalk. 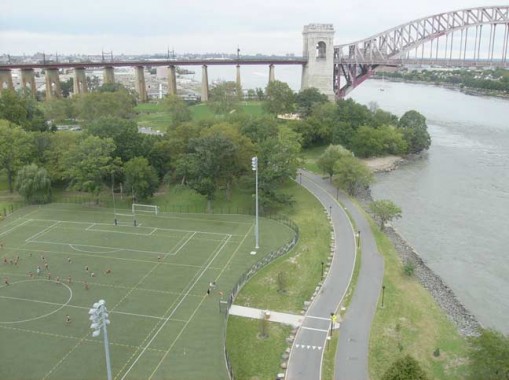 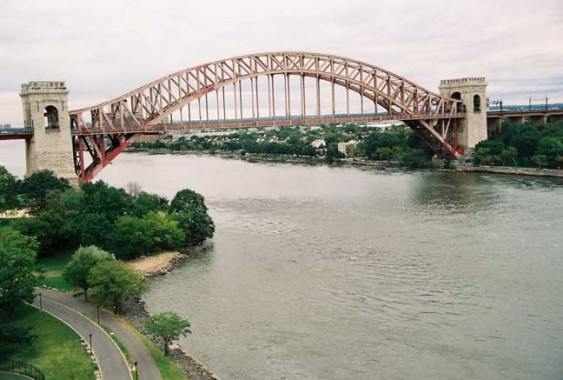 The Hell Gate main arch span was completed in 1917 and has always been a railroad-only bridge. It was built soon after the construction of Penn Station, and permits passage to coastline communities along the East Coast as far north as Boston, MA. The bridge’s sheer scope consists of this arch bridge, a truss bridge over the Bronx Kill, and massive approaches on Randalls Island and Astoria. The architect was Gustav Lindenthal. Robert Moses’ name is also associated with Astoria Pool, one of the 11 massive public swimming pools built in NYC in the 1930s in the teeth of the Depression. Astoria Pool is the largest and perhaps grandest of them all.

At 330 feet in length, the main pool is the largest in New York City. Parks Commissioner Robert Moses, an avid swimmer himself, recognized the importance of aquatic recreation and launched a campaign to open eleven new pools throughout the city during the summer of 1936. The labor and construction came from the Works Progress Administration (WPA), whose administrator Harry Hopkins described the pool in Queens as, “The finest in the world.” Astoria Pool was a model for the other ten pools. It has been said that Moses intended it to be the grandest of the new pools because it had the best view of the Triborough Bridge, which was completed in the same year. We’ve come a long way. The entire walk from Harlem to Astoria cross two of the Triborough’s three spans is about three miles.

In case you did not know the Bronx Kill span was supposed to be a swing bridge but that never happened. The TRUSS Span could have been made into a “Lift” span but that never happened and once the landfill was in place, it was history. The section of steel eyebars that was between randalls and Wards Island is called an “Inverted Bowstring Truss. Lindenthal prefered Eyebars on his bridges unlike Othmar Ammann who preferred parallel wire cables. The Wards Island Lift Bridge was designed by Othmar Ammann who designed the great GWB.

I remember some fifty years ago spending entire day at Astoria pool and laying out on the concrete soaking up the sun and wishing I had another nickel to buy some candy.

I was born in Astoria in 1941 and liver there until 1964. I’ve walked the Bridge an played ball in the park. I think that your photos and text are really great. Because they present the entirety of the bridge roadway complex and interesting background information.

May I expand upon the Hell Gate Bridge’s history and main functions. It is four tracks wide and was built as part of the overall Penn Station project, designed to provide an all-rail passenger train route between points south of New York City and New England, via Penn Station. Prior to its opening, ferries had to carry this traffic across the water between New Jersey and New York. The Hell Gate, and its approaches in Queens and The Bronx, were originally known as the New York Connecting Railroad, a paper corporation that operated no trains but was created by the two railroads, the Pennsylvania (PRR) and New York, New Haven, and Hartford (NH), which originally ran trains on this route. Today Amtrak provides an all-electric train uninterrupted train service between Washington and Boston (the Northeast Corridor), using two of the Hell Gate tracks. The PRR and NH became part of the ill-fated Penn Central in 1968/69; Amtrak formally took over the ownership of the Northeast Corridor service in 1976.

For freight trains, the Hell Gate provides two key links, using a separate third track that is not electrified. The most significant link is between Long Island (all four counties, including Brooklyn and Queens) and locations to the west and south, which must cross the Hell Gate Bridge. CSX Corporation and Norfolk Southern (NS) trains use the bridge. A freight yard in Middle Village (Queens) known as Fresh Pond, is where Hell Gate freight trains interchange with the New York and Atlantic RR, which provides local Long Island freight service. To reach the rest of the freight world, CSX and NS trains must cross the Hudson at Albany, NY, creating a circuitous route for New York freight. That’s why some politicians have asked for funds to build a rail freight tunnel between New Jersey and Brooklyn. The second Hell Gate freight route involves traffic between New England and New Jersey and points south, which requires freight cars to be barged between Brooklyn and Jersey City. New England freight bound to/from Long Island also interchanges at Fresh Pond.

There was once a fourth Hell Gate track, also for freight, but it was removed in the 1970s as that traffic declined.