9/4/11. I do eat seafood. Thing is, though, I anti-seafood-ize it as much as possible. The more it’s sheathed in bread crumbs, butter, lemon, tartar sauce the better, to remove as much as the fish-iness as possible. I’m a big fish and chips guy. Needless to say, I’ve never quite grasped the appeal of sushi. I popped one in my mouth a few years ago, and it tasted and smelled, like, raw fish. Into the nearest napkin, and napkin into the nearest wastebasket.

Which brings me to the magnificent Child’s ruin on the boardwalk and West 22nd Street in Coney Island. Child’s was the first chain restaurant, or restaurant franchise, in America, in business from 1889 to the mid-1960s. The chain wasn’t especially renowned for seafood — indeed, one of the two Child brothers went on a health binge and unsuccessfully tried to make Child’s a vegetarian restaurant in the late 1920s — but its many locations around town are still discernible by two entwined seahorses on their facades.

And then there’s that magnificent Spanish Colonial pile on the boardwalk. It was built in 1923 and was a Child’s until 1947, when it was sold to a chocolatier and actually spent more time as a candy factory (1947-2003) than it had as a restaurant. It’s been an empty, albeit landmarked, shell since, except for a couple of years when Coney boardwalk entrepreneur Lola Star (or Lola Staar, depending on mood, apparently) made it into a roller skating rink. The restaurant did save much of the boardwalk in 1932 when its fireproof construction acted as a firebreak.

Every time I walk past the Child’s, I see something new. But this time, aided by an 18X zoom lens, I was able to get up close and personal with the magnificent terra cotta ornamentation. Just about every square inch of the facade is squirming with sea life.

I had not noticed the richness of detail on the urns and decoration on the facades. [click on thumbnails for descriptions] 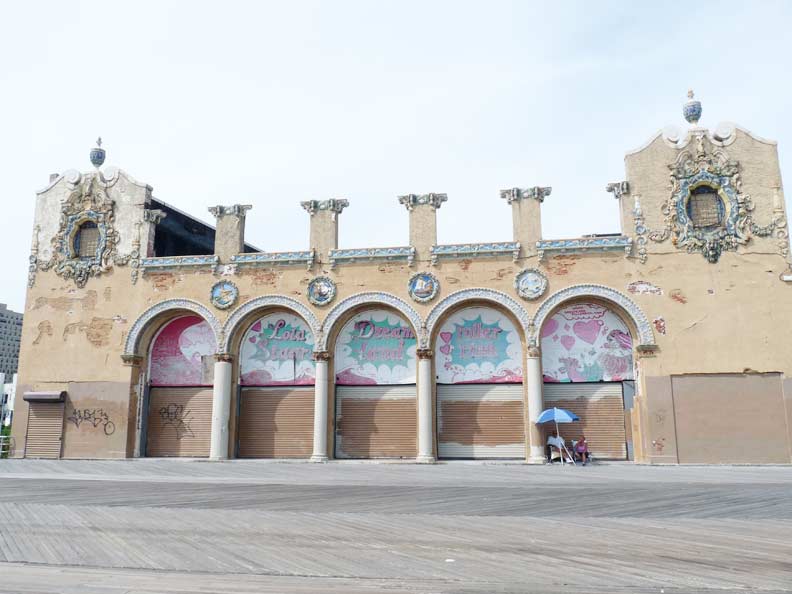 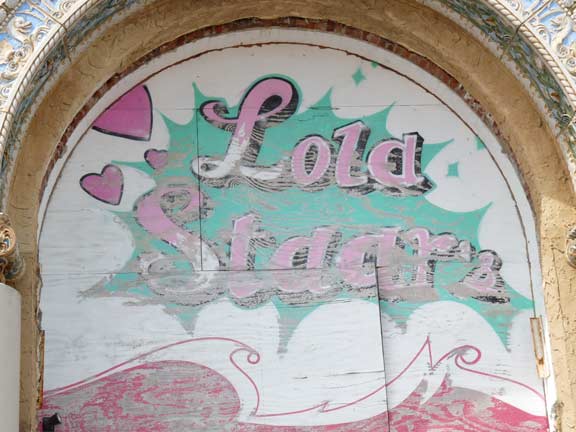 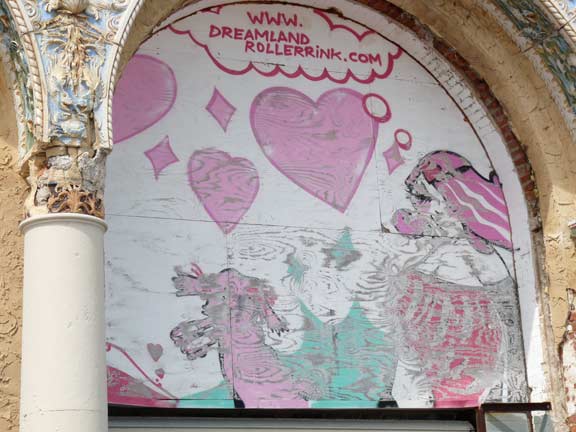 Our first Dreamland Roller Rink manifestation was located in the beautiful Childs Building on the Coney Island boardwalk!  The magical rink opened with a gigantic disco-bang!  Our star studded opening party was hosted by Glamour Magazine and Tommy Hilfiger and attend by sparking stars like Marissa Tomei and Ashanti!  Check out photos of this event!  And, watch the film, Glamour magazine made about Dreamland Roller Rink and photos of the star studded red carpet Dreamland Movie Premier!

Dreamland Roller Rink filled the Childs Building with hot pink roller skating magic until 2010 when the owners of the building decided they would prefer to leave their building vacant for now!  We are very grateful for the time we were able to inhabit this incredible terracotta building with gigantic arches which opened to the Coney Island beach and boardwalk!  We had some incredible disco fabulous days of skating and dazzling theme party music filled nights!  Check out photos of some of our incredible events!

4 terra cotta medallions appear above the arched doorways. These are repeated on the east side of the building on West 21st Street. [click on thumbnails for descriptions]

Four “towers” above each column of the doorways feature sea robins, scallops, crabs and what look like lobsters. A strip of terra cotta was installed between each tower and you will find a snail on both ends of each.

More detail from the terra cotta work. [click on thumbnails for descriptions]

Some more detail on the exterior terra cotta, and a surviving side window. It retains themes from the front, but with the addition of tridents.

Plenty has been written about Child’s in recent years. These two articles are the most informative:

The roller rink signage looks very old, even though it’s just from a couple of years ago. Can’t imagine why the owner would rather leave the building vacant.

If I were to buy it, I would turn it into a music venue where young bands play for free (to be seen and heard) and it would give teenagers (13 and up) a place to go and have fun. The place would be cleaned by volunteerism. Teens would sign up and get in free for cleaning or manning any food or drink venues or setting up or breaking things down. Food would be simple and no alcoholic drinks. I know….a fantasy.

Build it and they will come. Who do you know with the buckage to make this dream a reality?

Hmm it appears like your web site ate my initial comment (it was super long) so I guess I’ll just sum it up what I had written and say, I’m thoroughly enjoying your weblog. I as well am an aspiring blog blogger but I’m still new to everything. Do you might have any points for novice weblog writers? I’d undoubtedly appreciate it.

In my neighborhood of Crown Heights, Brooklyn, there are two former Child’s locations. Oned on Nostrand near Park Place. The other is on Utica, near President.

I walked by this building many times before 2003 and I did not realize there was a candy factory inside. I just assumed the building was long deserted.

I believe there was another Child’s on Kings Highway at one time…..I was told that they pulled out of Brooklyn altogether in the late 40’s……

Yay, Kevin! great blog, you’ll be hearing more from me! love it.

isnt this the building where “2 Weeks Notice
was filmed with Sandra Bullock and Hugh Grant?

Regarding the first of the four terra cotta pieces, a tornado over water is called a waterspout. I also see a lobster, univalves, and bivalves among the fish and tentacles (cephalopods.)

The first time I came across Child’s I was hypnotized by the nautical themes. I grew up in Dominican republic on the shores of the Caribbean sea as a water man and these nautical figures enchanted me to the point that I’ll spend hours on end just gazing, admiring, and reminiscing of days of yore. Whomever the artist was who made this figures deserves to be mentioned; these figures emanate a sense of beach enjoyment and of a happy moment at the beach front. It does not cease to amaze me how the nautical themes at Coney island ooze a sense of beach culture not found anywhere else. Thank you all and stay well.

This building always reminded me of the Lundy’s Restaurant Building on Emmons Ave in
Sheepshead Bay… Perhaps the same architect and builder?
Anyone who is familiar with Lundy’s will recall a strong resemblance…

You did a great job with these photos….It’s August 2017 and many of this original ornaments have recently (sadly) been removed and replaced with reproductions…(A new restaurant opened here…)…
See This: http://www.coneyislandhistory.org/blog/history/new-exhibit-terra-cotta-relics-childs-building#comment-4549