BY SERGEY KADINSKY and KEVIN WALSH

Collect Pond Park, a public space between Lafayette and Centre Streets and north of Leonard, has been called one of the worst public spaces in downtown New York, with a smattering of benches and trees surrounding broken concrete. It lies atop one of New York’s foremost sources of fresh water prior to the American revolution, a spot known as Collect Pond (a British transliteration from the Dutch Kalck Hoek, or Chalk Hook). Reconstruction of the park aims to restore an enclosed pond. 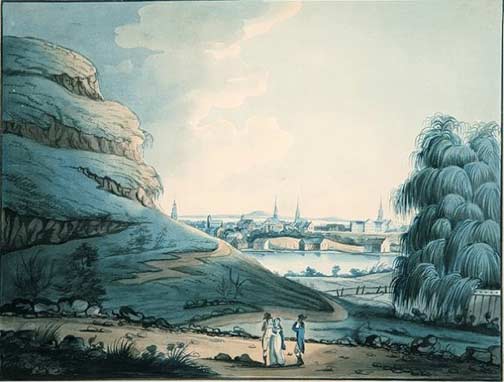 This 1798 watercolor shows Collect Pond looking south toward New York City, which then barely reached the City Hall area. Manhattan was then quite hillier; some of the soil from leveled hills was later used to fill the pond space. 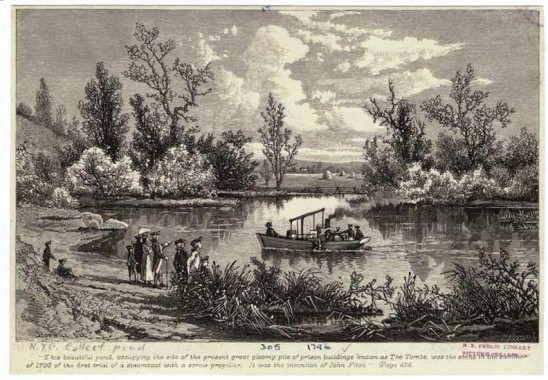 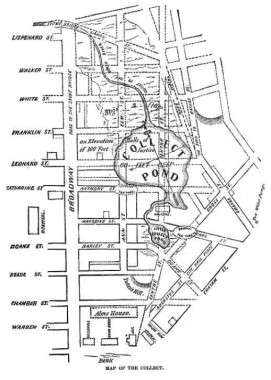 By 1800, NYC had begin to encroach upon the pond, which had already been surrounded by breweries, tanneries, and slaughterhouses which had began to turn the freshwater pond into an open sewer. The decision was made to drain it and fill it in by the 1810s. Canal Street, in part, is built atop a canal built to facilitate the Collect Pond drain. 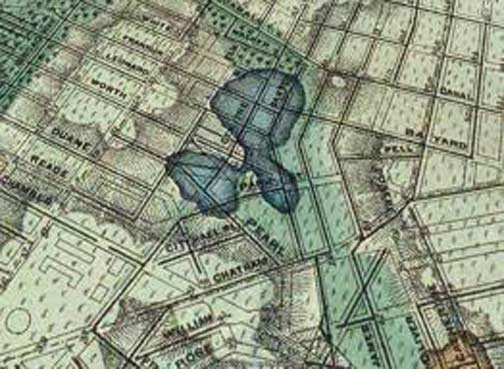 Even after the pond was drained it remained marshy and mosquito-ridden, and the notorious Five Points slum (at today’s Columbus Park at Bayard and Worth Streets) sprang up after the pond disappeared. It would remain until the latter part of the 19th Century. 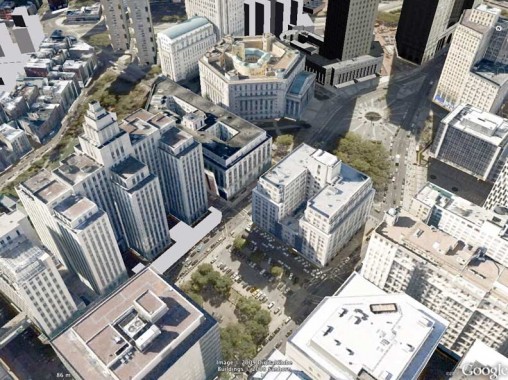 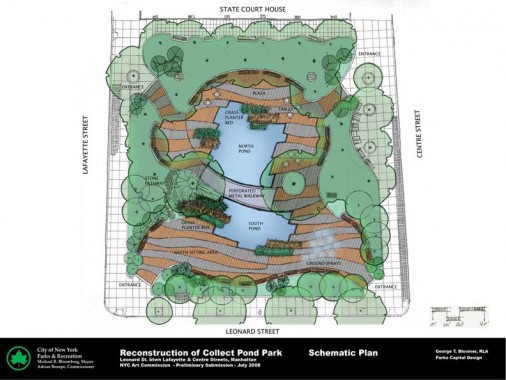 The restoration of the legendary pond began with former Parks Commissioner Henry Stern, who renamed Civil Court Park after the pond, putting its name back on the map. In 2008, the city announced a $4.6 million project to expand the park by a third onto an adjoining parking lot, with a bean-shaped pond taking up much of the redesigned park. A footbridge spanning the pond’s waist hearkens to the original pond’s shape, providing a historical link to a pond that has had such a huge role in the city’s history, before and after its burial.

The new Collect Pond Park is expected to open by mid-2012.

Another waste of our tax money; it became a sewer in the 19th century and it will become a sewer again, as the homeless use it for a toilet.

I think the restoration is a terrific idea, harkening back to the city’s natural history. I never realized “Collect” was a transliteration of the Dutch – I thought it referred to the water ‘collecting’ there! I always learn something new from Forgotten NY.

I, too, always thought Collect had been an English verb, not a Dutch noun. New Amsterdam’s 17th century heritage continues to manifest itself right into New York’s 21st century.

Well just because someone says that Collect Pond got its name from the Dutch word for Chalk, doesn’t make it so!!! I still think it was named on the basis of it being a collection pond for water rather than anything to do with chalk — what chalk? Manhattan is granite.
It seems more appropriate to have been named Collect Pond for the water collected from the runoff from the surrounding area. Mott Street is still a bit higher than the depression that is now Columbus Park/Centre Street where the Tombs are.

And you know better than historians? Who cares what you think. I care what educated historians think.

A hundred years from now, they are going to read what Chris wrote here and wonder what his problem was! Can you put your thoughts in a coherent grammatically correct sentence?

I think it’s a good idea, evoking the original pond.

But, if you look at the original Collect Pond, the Collect Pond Park is offset from the original pond. They just wanted to beautify the area which is used by the police and judiciary during the work day as opposed to put anything of use for the people living in the area.

More residents need to be aware of the hidden historic treasures in our great City so they are not carelessly abandoned to people without a clue. The reconstruction of the Collect Pond is a step in the right direction.

Looking at that watercolor really does show how much that area has changed since then, especially because it looks like nothing like that now.

I live across the street from this park. Between the courthouses, the detention center (a block over on Centre), the homeless shelter and what until now was mostly a barren parking lot, this stretch of Lafayette street and the surrounding blocks make for a pretty grim neighborhood.

My Gawd, if you live across from the park, you must be living in the Tombs. BTW. what were you arrested for?

We talk about “the land of Opportunity” and all that but, we complain about history. This website should appluad the fact that NYC is looking back and not just over it’s shoulder. Many Irish came from the emerald isle during the potato famine. Many Jews sought a better home, the Italians made their home here and so did the Asians. This is history. If you would be so kind as to see what made this city so wonderful… The struggle of the people of Five Points and yes the first freed slaves made their home in Cow Bay… Don’t worry about your damn tax dollars when there are thousands of souls that braved the hardships of anti-bellum NYC to pave the way for what we have now.

Yes, I’d love to see more Corvington’s and I am an advocate for preservation but, what we have here is a small memorial for the people who struggled harder than we did. No job? I am one of those. Try cholera.

Build it. Be thankful and build from it 🙂

Not sure what your point is here….

Sounds like J. Cashman’s point is that our concerns over present day taxation don’t compare to the concerns that immigrants and freed slaves had in past centuries. His last sentence implies that the unemployed of today have it good compared to the cholera victims of past centuries. The two items are unrelated in reality.

I agree that we need reasonable preservation efforts but it’s more important to people living in NYC to have a healthy tax base and reasonable taxation. I live here now in NYC in 2011 and don’t have an endless supply of money to pay in taxes.

+KJWalsh re J Cashman — Here it is in 2017 and I was thinking the same thing. But this is about NYC — land of the incoherent.

Oak Lee comes off as quite the bitter pessimist. He likes to take jabs pseudonymously. ( I assume it’s a pseudonym.)

I think it’s an interesting idea, but as one other commenter noted, probabaly a misdirection of funds that could be applied elsewhere. Just because something has “history” doesn’t mean it needs to be preserved.

I hope that the next time me and my husband will be in the NYC area we can make it down there to check out the newest park. Way to go!

[…] was a swampy patch of land in the area around what was then a pristine body of water called the Collect Pond. During the colonial era, the pond was a major source of drinking water, and part of the pond was […]

Was it ever started?

[…] Pond Park Image by Hobo Matt The Parks Department has plans to rehydrate this little downtown plaza that lies within the historical boundaries of Collect Pond, one of the […]

March 29 2014 — I’m making a short film about the area and have been all through there in the past 2 weeks…I couldn’t really even tell where the reconstruction is supposed to take place.

[…] to notice the lake/pond I’m standing in is pretty darn dry. Well that’s all part of the long history of environmental issues this lake has faced due to a series of not so smart city planning strategies over the course of […]

It makes one wonder if it might be a touch haunted? Consider this, The Collect Pond besides being a source of fresh water
it at one point was drained and filled to some degree then made into NYC’s first jail the Tombs. In the book “Gotham” by Burroughs
and Wallace and the podcast “The Bowery Boys” they discuss in length how crime and punishment were meted out there. There was the fact that
the building was sinking. Water continuously leaked into the cells which were in the lower levels and basement. There were executions carried out there
as well with hanging from the neck after walking under the “Bridge of Sighs”. Yes, there was and is a place and the musician Robin Trower wrote his song and album with the same name.
I think the prisoners had to walk under or may have even been hanged from that bridge. Our history is smattered with all sorts of dark events. It so much so that if ghosts are real then there should be ghosts on every corner and midpoints of the city block. I’ve never seen one so I’m not saying yes to ghosts.