There it stands at the north end of Cadman Plaza in downtown Brooklyn near the Brooklyn Bridge entrance, a litle-visited memorial to a little-known NYC Mayor. William Jay Gaynor (1851-1913) was from upstate Oroskany, NY, served as the 92nd NYC Mayor after a stint on the NY State Supreme Court from 1910 to 1913, dying in office. Though he was boosted to office with the aid of Tammany Hall, he showed a disturbing (to the Tigers) propensity for independence, refusing to proffer patronage jobs to Hall insiders. When he took office, he was a former Christian Brother, and this past may have weighed on his mind about what practices to pursue as Mayor. This stubborn independence may or may not have led a former city employee named James J. Gallagher to shoot him in the throat, on a steamship moored in Hoboken, in an assassination attempt early in his mayoralty. He partially recovered, and was able to complete 3 years of his term before finally succumbing. The bullet was never removed. 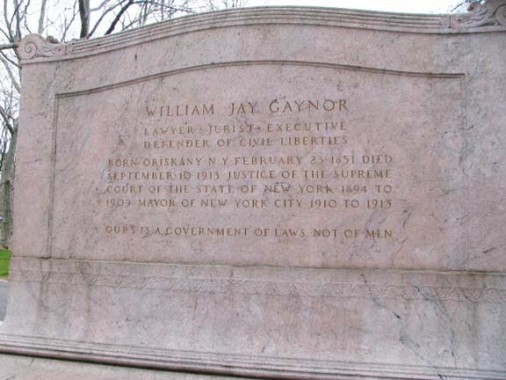 An inscription on the back of his memorial reads, “Ours is a government of laws, not of men.” His incorruptibility was his greatest legacy; it may have cost him his life.

“Gaynor was that great rarity in American political history: a judge who actually believed in the Bill of Rights. When he sat on the bench in Brooklyn he tried to enforce it to the letter, to the natural scandal of his brethren of the ermine. Scarcely a day went by that he did not denounce the police for their tyrannies. He turned loose hundreds of prisoners, raged and roared from the bench, and wrote thousands of letters on the subject, many of them magnificent expositions of Jeffersonian doctrine. Unfortunately, his strange ideas alarmed the general run of respectable New Yorkers quite as much as they alarmed his fellow judges, and so he was always in hot water. When Tammany, with sardonic humor, made him mayor, he began an heroic but vain effort to give New York decent government. He might as well have tried to make the stockyards of Chicago smell like a field of asphodel. In the end, worn out and embittered by the struggle, he died unlamented, and today political historians scarcely mention him. Yet he was a great political philosopher and a great soul. It is the tragedy of the Republic that such men are so few, and that their efforts, when they appear, go for so little.” H. L. Mencken 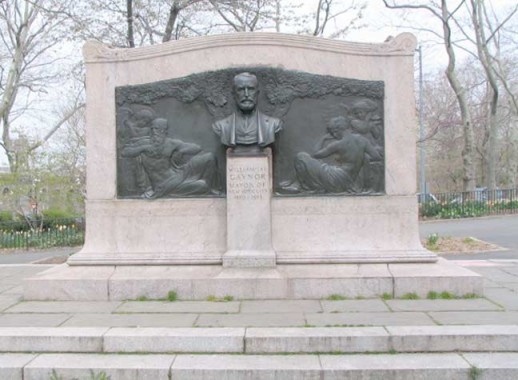 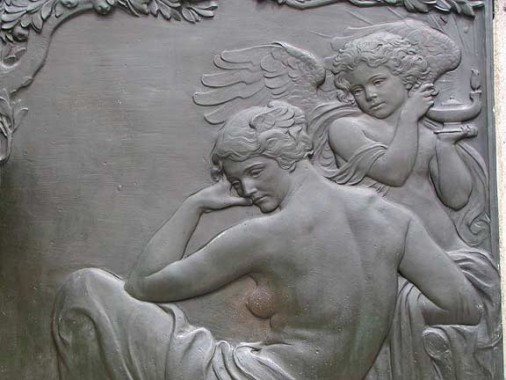 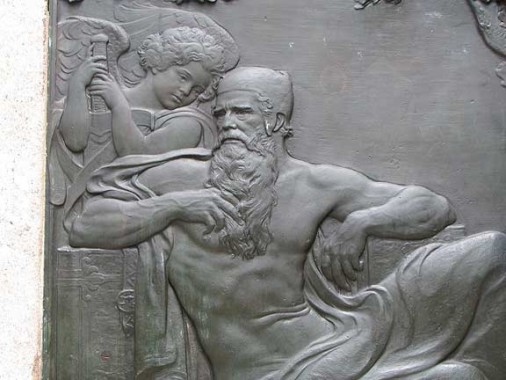 The Gaynor Memorial, a bust flanked by a bas relief mural with allegorical depictions of law/strength on one side and ease on the other, was dedicated in 1926, 13 years after the mayor’s death. Gaynor was a resident of Park Slope and would, on occasion, walk to City Hall across the Brooklyn Bridge. 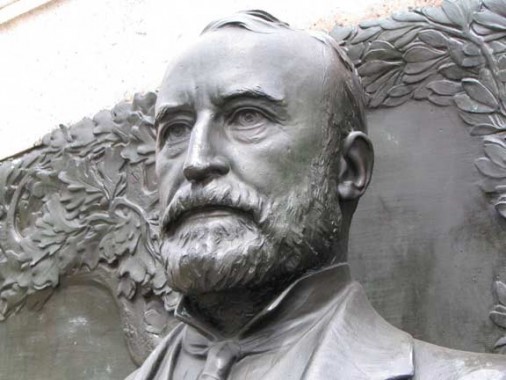 The memorial was executed by Adolph Alexander Weinman, a prominent name in American sculpture and coinage in the early 20th Century. His other works include the Prison Ship Martyrs Monument (1908) in Fort Greene Park, Civic Fame, the gilded statue at the top of the Municipal Building, and Gaynor’s successor, John Purroy Mitchel, at 5th aAvenue and 91st Street at Central Park. The “Mercury” dime and “Walking Liberty” half dollar, both introduced in 1916, were also Weinman’s.

Always wondered about this. Thanks for investigating!

The NYC Fire Department also named a Fireboat after him. It was the William J. Gaynor and was in service from 1914 to 1961. It was the last of the ‘steam powered’ fireboats.

I like your site very much, I have never been to New York City but I find your site very informative. I live in Herkimer County which is not far from Oriskany, New York where Mayor William Jay Gaynor was born.

Sorry to be a latecomer, but…there’s a great biography of Gaynor that is well worth reading. It is The Mayor Who Mastered New York, by Lately Thomas. Might be available used on Amazon; I think it was published in 1969.

I learned the name William Jay Gaynor because it was used as the name of a Jr. High school in Peter Beagle’s book, “Tamsin” and I was curious. I’m fascinated by history (even when it’s outside my own area of research) and this site gave me some new windows to look through when looking at the world.