Cul de sacs and alleyways have always held a fascination for me. However they are rather scarce in New York City, which has a grid system of streets not only in Manhattan, but in many locales in the other boroughs; service alleys behind buildings are rare as well, which means trash and refuse has to be left in front of houses on the sidewalk, unlike many other towns.

In NYC when you see an dead end or alley, it’s most likely the result of a real estate development, old or new. Staten Island is full of recently built loop streets or dead ends. The architecture there is bland and boring since it was built in the modern age, when cost is paramount. In the 19th Century, though, such developments were built with somewhat more panache and pizzazz.

On the borderline of Crown Heights, Bedford-Stuyvesant and Weeksville, two alleys protrude north from Atalantic Avenue between Kingston and Albany Avenues. Atlantic for the most part is a relentless stretch of auto body shops, gas stations and light manufacturing along the Long Island Rail Road, which runs down the middle of the street on an elevated trestle. They stand out with their detailed and ornamented exteriors, with corner cupolas and turrets. Both have recently been given NYC Landmark status in a small district. 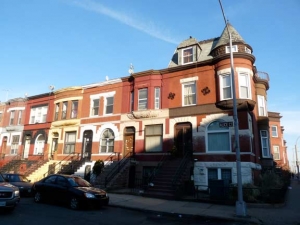 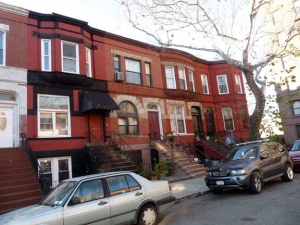 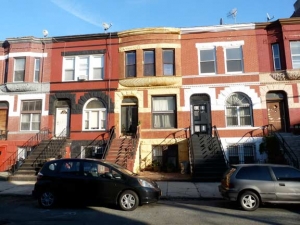 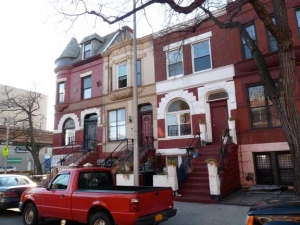 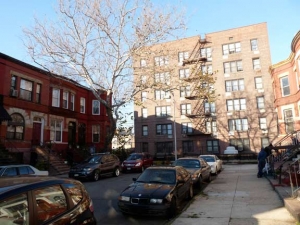 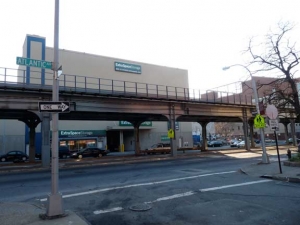 From the LPC Designation Report: The Alice and Agate Courts Historic District consists of 36 row houses set on two halfblock cul-de-sacs designed by Brooklyn architect  Walter M. Coots in the Queen Anne style… a native of Rochester, MN, Coots relocated to Brooklyn in the 1880s and became prominent as the designer of row houses and other mainly residential buildings. Constructed of red brick, brownstone, bluestone and terra cotta, the buildings of Alice and Agate Courts feature asymmetrical facades, but use collective symmetry within the rows themselves and repeating decorative details to create an interesting overall composition. Among their prominent features are conical-roofed corner turrets, projecting or swelled bays, rock-faced and carved stonework, foliate- and geometric-pattern terra-cotta and metal trim, elaborate ironwork and stained glass windows. To a large extant, the rows retain their original appearance and much of their original material. Situated just north of the busy thoroughfare of Atlantic Avenue, these Queen Anne-style houses form a quiet enclave on two  cul-de-sacs and represent the small-scale residential development of late-19th-century Bedford Stuyvesant. 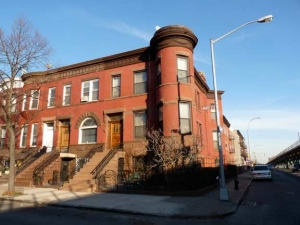 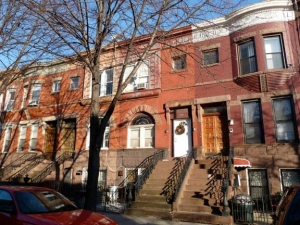 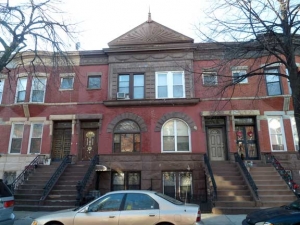 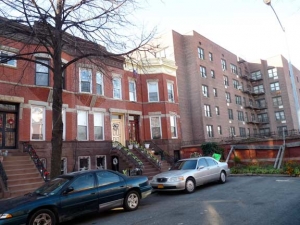 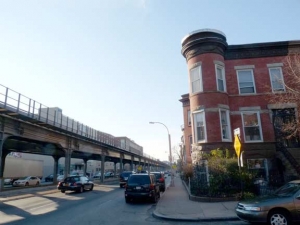 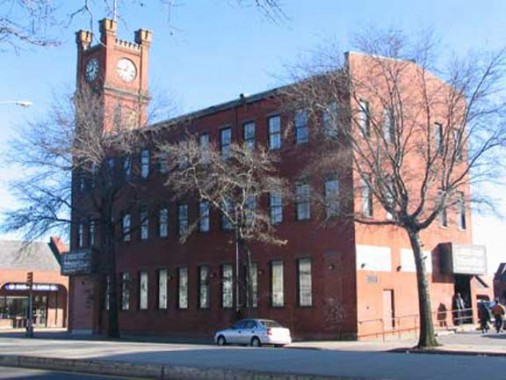 The two-court complex was built for Swiss industrialist Florian Grosjean, who set up an importing business with French businessman Charles Lalance in 1850. The firm gradually expanded into a variety of products, including housewares, champagne, tinware, sheet metal and hardware. L&G became a nationally renowned manufacturer that was among the first to make porcelain enamelware, a cheaper, lighter alternative to heavy cast-iron cookware, under their brand name, “Agate Ware.” Eventually L&G opertated a small company town in Woodhaven, with a number of brick manufacturing plants along Atlantic Avenue of which the 1876 clock tower is the only survivor. Workers’ housing nearby along 95th Avenue and elsewhere does survive, but in a heavily altered condition.

In addition to cookware L&G was one of the biggest names in tin stamping and license plate manufacturing. After sales declined in the 1950s, however, L&G went out of business.

The courts seemed to be a real-estate venture by Grosjean, who was quite wealthy by the time they were built:

The early residents of Alice and Agate Courts were middle- to upper-middle class renters that included bookkeepers, clerks, salesmen, builders, stenographers, and publishers, as well as an engineer, a shoemaker, an architect, a cigar manufacturer, a nurse, a teacher and a minister. The ten- or eleven-room houses accommodated families that often included in-laws and a live-in servant.

Advertised as “perfect gems for quiet, refined families,” the “handsomely decorated” houses were located “just 15 minutes from [the Brooklyn] Bridge” and featured “hard wood floors, cabinet finish, mantel mirrors, [and] tiled hearths” on “private streets” with “lawns [and] fountains, all kept in order by [the] owner.” Yearly rentals cost $500 at Agate Court and $540 at Alice Court, with higher prices for the end and the corner buildings.

Frequent ads in the Brooklyn Daily Eagle indicate that there was periodic turnover among the early tenants. LPC

Alice Court was named for Grosjean’s daughter, Alice Marie, and the Agate Ware in which he had made his fortune.

Full Landmarks Preservation Commission Report, which gives a detailed history of the neighborhood and thoroughly describes every house on the two courts.

The connection with Grosjean is very interesting!

That plant was in my bicycling purview as a youth in Cypress Hills. It was, I recall, partially a Christmas ornament company (I’m sure you know the current building is just a remnant of the original size). I have a recollection of it being Shiny Brite, but maybe I thought ALL ornaments were Shiny Brites back then.

love your site. such awesomely written and interesting stories. makes me miss n love ny even more. thank you so much!

I’ve seen those cul-de sacs while driving on Atlantic Avenue. Interesting to read about them.

If you really wanna see some fantastic Alley Way, and majestic Court Yards and back yards, you have to go to Flatbush where I grew up, Linden Blvd, Lenox Rd, bet Rogers & Nostrand Ave’s has some awesome alley ways unfortunatley like alotta Brooklyn Alleys they are now gated up, for security reasons I’m sure, but they were a childs paradise 🙂

I’ve noticed these building during the years I spent commuting to Brooklyn College on the LIRR. I always knew they had some wonderful history attached to them. Thanks for sharing!

There is an error in your reporting of Walter Coots being from Rochester, MN. Walter Coots was my maternal grandfather and was born and raised in Rochester, New York, thus the transition from Rochester to Brooklyn during his lifetime was an easy one apparently as he was a native New Yorker. He was the son of another renowned architect, namely, Charles Coots of Rochester, New York, with many of his own achievements in the architectural field in his name. Thank you for noting this correction.

My husband’s great-grandparents are listed as renting 6 Alice St. (Joseph & Addie Corwin). I have pictures of Addie sitting outside in the front of 6 Alice holding my mother in law as an infant in 1918.