FROM AN L TRAIN WINDOW

When you were a child did you ever get excited when you were riding a train and suddenly, the car was awash in sunshine when the train emerged from the tunnel and vaulted onto an el structure? My ex-line, the R train from Bay Ridge to Queens, hasn’t done that since 1987 when the R was rerouted to 71st/Continental (from its old terminal, Astoria), and it now plies its entire route in tunnels.  On the other foot, my line since 1992, the #7, spends almost its entire run on els, with only 5 westernmost stations, and one easternmost, in a tunnel. I still rush for the window when a train comes out of a tunnel like Pavlov’s dog started salivating when the dinnerbell rang. (I also salivate when a dinnerbell rings, but that’s another blog).

Recently, on my way to Canarsie for a lengthy walk in eastern Brooklyn, I stood by the doors and aimed my Panasonic Lumix out the window at the passing scenery. The Canarsie El has a lineage dating to the 1860s as a steam railroad line. When over a dozen subways and els were built as part of the IRT/BMT Dual Contract initiative in the 1910s, the Canarsie was put on an el to do away with grade crossings, and all but one, at East 105th Street, was eliminated — that one was not eradicated till the almost ludicrous late date of 1973 — just a year before your teenage webmaster began to explore Brooklyn on a bicycle. 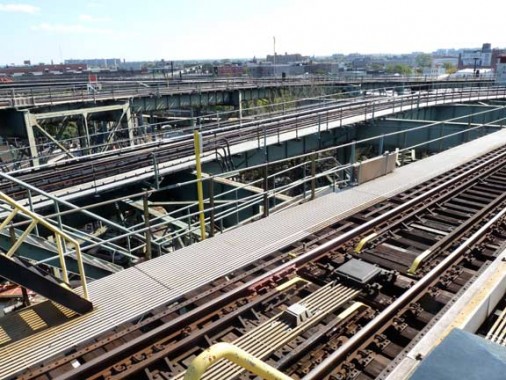 The Broadway Junction is an elevated mass of metal where Broadway and Fulton Street come together. Brooklyn’s Broadway el (J train) and the elevated Canarsie Line (L train) can connect here, though revenue trains haven’t done so since the 1960s. The Fulton Street el also intersected these two lines running east to west until the 1950s. Today, passengers can transfer between those two lines, as well as the underground Fulton Street IND line, or the A train. 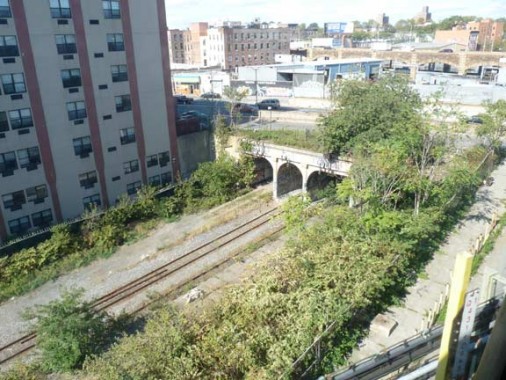 Further south, the L el parallels (say that fast) the old Bay Ridge branch of the Long Island Rail Road, now run by the NY and Atlantic RR. The LIRR ran passenger service here until 1924, and you can see what remains of the East New York station of that branch just inside the tunnel portals here. Way in the background you can see the brick arches that bring the LIRR Brooklyn Branch briefly to the surface here.

In 2010, I was granted an up close and personal glimpse of the Bay Ridge branch. 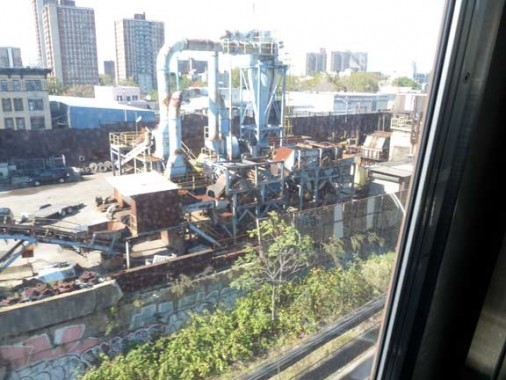 Passing Pitkin Avenue and a number of concrete plants, manufacturing and warehousing that are alongside the Bay Ridge Branch. The projects loom in the background. 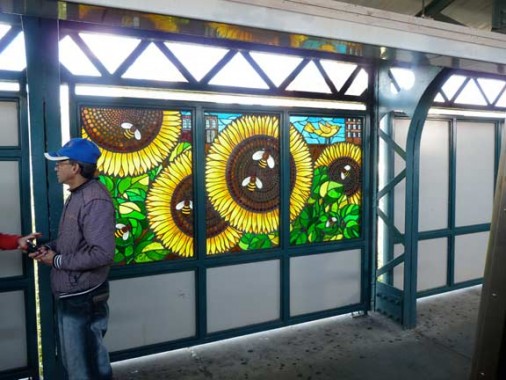 The Canarsie Line is often shuttered on weekends on one stretch or the other. A lot of the work in recent years has been involved in modernizing the platforms and windscreens, which well into the 2000s were the most primitive in the system. This is a new art installation at Sutter Avenue by artist Takayo Noda is called The Habitat for the Yellow Bird. 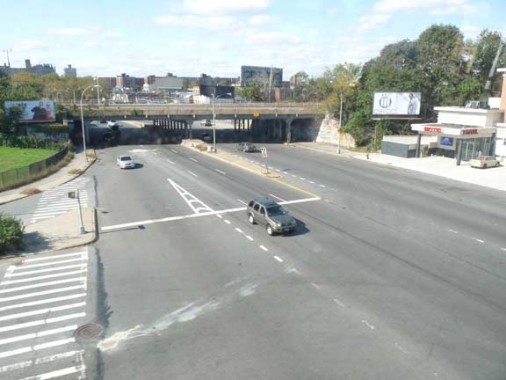 The el roars over Linden Boulevard, and the boulevard roars under the el. In the 1920s, Linden Boulevard was constructed as an extension of Kings Highway (which itself had been expanded from a country lane) for auto traffic, which was starting to come into its own. Linden Boulevard, which eventually gets traffic onto Conduit Boulevard/ Belt Parkway, was formerly called Vienna Avenue. 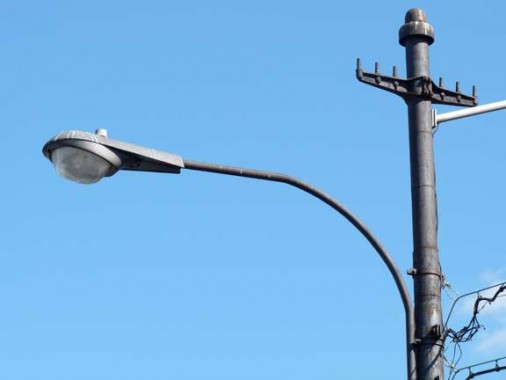 The Canarsie Line terminal at Rockaway Parkway was formerly also a trolley terminal, and several archaisms and anachronisms associated with the trolleys can still be seen scattered about, like this pole that once held overhead power lines for the cars. On it is mounted a second relic, a 1960-era Westinghouse Silverliner lamp. Fairly frequently found in the 5 boroughs when I beagn FNY in 1998, they have become increasingly rare. Just north of the border, there’s a flock of them in Yonkers.

When I grew up in Canarsie during the 1960s and ’70s, one of the sites I always used to look for out the window of the L train, was a five-story high painted portrait of Groucho Marx on the side of a building just before the Atlantic Avenue station. In my earliest memories it was already old and faded. My older brother said that before the elements had worn away the lettering you could read that it was an advertisement for Groucho’s television show “You Bet Your Life.” it was on air from 1950 – 60, and was famous for “say the secret word and the duck comes down and you win $100.”

And it was also famous for this:

A much-recounted moment centers around a female contestant named Charlotte Story who had borne eleven children. Supposedly, when Marx asked why she had chosen to raise a large family, the contestant replied, “I love my husband”, to which Marx responded with, “I love my cigar, but I take it out of my mouth once in a while!” According to the anecdote, the remark was judged too risqué to be aired, and was edited out before broadcast, but the audio of the audience’s explosive laughter was used by NBC for years whenever a wild reception was called for in laugh tracks.[5]

No recorded outtake of the exchange exists, while both Marx and Fenneman denied the incident took place. Interviewed for Esquire in 1972, Marx flatly stated “I never said that.” However, Hector Arce, Marx’s ghost writer for his 1976 autobiography The Secret Word Is Groucho recounted the claim as fact, but Arce compiled the 1976 book from many sources, not solely the then-ailing Marx himself.

I grew up on Snediker Avenue in the 1950’s and moved away in July of 1960. Behind my bedroom window was the Canarsie Line. We were between the Sutter and Livonia Avenue stations. After we moved, I missed the train lights and the noise of the train at night. Little did I know back then, that I would later have a 27 year career with New York City Transit, first as a Railroad Clerk (I even worked at Sutter Avenue once), then as a Supervisor and finally as a Superintendent. I’ve always loved the Canarsie line I used to go to work with my dad in the ’50s and ’60s and we rode home on the Canarsie line. Does anyone remember that the conductor stood inside of the middle train car, among the passengers and opened the train doors from that location? Also, certain morning trains went onto the Jamaica line to Canal Street, changing tracks following the Atlantic Avenue station.

I too remember the old Standard cars where the conductor stood inside the car unlike most similar vintage equipment as used on the IND and IRT lines. I used to ride the LL (as it was called even though the cars had no end signs) from Union Square to First Avenue to get to Stuyvesant High School from 1967-1970 (in the summer of 1969 the Standards were retired and replaced by R7-9 prewar IND cars). Earlier in life I lived in the South Bronx facing the IRT 6 line where it transitioned from the tunnel onto an elevated structure. The windows would rattle when a train came through! When we moved to Flushing, Queens in 1961 I missed the sound of the trains at night.

There were still some R9s and earlier on the Canarsie as late as 1977. I suppose the TA felt they could banish them to the Eastern Division.

So I bet you remember those flopping pieces of metal which looked like water pumps at the end of each subway car. No one else (not even Kevin) recalls what I’m talking about. My guess is that they were either some type of hand or emergency brake. The little red knob suspended from a cord affixed to the car’s ceiling was above them. Am I correct or could you please correct me if you know.

That device was the mechanical hand brake. In newer cars, it was placed outside on the bulkhead. This was to used when cars were placed in the yard, and the air compressors were turned off.

That swinging red pin was the emergency break valve. When pulled, it activated the air brakes.

My fondest memory of the L was looking at my wife from across the platform at the Graham Avenue station. She was headed for Manhattan to transfer to the 4 to the South Bronx; I was headed to Broadway Junction where I transferred to the J on the way to East New York.

The Broadway Line used to run a short line that went up and over to the Atlantic Avenue station on the Canarsie Line and ended there….this was in the 50’s

Your description of Forgotten NY is great. It brings back old memories. I have a question. Do you know where I can find any demographic information on the Franklin-Fulton or Ebbets Field area around 1945? I am writing a little piece about the Dodgers and that area in general. When I was a kid we lived in Greenpoint. My father and I used to transfer at Franklin-Fulton on our way to Sheepshead Bay. My recollection is that when we stepped off the Lorimer St Bus there at the end of the line, there was a lot of activity with a lot of Latin and Afro music being played. I remember that I was quite fascinated by it all because it was so different from Greenpoint. We always arrived there early in the morning because my father worked on one of the fishing boats and it appeared very dark there because of the El above us. Is my recollection correct? Where can I find any more information for that area of Brooklyn around 1945. Thanks so much,
Tom

Your page on the L line was fascinating. I rarely used the line, but it is very interesting and one of the reasons is that part of it runs parallel to the LIRR(now NY&A) lines to Bay Ridge. Seeing the Bay Ridge Division brought back some memories also. When I moved back to Brooklyn in 1963, the NHRR was still running electrically hauled freights to and from Bay Ridge. I believe the engines were
E-33’s.