At present, the Bronx’ Kingsbridge Road runs from Marble Hill at the Bronx-Manhattan line (it’s called West 225th Street in Marble Hill) east and southeast to Fordham Road, following a meandering path defined at first by an animal trace, then a beaten path used by Native Americans through the woods, then a colonial-era road used by both British and American troops in the Revolutionary war. However, it used to be much longer.

As related on FNY’s Marble Hill page, the road was named for a bridge over Spuyten Duyvil Creek built by Frederick Philipse in  1653. In fact, the road once led from what is Madison Square all the way north to the creek, and Central Park’s East Drive, St. Nicholas Avenue, and the northern part of Broadway follow its old path.

As Gilbert Tauber writes in Oldstreets:

There was a crude road to the northern tip of the island even before the opening of the King’s Bridge in 1693. However, “Kingsbridge Road” usually refers to the widened and improved road built north from 23rd Street about 1708, and especially to the part north of the fork at 109th Street. (The road up to fork came to be known the Eastern Post Road.) Kingsbridge Road from 110th to 170th Streets is now St Nicholas Avenue. It is now Broadway from 170th Street to Marble Hill, where it turned west on West 228th Street and crossed Harlem Creek on what was later Kingsbridge Avenue. After the opening of the Harlem Bridge Road from 90th Street, shortly after 1800, the name Kingsbridge Road was applied to the section of the Eastern Post Road between 90th and the 109th Street. Most of this stretch has been incorporated into the East Drive of Central Park. See also Weckquasgeck Road.

The Bronx’ Kingsbridge Road can be thought of as an eastern extension of the older one on the island of Manhattan.

Let’s turn our attention now on the existing remnants of Kingsbridge Road east of its formal ending at Fordham Road. The street pattern gives evidence of its existence, as you can see by checking this google map. 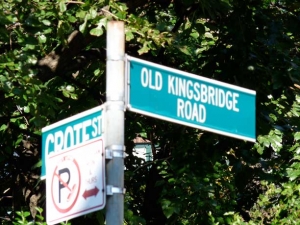 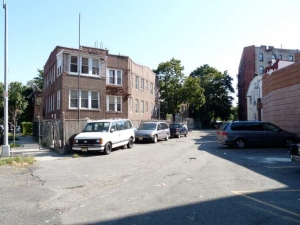 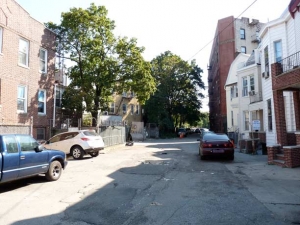 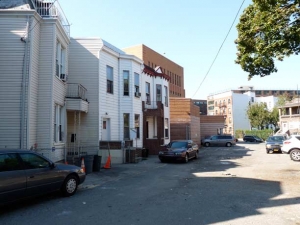 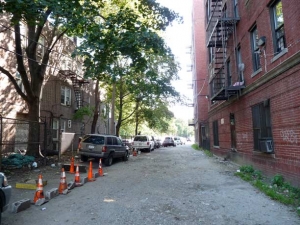 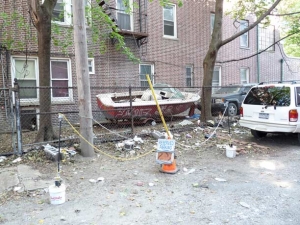 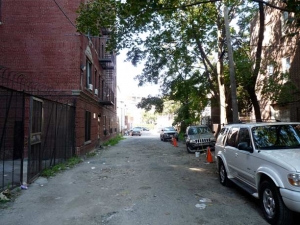 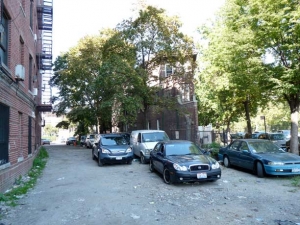 Besides the still-existing Kingsbridge Road, there is a tiny dirt path running one block between Grote Street and the intersection of Garden Street and Southern Boulevard. It is identified by a single street sign and is paved only partway: the section with a couple of houses facing it, which is likely why this section has been preserved. Undoubtedly, new development will likely eliminate it sone day.

An unpaved section adjoins a large apartment building. In effect, this historic road is a dead end off Grote Street. It should be preserved with historic signage, but that’s not how it’s played in New York City.

There is also a Kingsbridge Rd in Mount Vernon, which connects to Bussing Av in the Bronx. As far as I can determine, this is a totally separate road. It has a separate entry in the Lloyd Ultan’s History in Asphalt, published by the Bronx Historical Society.

Incidentally, I only discovered the existence of this Old Kingsbridge Road in the last several years, while working on NYC’s official maps. It never appeared on any commercial map that I’ve seen.

How do you get that job?

I was at Hunter College studying for a Master’s degree in Geography, and one of my professors was Dr. Sean Ahearn. He was heading up the project for the city’s 1996 aerials and the original NYCMAP, the city’s first map of the roads, buildings, waterways, etc. He saw my interest in and knowledge of the city, and so I worked for him through the CUNY Research Foundation, who had a contract with NYC DoITT to do the quality control for the photos and maps. That job ended in 2005 when DoITT decided not to outsource this work anymore, and I was able to get in to do the same work for them directly.

By the way, I’m featured in Adam Gopnik’s column in the November 6, 2000 issue of The New Yorker. The article was about the NYCMAP.

Take a look where the blue line drawn for Kingsbridge Road on the Google map ends at the Zoo. It shows 182nd St is connected to Bronx Park South by Nereid Ave. I can’t imagine how that happened. It is a mistake right??

Yeah, and it shows Kazimiroff Boulevard as extending south with Southern Blvd. Plenty of errors with Google Maps. I’ve submitted a couple of corrections to them years ago- it took so long, I gave up checking to see if they were ever made.
BTW, Kazimiroff Boulevard doesn’t officially exist anymore, as the city re-named it Southern Boulevard as not to confuse drivers, but it was also a slap in the face to the first official Bronx historian. http://www.nytimes.com/2011/04/12/nyregion/12name.html

Hey, how about a Southern Boulevard page Mr. Walsh?

Does anyone know who owns Kingsbridge Road? Specifically the portion at Garden Street and Southern Boulevard? I cannot seem to find anything on whether it was a historically preserved road or if it was bought by a private entity at some point.

I think it just serendipitously survived

Great post. I’m working on an historical fiction book about the Revolution, and your post was helpful in describing some of the area. If you have any historical maps or references for what it looked like in 1776, please do share.

Is there any way for a lay person to be able to “see” the remnant of the King’s Bridge that is mentioned in the book and the website as being an intact portion located below Marble Hill Avenue, between 228th and 230th streets in the Bronx?

Since birth I lived in a court house building at 770 Grote Street in Apt. 2B. My uncle Mario Licchiello owned the building. It was located on the south side of the street between Prospect Avenue and Old Kingsbridge Road. I loved that street especially Old Kingsbridhe abroad because it reminded me of being in the country. Now most of the old apartment buildings, including mine, and the cute private homes are gone, as is the little grocery store at the corner. I just hate what they have done to the area. They destroyed all of its charm because when the “disgusting pigs” moved into the neighborhood, the ruined everything and destroyed its charm. Now it looks like prison housing so I guess the pigs like that better.

I moved out of the bronx to florida and in 2008 returned…i love my bronx esp. where i grew up between kingsbridge and fordham rd…. the bx is so beautiful you just really have to search, look and research..

Where did u grow up ? Near webb avenue maybe ? Which era?

Hello, my name is, Gary De Nobrega. I grew up in the Kingsbridge, University Ave. area. We used to play in the parks of Strong Street and what we called Fort number Four park! There is a plaque there facing the reservoir! That’s where the old Jerome Park Race Track Was!!! Well as kids we would play in the Fort Four park and in the bushes was a marker!!! It stood two or three ft in height! Some old story that George Washington’s dog was buried there! Some years later vandals broke the stone marker ! I always wondered if there was any history about that marker? Curious?

I am illustrating a book about Helen Martini, the first female zookeeper at the Bronx Zoo. She lived on Old Kingsbridge Road from the 30’s until at least 1955. I’d love to find out which house she and her husband Fred lived in.

The reason it is only half paved is because the private house residents chipped in to pave it themselves. I can’t remember if it was during or right after the war. There was a fifth house where the school is now with a oversized lot. That’s where everyone on the block parked