Southern Brooklyn stations in Midwood and Sheepshead Bay on the BMT Brighton line have all been rehabilitated with new windscreens and lighting, as well as a spruce-up of fare control areas — a lengthy process that took the better part of 3 years. I was passing through Sheepshead Bay and caught a train back home at Neck Road.

Though street signs always note its proper name, Gravesend Neck Road, street signs and neighborhood residents have always called it by the much shorter Neck Road. It’s a farm road that predates the local street grid  by perhaps a couple of centuries and today runs from Van Sicklen Street in Gravesend (not to be confused with Van Siclen Avenue, without the k, in East New York) east and northeast to Avenue U and Nostrand Avenue. It used to extend further into “Gravesend Neck” which was then a peninsula, hence the “neck” in what is now the Marine Park area.

The Brighton Line, meanwhile, was built as part of Brooklyn Rapid Transit on what was then the steam railroad right of way belonging to the Brooklyn, Flatbush, and Coney Island Railroad, between Prospect Park and the Brighton Beach Hotel. In its present form, the Brighton was completed in 1907. 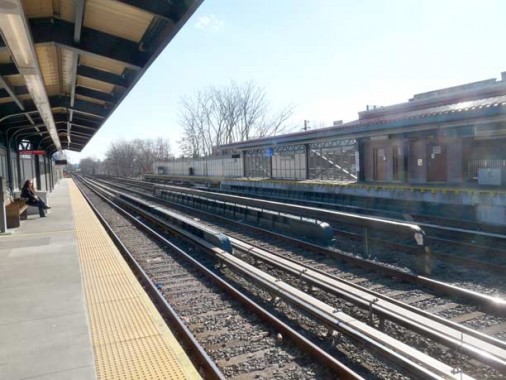 Of the four Brooklyn el lines that converge at the Coney Island terminal, the Brighton (B, Q lines) is the only one that offers scheduled express service, and that only on weekdays, the B serving as the express. The Culver (F) West End (D) and Sea Beach (N) are as of 2012 locals only. 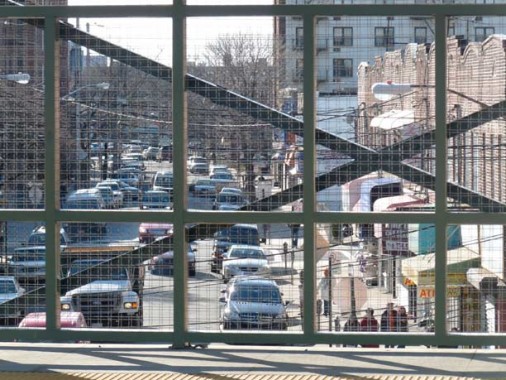 Though the new windscreens offer limited glimpses of the outside world, Gravesend Neck Road is visible from this break. 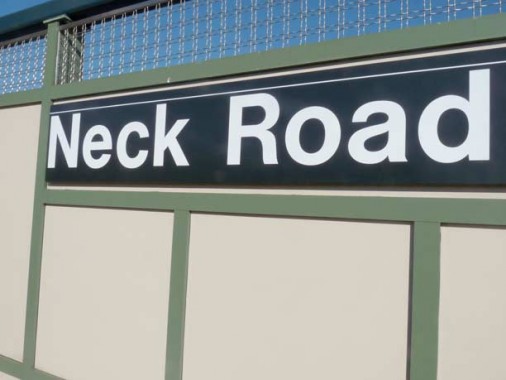 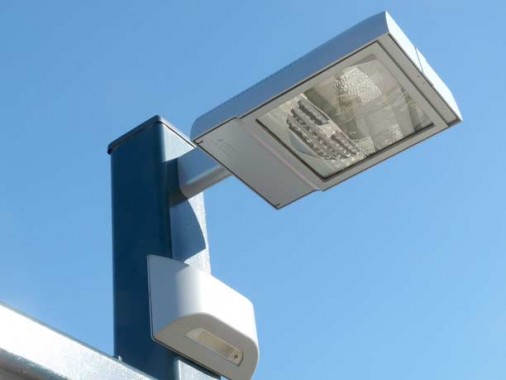 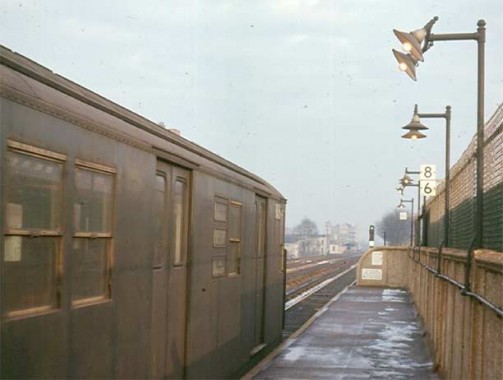 …compare to incandescent lamps lighting the walkway in 1968. photo: Brian Cudahy, from nycsubway
The “8” and “6” signs indicate where the motorman is to stop if (s)he is operating a 6 or 8-car trainset. Typical trainsets run to 10 cars, with 11 on the Flushing Line. 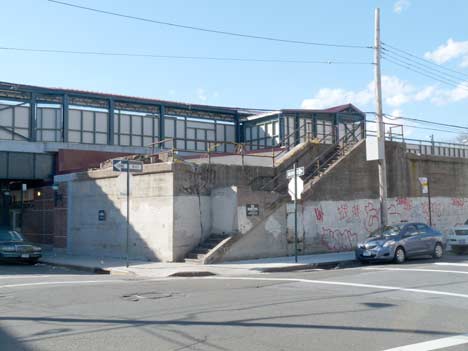 On the northwest end of the present station, a blocked off staircase ascends to the northbound track. 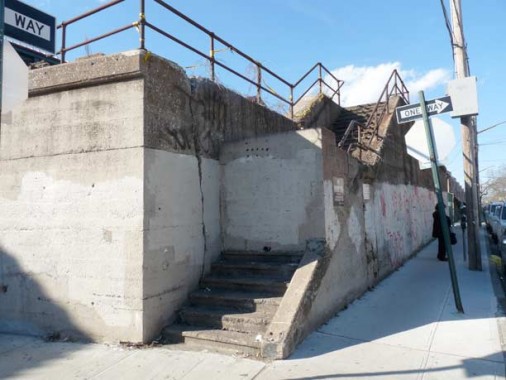 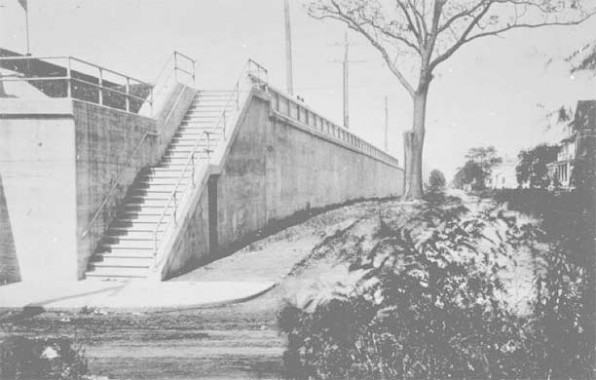 …and here’s how it appeared in 1910, when it was newly built. The stair ascended to the Neck Road passenger station of the Long Island Rail Road Manhattan Beach Branch, which was constructed parallel to the B, F&CI from 1877-1878. The railroad ran at grade until the first decade of the 20th Century, when it was placed on an embankment as southern Brooklyn became more developed and the railroad wanted to eliminate grade crossings. The lines ran parallel north to the present NY & Atlantic Bay Ridge Branch, where there was a wye connection between the two lines.

In the early 1900s there were a number of racetracks in the Sheepshead Bay and Coney Island, but when NY State outlawed horsetrack wagering (a ban that didn’t stick over the long term) passenger business on the Manhattan Beach steadily declined; passenger service on the MB, as well as the Bay Ridge Branch, ended in 1924, and the infrastructure was almost totally removed by 1938. Only this staircase, an underjump south of Avenue X, and a widening of East 17th Street are tangible remnants of the line. 1910 photo courtesy Arrts Archives

My [former] dentist’s office was near Neck Road station, and I often wondered about that staircase…

Some of the last remnants of the LIRR MB Branch. I thought the LIRR old staircase was to be demolished as part of the Brighton rebuild. Glad it wasn’t but surprised the MTA hasn’t sold off that land to a developer.

One more odd bit of this railroad in Brooklyn – in 2010 some Brooklyn homeowners sued the MTA because a 20ft by 520ft corridor of unused land was still officially owned by the New York, Brooklyn and Manhattan Beach Railroad. For some reason this mid-block strip in Sheepshead Bay wasn’t sold off and the LIRR still had ownership many decades later. A strange little story.

Two more remnants I know of – Corbin Place where the line used to end and the extended concrete walls east of the Brighton line, esp. between Ave J & Neck Road. Finally, the foundation of the old water tower was (is?) on East 14th Street in Coney Island.

I used to live on E. 18th & Neck Road when I was a kid and recall Robert Stack filming an episode of The Untouchables on that staircase and on the street in front of it.

Now, if they can only find better use for the East New York spur of this ancient railway….

I grew up right around the corner on 15th between V and Neck Road…I remember climbing up there and hanging out behind it…I also walked behind De Niro when he was filming ‘A Bronx Tale’ there and stepped on my daog’s paw by accident when i was staring at him…Gimme a break i was 12…lol loved growing up in Brooklyn and I love our history. Bklyn4Eva

I believe our photo of the staircase to nowhere, that is described as on the “NorthWest” corner, is actually on the NorthEast corner.

No it’s the NW corner.

Technically it is the N/W corner of E 16 St But yes if you are in the Station its is the N/E of the entrance to the train station.

It is the Northwest Corner. I lived right across the street. There was a pizzeria on the corner of Neck and E. 15th. Lived above that, next to G&G Bar. Thought the staircase was ridiculous but didnt hang out there because it always smelled like piss. Interesting background on it.

I grew up in the apartment building (first tenants in 1964) on 18 st between Neck Rd And Ave V. I shined shoes on that staircase in the late sixties and early seventies.

While Neck Road does end at Nostrand Ave, you can see where it goes on to the ‘Neck’. Looking on Brown Street, where I once lived, 2 blocks past Nostrand. It divides the back yards, just off Ave U. Cuts thru the property of a gas station too.

Lived here all my life have seen many changes in the 60 sNaked City was shooting an episode at that spot at Neck Road Station also the BronxTale shot scene.from Fourteen Street to Sixteen Street it’s like a little town in a five block area my parents owned Nick and Jos lunchette on Neck Road and East13th Street and we lived around the corner it was a great place to grow up and everone knew everyone u brought back so many memories for me thank u

I remember many a Frappe at Nicks. Lived on E 13 Between Neck and V.

I also remember Nicks Candy Store as i called it. I lived on 13th btwn X and Neck. Nicks is very much a part of my childhood memories.

I remember Nick & Jos vividly. I lived in the building on the corner of Neck Rd and Homecrest and frequented it. What a small world, I hadn’t thought of that place since I was a teen in the mid 1970’s.

My house was the first “new” house to the right of the corner staircase to nowhere, That was my side yard and backyard!..2258 East 16th street. That block has been destroyed by industry and congestion. It was a wonderful place to call home back in the day, but now you can’t even find a parking spot there! Glad my parents were not able to see what happened to their beautiful brick house that is now dilapidated and falling apart. Now there is graffiti on it, overgrown shrubs and my father’s flowers are long gone. The owners and residents of that block should be ashamed of what they have done to what was once a beautiful area!

I lived on Avenue X between East 17 th and East 18 th Streets from 1964 thru 1979 and the Neck Road station used to be my local stop. I always wondered what those
unused stair cases were there for, never realizing that they once served the steam railroad lines for the Sheepshead Bay racetrack whose Grand entranceway once stood
on Ocean Avenue, just blocks away from my former house in the center of Avenue X! I even remember exploring what was the ruins of the “under jump” adjacent to the
embankment on the
Avenue X side and wondering what that was once for. A google map now shows it to be inaccessible due to extensive growth of “vegetation”. I miss going to Shell Bank
JHS and Sheepshead Bay HS (class of 1969). I miss those cold winter nights in the later part of the 1970’s when it was fun going on CB radio and on just about every block around
Avenue X and vicinity, you could find at least 2 CB radio antennas (no home internet or cell phones in those days).
Anyone remember Jay Wong’s Chinese restaurant, the deli and Aaron’s Pharmacy on the north east side of Ocean Avenue and Avenue X?
Anyone remember the luncheonette on the corner (before it became a fancy restaurant and expanded onto the sidewalk) on the north west side of Ocean Avenue and
Avenue X and the hair saloon a few stores down from it which had a major fire in 1966?
A lot of pleasant memories I still have of that neighborhood and I would use either the Neck Road or Sheepshead Bay subway stations to get to work in NYC for the price of a 60 cent token.
And now……………………..I live 3000 miles away here in California but still keep the pleasant memories!

I grew up there in the 1940’s and 1950’s. As I remember there used to be a P.A.L. office at the Neck Rd. Station and a bread factory a block away that smelled wonderful.