“Q IS FOR QUEENS”: Queens culture in stained glass

One of my favorite developments in the ongoing renovations in NYC subway stations is the stained glass artwork that has been installed on elevated station windscreens. I consider the #7 Flushing Line branch my local line (along with the 7th Avenue Line trains, #1,2,3) and 8th Avenue Line trains (A, C, E) I board at Penn Station. In 1999, artist Yumi Heo’s series Q Is For Queens was installed at the Flushing Line stations on Queens Boulevard, the 33rd, 40th and 46th Street stations, dividing 26 windows corresponding to the 26 Roman alphabet letters among the three stations.

Ms. Heo is primarily a children’s book illustrator. Her windows on the #7 line demonstrate a thorough knowledge of Queens lore and history — thorough enough that I can’t identify some of them, and I pride myself on my knowledge of stuff like this.

Herewith, I’ll show you four examples and then show a list of the images I can identify and those I can’t. 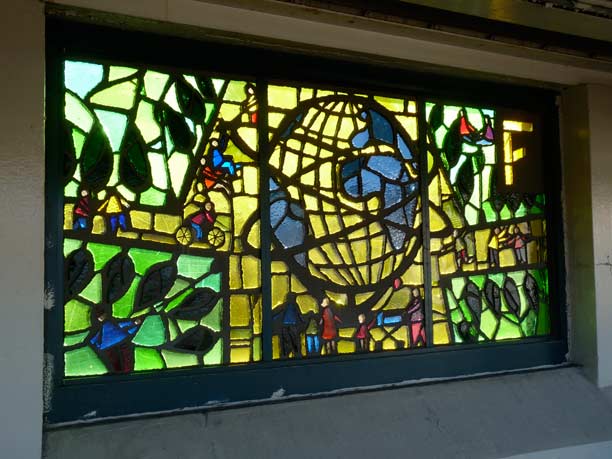 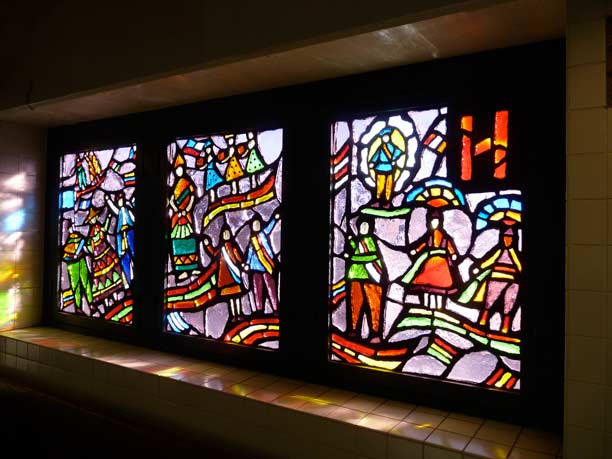 H. I’m stumped. There’s a group of colorfully costumed characters, but I can’t identify what H____ it pertains to. 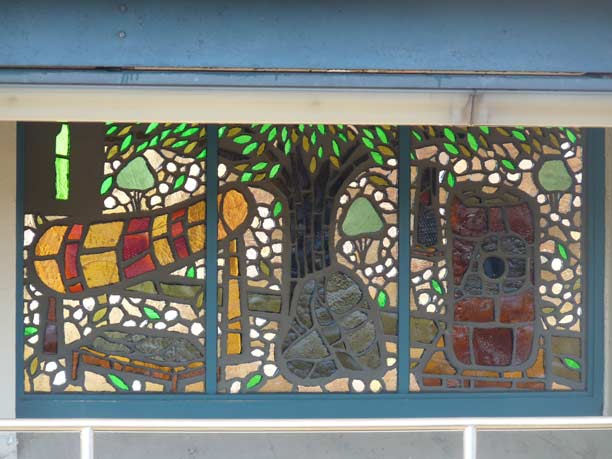 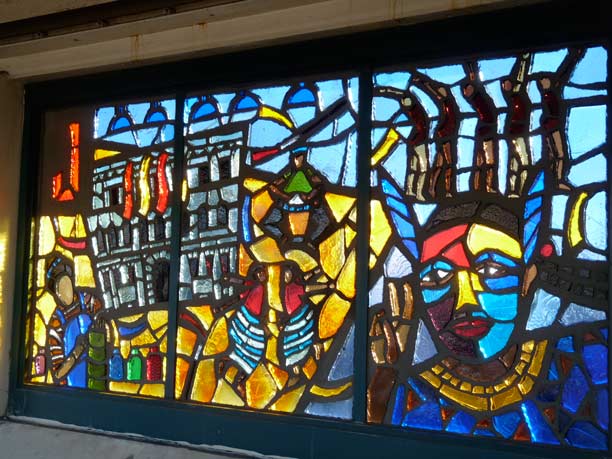 J. My vote is Jamaica, as the building on the left resembles some of those in the downtown district in Jamaica. The figures on the right represent the Jameco Indians, for which Jamaica was named.

{Recent scholarship suggests that Jamaica, Queens is indeed named for the Caribbean island; both were once under British control.]

OK. Now, consult this complete photo log of the Q Is For Queens windows at NYCSubway. I have never seen a list of interpretations, and while Yumi Heo is on facebook there is no direct contact, or I would simply ask her myself. So what do you think?

E. Ethnic Music and Dance Festival that’s held each year at the Center for Traditional Music and Dance. Gold-clothed fiddle and drum players are in the forefront of the picture. They are bending and their arms are in the air, in the midst of striking drums or strumming a violin. In the background and seemingly floating in the air is an eerie line of dancing women, their arms joined.

K. The lettering is in Korean.

M. Museum of the Moving Image.

Q. Queen Catharine of Braganza, after which Queens may or may not be named.

U. US Open Tennis, Flushing Meadows.

X. Xiang qi, the game of Chinese Chess that is played in parks in Queens’ Chinese neighborhoods.

KNOW YOUR LAMPPOSTS: the curved masts

The number 7 viaduct from Van Dam Street to 48th Street – it is hard to imagine something as attractive and functional as it is being built today.

I think “I” is for Isamu Noguchi, the sculptor. These look like pieces of art in his style–see several examples on this page that look like the striped object on the left: http://www.noguchi.org/museum/collection/sculpture?page=4

This could be the one in the center: http://www.noguchi.org/museum/collection/spin-element-chase-manhattan-garden-project

And the one on the right: http://www.noguchi.org/museum/collection/core-cored-sculpture

If I had to venture a guess at “H”, I’d say “heritage”? Maybe a more specific one, such as “Hispanic”? The brightly colored banners look like flags, and the people look like they’re wearing some sort of traditional dress.

Big fan of your blog, BTW!

The Court Square station was the only one (that I know of) not to have been part of that stained glass series. The station is finally being renovated now (closed entirely until sometime in April). I’m curious to see if they continue with the stained glass.

For the 3 years they were connecting it to the EMG ya think they could have done the windscreens then, and minimize the time the station is worked on. Not how they do it in the MTA.

The third photo contains a rather obvious phallic symbol.

Hi Kevin,
Not sure if you have had more success in finding the other letters since this post, but I found a Queens Chronicle article that might shed some light:
http://www.qchron.com/qboro/stories/new-subway-art-manages-to-convey-a-real-story-of/article_fbc1ca46-c602-5f41-8432-51dc5b875806.html
A note on X: the game being depicted is called “Go” or “Weiqi,” which is popular in East Asian countries, but the artist seems to have confused it with another Chinese game called “Xiangqi.”
Hope this helps.