In 2003 I did a series of photographs for a page on the BMT Chambers Street station, the original southern terminal of what is today the J train that runs from Broad Street to Jamaica via the Williamsburg Bridge. However, what had been an important terminal experienced a change in fortunes when tracks were extended to connect with the BMT Broadway Line in 1931:

In 1931, the Nassau Street subway loop was completed, making Chambers St. a through station south to the Montague Street tunnel to Brooklyn. It was about this time that the center platform and the side platforms were closed as excessive. The west side platform was walled up and partly destroyed when the IRT station was rebuilt on the other side of the wall in 1960-1962. All of these areas are still visible in plain sight from the open platforms. nycsubway

Chambers Street station, in its early days, also served as a terminal for Long Island Rail Road trains via a connection from the Jamaica el in Cypress Hills. That connection, though, was shut down by 1917. In the post-9/11 planning frenzy, there were wild tales about extending the LIRR from its Flatbush Avenue terminal to the planned new WTC. In those news reports, though, it wasn’t mentioned that once upon  a time, a LIRR connection to Downtown Manhattan did once exist.

Oh, how the mighty have fallen! With two platforms closed, the Chambers Street station now resembles a moldy mausoleum… 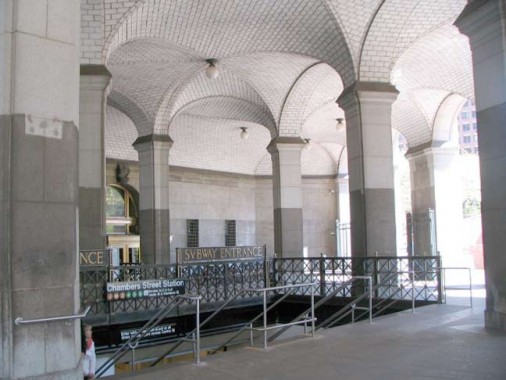 The entrance to the BMT under the Municipal Building is grand, compared to what you see once you get down there, with elegant vaulting. The entrance also provides access to the Lexington Avenue IRT 4, 5, 6. 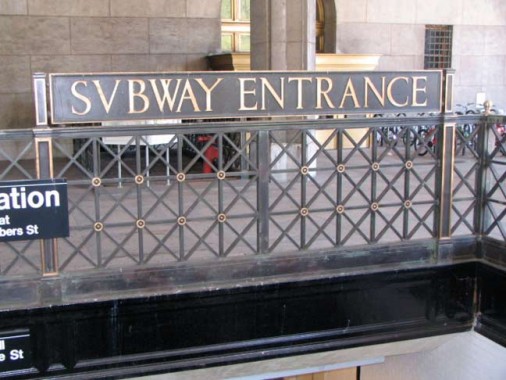 Sculptors in the days of the Roman Empire commonly carved the letter U with a pointed edge; their alphabet did not distinguish between the two letters U and V, which only became separate entities in the Middle Ages. That was when the letter W appeared as well. Modern day sculpture lettering sometimes attempts to impart an air of gravitas by rendering the U’s as V’s. For years enamel signs at Queensborough Plaza said” QVEENSBOROVGH. I wish I had gotten photos of those. 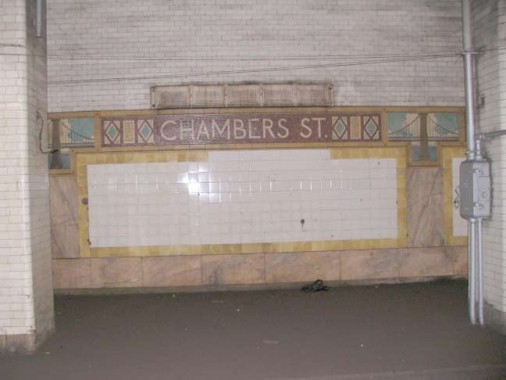 The Chambers Street station was among the first underground stations built by Brooklyn Rapid Transit, the predecessor of the BMT (Brooklyn-Manhattan Transit). Hence, the stations under Centre Street, Chambers, Canal, and Bowery, look somewhat different from the BMT stations that followed it. The BMT used a diamond pattern in sstation art, but here it shows up on the ID plaques as well as sanserif lettering. Beginning later in the 1910s, the BRT/BMT would shift to serifed letters, which in turn reverted back to sanserif with the IND in the 1930s. The pink marbled pattern, used a lot in early IRT construction, shows up here as well, but it was pretty much abandoned after this. 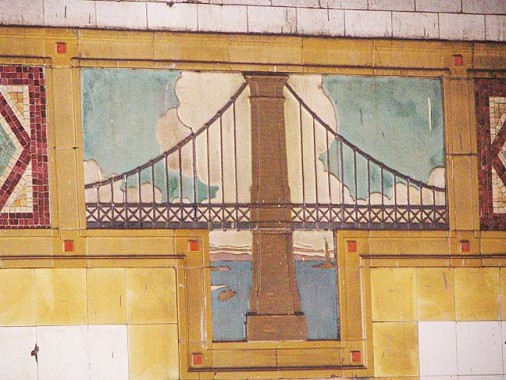 The beautiful ceramic plaque is supposed to depict the Brooklyn Bridge — Chambers Street was originally called the Brooklyn Bridge station. Original schematics depicted the bridge rendered without its trademark diagonal cables, and that was carried through when the ceramics were manufactured. Also shown are a couple of boats, billowing clouds, the Statue of Liberty and the hills of Staten Island beyond. 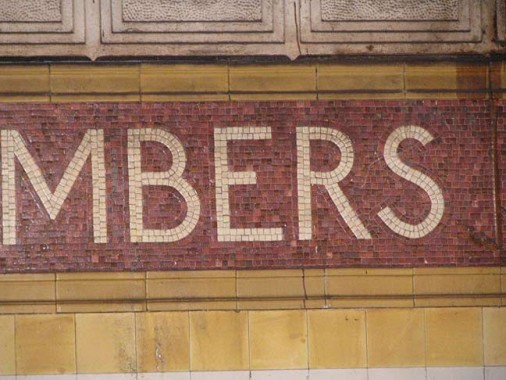 A close-up of the no nonsense sanserif lettering on the ID tablet which is rendered in subtle browns and golds. 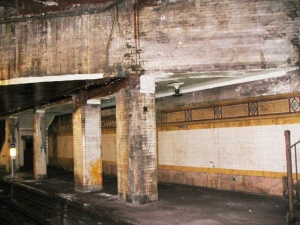 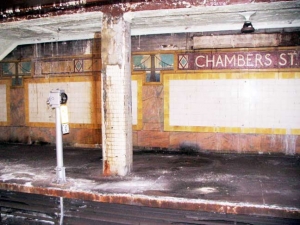 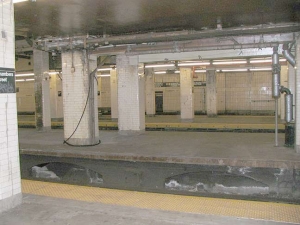 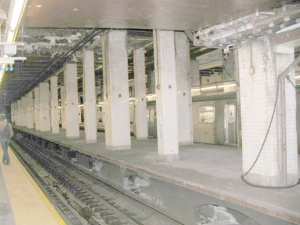 The condition of the abandoned platforms is truly shocking — this isn’t in outlying Brooklyn or Queens, but directly under the Municipal Building and across the street from City Hall. The City’s reckoning must be, why throw money at platforms that are unused. However, as this station approaches its centennial, a cleanup would be nice.

If this is in a state of permanant abandonment, why haven’t the lovely tile murals been moved elsewhere in the city (Museum of the City of New York or Brooklyn Museum or even architectural
salvage houses)? Although the current setting is wistfull and romantic, it is such a waste for these beautiful things to remain hidden and unseen….Thanks for sharing this!

Thats a good question and idea and someone should forward it to whoever makes those decisions!

the city has no money.my guess to remove the tiles and move them to the museum would cost a lot

I’m been using this station since the mid sixties and the conditions have remained the same since then. Isn’t local government embarrased by this?

A freak once exposed himself to me at that station when i was a kid.Went from stanchion to
stanchion,drawing ever closer til one of the dudes waiting on the platform intervened with his fists

If proof be needed that the MTA really doesn’t care about its stations, this is it. Even if the platform is unused, could they not at least wall it up so riders don’t have to look at filthy, moldy platforms every day? Can you imagine a station this pathetic in Paris, London or even Philly? As for its being across the street from City Hall, I’d bet a few grand that the Mayor and MTA Chairman have never seen this station every. They probably couldn’t find it on a subway map.

Even if the platforms are abandoned they should still keep them clean and maintained. It would cost money to do this but at least it would look alright. And you never know if they might need to reopen these platforms. it is part of the New York Subway and you never know if someday ridership in this station may increase to the point where they will need to increase the capacity for riders.

Kevin, thank you for this, a very interesting post. Have you visited every station in the system?

There are some i am in all the time and there are some I have been in only once in my life, like Broad Street

Kevin–Great post, as always. Your history of the use of the letter V is right on the money. It reminds me of the ancient Rome scene in Mel Brooks’s History of the World Part I: “You are nuts! N-V-T-S! Nuts!”

To Peter: Perhaps “Statve of Liberty” is more appropriate!

The MTA should install some artwork on this platform and then at least someone will get artistic exposure, and the platform would have an interesting, disheveled look and not just disheveled.

The 3rd Avenue station on the 6 line is a close second in ranking when it comers to decrepitude in subway stations.

Why the comment “this isn’t Brooklyn or Queens”…you sound like the transplants who move to the city and act like they are natives NY’ers but don’t know shit about the city. I call foul on that line!

The point is, this decrepit station is smack under the Municipal Building, right under the nose of the mayor and his administration.

The problem is that Chambers doesn’t have a line that travels north of Delancey Street in Manhattan, so for the people over at City Hall (including most of the media that covers city government), the station is basically unknown.

If the MTA ever gets around to building the Second Avenue subway south of 63rd Street and the opts for a Center-Nassau Street connection instead of a route down Water Street, Chambers will get a fantastic makeover, because it would then be carrying passengers from downtown to the Upper East Side. Until then though, it’s probably going to continue to crumble.

Chambers is pretty bad (although its been cleaned up in recent years, except for the open side platform, which remains decrepit) but there are worse. 21st-Van Alst on the IND Crosstown Line (the G train) in Long Island City is the worst I’ve ever seen.

Love reading the history of this station. Growing up in Queens,I was an early travleler on the subway systems of N.Y.Passed through this station many times during the late 40’s & 50,s.
I remember when the “STANDARDS” ruled the rails through this station.Does anyone remember the destination boards located on the outbound platforms?

Chambers street actually had three platforms that were closed, take another look at the wall opposite the side platform on the other side of the station. THAT’S NOT ORIGINAL!!!!!!!!!!!!!!!!!!!!!!!!!!!!!!!!!!!!!
Go to the end of the platform, where fake wall ends, you will see the real wall.
IND Crosstown line stations don’t even COMPARE to Chambers Street Station.
It’s not that moldy, just sad, for its despair is great.
Pictures and photos don’t describe chambers street; you must see it.