It’s a fair guess that not one person who passes this building, seemingly untenanted as of 2012, knows it is a former theater. In fact it has greatly outlived its former life as a theater. 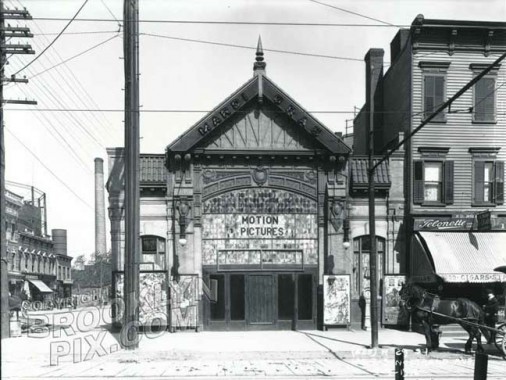 The Mardi Gras Theatre was built around 1908, apparently just before this photo was taken, on Nostrand Avenue, corner Clarkson, which can be seen on the left side of this photo. Even in this small sampling there’s some rich detail, like the tank and smokestack on Clarkson, the trolley poles and wires and horse and buggy on Nostrand. The wood frame house still has corbelling, lintels and shutters. photo: brooklynpix

It opened in 1908 and for such an early movie theatre, is quite an elaborate building on its facade. There is a half-timber gable front and decorative mouldings (today partially covered by signage and painted a darker shade of blue).

It is listed in the American Motion Picture Directory 1914-1915, but apparently closed around 1915. Judging by the size of the building, the seating capacity would have been around 350-400.

Today the front entrance is in use as a deli and grocery store, whilst the main auditorium is used for storage by a local plumbing company. 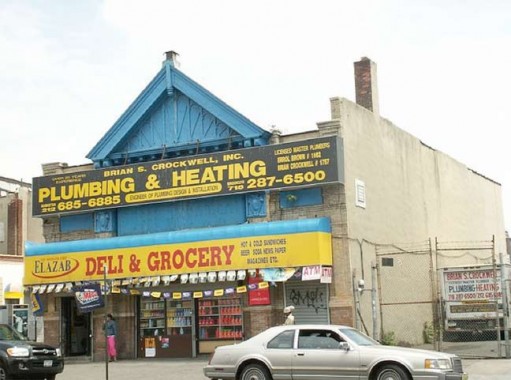 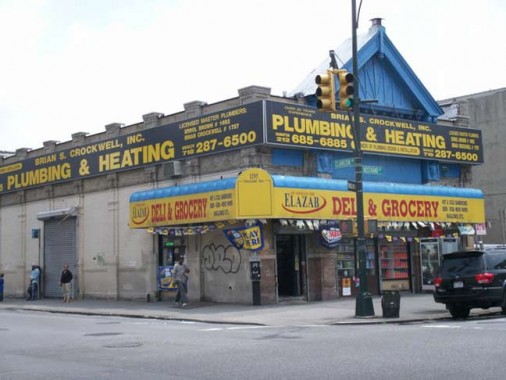 The Google Street View picture stamped 2012, in the title card, shows the plumbing and grocery signs stripped off, revealing more of the exterior. The Mardi Gras awaits its next use. 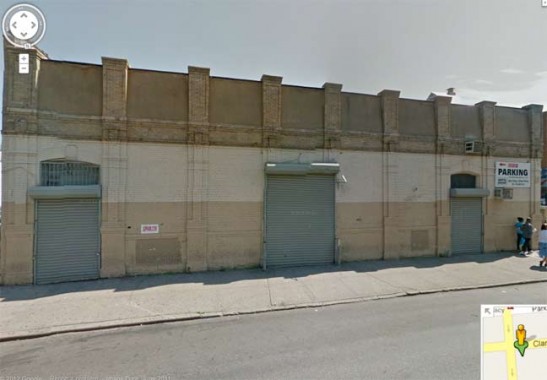 The side of the theater on Clarkson is relatively unadorned, architecturally.

Thanks Brenda Becker for the tip.

Brenda Becker’s A Year in the Park

I want soooo much to buy this and restore it as a theatre! The “Mardi Gras” original name would be amazingly apt for programming that would appeal to the Caribbean cultural flavor of the neighborhood today. And once a week I’d run “ancient” movies and charge exactly what they did then, which was probably a penny or nickel. It would be magnificent…and we’d put that little spindle-thing back up on the peak of the facade!!!

But why in God’s name would a theatre have a chimney?

They hoped to last at least till the 70’s and wanted to premier Cheech & Chong’s Up in Smoke.

For the smoke from the furnace needed to heat the place. They had heat but, alas, no air condioning.

Re:”But why in God’s name would a theatre have a chimney?”

For the popcorn maker?

It wasn’t because there was a fireplace in the joint. Open flames and theaters are an unhealthy combination. The Brooklyn Theatre Fire, in 1876, is a tragic example. The chimney was for the coal burner in the basement. Oil burners/heating systems weren’t introduced until the 1920s.

I agree; East Flatbush starts at New York Ave. This part of Flatbush has been called Prospect Lefferts Gardens for the last 40 some years.

I would like to restore the theater too,like Brenda!In fact,I LOVE acting and drama.

I grew up in this area and never knew this was a theater at one time….I used to pass it many times……

CPEX appears to be selling this building and the lot next to it as a space for condos:

Sadly, this theater was torn down to make way for a huge building……