On the fifth straight ForgottenTour in 2012 featuring beautiful weather, ForgottenTour 55 met at the William H. Seward statue in Madison Park (honoring Abraham Lincoln’s Secretary of State who engineered the purchase of Alaska from Russia) on Sunday, June 10th and toured Madison Square Park and 5th Avenue between 23rd and 14th Streets.

Among the tour’s 40 highlights… 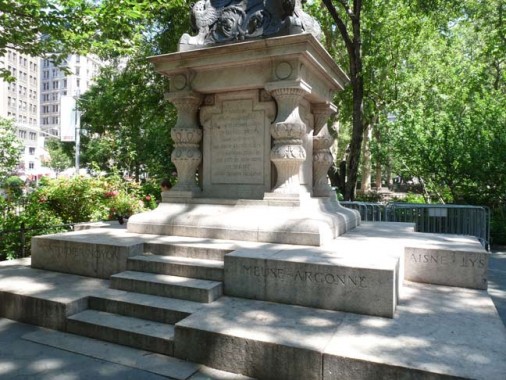 Erected in 1924 from plans by Thomas Hastings (of Carrere and Hastings, who built the NYC Public Library at 5th and 42nd and the Staten Island Borough Hall) the Eternal Light Flagpole honors the fallen from World War I and lists famous battlefields from the war such as Ypres, Lys, Cambrai, and Montdidier.

The east face has been inscribed with the conclusion of the national anthem, and the north face bears a dedication “In memory of those who have made the supreme sacrifice for the triumph of the free peoples of the world.” The west face describes the perpetually lit star atop the flagpole as “An eternal light, an inspiration and a promise of enduring peace.” The dedication also provides the November 11, 1923, date of the star’s lighting.

In 1876, the arm of the statue of Liberty was brought from Philadelphia’s Centennial Exposition to New York as a means of raising money for the base and costs of assembling France’s gift to America. The statue was finally erected ten years later. 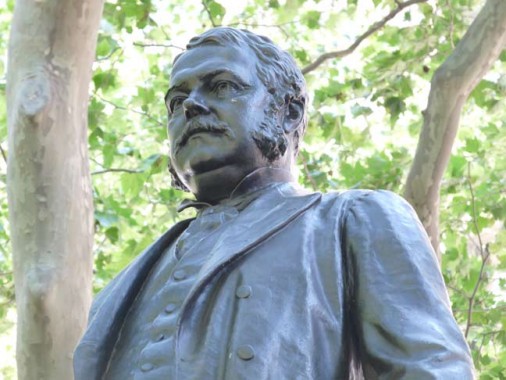 With his dignified bearing and carefully arranged whiskers, Chester A. Arthur looked the very model of a modern U.S. President (in the Victorian Age), which he was between 1881 and 1885. Born in Vermont but a transplanted New Yorker, he was elected as James Garfield’s vice-president and assumed office when Garfield was assassinated. He was a close friend of NY Republican senator Roscoe Conkling, who is also memorialized in Madison Square Park.

As President, he reformed civil service and introduced the merit system in federal employment. Despite Mark Twain’s support, he did not get the Republican nomination in the 1884 elections. However, it may have been just as well, because Arthur knew by then that he had a fatal kidney illness. He died in 1886.

During Arthur’s term, the Brooklyn Bridge opened in 1883. 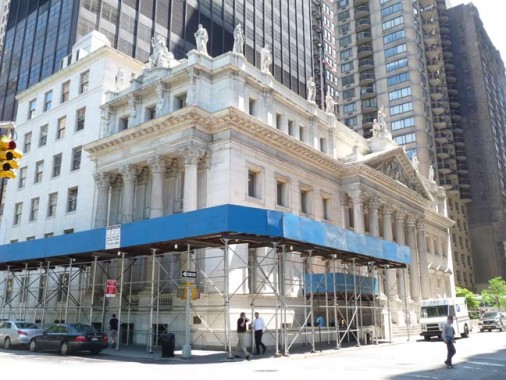 The NY State Appellate Court at Madison Avenue and East 25th Street was built in 1900 in Italian Renaissance style; much care was lavished on the building’s limestone exterior and interior art, including statues of famous lawgivers and allegorical representations of civic virtues. 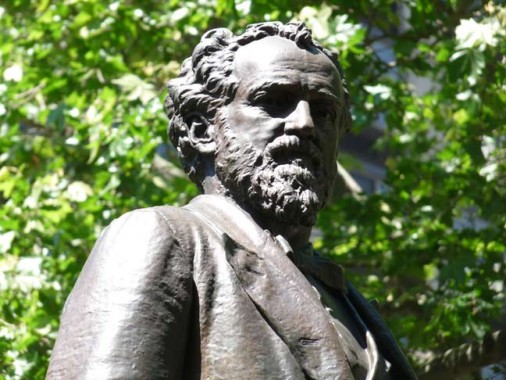 Described as a forceful, charismatic and flamboyant orator, Roscoe Conkling was Senator of New York between 1867-1881 after two stints at the House. In 1876, Conkling lost in a squeaker to Rutherford B. Hayes for the Republican presidential nomination (Hayes later triumphed in the general election by amassing more electoral, though not more popular, votes than Democratic opponent Samuel Tilden, in a situation not unlike the 2000 presidential election.)

In March 1888 Conkling was caught outdoors near Madison Square at the worst of the Blizzard of ’88 and died from exposure 6 weeks later.

Sculptor John Q.A. Ward’s memorial statue was dedicated in 1893. Ward has many statues scattered about Manhattan including the George Washington at Federal Hall on Wall Street. 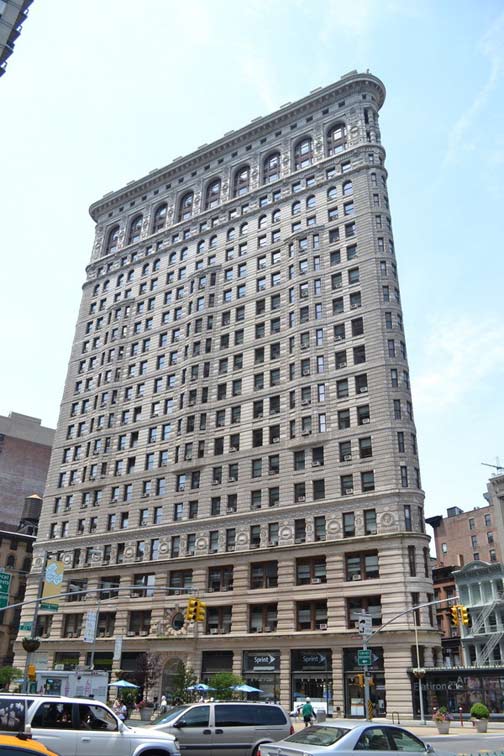 Upon completion in 1902, the Fuller Building was one of the tallest buildings in the city and the only skyscraper north of 14th Street. The building sits on a triangular island-block formed by Fifth Avenue, Broadway and East 22nd Street, with 23rd Street grazing the triangle’s northern (uptown) peak. As with numerous other wedge-shaped buildings, the name “Flatiron” derives from its resemblance to a cast-iron clothes iron.

The Flatiron Building was designed by Chicago’s Daniel Burnham as a vertical Renaissance palazzo with Beaux-Arts styling. Its original name, the Fuller Building, was for the flagship tenant the George Fuller construction company, a builder of early skyscrapers. 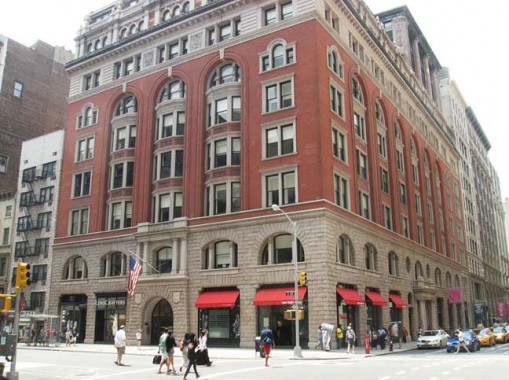 150 5th Avenue, at 20th Street, is a blend of Romanesque Revival and Queen Anne styles. Designed by Edward Kendall and built in 1888, it is the former HQ of the Methodist Church in America. It was still home to publishing firms in 1981, when your webmaster got my first job out of college here. That year, John Belushi and Dan Aykroyd had an office in the building. 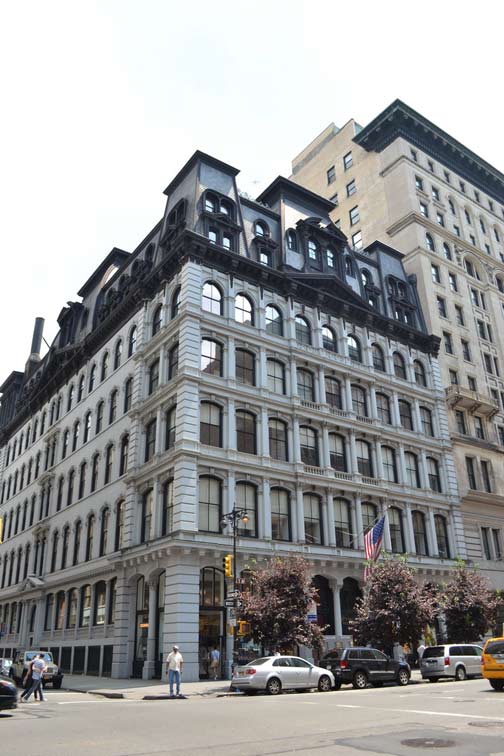 Arnold Constable & Company is a former department store chain in the New York City metropolitan area. At one point it was the oldest department store in America, operating for over 150 years from its founding in 1825 to its closing in 1975. At the company’s peak, its flagship “Palace of Trade” in Manhattan – located at 881-887 Broadway at East 19th Street, through to 115 Fifth Avenue – was acknowledged to be the store which took the largest portion of the “carriage trade”, in New York, serving the rich and elite of the city, such as Grover Cleveland, Andrew Carnegie, Thomas Edison, J.P. Morgan, John D. Rockefeller and Cornelius Vanderbilt.

I love how when it snows with thick and wet flakes a snowball quickly forms in Pres. Arthur’s statue’s outstretched hand. It really looks like he’s waiting to peg one of the express buses shooting up Madison just a decent throw away.

Whose idea was it to put that structure at the very tip of the flatiron bldg?
Should get the Philistine of the Year award.
Looks like something trump would do

I love your pages, but in your visit around 23rd St. and 6th, you didn’t even stop around the Masonic Hall there?? Built in 1907, it is a lovely place! Its main hall has a ceiling designed and built by Tiffany!

I’ve been in there and it’s a marvelous place. Our tour concentrated on Madison Square and 5th Avenue.

I have always wondered why the courthouse on E.25th Street was built with the main entrance and more elaborate and longer side of the building facing E25th Street and not Madison Avenue.

Did you go to Shake Shack to eat over in Madison Square or decided not because of either the line or the prices?

We had to continue with the tour. I eat abt twice a year at Shake Shack, when it’s colder and the lines aren’t long

There coincidentally was the annual Big Apple BBQ in Madison Square Park that day. Outstanding but which left Shake Shack for another day.

I see our friend at East 19th and 5th is still dayburning. Looks like it will soon be time to call it in again, when the second lamp burns out.

The George A. Fuller Company built a whole lot of not only early but more-recent buildings. My father was a Chief Field Accountant (working out in the field on projects), my mother was a secretary to one of the senior vice presidents and (before she retired) secretary to the in-house lawyers. As much of my childhood as was spent in Mom’s front office and on Pop’s construction sites, I’m proudly a “Fuller brat”!

I counted my childhood years by what project Pop was working on. when I was born he was working on the CBS (Black Rock) building (we had so much CBS paper cups/ paper plates/ paper bowls/ napkins etc. I don’t think we had to buy any until I was ten years old LOL), then for a stretch on the proposed new buildings at Columbia University (visits to Morningside Heights on a regular basis, and a lot of watching Columbia U play the kind of awful football even an eight-year-old can tell is horrible!), the construction of the Exxon Building, and then the Meadowlands. Pop was pretty irritated when Fuller didn’t get the contract for the World Trade Center.

Thanks for the memories!

I work at 150 5th Ave. Funny to see it highlighted here. From late 2002 to the present, it has been the home of EMI music. We used to have all the floors, but the 9th and 11th floors are now other tenants and the 4th floor is vacant. One needs to use the 20th st. entrance to access the 10th and 11th floors.

My mother used to take me to Arnold Constable in Hempstead when I was around 8 years old. I never realized it was an elitist store but my memories of it are vague; many of my friends’ are totally devoid of recognition! Your reference to the ‘carriage trade’ made me check that old expression, and it apparently has another meaning akin to lap dances of the third kind. Knowing who patronized the NYC store, that meaning probably wouldn’t prove too far of a stretch!