The I’s have it in northern Manhattan, where seemingly everywhere you go, something begins with an I. There’s Inwood, the neighborhood; Inwood Hill Park; Isham Park; and Indian Road, which runs two blocks (actually a very short block and a much longer block) from West 214th to W. 218th Streets one block west of Seaman Avenue and 4 blocks west of Broadway.

Northern Manhattan didn’t “gell” as a neighborhood until the early 20th Century as the Hudson-side large estates were sold off and became Fort Tryon and Inwood Hill Parks. The street layout wasn’t finalized until the 1910s and into the 1920s, and Indian Road, which borders Inwood Hill Park and grants the apartment houses lining it a great view of the Hudson, doesn’t show up on maps (at least the ones I have access to) until the 1920s. 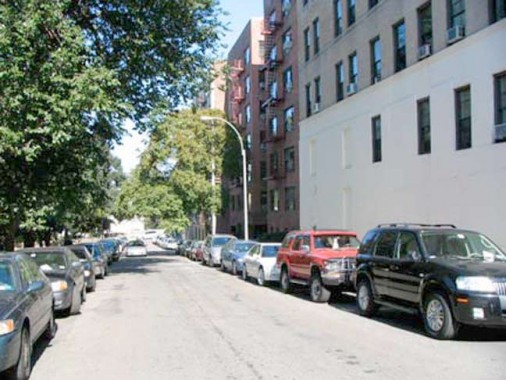 Indian Road. The trees at left are in Inwood Hill Park. 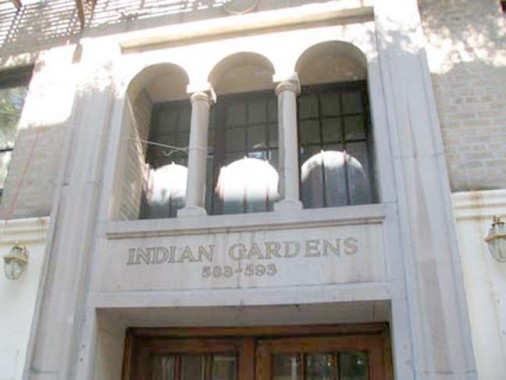 Indian Gardens, West 215th and Indian Road. The road is so named because relics and artifacts by the Rechgawawanc and Weekweskeek Indians, associated with the Lenape, were discovered during excavations in the area, and the road is believed to follow an ancient trail. 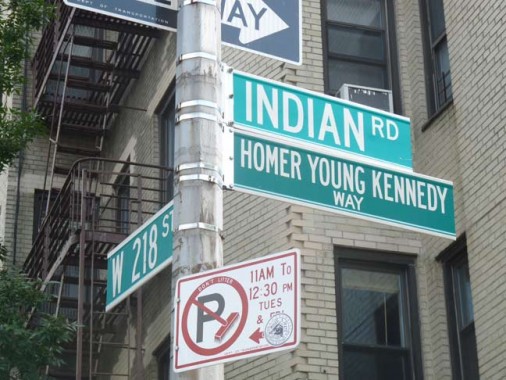 Rather amazingly, Indian Road is the only thoroughfare on the island of Manhattan named “Road.” Another “Road,” River Road, is on Roosevelt Island. 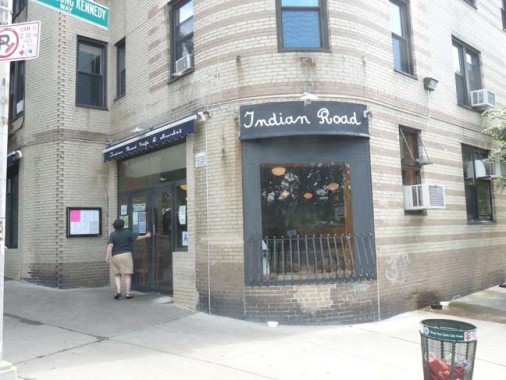 A welcome newer addition to the area on Indian Road and West 218th is the ‘eponymous’ restaurant Indian Road Café. 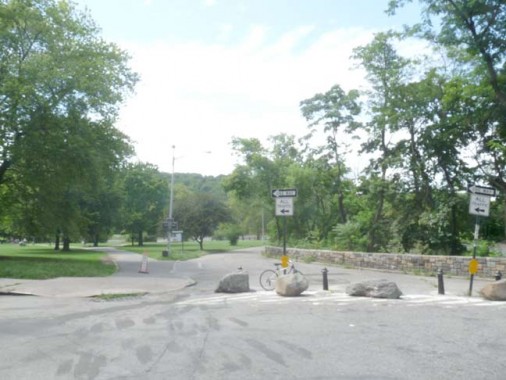 Across the street is the entrance to Inwood Hill Park, which contains Manhattan’s last old-growth forest, as well as views of the Hudson River, Henry Hudson Bridge, and the Big Columbia C.

Join us on ForgottenTour #57 in Inwood and Inwood Hill Park, Saturday, August 11th. Meet at noon at Dyckman Street and Broadway — take the A train to the 200th/Dyckman stop.

Manhattan has only one Boulevard too.

Manhattan has several boulevards (all on the northern part of the island)- Cabrini, Malcolm X, Frederick Douglas, Adam Clayton Powell, Riverside. These names are all recognized as the official names of these streets.

Inwood Hill Park also has blackberries! (Although they are probably all gone by now. They ripen in July.)

In many ways upper Manhattan still feels separate from the rest of the island. They even still had many of those hay lofts until Riverside Drive was created to tear them down when all other barns in Manhattan were gone by then even the ones in the West Village, which dotted them. Also, upper Manhattan has the only open air stadium known as Bakers Field where football team for Columbia University plays, though there is the Delecorte Theater in Central Park, but that one isn’t for sports. For the most part the upper tip looks more like what is found in the dense areas of the outer boroughs than it does with Manhattan. I think the reason why Manhattan itself doesn’t have many streets named with road after them is probably because it was planned by the Commissioner’s Plan of 1811, though the numbering of Queens streets is much different, because they tend to use road a lot there.

Yes, but I meant open as a public thoroughfare.

Indian Road Cafe used to be Murray’s Deli. He pretty much sold everything. We got our snacks from there. Then I think it was sold to Dominicans and it just wasn’t the same after that.