I spotted it from across East Tremont Avenue, just east of Boston Road. Having absorbed the Bronx map and street listings from Geographia’s ‘Little Red Book’ series, since childhood I had been aware of the existence of the prosaically-named Bronx Street, which sits at what is nearly the center point of the borough east of West Farms Square.

Older maps show that Bronx Street ran north for a couple of blocks to East 180th, but the northern sector has long been obliterated for a housing project. Though Bronx Street has been expunged from the major mapmakers save Google, it never completely died, and a fenced-off, weed-strewn section still issues north from Tremont.

John McNamara’s History in Asphalt states that this is the former site of a Revolutionary War blockhouse and later, a factory/mill.

Since Bronx Street has likely never been chronicled heretofore, I wish to introduce it to the public at large. Several bus lines converge at West Farms Square, and the #2 and 5 trains are nearby. Of couse, you can also visit the Bronx Zoo after paying Bronx Street hommage. 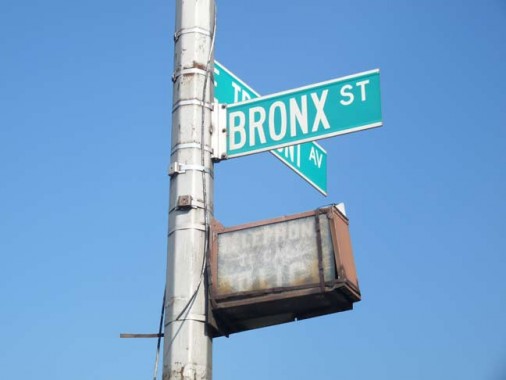 The lamppost holding the identifying street sign also still holds a battered and long-defunct lightbox pointing out the presence of a special telephone dedicated to calling the police in case of an emergency. That phone, of course, is also long gone.

I just started typing boro names into google maps and Brooklyn Rd. in BK came up and looks just as small. Any info on that?

There are NYC streets that are named for the borough in which they reside. All are far more prominent than Bronx Street. Here’s the list (if I omitted any others, mea culpa):

Manhattan has no such thoroughfare, although in the early 1900s the angled stretch of W. 125th Street west of St. Nicholas Avenue was called Manhattan Street.

There’s a Manhattan Avenue in Brooklyn, but Manhattan does not deign to name any other borough as a street name.

According to Google Maps, there is a Manhattan Avenue in Manhattan that goes from 100th to 124th Streets that is near Central Park, though the name may predate when this was part of NYC itself.

Wrote “Richmond Terrace” twice. Second once should have been “Richmond Avenue.”

Forgot Manhattan Avenue on my previous posting, so I was wrong. So each borough, including S.I.’s original name, has at least one street named after itself.

The name Bronx Street almost certainly predates the name Borough of the Bronx. Like Bronx Boulevard (and Bronx Park), I expect that it was named for the Bronx River, which is nearby. The borough, of course, was also named for the river.

Speaking of Brooklyn, it does have some interesting street names that have to with other locations. Manhattan Avenue is actually a renamed street that was two others joined when it was made into a borough. Nassau Avenue has actually nothing to do with Nassau County, but was named after someone with that name especially since it predates the actual county just like how Houston Street has nothing to do with the city of Houston. Along the Eastern Parkway, there are not just avenues named for both Brooklyn and NYC itself, but also several other cities upstate such as Albany, Rochester, Utica, Buffalo, Schenectady, Rochester, and probably some others I haven’t mentioned. Meanwhile, East NY has a bunch of streets named after several states, though Pennsylvania Avenue does continue all the way down to Marine Park.

The NYS cities avenues in Brooklyn seem to be in geographical order along the Hudson River north and then Erie Canal (Or Mohawk River) west. Nassau STREET, downtown, was named fo Robert Fulton’s steamboat Nassau.

A little to the east in East New York you will find Alabama, Georgia, Pennsylvania, New Jersey, and Vermont Avenues, with Sheffield thrown into the mix as well.

And a smaller Flushing Avenue in Queens, presumably the same one.

I also noticed on Google Maps that there is a Manhattan Street in Staten Island in the Tottenville section that runs between Pittsville Avenue all the way down to Raritan Bay, and is not far from Conference House Park at the tip of the island.

I certainly remember Bronx Street during 1940 -1960s when I lived just a block away. It was a one way street going north. It had a Chrysler dealership on the most southern corner and going north toward 180th street for its 3 block run paralleling the Bronx River it had some factories making women’s garments, a machine shop, the ABC Kalemine Door factory (makers of fireproof doors), Lipsit Chrysler/Plymouth service center and further north was a blacksmith shop by the Wheeler family (retired by the 40’s) some private homes and then parking garages and more factory buildings. It was an interesting street. Also, it passed under the IRT elevated track between the 180th street and 177th street stations. My dad would park his car in the parking garage during WW II and we only used it on Sundays. We did have all the gas we needed, BUT that is another story.