What do an obscure alley on the west end of Greenwich Village and a century-old subway mosaic have in common? Plenty, as it turns out. I wouldn’t bring it up otherwise… 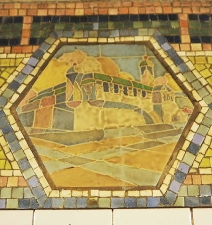 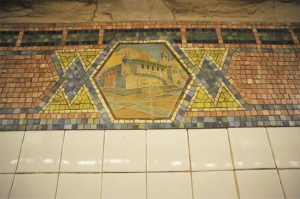 (Click on either image above for a larger view)

When the IRT and BMT engineers built subways between 1904 and 1928, under the guiding artistic hands of architects Heins and LaFarge and later, Squire Vickers they did so with not only a keen sense of design but also a dedication to history. Station after station features mosaic and terra cotta representations of not only landmarks that existed at the time they were built (many have since been razed) but also landmarks that had long disappeared.

Such is the case at Christopher Street/Sheridan Square, which features a somewhat daunting-looking building with high walls and two towers, one taller than the other. 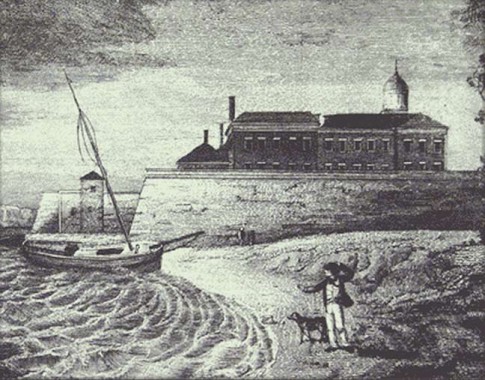 The plaques, likely the work of Jay Van Everen or Herbert Dole, according to the indispensable Subway Ceramics by Lee Stookey, depict the old Newgate Prison, which stood in the West Village between 1797 and about 1828 at the Hudson River shoreline, bordered by Washington, Christopher and just south of where Perry Street would later appear. Newgate was NY State’s first penitentiary, and pioneered radical correctional policies such as allowing prisoners light in their cells, water to bathe, no corporal punishment, visits from families, and rehabilitational training. By the late 1820s, the prison was no longer isolated and was surrounded by streets and businesses, and transferred to Ossining in Westchester County, the prison known popularly as Sing Sing (land on which the prison was built was called Sintsink by the Indians).

For more on ceramic art in NYC see Tiles in New York. 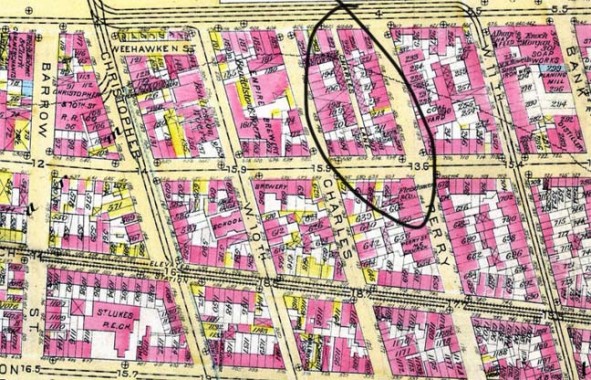 Only one tangible remnant of the Newgate Prison still exists today, the narrow, sidewalk-absented Charles Lane, which marked the northern boundary of the prison property. It appears on this 1885 map, but the City officially mapped it on official records beginning in 1893, when it gained its unusual brick paving.

Charles and Christopher Streets are named for the same man, Charles Christopher Amos, a landowner who had inherited part of Sir Peter warren’s massive Greenwich Village estate in the colonial era. Unusually, the streets were named Christopher, Amos, Charles going north; Amos was renamed West 10th Street as far back as the 1840s. 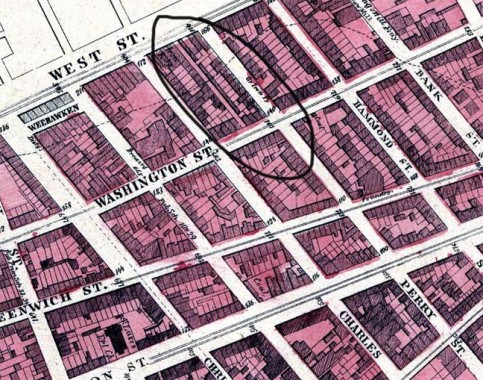 A Drips Atlas map from the 1850s shows an unnamed laneway where Charles Lane would later appear. 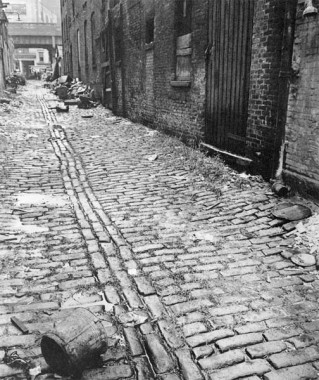 Famed photographer Berenice Abbott shot a photo of a garbage-strewn Charles Lane in the 1930s. The old West Side Highway looms in the distance. The same brick pavement arrangement still exists here. Some of Charles Lane’s one and two-story structures were originally constructed as stables.

In the late 20th Century, Charles Lane was home to drugs and prostitution as many back alleys are. Only in the last couple of decades has Charles Lane gained an aura of quiet quaintness. 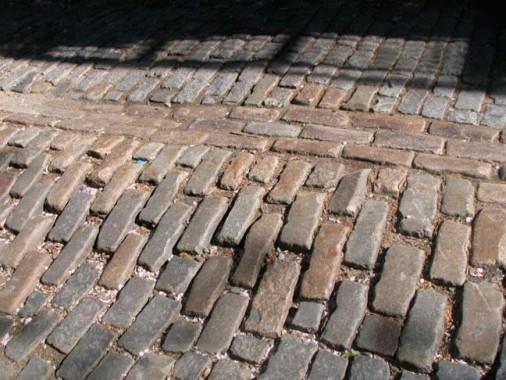 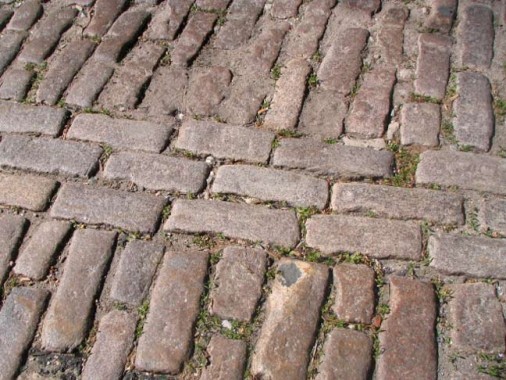 Charles Lane’s brick pavement is laid out horizontally with 3 rows of vertically paved bricks in the middle. This was probably done to aid drainage to the gutter on West Street. 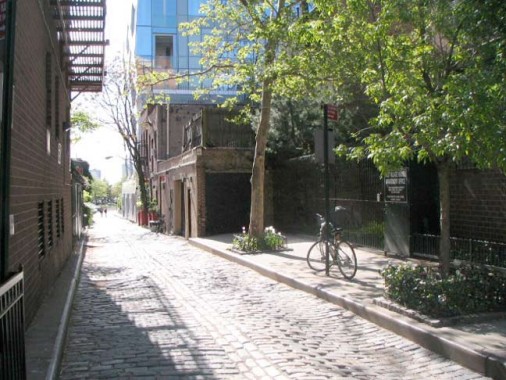 A 2012 view. The same brick structures on the right appear in the Abbott photo. 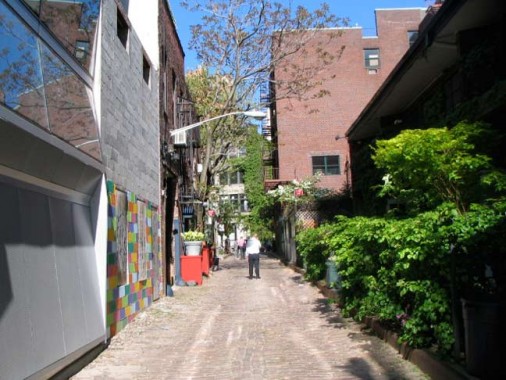 Looking east from about twenty feet from West Street. The buildings on the right are part of the 1974 West Village Houses complex. 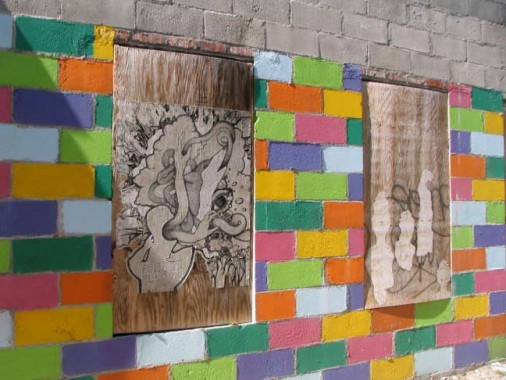 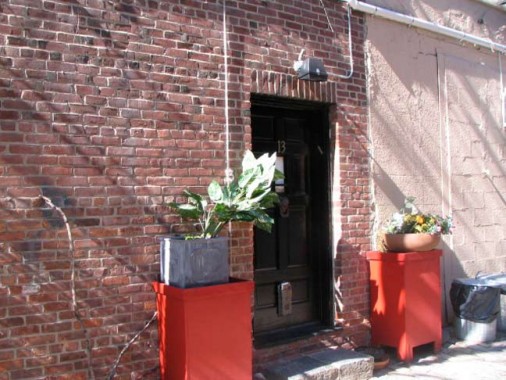 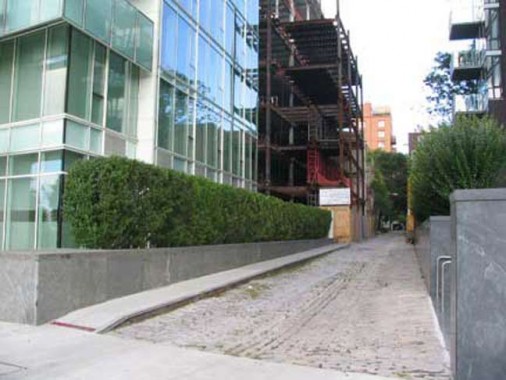 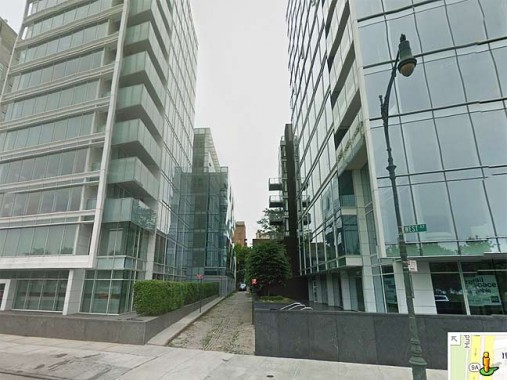 The west end of Charles Lane was irrevocably altered in 2002 and again in 2006 when this pair of Richard Meier-designed glass front apartment houses arrived. The narrow brick width of Charles Lane between the two buildings is a little bit of 1820 in the midst of a whole lotta 21st Century.

Charles Lane is not to be confused with the journalist or the longtime character actor.

When I moved to the area in 1971, a man gave pony rides to neighborhood kids in a corral at Charles Lane and Washington Street, now West Village Houses.

Wow – I had totally forgotten that – but growing up on Charles Street farther up near 7th and Greenwich, we used to walk down to the river and ride those ponies in the early 70s. Thanks for the reminder!

Ain’t it neat how the city layers history upon history?

There was a rehearsal studio in the 1980’s – I think it was called Charle Lane Studios- where my band used to rehearse. We used to see the B-52’s there sometimes.

used to go there on Fri nights with friends and jam. i remember Cliff used to be like the manager

Steve. I was a very good friend of Mike and Cliff. Great memories of that time. Good to hear someone still thinks of them.

Yep my band rehearsed there also back in the 70s and infact Richie Havens had an apartment studio in the same building.in addition Leslie West and Mountain recorded the Flowers album there and the cover of the album was shot right outside of that studio against the building wall!

Good to hear from so many that remember Mike and Cliff and all that went on at Charles Lane Studios. Knew Mike since he was a teenager in NJ. A wo earful man and I miss him very much.

How wonderful to hear someone who remembers Charles Lane Studios. My very good friend Mike Lynch was the owner and his friend Cliff Petrol helped manage it. I have many memories from that time and place.

Hello Jean… Tom W here, Mike’s nephew. Just getting a bit
sentimental looking down the street where I loved visiting my
Uncle. Miss him very much too. I’m 61 now, boy how time flies. Are you still in NJ?

And I always thought the original newgate prison was in London

Nor is the baseball player Houston Street to be confused with his namesake. For one thing, he’s actually “Huston” Street, spelled THAT way. But I always like to have fun with the idea that, if he were traded to the Mets, he’d have to pronounce his name “Howe Stun”

Patti: Yes! It was called Charles Lane Studios. It was co-owned by Leslie West, the guitarist for the 60s/70s rock group Mountain. A band I was in also rehearsed there, in the late 70s, and Mr. West sometimes came into the studio while we were playing. (We were playing progressive rock – Genesis, Yes, et al.) It was quite a time! Thanks for the trip down Charles (Memory) Lane!

The place that had the pony rides also had a crew of other animals living there – goats, etc. The place was called The Pony Foundation by locals. I grew up on Perry Street during the 60s and 70s. There also used to be some sort of metaphysical study center in one of the small houses on Charles Lane.

I used to rehearse at Charles Lane Studios 7 Charles Lane with Richie Havens, my own bands and others! Great memories!

I’m an Amos family researcher currently working on what I believe will be a book on Richard Amos. The Charles Christopher Amos street naming theory is a great story, but it’s only that. The only Charles Amos in the family was born in 1804 and Charles Street was called out by name in Richard Amos’ 1796 land survey that’s on file at the Museum of the City of New York (you can view it here: https://collections.mcny.org/Collection/Map-of-Mr.-Richard-Amos'-Lands,-lying-on-the-east-side-of-the-State-Prison-in-the-%5b…%5dth-Ward-of-New-York-2F3XC5U9MZR5.html )

I actually know who Charles Street was named after (it will be in the book), and he was not an Amos.

The 1790 Federal Census shows only two male Amoses in “the Outward of New York” (read: Greenwich Village) at the time: Richard and John Amos. No Charles. No Christopher. A woman simply recorded as “the Widow Amos” is also living on land on the northern boundary of what would become known as “the Amos Farm” when Richard bought it in 1796.