There had indeed been a Lexington Avenue Line in Brooklyn — an el that shrouded the entire length of the Bedford-Stuyvesant avenue that runs from Grand Avenue east to Broadway. 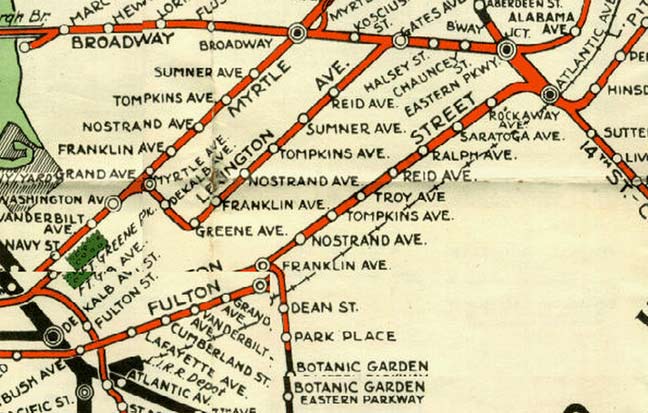 Seen on this 1920s map, the Lexington el split from the Myrtle Avenue El at Grand Avenue and then ran south and east, over Grand and then turning at Grand and heading to another connection with the Myrtle.

In the chronology of Brooklyn els, though, the Myrtle was a Johnny-come-lately, opening for business in 1888. The Lex had preceded it by three years, running Forney steam engines from its original termini at Washington and York Streets to Gates Avenue beginning May 13, 1885.

On the map, it’s the golden age of Brooklyn els — every heavy red line is an el, as the Broadway, Myrtle Avenue, Lexington Avenue, and Fulton Street els, as well as the 14th St-Canarsie, which runs as an el in East New York, were in their prime. Today only the Broadway remains.

By 1950, ridership had dwindled because of the nearby Myrtle Avenue el and the underground IND GG line subway under Lafayette Avenue, and the el was closed and dismantled. Do any traces exist? 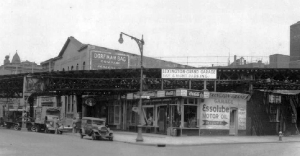 [For full-size image, click on the above Gallery. Photo courtesy Cyril Warren]

Here, the el makes the curve at Grand and Lexington Avenues. Note that it’s supported on a low garage-type building on Lexington, with a corner store. Notice also the “Essolube” and “Garage” signs on the corner. 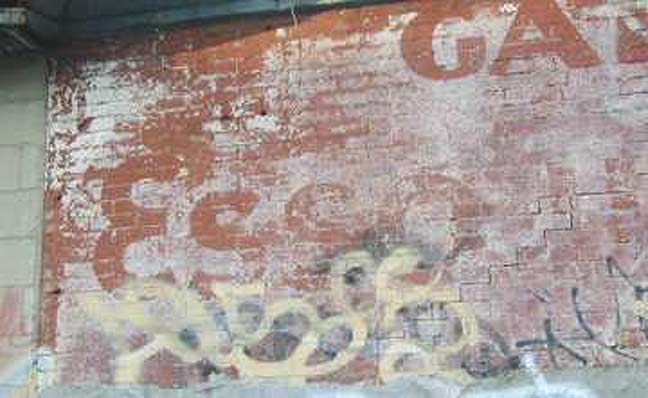 When I went past the corner around 2000, I noted the “Esso” and “GARAGE” painted signs were hanging on, barely… 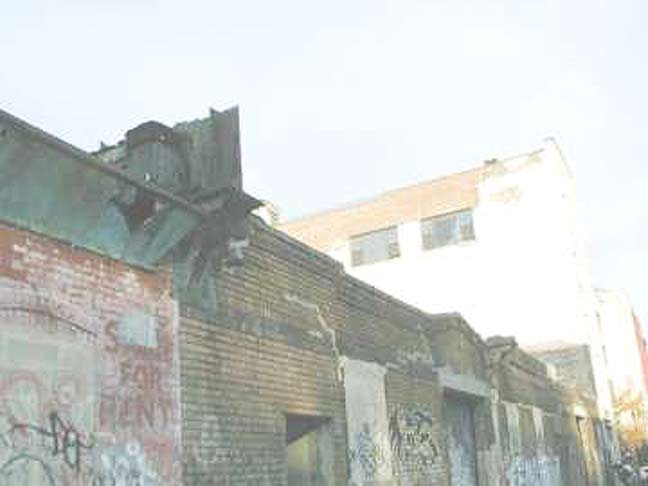 … as were the brackets that used to support the elevated on the garage building. That “STORE FOR RENT” sign can also be seen on the older photo. 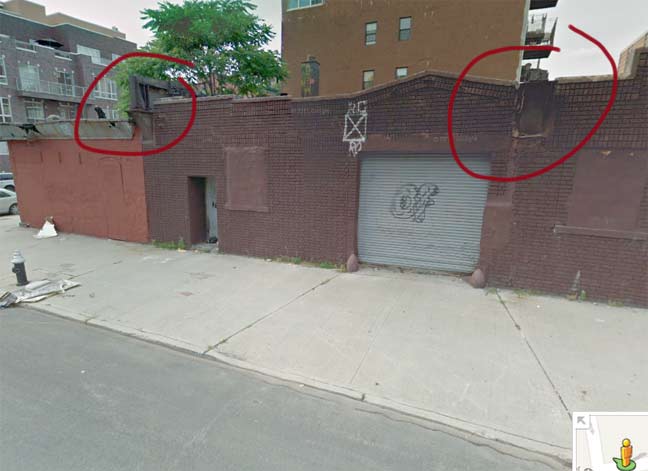 I haven’t been over to that corner for awhile, but with the magic of the Google Photo Truck I can see what it looks like as of 2011. The old painted signs are long gone, but two brackets that supported the el are still in place!

… that is, they were, until the building was demolished in 2013.

Bad news! I live around the corner from this and a little while ago a fence went up around this building. I’m afraid they’re going to be taking it down to build new condos or something!

There goes the last of the Lex. Very few know about it but me.

But thanks to you we all do now.

Blame it on the X painted on the garage- building was deemed hazardous, it was only a matter of time before the place had to be demolished for safety concerns

Yep – they tore the facade of that building down as of last week. Can’t say I miss it much as it’s been boarded up and dark at night

Were you able to get a piece of it a spike a brick .a piece of steel .oe even a piece of coal thats what they pored between tge beems

I wonder if those brackets just “hang” on the building, or if they are attached internally to a stanchion or supporting wall inside the building. Both seem to be at the intersecting point of two buildings, so?

Now that there’s a fence up, I guess we’ll never know.

Unless I get over there quick, I won’t know.

There would have to be something below them so that the weight of the trains would be transmitted directly to the ground, wouldn’t there? Otherwise, the building(s) would need to be a lot stronger than it/they otherwise would be. But I am wondering what the contractual relationship was between the BRT/BMT and the builders and/or owners of the building(s). Some kind of easement would have had to be granted to the transit company, so that they could be assured of the continuing right to run the trains there. Presumably, they paid the building owner(s) to acquire this, and it was all negotiated and arranged between them as private parties.

“I wonder if those brackets just “hang” on the building, or if they are attached internally to a stanchion or supporting wall inside the building. Both seem to be at the intersecting point of two buildings, so? Now that there’s a fence up, I guess we’ll never know.”

Those brackets should be part of the pillars that held up the structure from the street. The el did cut a corner and the pillars remained after the rest of the el was demolished. The building was built around the pillars.

My personal confusion aside, I do wish they had kept the BMT Myrtle Avenue Line to Jay Street up, and the BMT Lexington Avenue Line up.

The Myrtle Avenue Line would’ve been, today, an important crosstown-connection between Middle Village, Ridgewood, and Glendale to Brooklyn; unlike the G Train which just connects the two downtown centers of Long Island City and Downtown Brooklyn, the Myrtle Avenue Line connected a lot of communities; once the infrastructure is torn down, it’ll cost money to put it back up again; money that rarely ever materializes; it’s not worth paying to build it again.

The BMT Lexington Avenue Line is sorely missed in Bedford-Stuyvesant; while the edges of the neighborhood have subway service from either IND Fulton Street, IND Crosstown, and BMT Jamaica Lines, the middle of the neighborhood is quite a long walk from these lines; the Lexington Avenue Line, even acting as a shuttle, would have been a boon to residents facing such a long walk; a connection to the BMT Myrtle Avenue Line would have been a particular help to transfers in downtown Brooklyn.

The garage may have been built after the EL was up

If you “Bing Maps Birdseye view” it, you can see only the front smaller buiulding has the fallen in roof.

[…] the weekend, Forgotten New York took a loving look at the elevated trains that used to crisscross Brooklyn; most ran through the […]

If you go by now you can see more of the el train supports revealed…But don’t wait too long.

Went by today and the old supports are fully visible– no building left. I got some snaps, let me know if you’d like me to send them in. If you want to get some yourself, I’d hurry up!

Here’s a video I shot of them taking down the old trusses. This is truly the last we’ll ever see of the Lexington Ave line: http://www.youtube.com/watch?v=NI4UWFDeS54&feature=plcp

Jesse, thanks for filming that! To think those supports went up in 1885, 127 years ago.

In the 1940’s I lives on Lewis Ave at Lexington Ave. Spent many a day watching the old Lex rumble by. A lot of memories.

In the spring of 1950, a friend of mine and I decided to ride the whole NY city subway and elevated system. the most interesting parts that I still remember were the Lexington Ave EL(Brkln) and the Dyre Ave line (Brx) Both lines had Brooklyn end gate cars. The Dyre Ave line did not have fare controlled stations. (you could just walk on to the station platforms without paying a fare). Instead a conductor with bus type fare box rode on the platform of one of the gate cars coupled back to back in the two car train. You put your dime into the fare box as you got on.
The Lexington El cars were also end-gated cars. When we rode in the early spring, the side windows were open. T^he seats had reversible backs so that you could always sit facing forward.

I live on Lexington ave, I never knew about the El here. I do remember the L train on myrtle and bway. This is good trivia

I remember the el at Grand & Lexington as it made the turn onto Lexington ave. I used to take my son on the myrtle ave el just for amusement back when we lived in the Marcy Projects. The whole experience was great fun.

My Dad worked for old Board of Transportation on the old BMT Myrtle Ave line. So we got to ride on the front platform of the last train to run on the Lexington Ave line. It was early Fall (September?) I think and it was bitter cold. It was a big deal for a 5 or 6 year old as the run was at about 11:00 PM.