Continuing a recent concentration on Hunters Point that I have been indulging, in the spring of 2011 I was idling in the southern end  of the neighborhood near Newtown Creek and wandered down the southern bit of Vernon Boulevard, a major road that runs along the western Queens coast from Astoria south to HP. When Queens streets were numbered in the 1920s, it might well have been renamed 1st Street; instead, it merely had its designation upgraded from Avenue to Boulevard, as happened with other long Queens roads at the time.

South of Borden Avenue, Vernon Boulevard is cut off by the tracks of the Long Island City trainyard from a one-block section between 53rd and 54th Avenue. When I first saw the area in the 1980s, it was possible to simply walk over the unelectrified tracks to the southern piece of Vernon Boulevard, but security has become tighter since then, and the trainyard is fenced off. The stub is now accessible by walking over the tracks at 11th Street under the Pulaski Bridge. 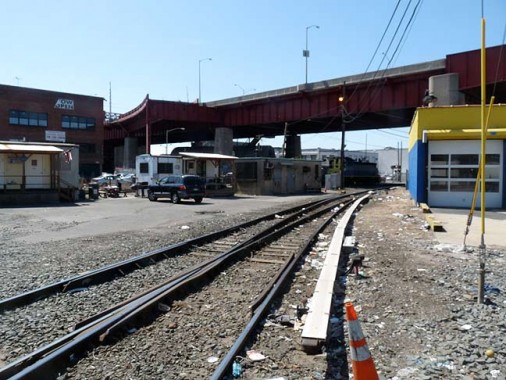 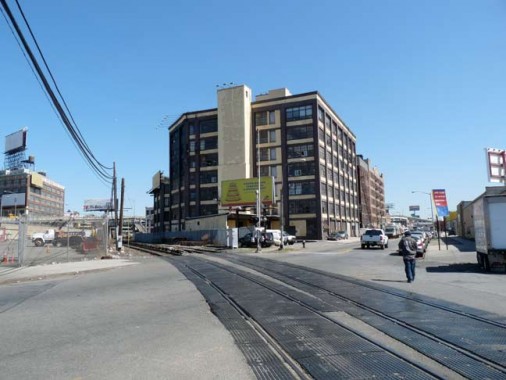 Before doing that I snapped one of Queens’ few remaining grade crossings, at Borden east of the Pulaski. Long Island Rail Road trains originating at Long Island City use the tracks to arrive at the Hunters Point station as well as to access the Sunnyside Yards. Other grade crossings in Queens can be found at 88th Street in Glendale and over Little Neck Parkway near the Nassau line. 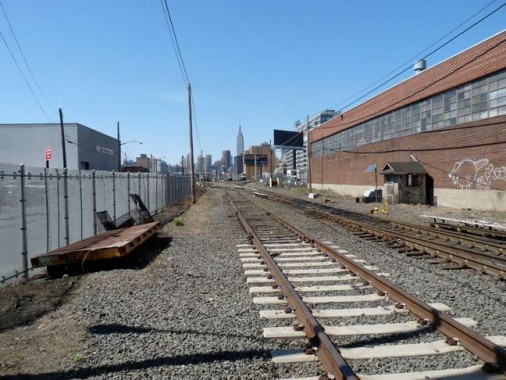 Photographed at 11th Street looking east toward the LIC yard as well as midtown Manhattan, where the King of All Buildings dispassionately surveys all. 53rd Avenue is on the left. 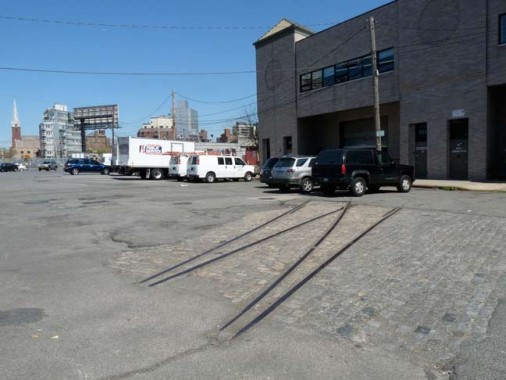 Vernon Boulevard. What appear to be trolley tracks were actuallly part of an intermodal railroad that connected manufacturing lofts, when there was much more in the way of industry along Newtown Creek. 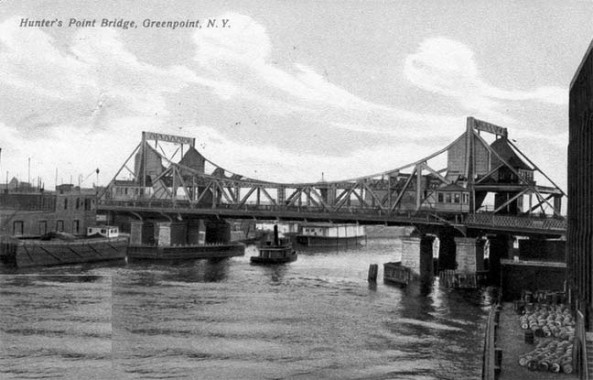 The Vernon Boulevard Bridge, also called the Hunters Point Bridge, crossed Newtown Creek connecting Vernon Boulevard with Manhattan Avenue in Greenpoint, Brooklyn. It was subsequently replaced by the Pulaski Bridge (between 11th Street and McGuinness Boulevard) in 1954, and today its only trace is Vernon Boulevard’s exceptional width south of 50th Avenue and the tracks, which accommodated the on/off ramp. 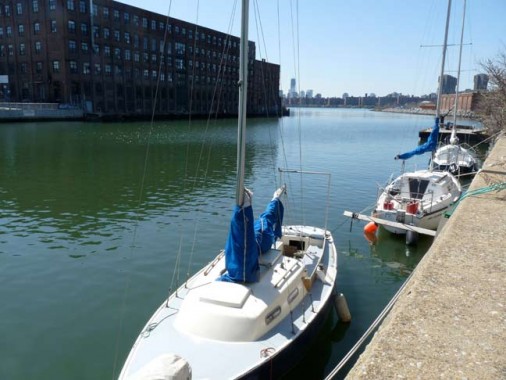 Recreational vehicles are docked along Newtown Creek,  the waterway that separates the political boundary of the boroughs Brooklyn and Queens, which also share the longest on-land boundary of any two boroughs. It derives its name from New Town (Nieuwe Stad), which was the name for the Dutch and British settlement in what is now Elmhurst, Queens. Channelization made it one of the most heavily used bodies of water in the Port of New York and New Jersey and thus one of the most polluted industrial sites in America, containing years of discarded toxins, an estimated 30 million US gallons of spilled oil, and raw sewage from New York City’s sewer system. Newtown Creek was proposed as a potential Superfund site in September 2009, and received that designation on September 27, 2010. wikipedia

Many friends, such as Newtown Penticler Mitch Waxman, are involved with the Newtown Creek Alliance, an organization whose aim is to clean, revitalize and restore this key waterway. 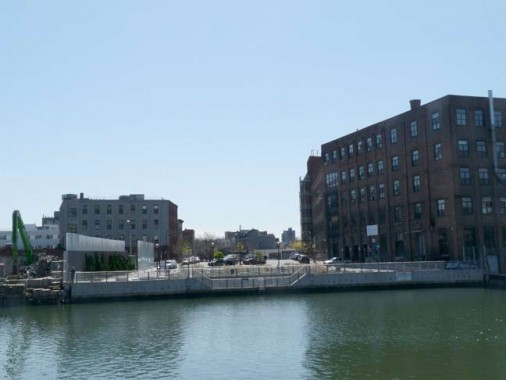 Manhattan Avenue in Greenpoint, as seen across Newtown Creek from Vernon Boulevard. The 5-story building on the right is the Greenpoint Manufacturing and Design Center, which since 1992 has been home to small manufacturing enterprises, artisans and artists. The building was built in 1892 and is one of a number of Greenpoint structures formerly associated with the Rockefellers’ Standard Oil — it was originally a rope factory. 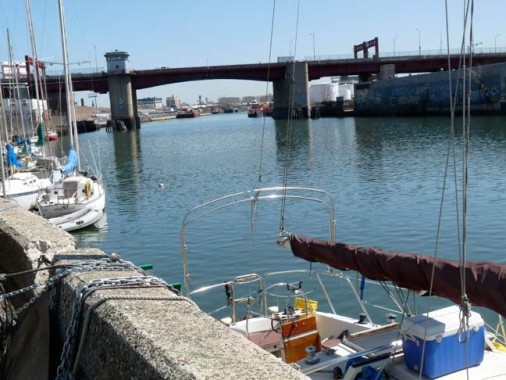 Looking east on the Creek we see the Pulaski Bridge, one of two bridges named for Polish national heroes and military commanders, the other being the Kosciuszko Bridge. Count Casimir Pulaski battled Russian domination in his home country and aided the Americans during the Revolutionary War. For much of the 20th and into the 21st Century, Greenpoint and Newtown (and its descendant neighborhoods Maspeth, Glendale and Elmhurst) have been home to Polish immigrants. 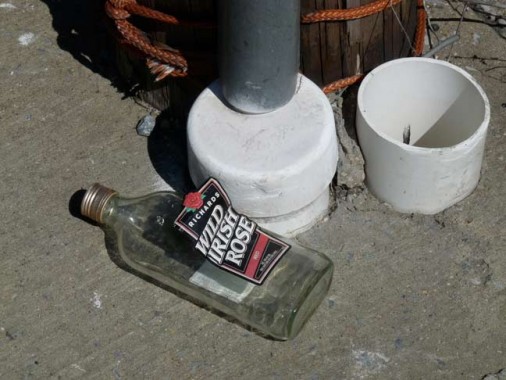 Other idlers have preceded me to this spot. Richards Wild Irish Rose is an alcoholic beverage produced by Centerra Wine Company, which is part of the Constellation Brands organization. It was introduced in 1954 (by coincidence, the Pulaski Bridge was introduced the same year) and currently sells about two million cases annually. The brand is available in 13.9% and 18% alcohol by volume.

The name was inspired by the 1899 song written by Chancellor Chauncey Olcott and performed on vaudeville stages. 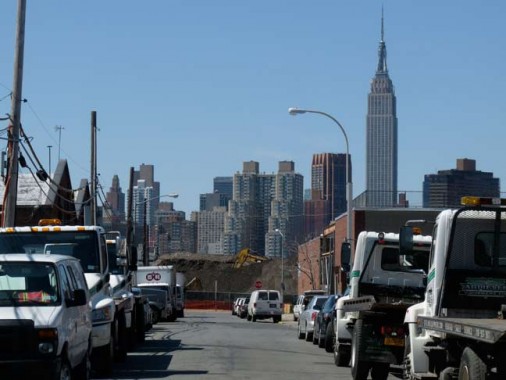 Does the King of All Buildings loom greater in the five boroughs than it does over western Queens? Looking west on 54th Avenue. 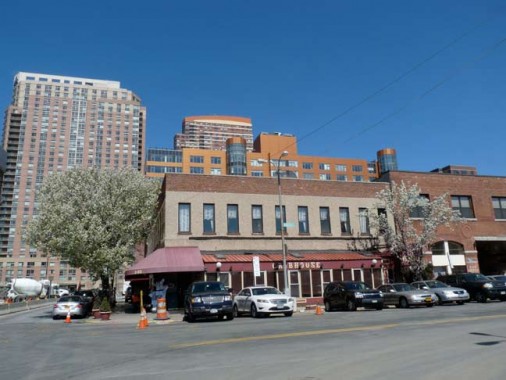 Whether or not I am entering, I am always drawn like metal shavings to a magnet to Miller’s Hotel, now called the Waterfront Crabhouse. Read about it on this FNY page.

The iconic watering hole suffered extensive damage from Hurricane Sandy, and will require several months of repair during 2012 and 2013.

Love your posts, but what has Thomas Jefferson got to do with Mount Vernon?

[…] Erik Baard, who interviewed Jane Jacobs in the 9/11 aftermath, greeted the crowd that arrived at the end of Vernon Boulevard, where a bridge once spanned the Newtown Creek to Manhattan Avenue, Brooklyn. […]