On 182nd Street just north of 73rd Avenue you will see what appears to be a weedy, empty lot, with ivy and ancient trees. This, though, is the cemetery of one of the farming families in the area, the Brinckerhoffs; there are 76 plots here dating from between 1736 and 1872. The tombstones have been long ago stolen or are buried underground.

In the summer of 2012, the Brinckerhoff Cemetery was designated a landmark, ending a multi-decade tug of war between preservationists and developers hoping to build atop the cemetery.

Long before there were any cemeteries or tombstone makers, Long Island settlers  were faced with death and the need for burial. The earliest solution was to fence off a corner of the family farm and make it into a private burying ground. There were many such plots in Queens once, but the break-up of old farms into housing developments and the cutting of streets through estates either destroyed the grounds or left them isolated and exposed to vandalism and neglect. Today only a handful remain… The earliest burials in Queens date from the early 1700s. Since there were no stonecutters at such an early date, the families had to use crude fieldstones in their natural shape. The initials of the deceased, his or her age, and sometimes a year were chiseled into the stone and that was all. By 1720 native stonecutters had become numerous…

The Brinckerhoff family arrived in New Netherland in the 1630s and had acquired land in what would be Fresh Meadows by 1730, and the family cemetery was instituted near the farm shortly after. 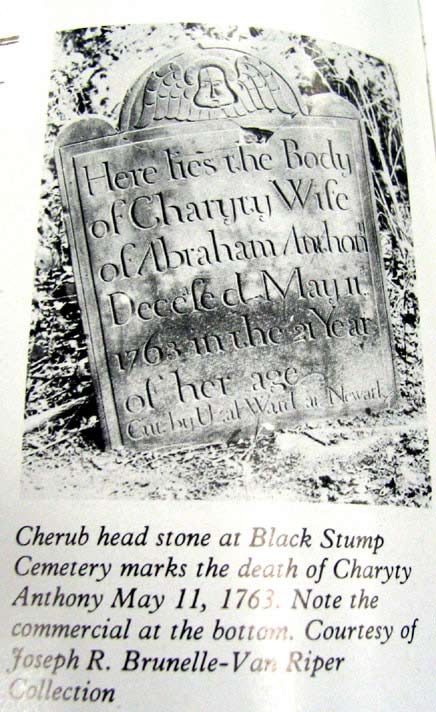 The earliest known grave marker in this burial ground, inscribed “R.A.” with the date 1730, is believed to be the grave of Rem Adriance, owner of a farm some distance to the east and married to Sarah Brinckerhoff; several of their descendants are also buried here. Dirck Brinckerhoff’s first wife, Aeltje Couwehoven Brinckerhoff, is buried here – she is the only known person with an inscribed gravestone from a family who actually owned one of the two farms containing the burial ground. Charyty Anthony, also buried here, was presumably a relative of Elizabeth Anthony, Dirck Brinckerhoff’s second wife. LPC

The history of the Brinckerhoff far, and associated properties is a complicated one, related in the LPC report linked above. The cemetery was in active use until he late 1800s. Though surrounding properties changed hands often in the early 20th Century the cemetery and neighboring Brinckerhoff homestead were always excepted.

The cemetery was subject to frequent vandalism and the homestead was demolished in 1934. The cemetery property was transferred to the city to the DeDomenico family in the 1960s, which sold it to Linda’s CAI Trading in 2010. No gravestones are currently visible in the cemetery but some may remain underground.

as usual, an interesting post by Forgotten-ny! Its a shame that the cemetery was allowed by the locals etc to fade away to its current condition. Besides, who would build anything on this site knowing its a cemetery? (hint-the movie ‘Poltergist’ (sp?) comes to mind!)

Vin Seyfreid was a really great historian. I got to know him fairly well through our membership in the Association of Public Historians of NY State . He gave a few talks about trolley cars on long island to the Floral Park Historical Society, and donated to them the bound hard copies of a local Floral Park newspaper from the 1920s he had saved when they were being discarded by a library in Queens . He had these and many other bound volumes of newspapers for various communities in the basement of his house. Over a decade ago he was thrilled that my then, very young son was so interested in Egyptology which was another one of his interests . When he moved from his home in Garden City he called me up and told me to come visit and to be sure to drive over in my pre war Packard sedan. He then proceeded to give me a cast brass light fixture that he said came from the ceiling of one of the first electric trains ever used by the LIRR, he said ” as a token of friendship”. I was in shock, and treasure that fixture to this day.

Dear Walt:
I’m pretty sure that you’ve written for or have been written about in Hemmings Classic Car. Am I correct?

i would love to see this cemetery restored; i am a descendent of this family

Glad to see this was designated a landmark. I’ve read about it in the past. The transfer to the DeDomenico family was for a relatively low amount because of the knowledge of the cemetery on the grounds.

We lived on 193rd Street, between 73rd and 75th Avenues. Never knew about the cemetery. I remember a farm on 73rd Avenue, between the Fresh Meadows houses and PS26. Was that farm owned by the Brinckerhoff family?

That was the Klein farm which operated for decades until about 2000.

Hi. I know this is in Fresh Meadows, sorry for the placement. But i was wondering if you knew the name of the farm in the 1950s in the back of P S 218 on main street,Kew Gardens? nay info on it?

The Friends of Brinckerhoff Colonial Cemetery Inc. is a duly registered non-profit organization with 501-C-3 , as approved by IRS on Sept. 17, 2014. The purpose of our organization is to purchase back the colonial cemetery from Le Dan Cai Trading Corp.; and to preserve, refurbish, and renovate, the decrepit state of the cemetery and enhance the historical values and education of our school children. With limited resources, our community volunteers continued to persevere , to preserve the historical legacy and heritage of the early Dutch settlers of Flushing. We are now requesting your financial support in our endeavor . You may send us your tax-deductible check donation to our mailing address at: 69-23 181st Street, Fresh Meadows, NY 11365. Thank you.
Yolanda delacruz-Gallagher – President

I’m a descendent of Joris Dircksen Brinckerhoff, who arrived in New Amsterdam in 1638 or 1641—the first Dutch settler bearing the name and the ancestor of just about anyone named Brinkerhoff. He was my grandfather x 9.

While I’ve followed this story off and on, I’m curious to know if any grave markers still exist and what research might be conducted with the requested funding to identify individual graves and their markers.

A book about Joris Brinckerhoff and his descendants (until the late 19th century) may be read online:
https://archive.org/details/familyofjorisdir00byubrin

During the extensive research done by the Fresh Meadows Homeowners Assn., Inc. in order to bring all related information to the Landmarks Commission re the Brinckerhoff Colonial Cemetery, we found a 1919 publication by The City of New York, Office of the President of the Borough of Queens entitled “Descriptions of Private and Family Cemeteries in the Borough of Queens” compiled by The Topographical Bureau, Charles U. Powell, C.E., Engineer in Charge. Page 34 shows the layout of the individual graves, page 35 is a list of the quality of the gravestones and inscriptions, and page 39 has listed many of the names, birth dates and burial dates of the individuals. In the 1940s we know the gravestones were still there. As soon as Friends of Brinckerhoff Colonial Cemetery is able to purchase the property, we will be then be able to go on the land, clear the overgrowth and debris, and provide a respectful and dignified resting place for those buried there.

I am a descendant of Dirck Brinckerhoff! My Grandfather was Harold Brinkerhoff! Thank you for preserving my ancestry! I will be visiting Queens this summer and will definitely visit this site! Notice my Grandfather’s (and mother’s maiden) name left out the C in Brinkerhoff! Brinckerhoff(k) genealogy is an interesting read! I am so Proud of my European ancestry!

i am a descendent of the brinkerhoff/ snedeker clan; there is a book from i think 1938 or maybe a bit earlier that has the cemetery graves identified in it; i got it out a while ago from the queens library in glen oaks, i believe. maybe jamaica? anyway, it exists. can’t remember the title…one day i will look for the page that has the identified graves on it since i copied it…

lynn, i too am a descendent of the snedekers/ brinkerhoffs; would love to see this cemetery restored.

I am a descendant of Joris Brinckerhoff. My dad was Harold Lewis Brinkerhoff, dad lived 100 years 2 months. It is sad that New York City didn’t keep better control of these ancient cemeteries. I have been doing Ancestry now for several years, I now know that both of my parent’s are descendants of Royalty.

My wife’s side of the family has Brinckerhoffs as well. We have boxes of correspondence from the family from the 1700s to the 1880s, even a book owned by the original Joris from the mid 1600s. Any family members looking to do ancestry research, feel free to contact me at natick169@gmail.com. Many of the newer letters (post 1800) are addressed to Fishkill, Poughkeepsie, and Brinckerhoff NY addresses. Also there are letters from affiliated families (Hunter/Armstrong/Clapp).

The cemetery was bulldozed in the 1930s–a friend’s mother grew up in Fresh Meadows (181st / 75th Ave. to be exact), and witnessed the destruction of the cemetery. She is 90 years old now, and still talks about the day she saw the bulldozer(s) plow the gravestones down. She was heartbroken as she used to play in the cemetery when she was a young girl, especially near the grave of “Mary Unger,” and considered her a “friend”. She wrote up an account of her experience, and I sent it to the Queens historical society; it is a great primary resource.