The Clinton Diner, at 58th Street and Maspeth Avenue in an otherwise godforsaken section of western Queens, is one of a vanishing breed of roadside diners, catering to workers in an industrial area and motorists who are passing through. It stands next to freight tracks of the Long Island Rail Road. The now dismantled Richard Upjohn 1847 masterpiece, St. Saviour’s Church, was just a couple of blocks south until the mid-2000s. DeWitt Clinton’s mansion, for which the diner is named, stood nearby until 1933. A house belonging to family members of mid-19th Century Maspeth mover and shaker James Maurice is across the street. Community meetings take place here, and it has been used on numerous occasions for movie and TV shoots when a scene needs authenticity.

But undoubtedly the Diner’s Number One claim to fame… 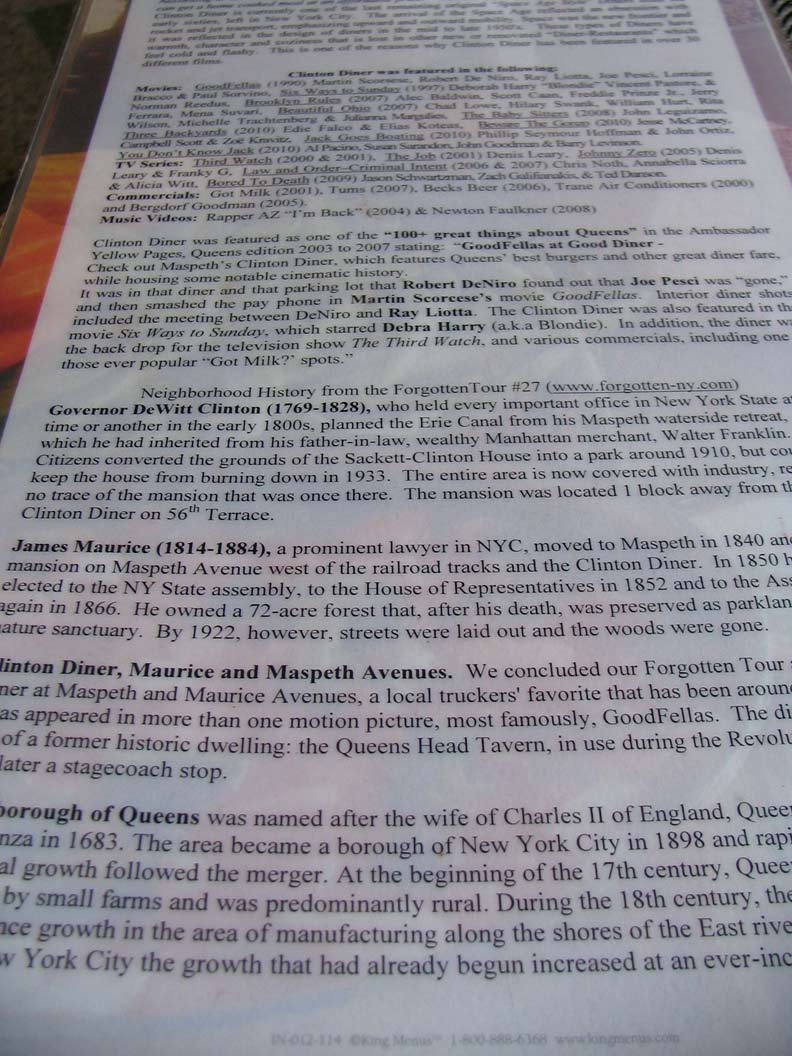 …is that it includes voluminous notes from Forgotten New York on its menu.

So nice to see a Queens diner that has survived. There was a really nice one on the corner of Springfield Blvd. & Union Turnpike that folded in the late “90’s. It’s an office building now. After the turn of the century the diners started to disappear in greater numbers: The Palace, Scobee, Seville, Future. Only the memories remain. When I relocated to Arizona in 2005 I discovered the Mt. Athos Diner in nearby Florence. The late owner, George, who passed away in 2011, had owned a diner in Whitestone. He very proudly told me that he “imported” his pastrami from Brooklyn. The menu is pure Queens/Greek diner. Mt. Athos survives with his son behind the counter. How ironic that the kind of diner I knew & loved in Queens has a better chance of prospering in AZ than NYC.

Great Place the Clinton is. I hope it stays that way. Speaking of diners, does anyone remember the name of the diner that was at the corner of 59th Ave. & Queens Blvd? It was a small place and probably was torn down around 1972-73 to make room for new stores.

Yes it was the Georgaia Diner

Georgia’s is still there and still good.

Godforsakened? Hey people, I live in Texas and believe me I’ve seen and lived in small town godforsaken and I know godforsaken when I see it. A place in NYC godforsaken? So I went to Google maps and got a street level view of the diner and neighborhood. Yup, pretty much industrial nothingness! So you’re right godforsaken. Good call.

The Clinton was recently seen in “Over/Under” starring Steve Pasquale on the USA Network.

The Deerhead was turned into an electrical supply store and now is a Dry cleaners. *sigh* I do miss their Corned Beef Hash and Eggs…

Is there a decent Diner left on Union Turnpike? The Hilltop was AWFUL the last time I was there…

Best diner I have found recently is waay out at the end of the Northern State at Rt 347 on the way to Stony Brook Univ.

Re Deerhead and Buccaneer diners, there were originally three at that location, which was mysterious until you remember that Astoria Blvd. and 94th street was a crucial junction in the days when LaGuardia was the only airport in NYC. As a kid, I used to wonder how three diners could survive at one intersection, and now we know the answer. I believe (????) the third was the Wagon Wheel or Red Wagon Wheel. Another local person may know.
Another “disappeared ” diner was the one on Astoria Blvd and Steinway, which became a sports medicine office. Not sure if it is still there. If so, you can see the diner outline despite the change in business.

My grandfather used to take me to the Clinton Diner for breakfast in the early 1970’s (when I was 5-8 years old) after he dropped my mother off at her bus stop to go to work.
As I got older (12-years old or so) I used to take my Mongoose bicycle to the Clinton Diner area on weekends which I thought was cool because all the businesses were closed in the industrial area. It almost seemed like a deserted town on weekends, especially on Sundays! I’ve been a Maspeth resident since I was born in ’67. This is a great little town.