I have been renewing my relationship with alleys during 2012 and into 2013. I photographed most of the Manhattan alleys I knew about at the Dawn of Forgotten New York back in 1998, and didn’t return, thinking my work there had been done. But for me alleys have an attraction that is hard to resist. Other northeast large towns such as Boston and Philly have dozens, hundreds, of named alleys and dead ends that go nowhere, but New York City has lost many. Part of it is because Manhattan is an island, and a small one at that, so real estate is precious and many former thoroughfares have been paved over, built upon, and “forgotten” about.

This week, I wandered down Collister Street, which runs north for two blocks from Beach to Laight Streets between Greenwich and Hudson. According to the NYC Landmarks Tribeca West designation report, the street was laid out in 1808 and is a twin of St. John’s Lane, which runs between Beach and Laight just east of Varick Street. The short streets provided rear access to elegant townhouses that once faced St. John’s Park, which used to be in the location now occupied by the exit ramps of the Holland Tunnel.

A great many streets in lower Manhattan are associated with the historic Trinity Church, named for church officials, sextons (caretakers), clergymen, etc. As a kid (yes, I knew of Collister Street’s existence as a small child because I pored over maps in my spare time) I always associated the street with kitchen metal straining devices, but that’s colander. Collister Street is named for Thomas Collister, who was Trinity Church sexton from 1790-1816.

Though it’s only two blocks long and has no addresses on it that don’t front on any of its 3 cross streets, Collister Street is included in two landmarked districts, Tribeca West and Tribeca North. 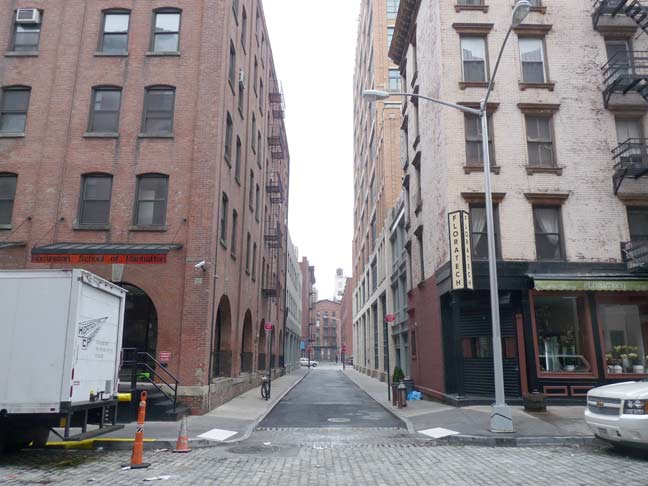 Collister Street looking north from Beach Street. Recent construction on the street, and the replacement of a couple of lampposts, have left the street unmarked except for a single sign at Laight Street, on the north end. I suspect replacement signs are on the way. 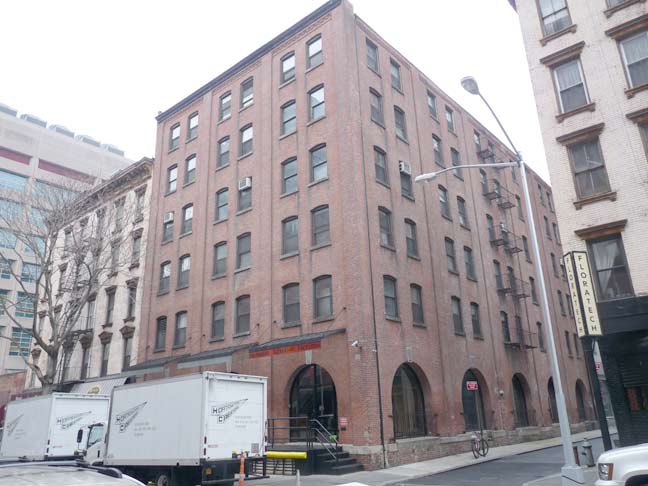 This 6-story building on the NW corner of Beach and Collister was built in 1885 [Oscar Teale, architect]. It had always been a warehouse but has since been converted to residential use. 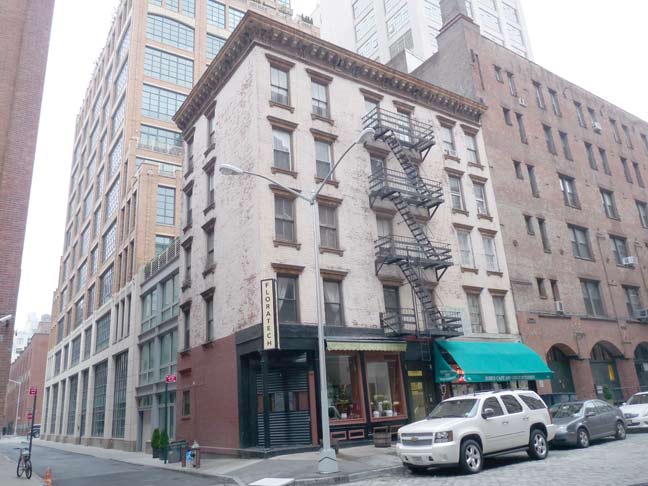 This 5-story tenement was constructed in 1870 [Robert Mook, architect]. For the past several years a florist has been located in the retail space on the ground floor. It still bears some traces of Italianate design, especially in the roof corbelling. 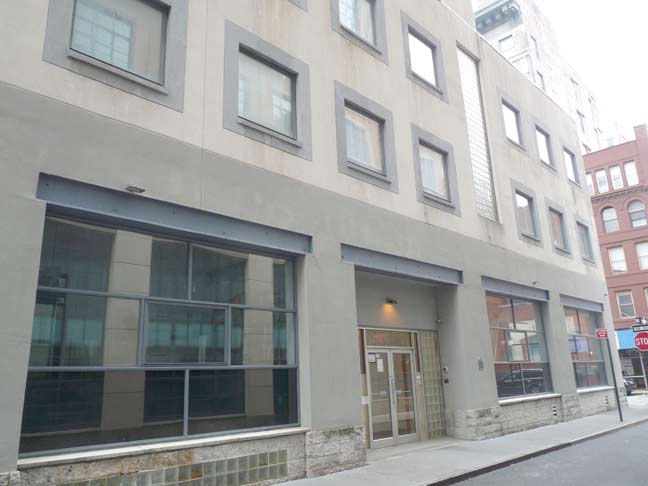 11 Hubert Street, which has an entrance on Collister, was redesigned about 2 years ago by architect Winka Dubbeldam. It was originally a garage designed by Dietrick Wortmann and built in 1946, making it a relative newcomer in Tribeca. 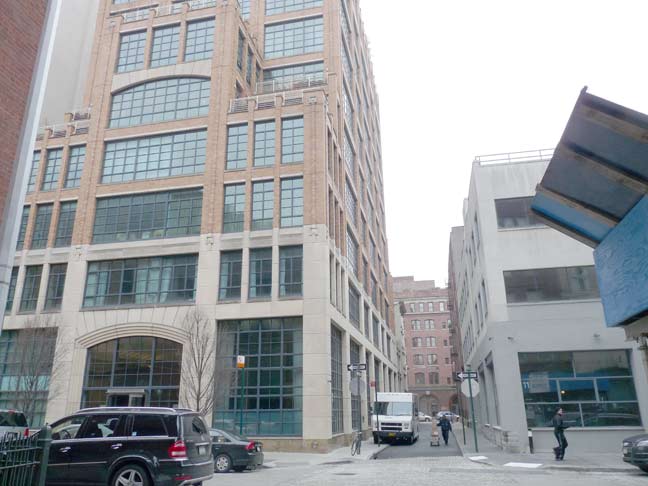 7 Hubert Street, on the SE corner of Collister and Hubert, is a high-rise apartment building constructed in 2003. Apartments in this building sell for between 2 and 15 million dollars. The space was previously occupied by a parking lot that had replaced mid-1800s offices of American Express (see below). On the right is the front side of 11 Hubert.

Curbed has some interior photos of the apartments. 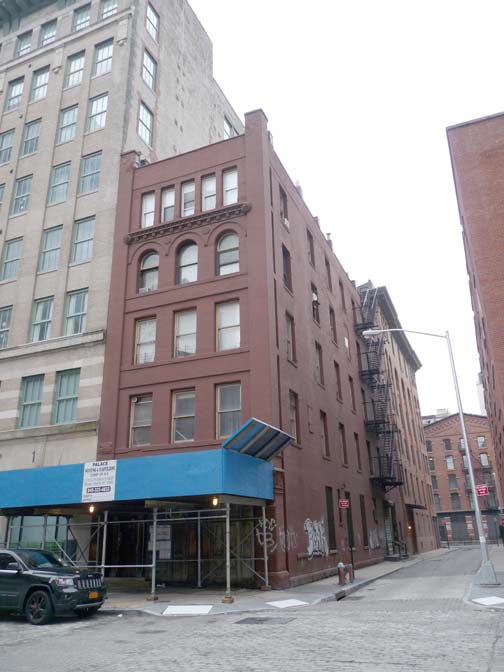 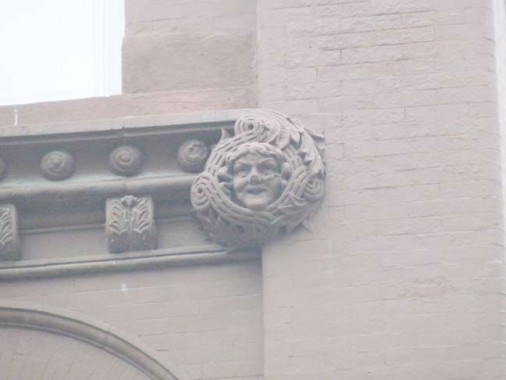 #10 Hubert Street, on the NW corner of Collister, has a surprise below the top floor: a secondary cornice with masklike figures at each end. The building went up in 1892 [Julius Kastner, architect] and was originally occupied by liquor merchant Joseph Bearns. It has a Romanesque design; notice the window treatments on the 4th and 5th floors differ from the first three. 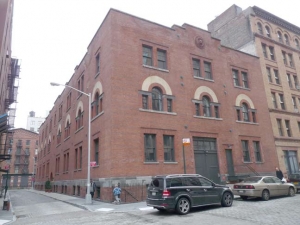 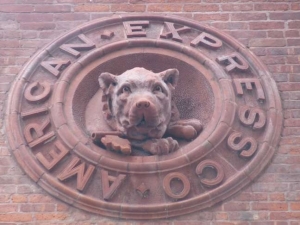 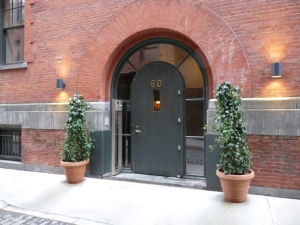 As stated above, the part of Tribeca in the area Collister Street runs through used to be one of the more exclusive parts of town. While high-rises like 7 Hubert’s apartments sell in the millions, the tower looks rather anodyne and bereft of any kind of joie de vivre. In the early-to-mid 1800s, townhouses sprung up along leafy lanes along St. John’s Park.

All that changed in 1867 when Trinity Church sold the park to the Hudson River Railroad, which proceded to build a new terminal in place of the park. American Express, whose original purpose was to facilitate the delivery of goods (much like Fed Ex does today) was founded in Buffalo in 1850 by Henry Wells and William G. Fargo (who founed Wells Fargo two years later) and made its headquarters on Hudson Street. The company constructed stables here on #4-8 Hubert Street in 1866, and it was extended through to Laight Street in 1898 by architect Edward Kimball. The building gained yet another extension in 1902 when a perpendicular section was added through to 157 Hudson Street.

Kimball added the American Express symbol in the late 19th Century, a bulldog holding a key. The first symbol to represent American Express was a white bulldog sitting on top of a freight trunk. The guard dog illustrated the company’s commitment to protecting the shipments of its customers. [Reference for Business] Later, building facades showed the bulldog with keys.

American Express had moved out of the building by 1913 and it later housed the American Railway Express Company and the First Machinery Corporation. By 2004 the building had become completely dilapidated, but found rescue from developer Peter Moore, who purchased the building and converted it to apartments which now sell beginning at 3 million dollars. I presume the building allows bulldogs. 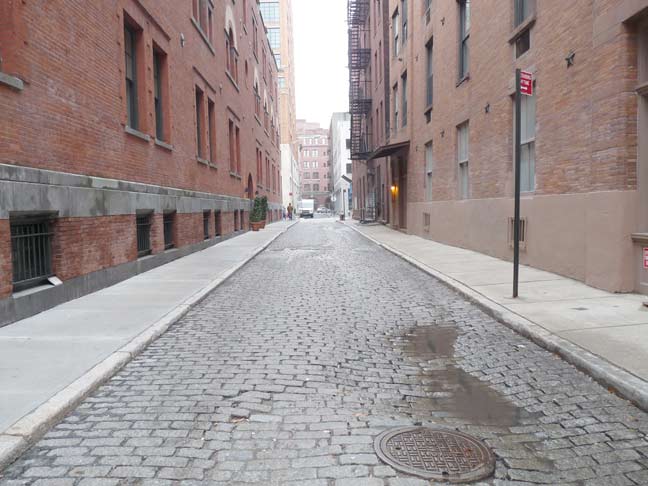 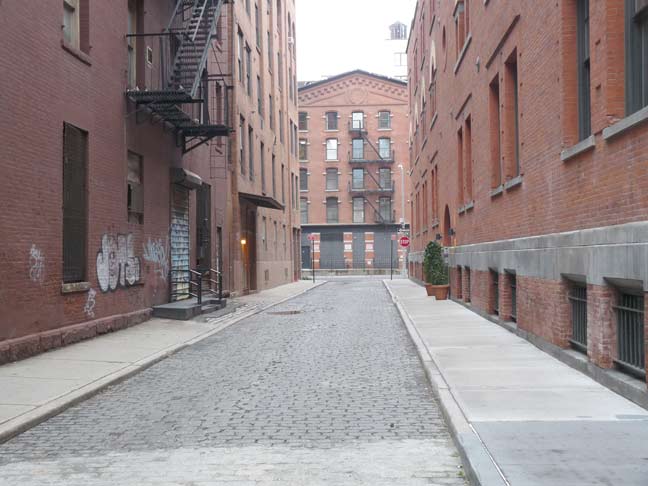 Collister Street looking south (top) and north to #54 Laight Street. In the summer of 1992 I worked briefly at Greenwich and Van Dam Streets and on lunch hour would wander south into Tribeca. This was just when the neighborhood was beginning to develop into a region of expensive apartments and chi-chi stores, a far cry from the former manufacturing and wholesaling neighborhood it always had been. I first noticed Collister Street then and it helped plant a kernel of an idea that had festered within for a long time, to chronicle and photograph the things left over from a past age before they evolve into mere phantasms.

According to the LPC, Collister Street received its Belgian block paving between Hubert and Laight in 1931.

54-56 Laight, with its distinctive pediment that frames the north end of Collister Street, was constructed for Henry Meyer’s ship chandlery (supplying) business in 1870 by architect George DaCunha. 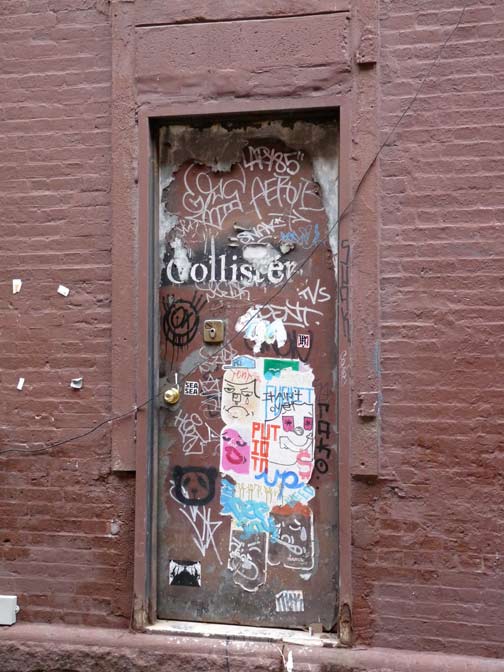 This side doorway to #10 Hubert has always had Collister Street’s name on it. 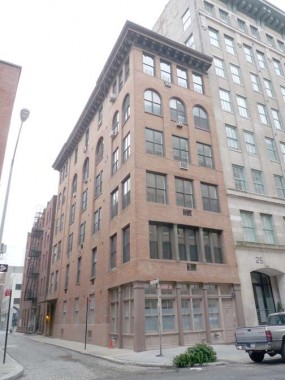 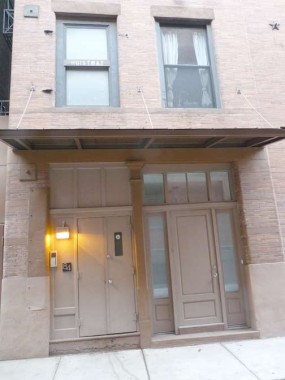 #57 Laight Street, on the SW corner of Collister, was developed and built by Horgan & Slattery in 1892. The window treatments are echoic of #10 Hubert, which was built the same year. The original tenant was the Denver Chemical Manufacturing Company, producers of antiphlogistine, “a popular product for the treatment of tough muscle pain, arthritic pains, rheumatic pains, bursitis, lumbago, etc.” according to wikipedia. It is still produced in Canada, though not available in the USA. Later, an importing firm and a paper warehouse occupied the building. Currently, it’s residential and there is a side entrance calling itself 84 Collister Street.

I wonder whether Staple Street once had a connection (running north south from Harrison to Duane). When you cited Horgan & Slattery I further wondered whether the old Slattery Plaza was named for the architectural partner. Any more info?

I am constantly amazed at your postings. Its one of the few things on Facebook that I actually look forward to. I grew up in Brooklyn and Queens but spent alot of time just roaming Manhattan with a friend starting as a 13 year old. These pictures just put me right back there. Of course we had no idea of the historic nature of things that you do. Keep ’em coming.
Bruce Romanoff

Collister street is seen in this video at the 6 second point http://www.youtube.com/watch?v=coIdsfMfI_8.

The site which 7 Hubert now occupies was a public school constructed in the 1880s, abandoned in the 1960s, and razed about 1975.

6 Hubert Street was home to one of the best dance clubs in NYC, The Shelter ! RIP http://en.wikipedia.org/wiki/The_Shelter_(New_York_City)

my goodness I remember. Did it then have promotions on Sunday’s during the day called Body and Soul. I believe the name was changed to Arch.

I used to live in Jersey City; and Collister Street was a great shortcut uptown for any wreckless driver in the know. I no longer live in New Jersey, but I believe when they started reconfiguring the exit traffic circle of the Holland Tunnel in the late 90’s, this short-cut no longer worked. Typical uptown traffic used to flow onto Hudson Street and you would have to cross the outbound tunnel traffic at canal. The quick way was to use the 2nd exit at Beach and make the quick right on Collister. At Laight you headed over to West Street and cut through the parking lot at the corner (there is a building at the corner today). Not advocating wreckless driving, but I managed to get to where I was going fast as a result of this short-cut and on a typical weeknight could shave 10-15 minutes off of a trip into Chelsea.

I like to cycle through different neighborhoods on the weekends and just came across Collister St. for the first time. When I got home I googled it to get more info. and was thrilled to reach this site. Thanks for a great job.

There is a major problem on Collister Street. The tenement building on the NE corner with the flowershop underneath, is putting open garbage cans (as you can see in your photos) on Collister Street, right outside the townhouse to the north of them. They actually drop garbage from their windows into these bins. There is always garbage on the sidewalk, and it looks disgusting and brings rodents. The family in the townhouse as well as the Nursery School across the street have complained to the city but nothing gets done because, as you point out, Collister is on the maps as a back alley not a street! What can be done to help with this?? Any advice is appreciated, thanks.

Horgan was my great grandfather,this is very cool to see details from afar.

[…] to Forgotten New York, AmEx moved out in 1913 and in moved the American Railway Express Company and then First Machinery […]

Back in the late 70s when I lived in the West Village and did a lot exploring of lower Manhattan on my bike, I discovered Collister and thought this is a perfect place for our Sunday touch football games. Natural barriers on both sides, no traffic, just about the right length. True the cobblestones made the occasional hard landing hazardous, but all in all it served the purpose very well for the few years I and my posse were still capable of such strenuous activity. Left the city in 2006, and I understand from this piece it’s now all residential. Who’d’ve imagined such an urban curio going all trendy based on what (and pix capture my memories of it perfectly) I stumbled on more than thirty years ago!

Have lived in NYC all my life and just discovered Collister Street today on a walk back from William St–just when I thought I knew all the alleys and one-street streets of Manhattan. Your photos and accompanying text are great. Thanks.

My ancestors lived at 4 Laight St in the 1800- 1850s. As children we heard that there was an American Express building on the property. It’s amazing to discover the Amex symbol on your site & realize the connection with my ancestor Margaret Van Surlay (Surlee, Surley, Sourley).