While meandering through eastern Bushwick, dazed by the unbearable 80-degree heat in the late summer of 2011, I was pleased to find something I hadn’t previously known about: the almost-garishly turned out Engine 252 on Central Avenue at Covert Street, which is also covered in red paint, something also guaranteed to attract. When Bushwick was burning down in the post-blackout years of 1977-1985, this firehouse was called on innumerable times to douse neighborhood fires. The squad also lost six members on 9/11/01. 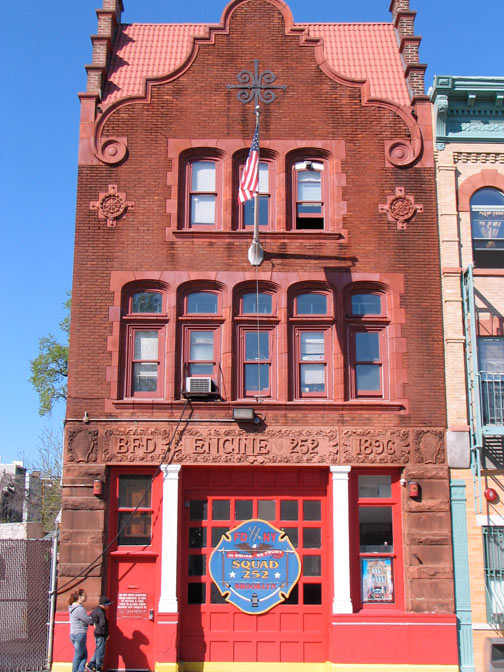 The Brooklyn Fire Department commissioned a new firehouse for Engine 52 here in 1895, and the famed Parfitt Brothers architects designed the firehouse, featuring a Flemish Revival stepped roof and front gable. Engine 52 opened for business in 1897. For 22 years the firehouse employed horse-drawn wagons for calls; mechanized equipment was adopted in 1919. The firehouse joined the FDNY in January 1898, after Brooklyn consolidated into Greater New York. 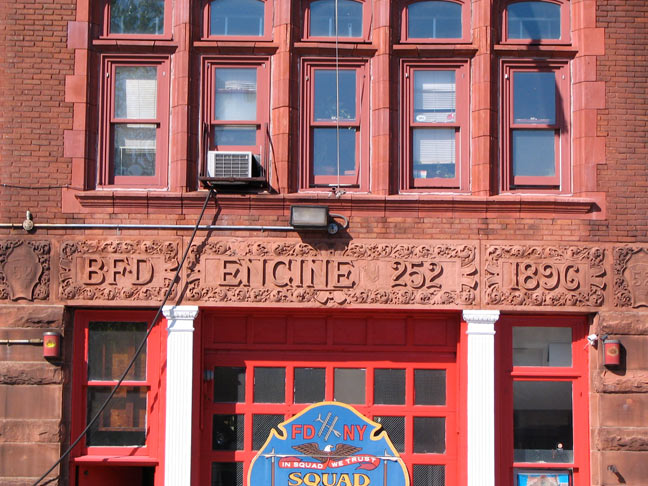 A close look at the shields on either side of the “Engine 252” entablature will reveal the number 52. The firehouse was established as BFD Engine 52, became Engine 152 on 12/1/1899 to avoid confusion with another FDNY Engine 52, and became Engine 252 on 1/1/1913 when Brooklyn and Queens fire companies adopted the numeral “2” as a prefix. 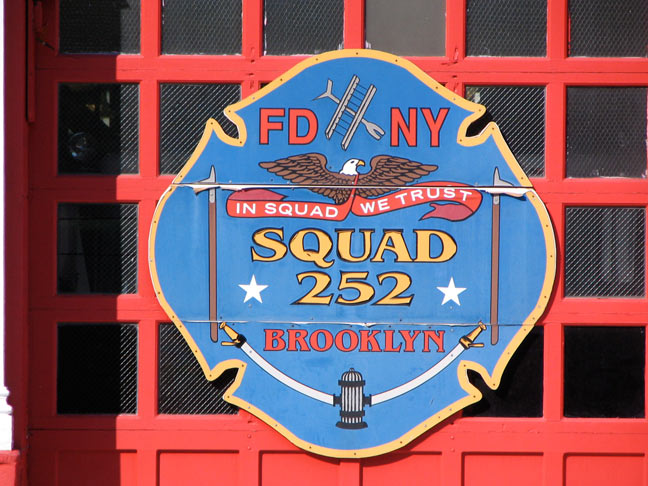 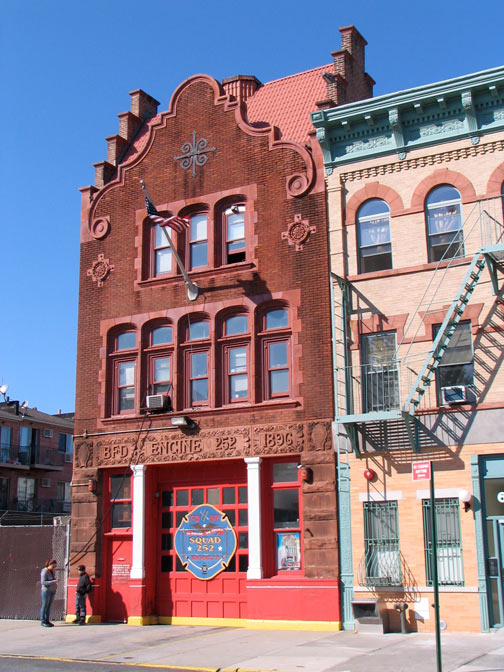 252 has been stalwart against fires for over a century. Its eye popping design is just an ancillary feature. I hope it’s never altered.

I wonder if this firehouse tends to my area although its queens. Living in the nook of Glendale right on the borderline makes things quite confusing. ESP when this is just a few blocks away with a Diff zip code.

“Unbearable 80 degree heat”?! I guess you won’t be visiting Arizona in your lifetime.

I am exaggerating, though my preference for bearable daily high temperatures of between 55 and 70 is well-known. Arizona? ugh.

So I guess you won’t be visiting me in Florida during the summer. We hit the 90’s regularly in July and August.

Not a hot weather man. I haven’t been shirtless on a beach since 1976 when I got a blistering sunburn. Put me in Hawaii or any tropical location and I wouldn’t know what to do.

Scootch under a palm tree with a pina colada and you will be set.

Ugh?! This week AZ has been in your preference range. As soon as JFK resumes operations come & visit us

It’s a lovely state I’m sure but with Phoenix etc. over 100 degrees most of the summer …

As a squad company, 252 covers quit a large area and does respond in to Glendale and quite a few other areas of Queens as well.

Wonder of wonders!!!!! this most unique, fascinating, always delightfull ‘bagdad on the subway’ adventure never fails to enchant. one of the best things on the entire worlds wide web.
NYC owes a debt of gratitude to ForgottenNY!!!!

I have the original drawings. Check Pintrest “vintage nyfd firehouses”

How do you feel seeing a 252 shield in the opening of the new CBS show 911 Lone Star?

Born & raised in Brooklyn. Lived at 592 Central Ave, Always remember the Firehouse 252 on Central Ave, Attended FHM School on Central Ave
only a block away from the Fire House. Often during class we would hear the Fire Trucks racing off to respond to a call. The Nuns would tell us to say a silent pray for the firemen and the people they were racing off to help. I never forgot that, and I still say a pray when ever I hear a Fire Truck racing off to respond to a call, been doing that for the last 69 years and will continue to do it forever. God Bless the men & women who choose a career as a Fire Fighter.