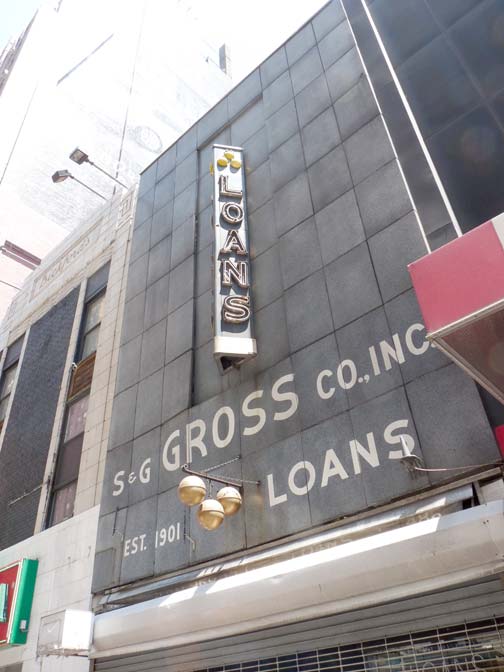 Passing by on a Saturday, I had thought pawnbroker S & G Gross had closed, but actually it’s not open on weekends. It even has a web presence and, like the sign says, the outfit was established in 1901.

The three golden balls that signify the pawnbroker was a symbol that developed in Lombardy, a province in Italy, during the medieval period. The “balls” were originally gold coins, according to one line of thought, that were made into spheres on shingles that were hung above pawnbroker shops.

A WALK IN FAR ROCKAWAY, Queens

The three gold balls are also associated with St. Nicholas (yes, THAT St. Nick) who is patron saint of pawnbrokers, among others. He supposedly gave three gold balls/bags of coins to the three daughters of a poor man, so they could afford to get married.

Still,others believe that the 3 balls are somehow connected to the Demedici family,whose family crest is adorned with 3 gold balls–aye,my hearties,and I alone lived to tell the tale

There was a music-hall comedian in the UK in the WWII (and just before) era named Max Miller, the “Cheeky Chappy,” who did humor that was risque, if that’s the way your mind ran, and one of his jokes was about having to go to the pawn shop to scrape up a few pounds so he could take his girlfriend out on a nice date, and his surprise when bumping into her as he was walking out the door: “So, I’m leaving [as above] and she was so glad to see me, she kissed me, right then and there– under the (*PAUSE*) … awning! It was raining! Oh, you people– you have such filthy minds! I’ve a good mind to report you to the management and have you banned!”

I remember going their around 1963 with my mother when she purchased a preowned, err used, Smith-Corona portable typewriter for approximately $20.(A huge sum back then). After the purchase, we stepped right outside to get the #10 bus uptown to 116th Street.

This building was torn during late spring 2018. It was closed and had scaffolding for a long while, then it seemed like the NYFD was using it as a training center for how to deal with smoky and derelict buildings and then finally it was torn down. What is going up there instead is anyone’s guess as the land is now vastly more expensive than it has ever been…