Previously, the east end of Manhattan Beach had been occupied by the US Coast Guard and US Merchant Marine.

This 1924 aerial view shows the peninsula partly developed. The Manhattan Beach street grid had been developed for about 20 years by that time.

By 1951 the Coast Guard was in control of the east end of the peninsula. 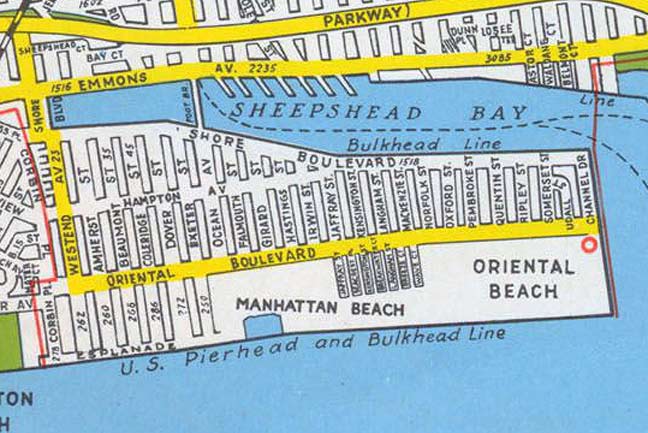 1949 Hagstrom map showing the Manhattan Beach peninsula. Today, the street grid runs as far east as Pembroke, with Quentin on the KCC campus. I am unsure if Ripley, Somerset, Udall and Channel Drive ever existed past the planning boards. 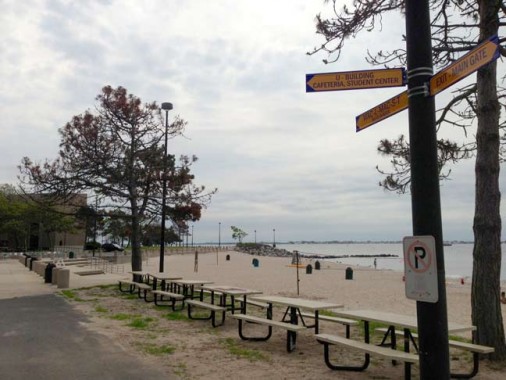 The little-known beach on campus makes Kingsborough the only college campus in the state of New York with its own beach. Students serve as lifeguards. 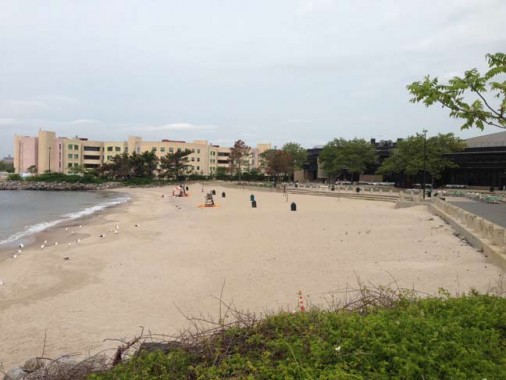 A panoramic shot of the beach. In the background is a senior home shoehorned between KCC and Manhattan Beach Park. 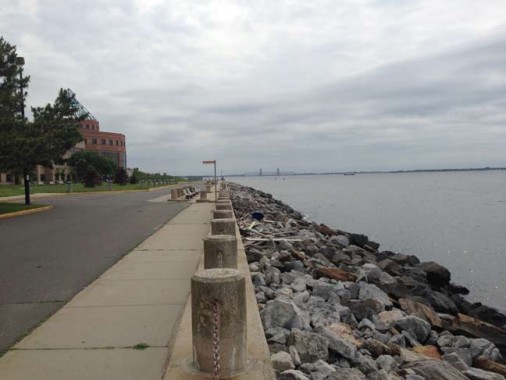 Most of the KCC shoreline is a concrete bulkhead with riprap to hold back the advancing sea. The southern shore of KCC appears on old maps as John Barry Boulevard, named after the Revolutionary War naval commander. The first American to attain the rank Commodore. The title was no longer assigned after 1947. 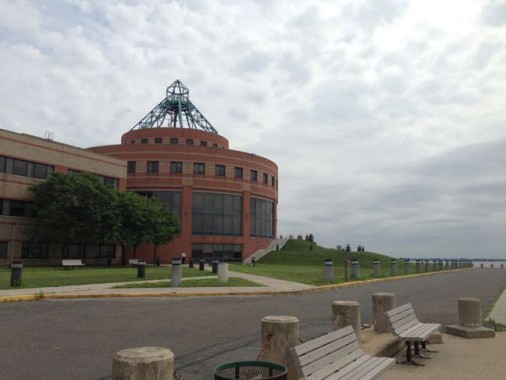 The MAC (Marine and Academic Center) completed in 1991 features the city’s newest lighthouse. It is located at the eastern tip of Coney Island. While its western tip in Sea Gate was historically called Norton’s Point, the eastern tip never had a formal name. Until the 1940s, this tip was a sand spit that extended further east into Rockaway Inlet. Currents from the east continue to move the barrier island and peninsulas of the south shore, as seen in the gradual westward drift of Breezy Point and Fire Island. 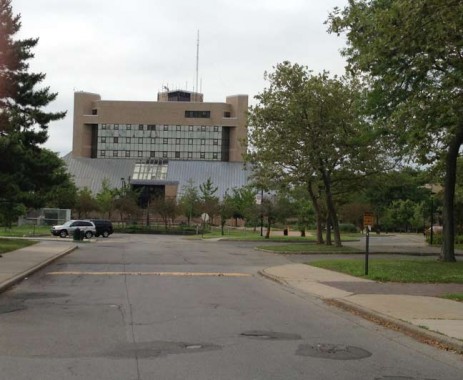 The Library building is the tallest structure on campus. 1970s modernism. 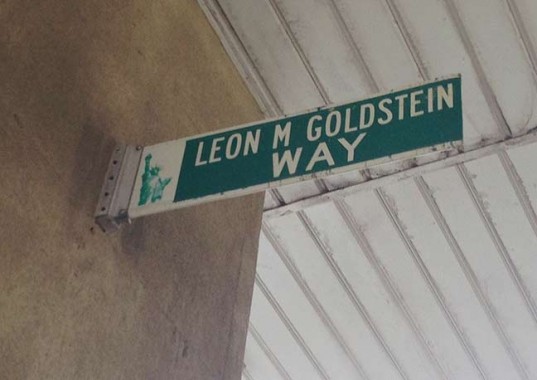 Leon Goldstein was the founder of KCC and strong voice for the expansion of CUNY. 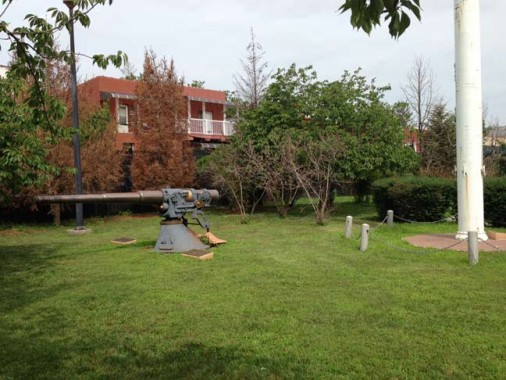 Monument to the Merchant Marines, who occupied the campus before it was a college. Although Manhattan Beach never had a fort, many of New York’s points and capes had military bases to discourage the British from returning. 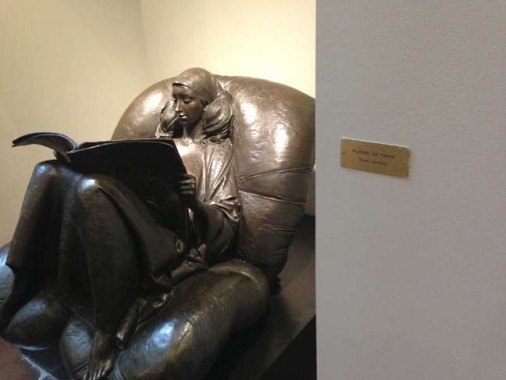 Public art inside the MAC by Bruno Lucchesi. 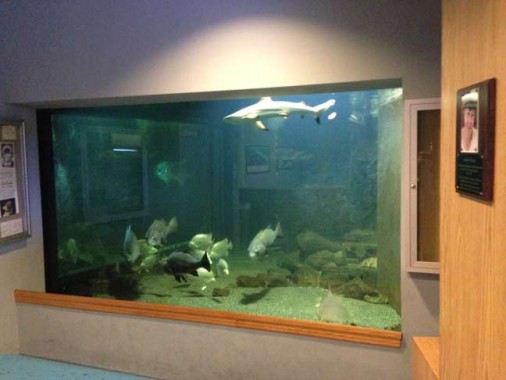 KCC is the only CUNY campus with its own public aquarium. Meet the harmless sand shark! 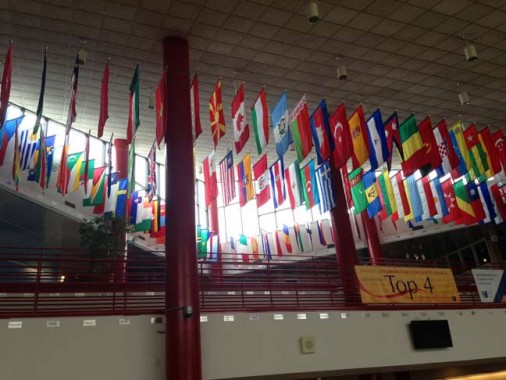 York College and LaGuardia Community College also have them:  a hall of flags to celebrate a diverse student body. The KCC flags hang above the cafeteria. Among the flags are the UN (not a country), Kosovo (not fully recognized) and Palestine (subject of a longstanding dispute). Also, non-sovereign lands like Macau, Puerto Rico and The Sioux Nation. 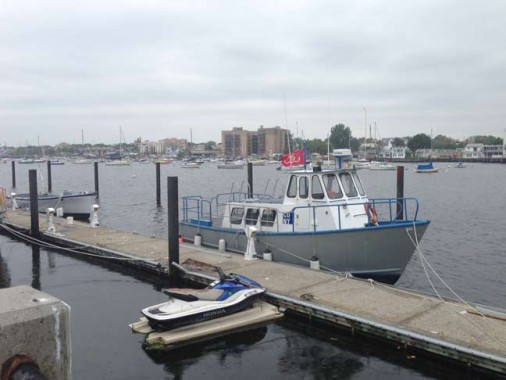 KCC is the only CUNY campus with its own seaworthy vessel and on-campus marina, located on Sheepshead Bay. 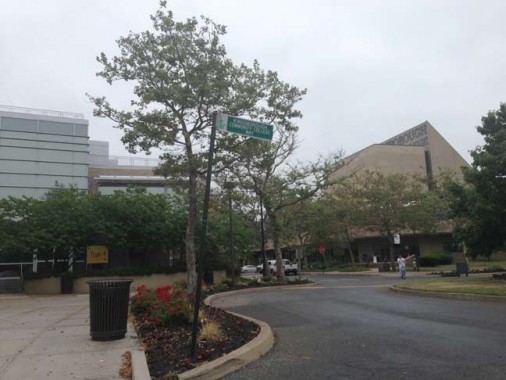 Kingsborough Community College Way used to be Quentin Street, the last on Manhattan Beach’s alphabetic street sequence that begins with Amherst, Beaumont, Coleridge, Dover… Not to be confused with Quentin Road, the ‘Avenue Q” of Brooklyn. For the neighborhood’s planners, Q was not the end. A never-built Reynolds would have been the tip of the neighborhood. It was never built. Outside the campus, the last public street on the Manhattan Beach alphabet is Pembroke.

[Ripley shows up on maps, not Reynolds, but as I suspected those streets were not built.  –ed.] 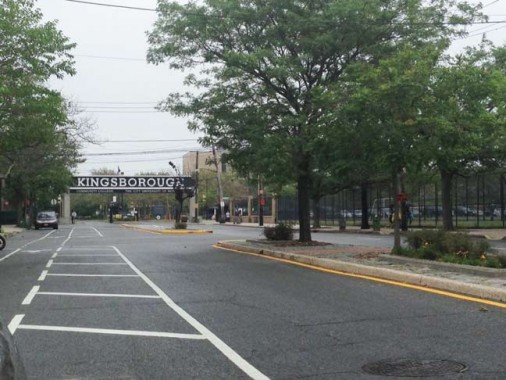 The dramatic entrance gate to KCC marks the eastern end of Oriental Boulevard, the main drag of Manhattan Beach. Once lined with resorts, it also leads to Manhattan Beach Park, one of the city’s smallest public beaches. 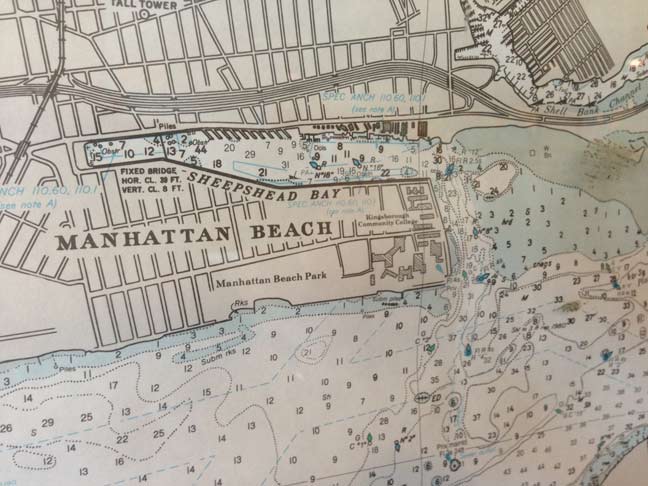 The nautical map has numerous shoals surrounding the tip of KCC, some are long-gone islands drowned by the currents. Perhaps soon, I’ll explore another overlooked tip of land in our city or college campus. Any you would recommend?

Sergey Kadinsky can be contacted via facebook or at mazeartist@gmail.com

Just looking at the old maps, I can remember as a child fishing on the Emmons footbrige with my Dad during the winter, and brining home catches of whiting and ling. And the cold could be bitter, but blessedly there was a fishing ‘shack/snackbar’ where the Old Man would get me hot chocolates.

Crooke’s Point on S.I. which was created as part of Great Kills Park.

Here is a link on the history of Crooke’s Point:
http://www.silive.com/southshore/index.ssf/2011/12/shifting_sands_of_time_not_a_f.html

“Perhaps soon, I’ll explore another overlooked tip of land in our city or college campus. Any you would recommend?”

SUNY Maritime, and cross two off the bucket list?

Attended KCC 1969 to 1971 before the permanent buildings were there; just temporary ones left from the Merchant Marines….who took it over from a small amusement area left from the Oriental Hotel days. A vacant Bar, sagging buildings and a small bandshell was still there from before the Merchant Marines. Great sight lines of the water, not like today.
Back then the legend was John Phillips Sousa played at that bandshell; he did write “Manhattan Beach March” and spent time there. Sure wish I took pictures!

Next stop for me was UCLA ” University Corner Lexington Avenue” (Baruch), but that is not an interesting campus to explore!

I attended KCC from 72-74. Even then it was the old Quonset huts. Transferred the 64 credits over to UCLA and ultimately got a BA in 76.

1976 alumni A.A.S.
1979 BARUCH B.B.A.
I remember kingsborough going into the barracks in the freezing cold and trying to study and listen to the teacher’s lectures

I believe the Air Force also used the site as a reception station or some other function during WWII and perhaps also late 40’s, early 50’s.

I would offer, ideally, that you explore the Esplanade there but, now it’s probably washed away, and privatized. I have faint memories of walking on that path.

Thanks for this fascinating piece. I think it is a great campus and having a beach is fantastic…really appreciate your story.

I lived in a Quonset in 1947. My father was an officer in the Navy during WWII. He had just gotten off active duty and we were awaiting an apartment in Parkchester, which was not yet ready. Only good thing I remember was that my Grandparents, who lived in Rockaway, would visit us often.

There is also a beautiful and very exclusive Public High School on the Campus called the Leon M Goldstein High School for the Sciences (you need very good grades to be accepted). My daughter will be going there in the fall.

I remember Goldstein big heavy set guy. They called a kingsborough Country Club back in the day

i attended kingsborough community college when they were just baracks… 1972-1975. where are the photos.

YUP Remember No heat in the barracks

I was stationed at Manhatten Beach Air Force Station as an eighteen old airman (the current site of KCC) from late 1955 to part of 1956. The mission of this facility was to process airmen leaving for overseas assignments and coming back from overseas to be discharged. I was a medic and part of the team that performed the examinations of these airmen. We also had a small medical clinic for the airmen who worked on the base. I remember the beach outside the base but never used it. The transit bus came near to the entrance to the base and you could take it to the subway station at Sheephead’s Bay or Brighton Beach. I attended night school at Brooklyn College and had great experiences in Manhatten. This was my introduction to NYC and I’ve loved it ever since.

I lived on Beaumont St. during the 1940’s. After the War ended, I remember walking to the “Base” and digging with friends in the earth embankment that served as a target area for a shooting gallery. We recovered many of the old bullets lodged deep in the bank, and used them for lead sinkers when we fished in Sheepshead Bay.

I had my ups and downs there. Sometimes those “young cozy moments”.

I spent several days at Manhatten Beach Air Force Station in July 1957 while awaiting deployment to Europe. At that time the USAF station servered as short term quarters for that purpose.

A community college is a much better use of that property.

– an old veteran who remembers well.

I attended Leon M. Goldstein High School from 1999-2003. Up until my senior year, we attended almost all of our classes in the barracks and traveled from building to building throughout the day. When it rained, wooden boards would need to be put out as makeshift bridges so we could enter the buildings. It wasn’t until the 2002-2003 school year that a formal school building was built. I never knew the history of the land, so it’s nice to know now.

I was briefly stationed at Manhattan Beach Air Force Station in late June-early July (about a week) 1957 to have my orders processed for assignment to an Air Force communication squadron in Germany. I was 18-years-old and it was during the Cold War. I was pulling detail at the band shell at MBAFS when I heard my name called over the loud speaker. My heart raced faster than a Whitey Ford fast ball because the call meant they were ready for me to head overseas, my first time abroad. Soon our group boarded an Air Force bus to nearby McGuire AFB, NJ. Next stop was Orly Field, Paris.
While at MBAFS, I visited Coney Island. One afternoon, an airman came through the barracks and asked if we wanted to go to a baseball game that night. He didn’t have to ask twice to two baseball fans. We took the subway and watched the Brooklyn Dodgers and the New York Giants play at their famous Polo Grounds. We saw many of our stars from childhood, but we didn’t get to see Jackie Robinson because he retired at the end of the 1956 season. It was an historic time because it was the last season that the two teams played in New York because the next season they were in California.
A few days before I arrived in New York, I recall leaving my hometown of Hot Springs, AR by train with a duffel bag and an AWOL bag dressed in an Air Force uniform. I arrived at one of the train stations in New York City without a GPS. Here I was, a teenager, walking downtown in New York City, gazing at the tall skyscrapers, looking like most first-time visitors to the big city. My GPS was “ask people how to get to MBAFS.” So,I did and the people were very nice and helpful. I think they said take the BMT to Manhattan Beach. I had no idea what BMT meant, but I followed their direction and arrived on time.
Just recently, a friend of mine mentioned that he grew up near Manhattan Beach and told me a little history about the area. He said the band shell was used by Sousa and other great band leaders. And one day back in 1957, I had actually worked at that band shell. Good memories.