Brooklyn Heights Cinemas is probably one of the more unassuming movie theater buildings you will ever see, occupying a landmarked brick building constructed in 1890 at #70 Henry Street in Brooklyn Heights. In an era that has seen theater after theater close, leaving the remaining ones as 10 or more screen behemoths, BH Cinema has stayed true to the neighborhood theater model that did just fine for decade after decade.

Needless to say, developers have been circling it like sharks (the only reason it still exists is that the building it is in is landmarked and it has had a dedicated ownership.

Since I went to college in the neighborhood and worked in the Brooklyn Business Library a block away (which itself is moving) I must have been in here a few times, long before I was paying attention to Forgotten things. It’s up to the Landmarks Preservation Commission to make sure this place isn’t added to the list of forgotten buildings. 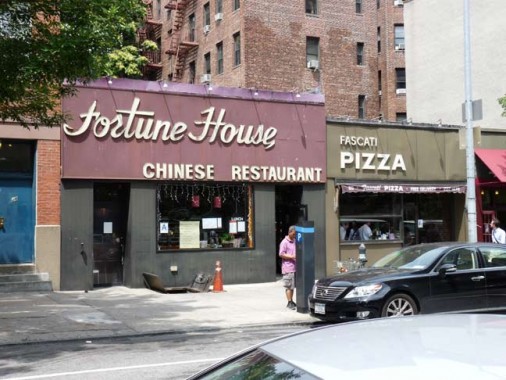 What looks like an old-fashioned chow mein-chop suey joint a few doors down.

Haven’t been to the BH cinema for years, but in the 1990s the only consessions were vending machines, which we found very disappointing.

Look at the Cobble Hill Cinema when you have a chance.

Fascati Pizza has been at that location (with the same sign) since at least 1973. The interior has been renovated since my days (1973-74) of passing through Brooklyn Heights.

I saw Saturday Night Fever in this theater in the 70s. My familiy lived in 20 Henry at tthe time.

We ate many pizzas from Fascati’s.

The only time I ever came here was not that long ago to see Battle for Brooklyn, but that’s about it.